The film, Process, is supposedly following an actress who has had a breakdown and embarks on a sequence of extreme experiences – her ‘process’ – before committing suicide. Things did not start well. As a crowd of cinephiles sat reeking of dampness in the Filmhouse auditorium on a soaking wet night the producer came forward to explain to us all before the film began that due to a mix-up we had the French version, sans subtitles. However as the film had only a few lines of dialogue this shouldn’t be a major problem, but he would explain a couple of scenes with dialogue just so we knew what was going on. He proceeds to outline several key scenes in the film before we see it, prompting one audience member to shout ‘can we just see the film?!?!?!?’ – and rightly so. Subtitle problem aside I don’t want someone telling me the key scenes (including some of the final ones) before I watch the movie. Hell, I don’t even like to read the text on a work of art in a gallery until I have had a chance to look at the piece myself and place my own interpretation on it.

The film is non-linear and is, frankly, a bloody mess. In fact, if the producer had not told us about some of the scenes I wouldn’t have known what the hell was going on, and I’m not exactly a person who struggles in the language of cinema (the cynical may think they deliberately engineered the non-titled print so they could explain this badly edited film). The non-linear chronology of the scenes would have been fine if there was sufficient anchorage to let the audience know what was going on. Instead we had effectively a pile of montages, overlapping scenes which were largely disconnected. I realise this may be to suggest the mental state of Dallé’s character, but as we have no emotion or characterisation it is impossible to give a damn what is going on. Some of the images are nice to look at, but the entirety looks very like the effort a 2nd year art student with more pretensions than skill would produce. It raids the French cinema cliché cupboard. Everyone is immaculately dressed, lives in designer apartments and smokes and pouts in silence, or with only the plinky piano accompaniment. And the frequent flashing up on the screen of the Process logo just re-enforces my impression of a dreadful student film. Truly awful and exactly the sort of pretentious and interminably tedious film you should avoid at all costs. Also exactly the sort of film where the makers will no doubt react defensively and say ‘you don’t understand it’, which is the defence of many poor artists. I do understand it – it’s just so badly put together and awfully edited that is utterly awful. Doesn’t help that in one scene in the designer home with the floor-to-ceiling windows framing our heroine (the director obviously wants to be Michael Mann here) you can clearly see the reflection of the camera crew. And free tip to the director: if you are attempting to show a specific ‘process’ the character has decided to go through deliberately, regardless of whether it is eating powdered glass or degrading, dehumanised sex, you need to show the choices and reasons, not just the scenes of the actions – how is the viewer to know she has chosen these? And as for the frequently over-long single-takes – have you never heard of the Miracle of Metonymy? Avoid.

Far finer was the low-budget horror Skinned Deep by Gabriel Bartalos. Made over a fair old length of time by Gabe and a bunch of friends whenever they had the time and the money this is, at it’s heart, an old-fashioned horror of the type I adored back in the original video boom of the early 80s, before asshole MP David Alton rode the popular tabloid folk devil of ‘evil video nasty made kids kill’ sensationalism to censor them into extinction. The all-American suburban family on holiday driving across the land break down in rural America. Now all of us know that this is trouble because Rural America is full of cannibalistic, chainsaw-wielding in-bred families (this may be part of the classical rural-urban binary opposition mythology, except in Missouri where it’s all true) and so will end in tears. The ultra-sweet old lady who runs the local diner – how lovely and polite, if a little backward. Come back to her home for dinner? ARE YOU CRAZY?!?!?! Of course our nice family are and soon we are being introduced to her family – Brain (dungarees wearing hick with, well giant brain; Plates (a plate-throwing deadly dwarf!) and the Surgeon General with his huge metal jaws. And an oldster gang of Hell’s Angels called the Ancient Ones who get involved later on (including SF fan legend Forrest J. ‘Forrey’ Ackerman). 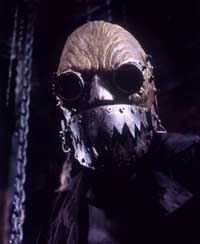 Yep, it doesn’t take itself too seriously – this is a labour of love. Gruesome and mutilating love perhaps, but love nonetheless. It’s the proper old horror which actually has HORROR in it, as opposed to the toothless ‘horror’ films we’ve been fed by Hollywood studios masquerading as ‘independents’ and giving us post-modernist, slick films which pretend to be horror but are barely thrillers and so tame to those of us who grew up watching I Spit on Your Grave, Cannibal Ferrox, The Hills Have Eyes etc (and grew up to hardly mass-murder anyone at all, thank you Mr Alton – gee, think maybe it wasn’t the movies which twisted us kids?). Made by begging, borrowing or stealing this is a hugely fun film, following in the fine footsteps of Sam Raimi, both in some filmic touches but also in the way it was made (Sam working with friends, selling is car to raise money etc) or Romero when he made Night of the Living Dead (give me some money and you can be a zombie!). Take the word of an old gore hound – those of you who loved Evil Dead and the others of its ilk will love this. Horror and humour well mixed and with plenty of nods to other films and to the dedicated horror audience.

Better was to come though. There was a Q&A afterwards, as is common in the Film Fest. Gabe regaled the audience in the lovely Cameo cinema with tales of how the film came together over a couple of years (the branding session at the start is apparently real) and how the actor playing Brain didn’t hold it against him when they shot the scene of him streaking down a busy New York street. Alas, as underground movie-makers they had no film permit, they just drove to a location, quick shoot, grab him back in the truck and off to the next. Except as he streaked along one street he was nicked by the local coppers and huckled off to the clink! Trust me, if you only see one movie with an inbred, murderous hick with a giant external brain streaking joyously down a NY street, make it Skinned Deep. I joined a few others and the very friendly and extremely approachable Gabe in the Cameo bar afterwards and had a good old chat with him. He’s a lovely bloke who basically has the philosophy of making the film you want to see yourself, not one which will ‘make your name’ or whatever, which I respect enormously. He’s worked with Tom Savini and a host of others (including Warwick ‘Willow’ Davis who stars as Plates – a wonderfully funny but nasty camp turn played straight). No British distribution deal yet, so you’ll have to watch for film fests around the country to have a chance of seeing it. Hopefully it will get a deal and a DVD release – it deserves to be a cult hit. There is a section on the film on this website here. 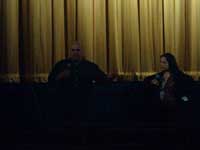 Gabe talking at the Cameo after the screening of Skinned Deep

Afterwards I was somewhat hungry after all the exploding heads, removal of limbs etc and ambled across the road to a nearby café for a late lunch. A gorgeously bright Sunday afternoon, sitting at a table outside a nice café, idly flicking through the Sunday papers, sipping coffee, munching on a lightly toasted Panini and basically watching the world going past – a very simple yet very great pleasure. Good movie, chat with a really nice director and a relaxing lunch. Sometimes life is a pleasure. Finished it off with a nice ramble round some second hand stores and picked up a cool Blues anthology for four quid, with Muddy Waters and Robert Johnson on it.

Tuesday night saw Gordon and myself off to watch another almost home-made movie – the ultra low-budget ($7000!) SF film Primer. A bunch of geek engineers (who obviously buy their clothes at the same store as Dilbert) tinkering with gadgets in their spare time in a garage (Linus, I’m thinking on you here, for some reason!). Two of them finish tinkering with a device – unsure as to what exactly they have built and what application is may have if they sell it they experiment. Eventually they discover that the machine is having a temporal effect of some sort. How could they use it? What effects would it have? Okay, so some images are not the best – evening scenes are grainy because they didn’t have access to the right equipment for night shooting and some indoor scenes have everyone in a blue or yellow-tinged light because the chum shooting obviously hasn’t been trained on how to use the white balance settings on the camera – but for a movie, again shot over a fair old period of time by mates, made for $7k it’s impressive, if sometimes confusing (but anything to do with temporal tinkering always is confusing).