I had a nice start to my two weeks off – two weeks away from Bastardstone’s, hurrah! – by having a fun weekend. Unknown to me some of the old gang from back home (very old gang – we were all at school together and that was so long ago we used slate notebooks and wrote in Latin). Mostly unknown to me because forgot to tell me that Colin, Malcolm and Rhona were coming through for the day until he remembered to phone me while indulging in some open-air, boozing al-fresco at the Pleasance. Caught up with them after fighting my way though enormous crowds of tourists, Fringe goers and the early evening Tattoo crowd near the Castle.

Those of you who don’t live in Edinburgh can’t imagine how busy it is right now – most city centres are busy on a Saturday, especially on a warm, sunny evening, but this is something else during Festival time – there are actually queues of people trying to get into dozens of restaurants while you have to push your way through lines of people waiting to get into Fringe venues who appear to have forgotten that other people may want to use the pavement. Polite behaviour goes out the window at this point and having to employ rather rude pushing techniques of the type favoured by young Italian tourists is required in order to get more than a few hundred yards in an hour. Met up with the gang at the Pear Tree eventually and through the miracle of mobile phone text messaging my beer was waiting for me when I got there – isn’t technology wonderful?

I hadn’t seen them for ages, so it was a nice surprise to meet up and, well, frankly, get utterly pissed with them all. With the massive lines at most diners and restaurants we were getting perilously close to just getting a bag of chips and a bottle of wine from the offie and sitting out in the Meadows, but we moved further down the South Side near to my last student flat (a previous lifetime it seems now) and eventually found the Sombrero, which, as you may imagine, was a Mexican restaurant. We got lucky and managed to get a table, fortunately not too close to a rather ebullient group of very large, blonde men from , who our gorgeous waitress told us had been there for three hours of eating and drinking! Still, they were the happy drunks rather than the annoying or nasty ones and didn’t bother anyone. Big Mexican meal (loved the tricolour on my food made out of salsa, guacamole and sour cream – neat) with plenty of chilled margaritas later and we’re feeling pretty good and ready for more drink. Whistle Binkies is very central so you’d expect it too be over-burdened by tourist and Fringe groups but as it is a tiny entrance leading down under the most don’t know it is there, so down we went for more subterranean boozing. We saw our chums off on the last train home, skirting the huge groups of teenage Goths (I should say pseudo Goths as most of these pretty but pouting teens don’t even know who the hell Andrew Eldridge or the Sisters are and certainly can’t wear a puffy-sleeved pirate shirt with the same panache I can (but who can, eh?)) milling around Waverley station – it looked like a Slipknot or Manson junior concert had hit town. After 11, so still early for Edinburgh and off and I go as the gang leave on the Glasgow train and hit the nearby Malt Shovel for more drinks and finally the rather good night bus service home in the wee small hours – Edinburgh has a good night service for piss-heads and as the entire double-decker is full of drunks entertainment is all-but guaranteed (and the drunken antics of fellow passengers at 3am are often more entertaining than many Fringe shows).

After sleeping off my hangover called to say he was taking his dog for a walk down the beach at on Sunday, so I hitched a lift. At this time of year we often discard our shoes and have a nice paddle as we amble for miles along the curving beaches, but with the recent huge storms which hit all over the UK (and indeed are still hitting even today – my poor cousin June has had her lovely old thatched cottage ruined by floods) things were a trifle stirred up – much of the beach was festooned with huge amounts of stinky seaweed, massive amounts obviously brought in by the storms. Worse still there were dozens of those evil little bastard jellyfish marooned on the beach and more driven into the shallows of the surf, so paddling was not really an option. Damn those pesky jellyfish for ruining my paddling plans! I stopped at each beached critter and berated them at length. Some people think this is odd behaviour, but then my colleagues thought it odd that I was singing ‘blue cheese’ to the tune of ‘blue moon’ (Blue cheese, you saw me standing alone, you made my breath so stinky…) as I sliced up the offending smelly fromage for my lunch last week. Odd is good and I doubt I am the only person who sings to my lunch. And if I am I think that’s to the detriment of those who don’t.

On the way home in the evening we took a detour down a side road in East Lothian and visited Chester Hill Fort, an Iron Age Celtic hill fort. It’s rather odd as you have to go down a small road and walk past a farm house to get to it, then through the stile and past the grazing cows to get to what is left of the hill fort. From a distance it looks like an overgrown small hill, albeit with less vegetation than the larger one next to it. When you get closer to it you can see the shape of defensive ditches and earthen ramparts beneath the grass and large amounts of cow dung which I believe was of comparatively more recent vintage than the Iron Age (phew, stinky). It’s a little odd as the location is next to a much higher hill, so archaeologists are puzzled as to why they Celts of the time chose to build on the lower hill, leaving the settlement overlooked by a taller piece of nearby terrain. In addition to the multiple ditches and ramparts and the steep slope the fort would originally have had a rough, wooden stockade and probably a palisade around the buildings inside. Now only some loose stones and rocks from the foundations are visible and the undulating outlines of the earthen works, still clearly showing the outline of this fortified dwelling. It may not look much – and perhaps you can’t make out any of it in this picture – but considering that this has been here for more than two thousand years I think it is impressive that our long-departed ancestors have still left their mark in the very soil of the land for us to gaze at.

From the top the view is clear across the relatively low, flat fields right out to the nearby River Forth and down to the hill outside . Any raiders by land or from the sea would be spotted miles away. Little wonder that this style of fortification would be employed for thousands of years, right up to the medieval period – with mot and bailey constructions on similar sites throughout for thousands of years until they were replaced, often on the same strategic sites, by the mighty stone castles which also litter our landscape. I think we are incredibly lucky to live in a land which offers us so many millennia of history right there on our doorsteps – I can pass a 19th century home where Robert Louis Stevenson lived or an Iron Age fort all within a few miles of each other. 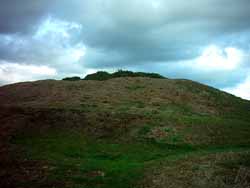 The only fly in the weekend ointment was a call from the Film Festival to tell me that 2046 had been pulled at the last minute as the director wanted to make further edits. He’s already done this at a couple of other recent film festival abroad, which is a bit worrying. So the last night film has been replaced with a movie whose name I can’t recall, but is an Asian take on an old film Noir, so I reckon I’ll just hang on to those tickets and go along anyway. To make up for it on my visit to see I, Robot this afternoon (actually quite good – better than you may think, but not up to the standard of Proyas previous efforts such as the superb Dark City) I booked a pile more Film Festival tickets. It kicks off in a couple of days and my first Film Fest screening is Tokyo Godfathers on Thursday night, a feature-length anime from . As I get two-for-one discounts I picked up a ticket for , who as we all know, is actually an anime character himself (hence his terrible phobia of erasers and white spirits). So I now have a goodly number of flicks from around the world to watch in the next couple of week, on top of the regular releases I’ll catch too – may the Great Penguin rain down her blessings on the person who invented my film pass