Yes, I’m chipping in my tuppence worth even although it has been all over the media this week. And rightly so – this is something that should be all over the media. Every school child should know about this moment. I’m certainly not one to glorify war, as I think most folk who read this will know. I often despair that in the 21st century we still use warfare to ‘solve’ problems (of course it rarely does). But this is something else.

From this distance, even to those of us familiar with history, it looks like a hard-fought but inevitable victory by the good guys over the forces of darkness. It wasn’t. Overwhelming force there certainly was: walls of attack aircraft roaring almost unchallenged over the French coast, thousands of ships from landing craft to the leviathan battleships of the Royal Navy and tens of thousands of men. They came from every corner of the British Isles. Men from the Highlands of Scotland to the rugged coast of Cornwall. Ulster men and Londoners. Men from Manchester and Yorkshire, from rural Britain to the industrialised Midlands. From all over the British Commonwealth and Empire. From Canada to New Zealand. The American G.I.s came in their thousands, most untested in combat but gung-ho nonetheless. When it came to the crunch on Omaha and Utah beaches that brash optimism was bloodied severely but those men from rural Pennsylvannia and downtown New York stood their ground. And there were those who had come to Fortress Britain to add their weight to the fight. The Free French were there. So too were Poles, Czechs and Norwegians and so many others.

Imagine for a moment. The cool of a summer morning dawning around you. The breeze from the sea brings you a tang of salt, the sound of seagulls screeching, driving away the odour from too many men in an enclosed space, many badly seasick. The early morning mist is ripped apart by the sudden onslaught of multiple rocket launchers and the heavy thunder of the enormous guns of the greatest fleet in human history opening fire. The landing craft lurches to a halt and the door falls down. A rush forward into the surf – if your lucky it’s up to your knees, for many it was over their head. The metallic ‘spang’ as bullets bounce from metal, the soft thud as it rakes wet sand and the obscene sound as they rip through human flesh. Your mates going down around you, maimed, killed, screaming for their mothers. And still you keep going and so do thousands of others, charging the beaches into a hail of fire, heading right for the centre of the inferno.

What sort of courage moved in the veins of those men? How on Earth can anyone dare to undertake deeds like these? But they did. Last week I compared the mythologizing of the war of Troy into the Iliad to the D-Day landings. Look at the deeds these people wrought and tell me that they are not now legend.

We are guilty in Britain of looking back at the Second World War sometimes with too much nostalgia, reliving what Churchill with is gifted rhetoric called ‘our finest hour‘. But I think on this special occasion we should allow ourselves some small measure of indulgence. There are few nations who have been tested in fire in quite the way the British of that period were. The United Kingdom has never been so united as it was then. Gardners ‘digging for victory’ over the land, women taking on jobs in factories, miners bringing out record amounts of coal, merchant sailors braving U-Boat waters, sailing ships built by the men of Glasgow and Newcastle. People sacrificed railings to be melted down to make weapons, whole towns saved money to sponsor their own Spitfire. When the Supermarine factory was bombed Spitfires were soon being built in other places, even biscuit tin factories. The Nazis could not believe how quickly the British workers could replenish the lost aircraft. Ordinary civilians suffered dreadful bombings; London blitzed, Glasgow’s Clydebank firebombed, Coventry almost wiped from the map. And they took it. It seems almost unbelievable to us, but these people just would not break. The men who stormed those beaches on Normandy fought for them with that same determination not to fail, not to break. They also fought for us, the generations who came after them. Their blood and bayonets shaped the free world we grew up in. They walked into fire and shattered a monstrous evil through Herculean efforts. Men charging the beaches, sailors raining down fire to support their comrades and the Great British Boffins creating the unbelievable spectacle of floating harbours – known as Mulberries – to sail across the Channel. Incredible bravery backed with desperate ingenuity.

I found it worrying however that a viewer’s poll on the dreadful Channel 5 found that the bulk of their viewers thought that the German Chancellor should not have been invited to the anniversary in France. One of the less inspiring attributes of the British, our xenophobia (although our French cousins are pretty good at it too). Now, apart from the notion of forgiveness and the fact that many young German boys lost their lives too there is the fact that Germany is one of the main nations of the European Union. I am pretty far from being a fan of the EU, but one function it has fulfilled is in uniting a continent which had been at war with itself for centuries. If the EU never achieves anything else except to keep the nations of Western Europe at peace then it will have done a good job. Free, democratic people from the Orkneys to the isles of Greece. Just look at the Europe which is today celebrating this occasion. Of course it is far from perfect, but for the most part it is peaceful, prosperous, democratic and free. Now that is a wonderful tribute to those who fought and those who fell.

However, as we consider the great events of 60 years ago it is too easy to get carried away with the literally awesome undertakings. It is important that the veterans of the day are allowed to tell their story; history is not a sequence of great events after all, it is people. Ordinary people make history; ordinary people are history. And how many were there who played their part, did their bit but were never on the beaches of Gold, Juno, Sword, Utah and Omah? How many anonymous agents from SIS died in an ambush or in a Gestapo torture chamber preparing the ground for Operation Overlord? How many brave Commandoes scouted out the defences in advance on cold, moonless nights? How many men and women of the French Resistance suffered and yet struggled on to do their duty for freedom when the BBC uttered the Invasion code-words to Occupied Europe: ‘wounds my heart with a monotonous langour’?

I found myself wondering this week what part my old chum George Deary played on this day. Some of you may recall me mentioning George before here. He was a cheery wee, old man when I was a boy. Semi-retired he did a bit of work still where my father worked. He and his elderly wife doted on me and I loved visiting them. George used to put young apprentices in their places when they boasted of their physical prowess or toughness by simply tapping their arm with his finger. The arm would be paralysed for half an hour. George learned that during the war. George was a Commando. Like most veterans George never really talked much about his wartime experiences. Partly it is a characteristic modesty of his generation – they simply didn’t consider themselves to be heroes – and partly it is because we can’t understand what they went through, only those who were there can really know. Personally I always considered this to be one of the distinguishing marks of the peace these men made – the fact that the vast majority of people in the West do not know, even in these troubled times (and what time isn’t?) is the result of their efforts. Isn’t that one of the things they fought so hard for? To save their children and their children’s children from ever having to suffer the way they had? Well, they did it. Think on that next time you see an elderly man like George playing bowls or reading his paper on the park bench – think about what that man may have done in his prime. The historian Niall Fergusson in his history of the British Empire, when summing up the bad points and good points of that globe-spanning history came to the conclusion that there was one good point that was beyond question: the fight against the Nazis. It took the resources of a global Empire for this fight and every resource was used and used willingly, almost as if every part of it’s history had been leading to this point, to this magnificent show of defiance in the face of evil and tyranny, making its most astonishing contribution to the world even as these actions effectively ended it.

Taking pictures in my local boneyard recently I came across a simple headstone. I almost passed it by, being more interested in overgrown, Gothic angels and crumbling tombs. But I stopped for a moment and looked at it. A simple cross with a regimental badge on it, the emblem of the Royal Scots, one of the most elite regiments of the British army. I looked closer and read the names. In case you can’t read it in this picture, the top name is: “Private James Allan, Royal Scots, 22ND December, 1915, age 29.” James Allan died in the War to End All Wars. Below the cross on his simple grave is another name: “Pipe Major James Allan, his son, asleep in Jesus.” Only two decades after his young father died in the War to end all Wars his son died in combat, also aged just 29, fighting in France. Pipe Major Allan didn’t make it to D-Day. He met his fate during the fall of France in the summer of 1940. 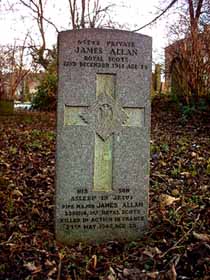 The professional men of the British Expeditionary Force who were so spectacularly rescued from Dunkirk after the devastating Blitzkrieg were his comrades. It was they who returned to a battered Britain where they trained tens of thousands of ordinary civilians to turn them into what the American historian Stephen Ambrose called ‘citizen soldiers’. These are the men who went on to fight at Normandy. I also thought it was worth reminding us all of the personal cost of war to families. These were just two, father and son, who fell. Dear old George survived but I wonder how many of his friends he lost. We must never, ever forget that those awe-inspiring statistics, those thousands of men, ships, planes, tanks, are not just numbers. They represent men who were individual men. They were fathers and sons, husbands, uncles, brothers. Each one with people he loved and who loved them. With their hopes and dreams, which far too many sacrificed for a future they would not live to see but would lay the foundations of. Let us hope these enormous sacrifices are honoured for as long as memory endures. Let us hope that so many people from so many lands and from so many classes can once again unite for a more noble purpose than war. Perhaps one day they will move Heaven and Earth once more but to end poverty, disease and hunger and so create a world fitting for the sacrifices that were made on our behalf one day on a beach on France.

Tonight, when the late summer dusk falls over Scotland I’ll light a candle for George and his mates and drink a toast to their memory. Friends, I invite you all to do the same.