NASA has announced that a new celestial object has been found out in the cold, dark shadows of the edge of our own solar system. A tiny, new world, far beyond even tiny, frozen Pluto and its moon Charon, named for characters from the Classical afterlife because they inhabit a truly twilight realm, cold and distant where the light of the sun is but a distant flicker. It has been named Sedna after the Inuit goddess of the oceans.

Back in the 1930s the hunt was on for Planet X – astronomers and cosmologists knew there had to be another planet beyond the ocean-blue glory of Neptune (not that they knew how glorious Neptune really looked – we had to wait decades until the fantastic triumph of the Voyager missions to see fabulous, glowing images beamed back to us over billions of miles). From estimates of mass and the orbits of the known planets it was concluded another world had to exist. In the 30s Clyde Tombaugh found it using an old-fashioned Blink Comparator, which, as the name suggests, allowed astronomers to rapidly compare two plates (taken a few days apart) to spot if there were any movement of celestial objects – primitive but effective).

But Pluto as it became known was far too small to account for the missing mass. Then again, modern cosmology is convinced there isn’t enough mass in the entire universe mathematically speaking, so either a lot is hidden as exotic material like the so-called dark matter or perhaps they are just plain wrong (or simply that their mathematics is too primitive to understand and describe the universe, just as Newtonian maths and physics, normally excellent, fall apart when faced with FTL distortions or Einstein when dealing with quantum mechanics).

It’s quite sobering to think that after centuries if astronomy – millennia if we count our ancestors who observed the heavens from their pyramids, ziggurats or, in our own islands, great standing stones arranged with enormous precision. And yet we didn’t even know Pluto was there until 60 years ago. And now, after half a century of space flight we have only now found another little world. The galaxy is vast on a scale we cannot really comprehend, our little solar system tiny by comparison – while this is an astonishing find it is also truly humbling; just how much we don’t know, how much there is to explore. I guess sometimes we really do get to go where no-one has gone before.

However, this amazing discovery will come as no great shock to those British SF fans of a certain age. We always knew there was a Tenth Planet. It’s Mondas, lost sister of the Earth and the pesky Cyber men (for those too young to know, a Cyberman is what the Star Trek producers ripped off to create the idea of the Borg, but Doctor Who beat them to it by decades) are coming on it to do something rather nasty to us, unless a certain wanderer in time and space can foil their dastardly plans once more.

Bizarrley on a Google search for Mondas as well as the above link for Doctor Who there were several companies who came up called Mondas. Are these human fronts for the devious Cybermen????? 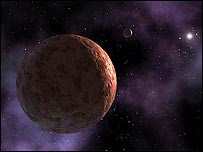