I was at a ceilidh for the first time in ages last night in the nearby Caledonian Brewery (Ceilidhs at the Caley as they call them), home of the finest ales in the galaxy (and still happily independent) with a bunch of folks from the bookstore. Hot and sweaty, swriling and whirling and getting funky Scottish style. Ceilidhs (that’s pronounced ‘kayleeh’ for the sassensachs amongst you and is a form of Scottish country dancing) are the most fun you can have with your clothes on. The band totally rocked, liberally mixing traditional Scottish folk music with jazz, blues, funk and dance beats and even wah-wah on the guitar (rock and roll ceilidh, gotta love it).

Didn’t catch the name of the band, but they reminded me very much of another one I used to dance to a lot during my college days, Shoogelnifty, who mixed traditional Scottish and Irish folk music with modern dance beats and all sorts of world music (have you ever danced to a Scottish fiddle, Bodrhan drum, electric guitar, saxophone and a didgeridoo? It’s irresistible). Most folk probably haven;t come across them, but they aren’t so far from the better known Afro-Celtic Sound System. 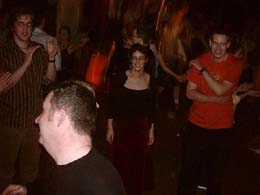 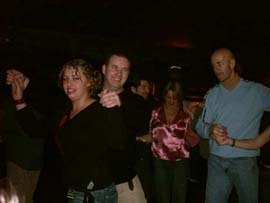