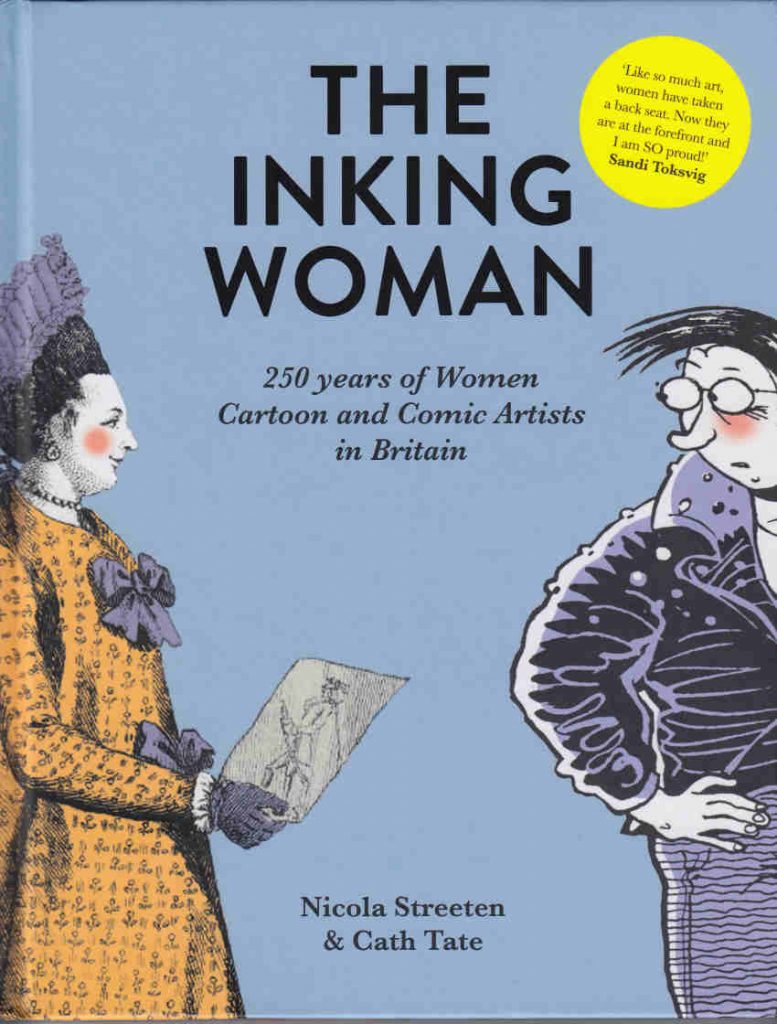 Comics and cartooning have often been labelled something of a boy’s club, both in terms of creators and most of the readership, and that’s a criticism that is not without some fairly solid truth behind it; in fact it’s still, even now in 2018, a subject of much debate. We’ve certainly seen change though, quite a lot of change, even just in the last couple of decades, and especially in the realm of Indy comics, small press and zines (the mainstream, while improving, is, as is often the case, lagging further behind). And while the larger visibility of female comickers in the last few decades is very welcome, they didn’t spring out of nowhere, like their male counterparts most of them have been inspired by those who went before them, and that’s one of the things Inking Woman does, and does very well, illuminates a side of British comics history that hasn’t been well served, and by doing so places those creators in a more understandable context, from pioneers like Mary Darly in the late 1700s or Marie Duval in the Victorian era (Marie is the subject of another recent, and much recommended Myriad release) through cartoons in Suffragette publications to the 1960s underground scene, the 70s and 80s rise of women’s liberation, the Rrrriot Girls of the 90s, the contemporary small press and zine scene and many points in between.

In fact that placing of cartoonists and comickers into some historical context is evident right from the beginning, and I am pleased to say not just historical but cultural and societal context (for example, the rowing women’s lib movement of the 70s leading to more cooperatives creating publications, which in turn provides both material and a space for women comickers to show their work, those comic works feeding back into the growing social and commercial groups by women, aimed at women). In her introduction co-editor Nicola Streeten mentions the likes of Jacky Fleming and Ros Aquith’s work that she read in her teens as powering her own ambitions in her comics work later on. I’d like to think that somewhere there is a teenage girl who will read Inking Woman and it will inspire her, to let her know she can create her own comics works too, and perhaps in a decade she’ll be citing Nicola and Cath’s work here as one of the starting points that got her going. 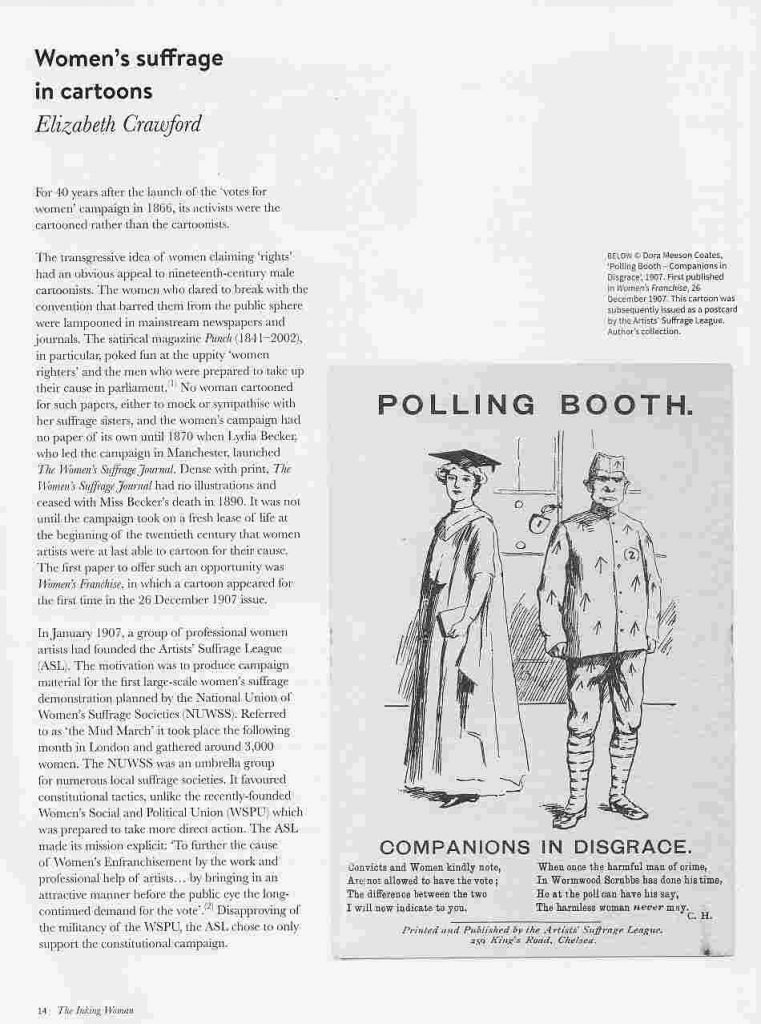 The book takes the form of entries on a multitude of women comickers from the 1770s to the present day, interspersed with chapters explaining some of the history and changing cultural elements throughout that period, such as the rise of the women’s Suffrage movement in the late 19th and early 20th century, the rise of feminism in the 70s, the influences of other parts of our ever-changing culture, such as Punk, with its DIY ethos (an influence I think you can still see strongly in the modern small press scene), the expansion of women-lead publishing like Virago or the Women’s Press, Cath Tate with her own publishing, discovering new and existing talents and reproducing their work.

Between those sections on the changing culture and history we have so many entries with brief biographical notes and a quick recap of the work of those women – in a rather nice touch more than a few of those entries contain quotes from the creator in question, talking about their own work or what it was like trying to establish themselves as a female creator, in their own words. Understandably there is much more material from the second half of the twentith century to today, and especially on the creators of the 60s, 70s, 80s, 90s and early 2000s, there simply being more creators working then. And as the authors note themselves, much of this is still living history, the woman comickers from that explosion in the 70s still with us to share that history, and many of them still actively drawing away. And as you move closer to the present you find many names that will be familiar to you – a lot of those creators have featured here on the blog, on Down the Tubes, on Broken Frontier. You’ve read some of those reviews, you’ve seen some of those creators at conventions like Caption and Thought Bubble, and, increasingly, at literary festivals, and chances are you’ve bought some of their comics from them. 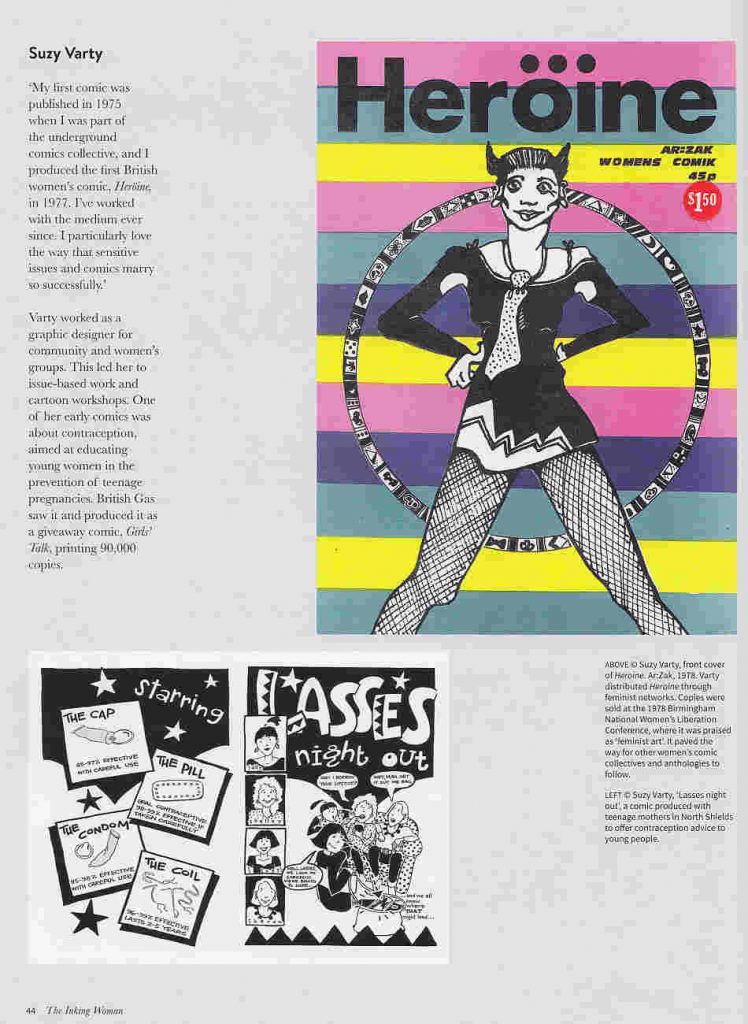 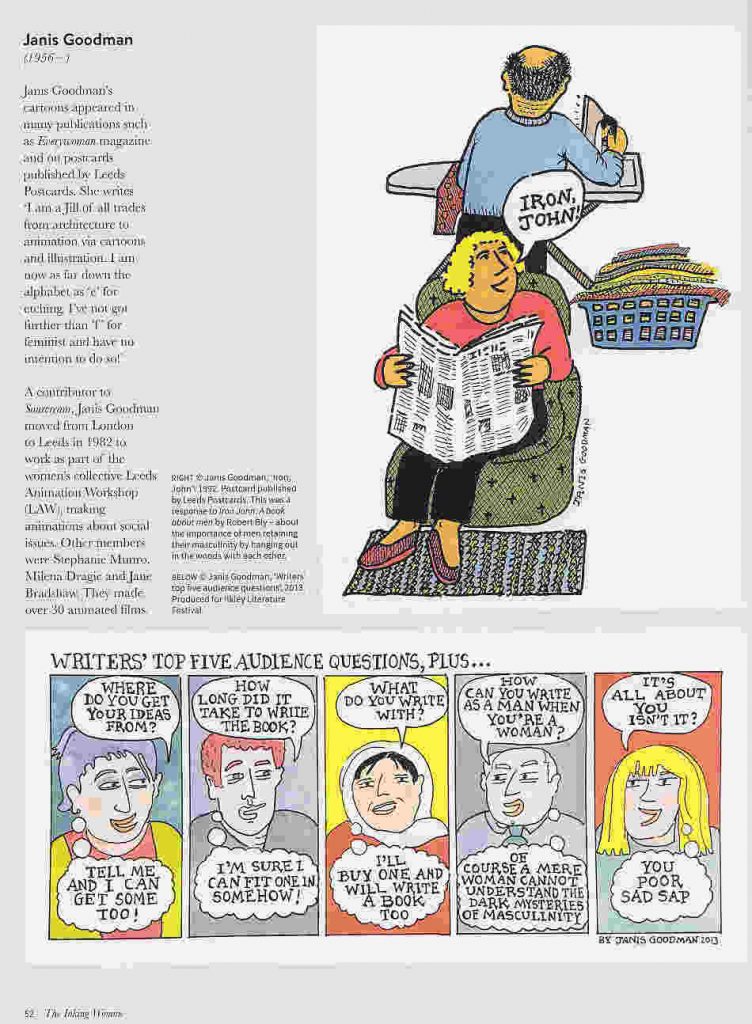 The book doesn’t shy away from discussing how difficult it has been to fight through a very male-dominated industry and society, or from commenting on other elements of diversity, such as much of the earlier work in particular coming from women who, while still having to fight sexism, did start from a much more privileged area of society (a criticism often aimed at the 70s and 80s feminist movement, for example, that it came predominantly from a well-educated, white, middle-class perspective that didn’t take in the experiences of working class women, or of women of colour, or LGBT people – but these things are always, hopefully, evolving and learning to be more inclusive and diverse).

But overall this is a very positive, in fact I would say optimistic book, especially as it moves closer to the contemporary era – the number of creators increases, they are more and more coming from different backgrounds, tackling all sorts of subjects from social issues to bringing Shakespeare to a modern audience , from using comics to openly and honestly explore their experiences, from encountering racism to dealing with illness or the loss of a loved one to out and out humour and satire. As the book moves into those later sections it felt as if it was, a bit like the comics community itself, gathering pace, growing in confidence and numbers and mutual support, in fact it felt rather joyful, and it isn’t hard to feel that enthusiasm and delight and want to share in it. 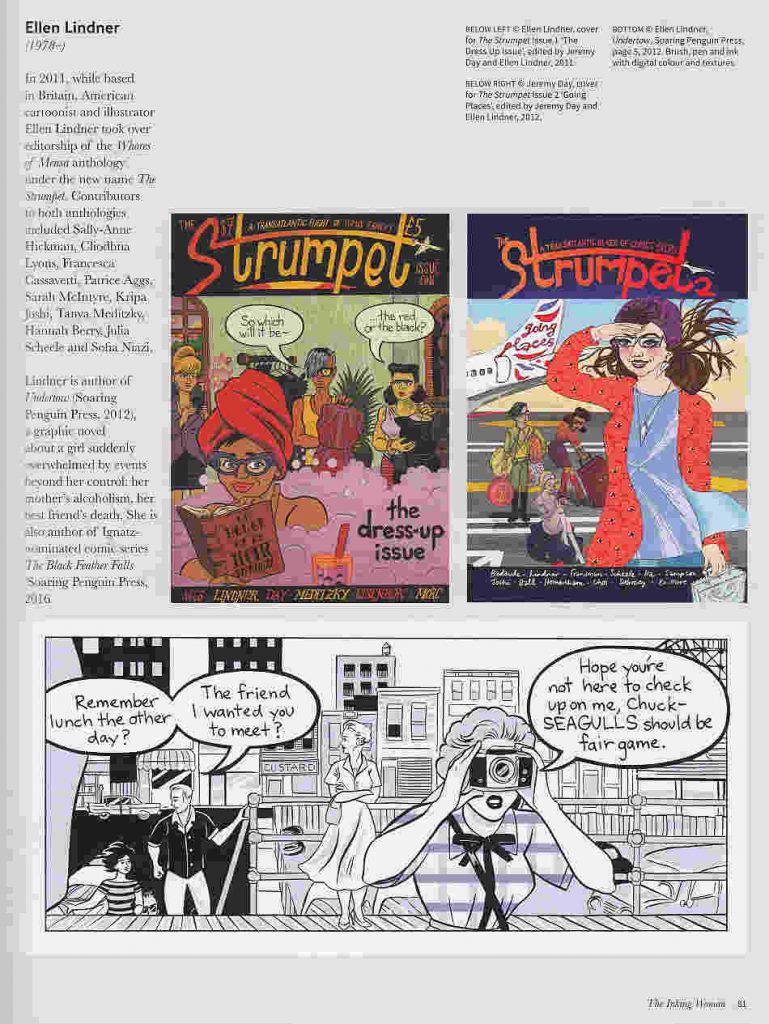 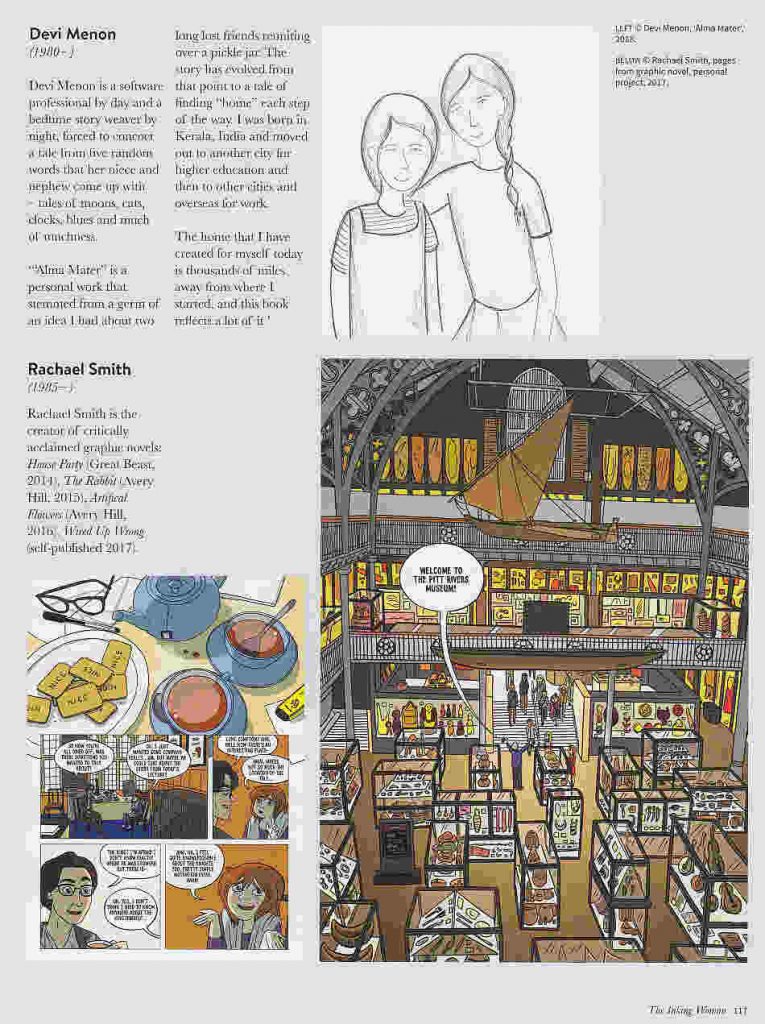 This is a wonderfully warm look at an important part of British comics history, it is also a history of the challenges of gender, class and more and how they can be overcome, of how the medium is part of that society and that societal change as well as reflecting it, or sometimes even leading the vanguard demanding that change, placing those changes and the changes still to come into a larger context of pioneers and inspirational creators in turn inspiring new generations to realise they are free to create, to say something. The discussion of the rise of small-press friendly cons and other events, co-operatives like Team Girl Comics or the Strumpet/Whores of Mensa also sends a positive message, something I must admit I love about our comics community, the amount of mutual support and encouragement. 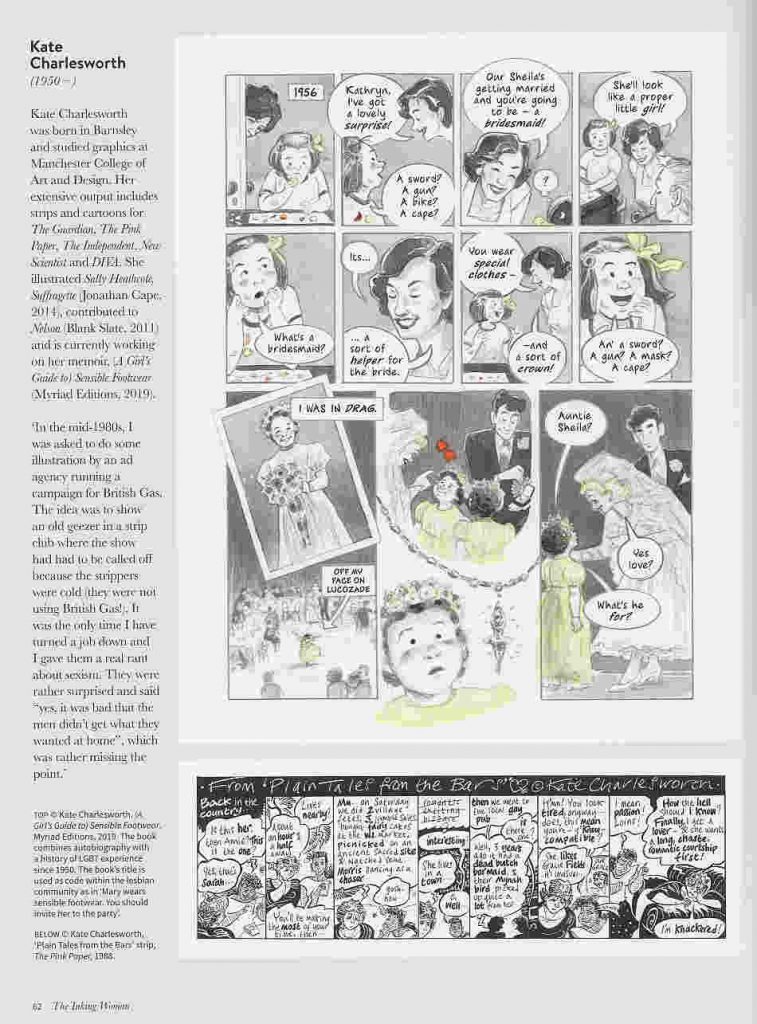 Flipping through the various individual entries on creators will likely bring cries of recognition at some of the names while also, hopefully, bringing creators who are new to the reader’s attention. I think many readers will come away from this not just with a more informed perspective on the history of Brit comics, but with a list of creators whose work they really want to read. And to return to what I said earlier, who knows, perhaps some young girl will be reading this and it will be the spark to her creative outlets and in ten years perhaps we’ll be reviewing one of her comics. I really like that idea.