So it’s ‘hasta la vista’ to Gray Davies and in comes the mighty Arnie as Governor of California, joining such other great thespians turned political philosophers as Ronald Reagan. At last poor, suffering California now has a governor who will kick ass.

Sorry, I meant to say a governor who will fondle ass. 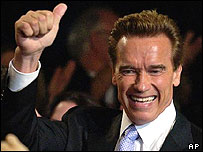 Doesn’t it make you glad to live in dear old rainy Blighty? Where even the most respected, Shakespearian thespian would still be ridiculed for running for office. The nearest we’ve had is dear old Glenda Jackson as a Labour MP or Scottish comedian Elaine C Smith as an MSP. What would we have? Ross Kemp as the Mayor of London (sorting out London’s transport problems and making sure everyone has a very short haircut)? Ewan MacGregor as the Lord Provost of Edinburgh? Bet he’d still get his willy out! And yes, before anyone who read the earlier Young Adam blog asks, he did indeed get his fabled willy out in that film too (so at least the nudity was pretty well-balanced male to female). Could his famous knob be put to good use as an ambassador for our fine city? Would it be on the official Edinburgh web site?

And why not other lands following this fine model of Us democracy? Juliette Binoche as President of France? I don’t know this wonderful actresses’ political leanings, but I suspect there would be some gratutious nudity in her term of office. Omar Shariff as President of Egypt? If he had trouble from other arabs he’s just shoot them around his well. Worked in Lawrence of Arabia. What about Steve Irwin as Prime Minister of Australia? If he can deal with crocodiles he can deal with international politicians – crikey he nearly had me there! And why not Peter Jackson for PM of NZ? Instead of a cabinet he could have a Council of Elrond to advise him… And finally why not Ariel’s old drinking buddy (I didn’t get to drink with him, just chat backstage as he told Ian Rankin and myself tall tales before our gig) Tom Baker? Tom Baker for Prime Minister! I hereby announce the commencement of a campaign that all geeks should take up – Tom Baker for Prime Minister of Britain! Jelly babies for all! Manifesto to follow!