On the way home from the cinema tonight I saw a flickering orange light in the distance, silhouetting the distinctive towers of Donaldson’s School for the Deaf over by Haymarket (where I once did a photo project back in my college days). Since Donaldson’s is one of the few large buildings not lit up at night in Edinburgh it didn’t take me long to realise the reason I could see the towers after nightfall must be because that glow must be from a fire behind the school. And from the size of Donaldson’s I’m guessing it must be a fairly big damned fire to illuminate it light that. 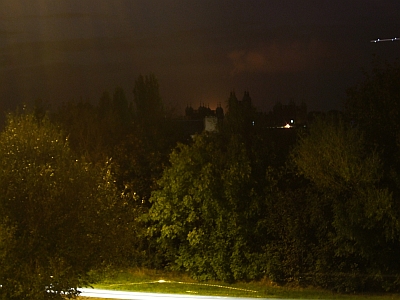 (fire at or near Donaldson’s School for the Deaf, Edinburgh – larger versions on the Woolamaloo Gazette Flickr set)

Too early for anything to be on the Scottish news yet and I have no idea from this distance if it was just a huge bonfire nearby (but who has a big bonfire just a few weeks before Guy Fawkes Night??) or an accidental conflagration, but I clambered up onto the wall near me, stuck the camera on the mini tripod stashed in my bag and snapped a couple of pictures – sorry, they are a bit blurred but it is impossible to focus when all the viewfinder shows is mostly black, so I had to just point it in the right direction, set the lens on night shot and let it go (I decided the subject matter outweighed the poor quality of the pics). Still, despite being a bit out of focus if there is a story here then I can say the Woolamaloo Gazette scooped it first! I do hope that it isn’t something in the actual school though; it is a rare institution that helps a heck of a lot of hearing impaired kids and the day I spent doing my photo project there back at college was a great day, the kids being so friendly to this big old dumbo who couldn’t even sign properly (yup, I was the odd one out there that day because I couldn’t lip read or use sign language, so in effect I was the one with impaired senses). 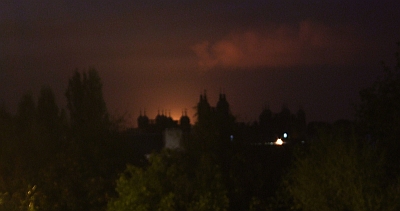