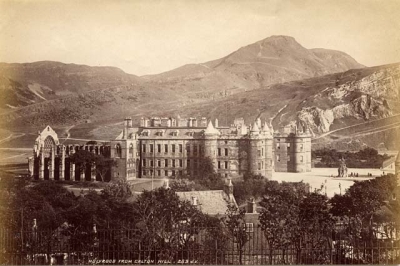 The Palace of Holyrood with Arthur’s Seat in the background, viewed from Calton Hill in Edinburgh, by James Valentine, thought to date to around 1878. 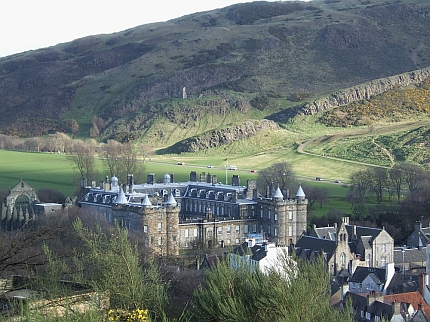 The Palace of Holyrood, the ruined Abbey and Arthur’s Seat from Calton Hill taken by me, spring 2007.

I found this online recently as I was sorting out some of my photographs to upload to my Fotolog and Flickr sites. Despite the history Edinburgh isn’t changeless, but obviously it has more than its share of places which do remain almost the same than most cities and sometimes you find photographs of buildings and streets which are almost the same today.

Imagine both pictures as portals to two different spots in history; imagine you could use them as the travelling points between those periods, to walk from the picture from now to emerge from then, to find yourself standing on Victorian-era Calton Hill, caressed by the wind, local worthies enjoying a peramabulation past you, lots of smoke rising from buildings in those days, a mix of tall masted ships and new fangled steamships visible down on the Forth an at the Leith docks, and perhaps Hill and Adamson, the great pioneers of early photography setting up one of their experiments with this new camera device, using the ‘pencil of nature’. How lovely would it be if you could do that? I suppose I will have to make do with living and working around the sites, which is, in its own way, walking through time every single day.