The BBC site had this astonishing photograph taken by the New Horizons space probe. This is Io, one of the moons of Jupiter, a world so large its collection of moons around it are like a miniature solar system (in fact it is reckoned if the gas giant Jupiter had been a bit bigger it would have reached the threshold to ignite the nuclear fires at its core and become a star, just as the sun did billions of years ago). Io is one of the Galilean satellites, one of the four larger moons first seen through an early telescope by one of my great heroes, Galileo, when he turned his new optical device on the king of planets. I’ve seen Jupiter through a large telescope at the University of Glasgow’s observatory myself, in enough resolution to see the coloured bands and even the mighty, centuries-long storm of the Great Red Spot; on either side of Jupiter’s glowing disc I saw two bright points shining like diamonds on black velvet and realised they were the moons Galileo had seen centuries before. 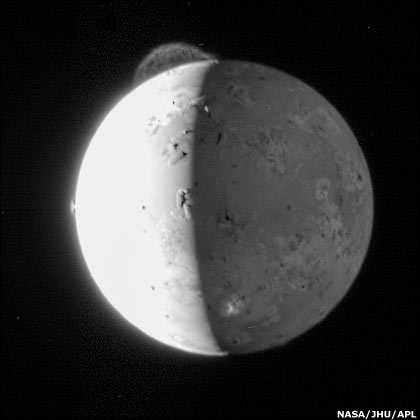 Io itself is a world which looks like an old-fashioned view of Hell, a surface covered in decaying yellows from sulphur, constantly reshaped by a continual series of volcanic eruptions as the enormous gravitational power of Jupiter twists the core of the little moon keeping it geologically active when most worlds that size would long have become inert, like our own moon. As well as tremendous gravitational tides the space between the moons and Jupiter is often filled with enormous amounts of high energy radiation – a beautiful but very inhospitable place; it increases my admiration for the skills of those who designed and operate these missions that these little probes can even function in such conditions. At the top of this image, almost on the terminator line separating dark from light, is an eruption from the volcano Tvashtar; this eruption is actually shooting out some 180 miles into space.

It reminds me of the triumphant Voyager missions years ago, when one woman noticed an anomaly on shots taken of Jupiter as the little probe left the system to continue its grand tour of our solar system (still the greatest voyage of discovery in human history to date). The data from those incredibly early computers was slow to process, even before taking into account the time taken to transmit that information to Earth over the vast distances. She noticed something strange and was at first unsure what she was seeing. Only slowly did she realise that one shot had, quite by accident, caught an eruption shooting right out into space from Io; a fluke shot and a chance find by that scientist to come across the first volcanic eruption humans had ever seen on another world. I’m just disappointed that all the promises of my childhood of holidays in space by the time the 2000s came around still hasn’t come to pass. When I hear idiots complaining about the money being spent on space exploration and how it could be better spent on problems on Earth (that bloody Davina McCall was the latest, showing her incredible ignorance) it infuriates me. As a percentage of budgets we spend very little on this actually; don’t demand cuts to exploration, cut the money on bloody massive weapons programmes, then we would have the budget for Earth bound problems like hunger and disease and to explore new worlds and learn more.