My friend and former colleague Gregor has a display of some of his luscious artwork in Oddfellows on Forrest Road, Edinburgh (now a very designer place, was a student hangout for younger undergrads when I was at college):

‘”Utopia’, like most of my art work, is about fantasy. I like to transport people somewhere other than their immediate reality when they become involved in my work, whether that be dancing at a club night I’ve thrown, wearing an item of clothing I’ve designed, or looking at a picture I have put together.

‘Utopia’ follows on thematically from an exhibition I had during the Autumn of this year, called ‘Lost In The Forest’ which explored the themes of repressed sexuality in fairytales and anonymous sexual encounters which was set in British forests and woodland.” 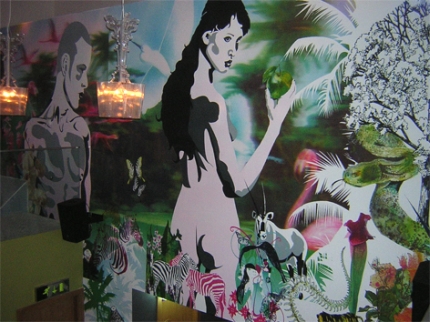 I haven’t been in yet but will need to make a point of swinging by to check it out; I’ve seen some of Gregor’s artwork before – he did some very cool designs for a new version of my first review site, the Library of Dreams, but the site never got going because I joined up with my friends on the Alien Online instead (now UK SF Book News) – and he does enjoy mixing in some nice sexual touches, dirty dog that he is! Nah, kidding, his work is always interesting and sexuality and portrayals of gender roles are such a major part of both individual and societal identities it is an endlessly explorable arena for any artist. If you are in town go have a look, if not have a swing by his MySpace site.