Yesterday I gave myself a fantastic Christmas treat and took myself off to the Edinburgh Filmhouse (one of my spiritual homes) to see the newly restored print of the evergreen (well, Emerald really) classic The Wizard of Oz. I’d been looking forward to it all week long; it’s being screened at the Filmhouse right through to January and after going to see the restored Manhattan print the other week I was tempted to go and see Oz, but then I decided I’d wait till this weekend; finished work for the year on Friday (nice to be in a job where I get to take that week off after all these years), cruising into Xmas, my birthday (start of my last year as a 30-something, blimey) and New Year so as part of the Official Relaxation plan I thought I’d save it till Saturday to mark the start of my break and so yesterday I took myself over the rainbow for a couple of hours.

Yes, I know, some of you are thinking, hold on, this movie is on almost every holiday season, you must have seen it a dozen times. Yes, I have, although I haven’t watched it all the way through in years. But watching a lovingly restored print on the big screen? No, I’ve never seen it on the big screen and the Filmhouse is a lovely place to do it because it is one of the few cinemas that still has curtains, still a cinema theatre; such a little thing and yet it contributes to the magic as the lights dim and the deep, red curtains slowly part and you feel that wonderful sensation of moving into another realm, a magical place outside of your everyday cares and troubles, a fragile place made of ideas and projected light and all the more magical for it. The opening has a dedication to the original books by Frank L Baum, proclaiming it one of the most loved books for ‘forty years’ (as it would have been when the film was made) and dedicating the film to the book, the writer and to all the readers of all ages who still marvel at it; more than half a century on that seems all the more touching since the film has created that kind of feeling for generations while the book continues to delight readers old and young over a century later. 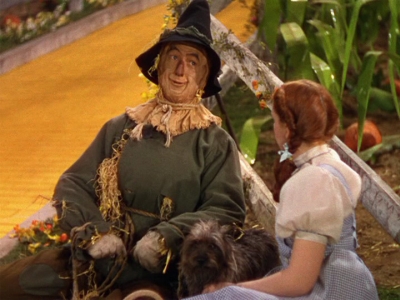 Watching the whole thing you are reminded how many classic lines are in there; like Casablanca everyone knows some eminently quotable lines from the movie, but really when you watch it again you realise almost the entire film is filled with quotable lines (many uttered by people who may never have seen it, read it or even know where the line comes from, such is the depth to which this story has burrowed into our culture). The effects hold up pretty well, all things considered – yes, sometimes I can see the wire making the Cowardly Lion’s tail swish or the flying monkeys fly, but so what? – and the switch from black and white to colour when Dorothy lands in Oz is still something else to behold, especially on a cinema screen (helped by the slightly lurid glow imparted by early, imperfect colouring processes, very different from the more naturalistic colours of modern film stock, which suits the film so well); how much more amazing must it have been to audiences in 1939, as darkness spread across the world and this colourful film glittered in the shadows of war?

Like many a bookseller I am a sarcastic cynic, but this is one of those films that bypasses all that sarcastic armour; I switch off those faculties for a while and simply wallow in delight (and indeed it isn’t all that sugary, being laced with more than its share of disturbing undertones too). When Dorothy and the Scarecrow (so fantastically played, walking like a man with no bones) first link arms and start to sing “we’re off to see the Wizard…” it is what I call a triple-M – a Movie Magic Moment – and you can’t help but smile (and want to sing). And the finale with Dorothy so desperate to get home seems to have more power at this time of year as many of us are actually planning to go home to our families for the holidays. It made me think that today I would be off home to my own mum and dad for a couple of days; lacking ruby slippers I will click together my Snoopy Joe Cool socks and utter “there’s no place like home, there’s no place like home” (it helps that my dead old dad is picking me up too, of course!).

And you know what? Dorothy is right – there is no place like home when it is a home with the people you love. Gods, but I am still grinning like a loon at the memory of that film. Yes, I know, I am a big kid, but I wouldn’t have it any other way. Wishing you all love, peace and warmth of the body and of the heart, folks and remember to always dance over rainbows when you get the chance.