DC released a book I’ve been eagerly awaiting and it came out almost a month early: Absolute Sandman Volume 1. If you don’t know the Absolute editions are oversized hardbacks on high quality paper (like artbook paper for the reproduction), stuffed with extras, the artwork cleared up to the best quality and then put into a slipcase. It tends to be a treatment reserved for major works such as the Dark Knight Returns or Watchmen or, in this case, Neil Gaiman’s Sandman (there will be four volumes eventually); over 600 pages of Gaiman Goodness.

Now I have all of this series in the original comic issue form, but this is so damned gorgeous to hell with the (not inconsiderable) expense, I have to have it. I’ve read and re-read and re-re-read the Sandman over the last few years, always finding something new in both the storytelling, the style and the art (and the massive, oversized format really lets you enjoy the art). I was in a lull in my love affair with comics when Sandman started; there wasn’t that much happening then that was really appealing to me until I picked up a couple of issues of this book I had never heard of. Being someone who not only enjoys good writing but loves the beat of our shared myth and folklore and the way it informs the human condition this was all but made for me; it drew me back into comics again, reminding me that the medium could still delve into new areas. Obviously I wasn’t alone because Sandman appealed not only to comics readers but to a far wider audience way beyond the normal comics community, drawing in literary critics and literature professors equally; it not only rekindled my love affair with the medium it drew in new people who realised that there was more to it that spandex and capes (although some creators have crafted some amazing work on that front too).

The literary community agreed, with one of the standalone tales in this first collection, A Midsummer Night’s Dream, becoming the first comic to win a World Fantasy award in the short story category. The Bard turned up several times in the 8 or 9 year run of the Sandman (including a lovely piece at the end which followed Shakespeare’s final years and the writing of The Tempest mirroring the tale of Dream himself) but this was the first time and saw old Bill and his company travelling through the countryside to perform A Midsummer Night’s Dream on the side of a chalk hill on the rolling Downs for Dream and his guests from Faerie; the actors playing Titania, Oberon and Puck watched by the real Titania, Oberon and Puck. Dream has commisioned Shakespeare to write this tale so that humanity will never forget them now that Faerie has left our world for their own realm. At one point Titania, an old friend of Dream’s, lean to him and remarks that these events they are watching never actually happened and yet they are still true. Indeed, madam, Dream agrees, events which did not happen can still be true; such is the nature of story and indeed the nature of our shared world mythologies – Gilgamesh need never have happened as recorded on those broken tablets but the events are still, in their fashion, true for every century of reader.

Another short story here, The Dream of a Thousand Cats (cats crop up a lot in the Sandman too), also plays with the way in which our stories and dreams shape the world. A cat, unhappy at the way her owners run her life and decide where her kittens go, now travels the land, addressing meetings of cats wherever she goes in an attempt to change the world. She tells how she had travelled far to find the Great Cat of the Dreaming (Morpheus takes on a different shape and colour depending on who is addressing him; an African person sees a dark skinned man, a white person a pale, tall man, a cat sees a large, black cat with eyes like stars; he is, after all, a Dream) and he told her that the world was not always as it is now. Once upon a time cats were gigantic and human tiny, playthings the cats enjoyed, until one human taught the others to all dream the same dream at the same time. Overnight the world changed to the way we know it now’ not only did they change the present they changed they way it had always been. Now she tries to persuade a thousand cats to dream it back, but as one cynical feline observes, there is little change of getting even a handful of cats to do the same thing at the same time. But the basic idea that dreams shape the world (one of Dream’s titles is The Shaper) was a powerful one, porobably because it is true. Even the most logical of human activities like science begins with a dream of what a person might do. 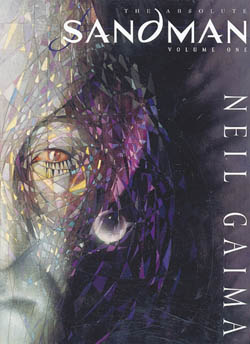 The main meat of this collection (the first 20 issues) comprises two main arcs: the introductory tales Preludes and Noctures where Dream is bound by an Aleister Crowley-like magician for decades beginning in 1916, causing chaos (Neil cleverly worked in the world-wide epidemics which followed WWI to the lack of a controlling influence in that very necessary function of humanity). This tale also introduced us to Dream’s older sister Death, one of the loveliest characters in comics (and I can’t wait till Neil makes his Death movie, he’s been talking about it since I first met him way back when Sandman was only part way through) in a rumination on the nature of life and death (and indeed, Death); I never read that chapter without thinking about people I’ve loved who aren’t with us anymore – it’s sad but uplifting at the same time.

The superlative Doll’s House arc is the second major chapter here though and it is where Sandman, for me, moved from being fascinating and different to being indispensable and moved Neil to the front rank of my favourite scribes. It also provided the first hints that Neil was weaving a tapestry and not just a linear narrative; events and seemingly minor characters would crop up much later (remember in the original monthly comics format this could be years later) with a much more significant role (here one of the post WWI victims of the epidemic sleepy sickness now becomes a key to the events). We see one of Dream other functions, which is the crafting of nightmares as well as dreams with the Corinthian, a nasty nightmare with mouths for eyes who escaped the Dreaming while Dream was incarcerated and inspired the modern serial killers. In fact Neil throws in the wonderful idea of a serial killer’s convention (including panels on kidnapping and extortion!). 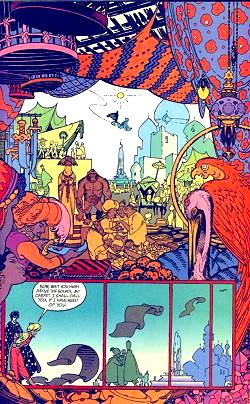 I can’t wait to see the following collections, especially the Season of Mists, where Dream goes to Hell and finds Lucifer is tired of it all and quits and the magnificent Ramadan tale which was done for the 50th issue, an Arabian Nights tale which also managed to incorporate references to the (now first) Gulf War with the mythical Golden Age of Baghdad, complete with flying carpets and other wonders; probably the most beautiful single issue of any comic I have ever read – how amazing the great P Craig Russell’s art for that will look in this large format… Sweet dreams, friends.