Following a link from Boing Boing I came across these old ads from the 70s for kid’s toys tied to shows and movies (yes licensed merchandise did exist before the Star Wars toys). This ad for the Lone Ranger series of toys brought back nosatlgic memories for me because I remember having the him, Tonto and their horses (but not the waggon or the bad guy). 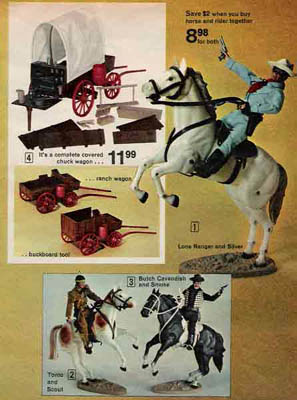 This site has old adverts for the 70s Star Trek dolls and superhero dolls; again I remember having some of these during the 70s and loving them, but being annoyed they were in a different scale from Action Man. In fact I remember being in the large toy department on the upper floor of the old Goldberg’s store in Glasgow and being treated to the Spider-Man doll for getting a good report card at school. And how well I recall the Six Million Dollar Man doll; there was a hole in his head (literally) which let you look through his skull to a magnifying lens in his eye, to simulate his bionic vision, while one arm had rubber skin which rolled up like a condom to reveal bionic bits you could take out of the arm and lose while the rubber ‘skin’ ripped. Oh the fun. And that cool red jumpsuit! 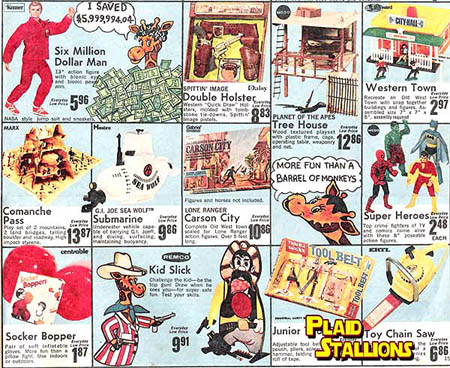 Of course it wasn’t just dolls of popular show characters, a boy in the 70s had other fun items to fiddle with, from big, orange space hopper and showing off your chopper (titter ye not) to playing TCR: Total Control Racing. Yes, kids, the racing set which lets you have total control by changing lanes because it was ‘slotless’ racing. Except half the time the damned contact brushes would come off the power lines and your car would come to a halt in-between lanes. Ah well, there was always the ever-reliable old train set. Toys are great and I still love them. Any of you have warm memories of favourite toys from childhood?