I posted a piece on the FPI blog the other day about this free online animation series Hugh Hancock told me about, Bloodspell. It uses a 3-D game engine to let low-budget movie makers create animated features. And in a very nice touch the crew have made it with the Creative Commons license so not only can you watch or download it for free and then mucking about and reworking it is positively encouraged, which is rather refreshing (plus it is the kind of thing which pisses off those numpties who bore cinema audiences to tears with constant ‘go to the cinema, fight piracy’ ads at each screening, despite the fact they are preaching to an audience who are already in a cinema). In fact they deliberately take the mickey out of those awful FACT adverts in some episodes as you can see from this image. 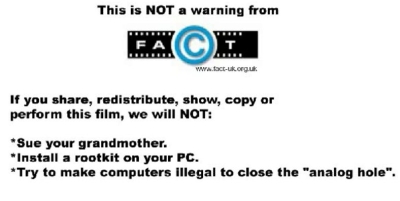