Well shiver me comics timbers, me hearties, it has been a hard week’s sailing on the Quantum Pig’s Revenge, also known as the Good Ship FPI, as me and me buckoes Crowbar and Paul (fellow F P Irates, if you see what I mean) labour away at the mainsail of comics and cult booty. Lots of new titles from big publishers to go on, catalogue titles to plan out and the third week celebrating UK talent for British Comics Month on the work blog. More British independent comics folk signed up and onto our site as well, which is terrific – probably not a huge-selling area compared to say marvel or DC titles, but is good to give them a chance on the site; besides I’ve been really surprised with the diverse nature of what is on offer from the self-publishing lot.

It varies from very roughly done to work which looks very professional, but they all offer something a bit different and as many of them offer webstrips of their work on their sites its well worth checking them out, especially as they are pretty low-cost so you can afford to take a chance – we’re doing free postage on them to encourage readers (the Indy folks signed up so far all have their sites listed under British Small press in the FPI blog’s links section). I think more folks would take a chance on the Indy titles if they were aware of them, so here’s hoping it does raise their visibility. When I am a bit less broke I think I am going to have to have a look at some more of them myself.

As part of British Comics Month we’ve been running articles on that theme on the FPI blog each working day, which as you can imagine, is a pretty heavy load but also fun. So there is quite a bit of postings on there, from personal reminiscences of comics past from myself, top British SF author James Lovegrove, articles on creators (my chum Padraig did a good one on Alan Moore) and interviews, including an interview I did with Euan Kerr, head honcho of the Beano (how cool was that? Talking to the man who is on first name terms with Dennis the Menace and the Bash Street Kids!), an unusual ‘discussion’ with several of the British Indy comics folks and just this week a Q&A with Leah Moore and John Reppion about the brilliant Albion series (thanks guys!) – you can see more of what writers and artists say by checking the interviews category on the blog.

All of which has been tiring and frantic on top of the regular stuff, but enjoyable (plus it is good to be in a post where you can do different things and innovate); however we had a visual highlight of the week in the form of this fantastic ad we had for the FPI blog and podcast in the new issues of Comics International, drawn by one of the best cartoonists in the UK, Hunt Emerson. I’ve had this pic for a while and been dying to show it to you all, but obviously had to wait until it appeared in the journal first. How cool is that? I’ve always wanted to be a cartoon character and now I am one! Yo, ho, ho and a bottle of… er, well don’t care much for rum, think I’ll stick to the Bowmore single malt (even pirates have a palette you know). If you check the work blog you can see some of the rough drafts of the ad as well. 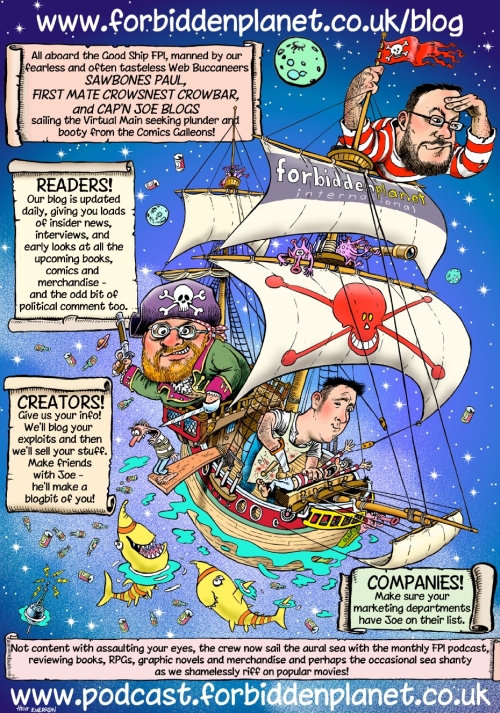