Quite a musical few days recently – checked out the Jazz Bar on Chambers Street, just across from the Royal Musuem and enjoyed some good, smooth jazz in a nice subterranean bar. Much as I love being able to breathe in pubs now the smoking ban is in effect for some reasons an underground jazz hole doesn’t quite seem right if it ain’t smoky. Perhaps, as Gordon suggested, they should install a dry ice machine so we could still have a smoky-looking, dimly lit jazz venue but without the carcinogenic side-effects.

A good bit of acoustic gigging later on in the weekend as well in Sandy Bell’s, a well-known venue for Scottish folk music. I think at one point there were four fiddlers bowing away to the beat of the bhodran, while Mel was very taken with the chap who was playing the double-bass and the way in which his leaning over the instrument meant his bum was sticking out. Women, treating men like they’re just a sexual object, tsk, tsk – men have feelings too you know, we’re not just sex objects. Sometimes I get tired of being treated just as a sexual object. At least I think I’m being treated as a sex object… Does being called a dick count???

Anyway, the music also took the form of a cool jazz CD by a 50s and 60s trumpet player, a guy I came across after finding him via Google a while back. A lot of his work was import only but I found one which was more easily available and was also one of the first major discs he cut after putting together his own band. The jazz musician is called Joe Gordon :-). Of course I had to hear it! And it is a pretty good bit of jazz, man. 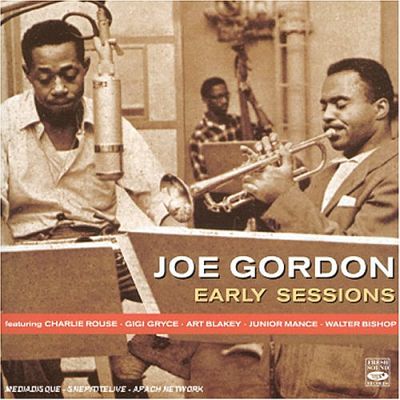