Tonight I went to do something I do often, check the Edinburgh Filmhouse website. A pretty normal thing for any movie lover in this city to be doing, as the Filmhouse is a mecca to us. Except tonight that quick visit to check film times has left me utterly shocked and terribly saddened. On the front page is the news that the incredibly vibrant Shiona Wood, education officer at the Filmhouse for many years, had passed away a few days earlier from cancer, aged only 57. I’m gobsmacked.

Shiona was a movie lover, a person who encouraged others to enjoy and partake in the cinematic arts, brilliant fun to be around in the Filmhouse bar and a friend since my college days. When I was at Queen Margaret studying Shiona became a regular, agreeing to take some of the film classes, especially those dealing with gender topics. Our lecturers were actually a nice lot and we got on well with them, but Shiona was a welcome breath of fresh and colourful air from the regular academic tutors. For starters she didn’t have a beard and she didn’t favour corduroy. And she loved cinema, culture and she enjoyed getting other people not to see it as a dry, academic study to write an essay on but as something alive, interactive and above all, fun. We hit it off quite quickly and for years afterwards some friends and I would often go along to the film courses at the Filmhouse which Shiona organised, with public screenings followed by lectures and Q&As. We all went as much for the enjoyment of watching and discussing good movies as for the social aspect as we’d all end up in the comfortable environs of the Filmhouse cafe-bar afterwards, Shiona among us.

When I left college and was scraping a basic income as a part-time bookseller Shiona would always stick me down as a student for the film courses (which left more money for the drinking afterwards of course). I hadn’t seen her in weeks, not since last bumping into her as she was coming up from the Filmhouse and I was heading down. I was thinking about her as I enjoyed a drink there the other weekend when waiting for Buster Keaton to begin. She was such a wonderfully friendly, colourful, vibrant person and I can’t believe that even cancer could take her from us and way before her time. It’s just sinking in that I’m not going to bump into her at the Filmhouse bar or a Film Festival event again.

The Film Fest will be a little quieter than usual without her presence this year and I think I will be only one of many people who are going to miss her. Film critic Mark Cousins has written an obituary for her on the Filmhouse site. God, that sentence makes me feel worse – colourful Shiona and the word obituary just don’t go together. On Saturday 1st July the Filmhouse will hold a special memorial for Shiona, screening Joan Crawford in Mildred Pierce with an introduction by Mark Cousins and profits going to St Columba’s Hospice. That little magical moment when the lights go down and the projector’s whir is hear in the sudden silence won’t be quite the same in the Filmhouse again; I think I’ll find myself looking for her out of the corner of my eye in the flickering light. I saw some movies and thought about media in different ways than I may have otherwise if it hadn’t been for Shiona and I’m sure I helped finish off more bottles of wine than I would have otherwise because of her too. She made a difference and she was loved. 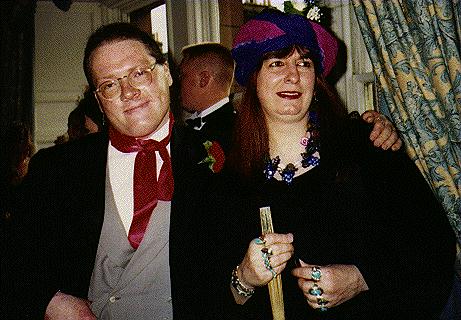 Shiona and I glamming it up at my graduation ball in the 90s.