Warren Kramer Paino Advertising of New York City has decided to sue a blogger who commented negatively on the PR campaign they had been hired to do for tourism for the state of Maine. Personally I can’t see how putting forth your own personal view that a particular campaign is a waste of tax-payer’s money or badly put together constitutes defamation – it is comment and individual opinion, which are protected by free speech. Are WKPA trying to say that no individual is allowed to say anything about a company or a local government campaign which those bodies may not approve of? On that basis that would mean if any of us commented on, say the fact that Edinburgh City Council ripping up the historic High Street to resurface it only a couple of years after spending vast sums to redo it and now having to do it all over again because they got it wrong showed gross incompetence and financial mis-management of public funds would have to worry about being sued by the council or the sub-contractors who made such an arse of the job in the first place.

Oh dear, perhaps it means I can’t comment on the most recent McDonald’s TV advert in the UK. The one which features a small child running manically about everywhere with his parents constantly shouting “slow down” to the little tyke. This goes on for the whole ad until they go to McDonald’s and the kid is asked what he wants with his Happy Meal and he is befuddled, unable to make a decision and told to “hurry up”. I guess now I can’t comment that it would be possible to interpret this advert in a way contrary to the company’s preferred reading – that perhaps you could read this advert as showing the child is manically hyperactive throughout because his parents feed him a diet of high-sugar fast food and the reason the only time he slows down is when asked a question is because this diet makes his body hyperactive but provides few nutrients necessary for cognitive development, so the child cannot reach a decision when asked because his brain isn’t developing due to poor diet.

Of course, I’d hate to be sued by a certain burger company which has been know to issue more than the occasional writ for expressing my own personal reading of that text. Fortunately I know as someone with an honours degree in communcation studies that alternative interpretations against the preferred reading of a text is a well-known phenomenon in academic studies and can use that as precedent to defend my opinion (that came in handy last year when my then employers said I had used a mass medium to defame them – I explained what a mass medium was in academic terms and then added I had a degree in this sort of thing and they could contact my old tutors to find out they were wrong and I was right. I enjoyed that).

Then again, I shouldn’t have to since it is my opinion and I, like everyone else, including Lance Dutson, am entitled to express my opinion. And as Neil Gaiman points out, regardless of how the company feels, it should have realised that the negative publicity it would attract by suing a blogger for expressing his views would not only harm their image more than his opinions were perceived to but draw far more attention to his blog than before – in fact as Neil points out if you Google the company now their website comes down well below many other sites discussing the case! Sounds a little familiar to a certain bookstore a year and a half back who complained a certain blogger was destroying their public reputation on a blog only a few people had ever heard of and only succeeded in then having those writings and opinions they disapproved of beamed around the planet in numerous languages.

Since several companies have had this experience now you’d think they would start to try something different, but for a company which supposedly deals with the selling of images and desires to people, such as this advertising agency, not to understand how much damage they can do to their own image… Well, I don’t want them suing me so I won’t say it smacks of incompetence, but if I were a client I would now look at them and think do these guys really know anything about managing image online when they do this???

As a nice commentary on this here is a cool alternative advertising image for Main Tourism which one of his chums made up: 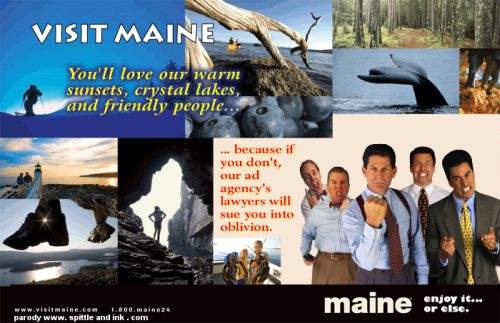