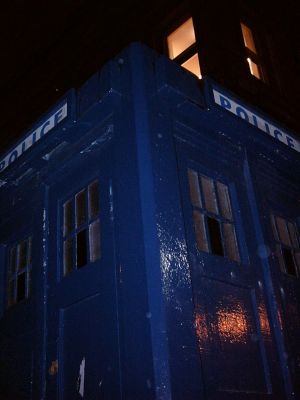 Still on a total high from last night’s new Doctor Who and thought I’d post this late-night snap of the proper TARDIS-style police box in Buchanan St in Glasgow I took on the way to the station to head back to Edinburgh after Eastercon. My mate’s wee boys have been know to go up and hug it – to them it is a TARDIS, just as it was to us when we were kids. We knew it wasn’t really a TARDIS, but there was that little bit of you that wanted to believe that it was and that through those doors was a huge inner space of a ship which would take you across time and space. Its the same part of me that wanted to leave my window open for Peter Pan to fly in, explore wardrobes in case they had a portal to magical lands or listen for a clock striking odd hours so I could sneak out of bed and explore a secret garden at midnight. I suspect it is one of the reasons I read so much today and the best novels and poetry give me that feeling of magical possibilities again, adding another facet to the lens you view the world through.

Last night’s episode was a cracker; it appealed to me as I am now, but it spoke even mroe directly to the child in me as we saw the return of one of the most loved companions in the series’ long history, Sarah Jame Smith and the 70s robotic hound, K9. For those of us who grew up with Jon Pertwee and Tom Baker’s Doctors, both of whom the actress who played Sarah, Liz Sladen, worked with this was a special present from the makers of the new show (mostly fans themselves). It was fun to see the Doctor Who Confidential afterwards on BBC 3 and see the behind the scenes for that episode and just how in awe of Liz the new production team and cast were. As new Doc David Tennant said, he had grown up watching her with Tom Baker and remembered K9; now here he is all grown up, acting with them and he is the Doctor.

One workmate said he wasn’t looking forward to this episode because it smacked of ‘pointless nostalgia’. Well, he was too young for this to be nostalgiac for him, as it was for me (and a lot of you I suspect) and he was totally wrong – the new DW team don’t throw these things in just for the hell of it, they put it in if they think they have a good story which requires it. In this case they continued the delightfully silly but great adventure (Buffy’s Anthony Head as a wonderful leering villain! Every schoolkid’s secret belief that teachers are actually monsters confirmed! Blowing up the school! Great!) but also the trend they have started with the new show which looks at what the Doctor does, how he lives his life and how it really affects the people he deals with in a way the old show rarely did.

This started right with the first episode of the Eccleston series, where the conspiracy theory guy is putting together fragments of the various Doctor’s appearances throughout history, always at a time of strife and noting that wherever he goes death abounds. Of course we know it isn’t usually his fault and he is trying to save people, but it is true that wherever he goes these things happen. It is a sentiment borrowed from some of the more mature comics and graphic novels from the 80 onwards where, for example, some have looked at the relationship of bizarre villains like the Joker to Batman, asking if the Dark Knight’s very existence helps to create these menaces which he then has to defend people from.

Last night’s episode was especially touching because it looked at how time spent travelling with the Doctor across history and space affected the companions. How do you go back to a normal life after that sort of experience? Its not even like you can talk to people about it as no-one will believe you. Nice touch where she mentions the spaceship over London seen the the Xmas special and how she imagined the Doctor would be near by ‘ oh standing on top of it, he replies airily. It is especially poignant for Sarah of course, because she had to leave and the Doctor always promised to come back but never did 9and there he was in London at Xmas and didn’t even think to call her!) – now we see Sarah having lived a life waiting for a man to come back to her and when he does it is by accident. We see Rose looking at the Doctor in a different light now and wondering if she is seeing her future. And we see it from his point of view because no matter how human he looks he isn’t; he is a Time Lord, a being who will walk through centuries. As he explains to Rose, if she wants she can spend the rest of her life with him, but he can’t spend the rest of his life with her; she will age, decay and die as humans do while he will go on, regenerating when one body is tired out, for centuries as the people around him age and die.

It was a lovely bit of balancing in a single episode, throwing in sheer fun, nasty villains and some serious emotional baggage and it made for a cracking story. 30-something me loved it; 10-year old me adored it. And I know a police box is still a police box, but there will always be a part of me that knows deep down that really it is a TARDIS…