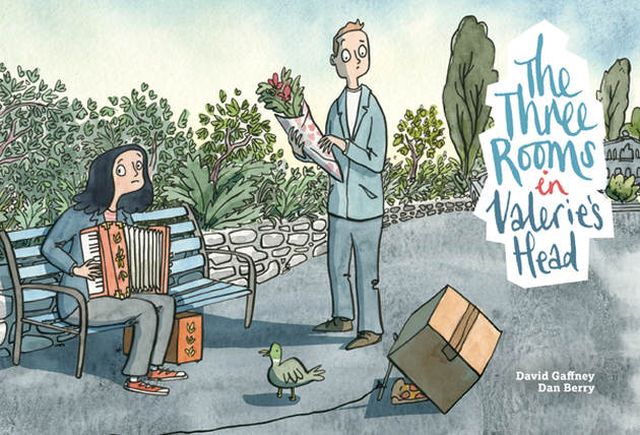 “Valerie’s mind had three rooms: a front, a back and a cellar. If there was something she didn’t want to think about at a particular moment she would move it into the back. Then she could concentrate on playing the accordion. Or explaining her job to her mother. The problem was the cellar.”

I’ve been rather looking forward to reading Gaffney and Berry’s new book from Top Shelf, the description intrigued me when I first heard about the book, a woman who has serial problems with each relationship she attempts, and the obsessions and problems that cause each to go wrong or to fail to satisfy her standards. Relationship problems are nothing new for comics tales, of course, but here they are given an extra-fine twist: Valerie keeps her ex-boyfriends preserved bodies in her cellar, bringing them up regularly to talk to about her day or latest problems, even posing them into a sort of diorama (playing pool in the pub, performing trad jazz). And as she moves each body around and talks to it, this leads us nicely into a flashback of her time with that particular former beau. 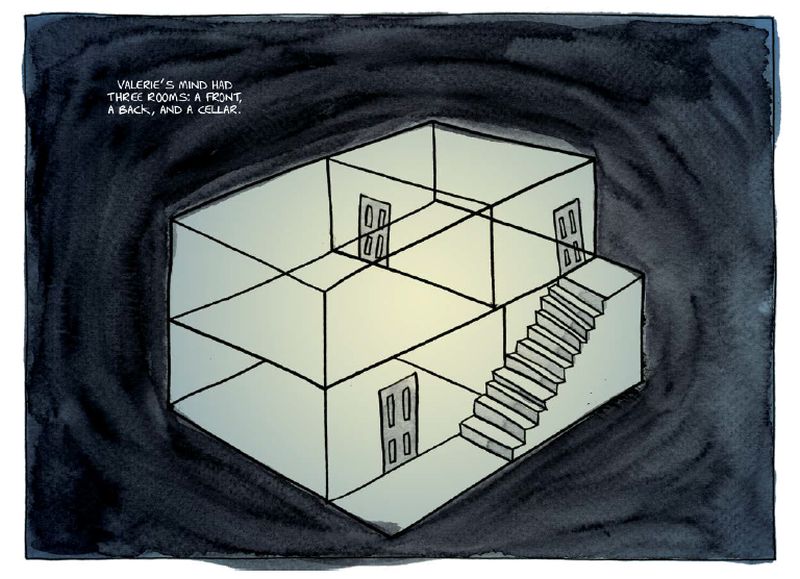 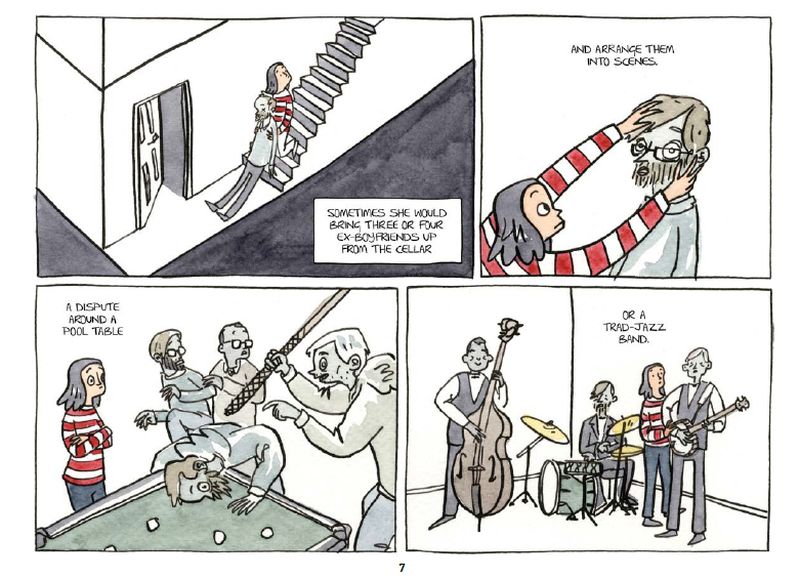 And what a collection they are, each with some very serious defect. Well, at least, that’s how they are presented to us, but of course we are getting all of this from Valerie’s perspective. We see all the flaws in her would-be partners exposed over the course of their relationship, and wow, some of them really are hum-dingers – the boyfriend who hates wearing corrective lenses so has his car windscreen ground to his optical prescription so he can drive without glasses. Terrific. Not so good for anyone else in the car with him, like, say, Valerie, who is left nauseous by the distorted glass. And then there is the boy who is the first one she’s known who has a house with no street number! Oh dear! Or a bizarre fixation with the eyes of a former girlfriend that he has to tell Valerie about.

But each of these failings and flaws slowly reveal much more about Valerie than they do her would-be boyfriends, and we see more and more of her problems surface, of the aspects of her own character, expectations and problems which sabotage any really strong relationship developing more deeply. Talking with these preserved bodies of former boyfriends may be some sort of therapy for Valerie, but it is also a crutch she is using to validate her choices (and failings) to herself, to be in control of her own narrative, but it also reveals the gaps in her life, it reveals the needs she has but either can’t connect properly with someone else to fill, or perhaps she’s a bit scared and backs off before she gets too close (and yet given her cellar collection, she clearly can’t let go either). 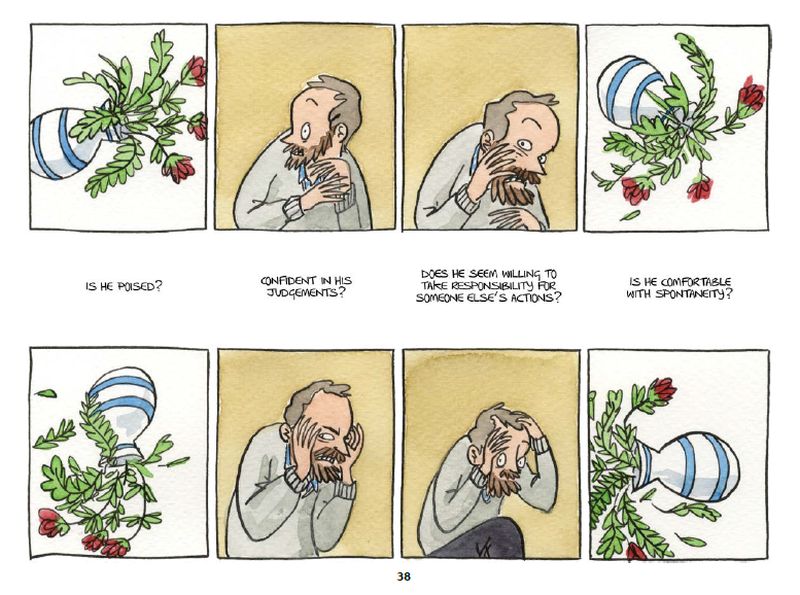 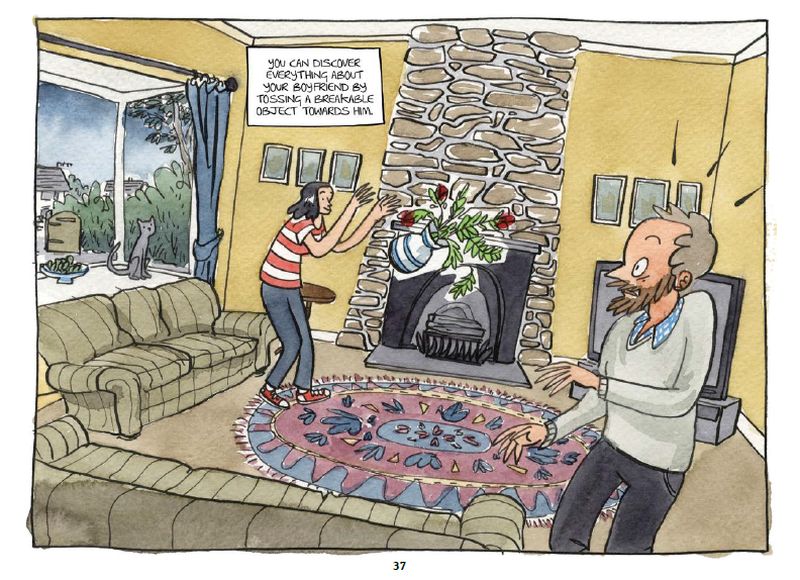 In some hands this would have been one of the emotional-confessional, “oh I am such an emotional mess” type tales which Indy comics has rather more than its share of (not to knock that sub-genre, I’ve enjoyed more than a few of those comics over the years). This is a very different beast, less the autobiographical confessional of some failed relationship comics tales, this is far more comedic and with a delightfully surreal bend to it so that even when there are moments which  are rather sad they also manage to evoke laughter. It’s no mean feat to conjure both pity and humour from the same scenes, but Gaffney and Berry do that repeatedly throughout Three Rooms.

Dan’s art adds to that mix of surrealism, pathos and comedy enormously, his expressions on Valerie’s face as she argues with her cast of deceased boyfriends had me giggling away, but at the same time feeling sorry for her (actually Dan’s art had me roaring with laughter on a number of occasions, those expressions cracked me up). It also makes you pause and think – we all have little fantasies and daydreams, little narratives we tell ourselves about ourselves and our lives. Perhaps, thankfully, not to the surreal extreme Valerie has, but pretty much every person does have them, and that means we can all see a little of ourselves in Valerie, the hopes, the fears, the failings, the coping mechanisms; she’s not exactly a mirror to the reader, but she is perhaps a distorting reflection reminding us none of us are perfect and each of us tries some mental tricks and stories to help us deal with life’s slings and arrows, each of us could easily be Valerie. 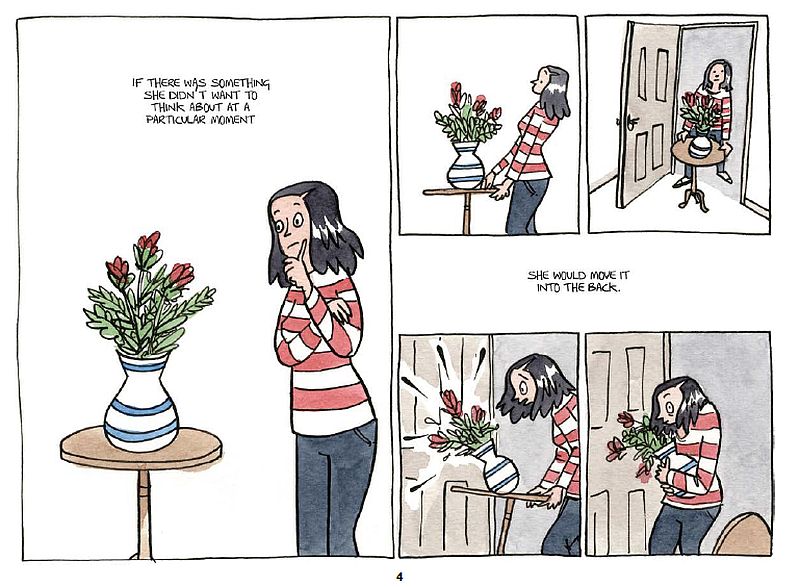 That this is all delivered with a delightful level of humour – and a humour that steers away from meanness, it’s not laughing at Valerie’s foibles and failings – Gaffney’s script and Berry’s art working hand in glove, the dialogue and the imagery, especially during Valerie’s talks with her deceased beaus are so nicely timed together, they hit all the right beats.