Friday has arrived and I am up to four films since Monday. Last night was my first screening of this year’s Edinburgh International Film Festival as Alex and I made use of my two-for-one deal to go and see the anime feature Tokyo Godfathers by Satoshi Kon (of Perfect Blue fame). Highly enjoyable movie about three homeless folk – the grumpy old guy, a cross-dresser and a teen girl runaway – who find an abandoned baby in a back alley on Xmas Eve. Hana, the ‘homeless homo’, in her cross-dressing clothes thinks this is a gift from God because he’s always wanted to be a mother. Although the simple story which follows runs through a range of occasionally predictable adventures and misadventures, it is wonderfully handled. It is an anime which can appeal to all ages and will leave you with a smile on your face – especially when you hear Beethoven’s Ninth having the Choral section sung in Japanese! Good start to the Film Fest, followed by late night, open-air ale quaffing after midnight (yes, I do put that bit in partly to tease my chums in England who would have been kicked out of their pubs long before this time, poor things).

Another day, another film; this afternoon it was off to the fabulous Filmhouse (where I practically lived as an undergrad), home of the Film Festival and the city’s major arthouse cinema (off to the Cameo on Sunday, which is half arthouse, half commercial) and one of my major stomping grounds in my student days. After a nice relaxing beer and soaking up the atmosphere it was in to a totally packed house to see Touch the Sound, a movie exploring the nature of sound, music and how we perceive them by following the Scottish musician, the delectable Evelyn Glennie. As some of you may know Evelyn is the world’s only solo percussionist, playing to sell-out concerts all over the world. She’s also one of my musical heroines; I’ve seen her live several times and she is an astonishing musician, a veritable dynamo of rhythm when you see her perform.

Evelyn is the perfect person to explore this theme of sound. Not only is she a gifted performer, a graduate of the Royal Academy and a woman who has made a traditionally male-dominated sphere – percussion – her own she has also been deaf since before her teens. Sound, says Evelyn, is a series of vibrations (hence the name of her autobiography, Good Vibrations). She already played piano as a child when her hearing started to fade. Abandoning the hearing aids she was given she and her music teacher in Aberdeenshire learned to listen for those vibrations with the rest of their bodies instead of their ear drum. In effect, she quite literally feels the music. In a beautifully touching scene she returns to her old school and has a musical session with a hearing-impaired young girl. Inspired by Evelyn she takes off her hearing aids as she is encouraged to try the instruments and to feel them. Then Evelyn makes her turn around and proceeds to play a variety in instruments from the mighty timpani through to a tiny, windup music box, which she places against the timpani skin to make it vibrate. The look of utter delight on the face of the young, deaf lassie is fantastic and would melt the heart of any cynic (yes, even me).

Evelyn is fascinated by sounds of all sorts and the movie is littered with quite wonderful scenes. An experimental improve jam with composer Fred Frith in the acoustically amazing disused factory in Germany is the main anchor to which director Thomas Riedelsheimer returns throughout the film as both artists use this enormous, derelict space through a variety of instruments, then playing with found objects as the mood takes them – anything which they can use to make music. Following Evelyn around the world as he interacts with other musicians and artists it is easy to see the child-like joy as she finds fascinating new sounds to try out, quickly integrating some old pieces of metal and a stick into an energetic melody. In one fabulous scene she is performing in a small club/restaurant in Japan. Borrowing some items like plates, a glass, empty bottle, beer can – basically the detritus of a meal really – and some chopsticks to play them she rapidly improvises an amazing jam with the other musicians. In another scene she goes from playing a snare drum in the middle of New York’s Grand Central Station to jamming with a young street performer, a young woman tap-dancing. Evelyn joins her and as the woman’s hard soles mark out a staccato beat in her dance Evelyn takes her snare drum and a plastic bottle of mineral water and deftly interplays with the dancer’s rhythmic sound. Its one of those qualities which mark out the real artist – the ability to improvise from almost any materials and to make your art from them. It’s not different from sculptors who create something from found materials or a writer like Harlan Ellison creating short tales in a bookshop as people throw ideas at him. Kudos also to Riedelsheimer who uses his editing to mark out everyday sound and rhythm, taking in the rhythmic bumps as cars go over the joins in the road, or the sound of pedestrian’s feet on a glass floor in a shopping mall.

This was a film of pure delight. Obviously as a huge admirer of her work I am biased and I realise Evelyn’s music may not be to everyone’s taste (I suspect those of us who enjoy jazz may have the right ear to listen to it) but this should appeal to anyone interested in music, in perception and in art – its even humorous in places and warmly human. The afternoon just got better for me though. Before the film began a representative of the EIFF told the audience there would be a Q&A after the movie with the director. There was a further surprise when Evelyn herself was revealed to be in the audience and joined the director on stage. Before the movie I had a half-inkling of what may happen if I was lucky when I noticed one of the Filmhouse staff with a snare drum. I hoped my assumption was right and was duly rewarded when the afternoon ended with Evelyn giving us an impromptu performance – just her on the stage before the screen curtains with a single snare drum, uplit with a spot below it. Now you may be forgiven for thinking that you can’t make much up a solo snare drummer. Well, this isn’t some heavy metal drum solo, this is the world’s only solo percussionist showing how it is done. We were treated to the full performance of the snare composition she had been playing in scenes in Grand Central in the movie. I’ve done some drumming in my time and on the snare I’ve done rat-a-tat-tat sounds and the occasional adventurous rim-shot (that’s not rude, you filthy people, it’s when you clock your sticks on the metal rim rather than the skin). Evelyn used an amazing variety of techniques to coax a range of astonishing sounds from a simple, single snare drum. I haven’t seen her live in years and this was just fabulous and the fact that things like this happen is one of the things I so adore about the Film Festival.

I very much agree with a lot of what Evelyn says in the film about enjoying and interacting with sound. I may not have her gift, but I love picking out different sounds and am as likely to stop to listen to something interesting as I am to stop to look at an interesting image, be it the differing sounds the breeze makes through different trees or the sound when I bop an empty poster tube at work against something (or someone). I love the different sound the waves make on a sandy beach then a rocky piece of shore. I love the way the seasons sound different; street sounds are different in the summer – pedestrians sound different, windows are open and sounds of conservation, dining and music drift out and echo among the walls. In winter the windows are closed and the streets are quieter, mist and snow soften every sound. In the rain the passing cars make a totally different sound. I adore the sounds crisp, dry leaves make when you kick bundles of them in the autumn. So I guess she was preaching to the converted in my case. I think it is vital to keep that child-like, simple joy in your life. Too many people will tell you to act your age (whatever that actually means) but why listen to someone who let that sense of delight atrophy inside them? 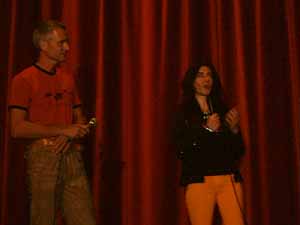 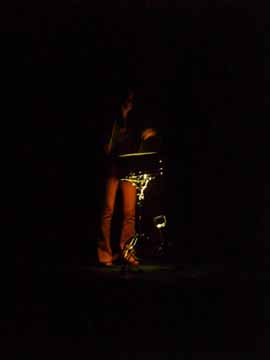 When Evelyn suddenly appeared I whipped out the wee digital and snapped these off – not the best quality as I was right in the front and didn’t really want to set of a flash in their faces, especially when Evelyn was playing her solo in the dark. I am still so buzzed from this whole afternoon!