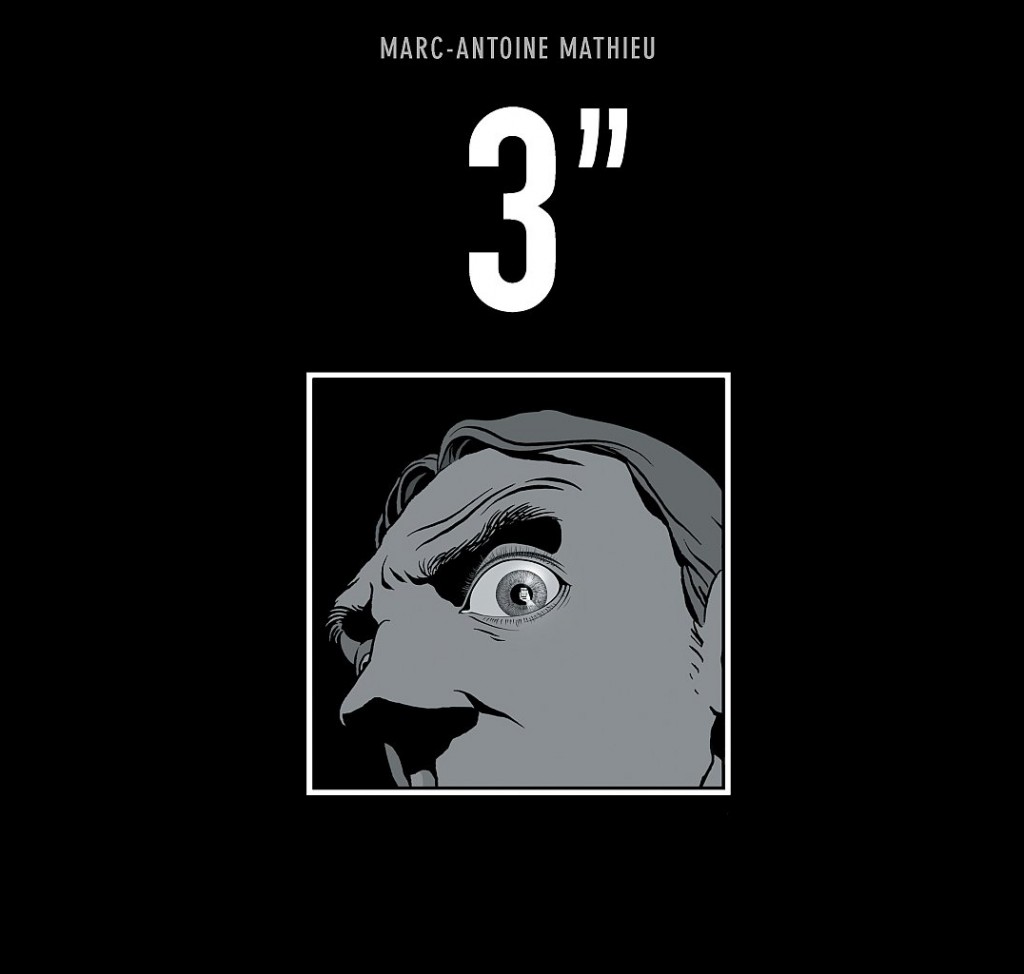 Marc-Antoine Mathieu’s 3″ describes itself as a murder mystery, told in only three seconds. How can three seconds be simultaneously enough for a murder mystery to play out sufficiently or for it to be long enough to fill a whole book? One, two, three, blink and it’s over, surely? Well yes and no are the contradictory answers to that. Yes, three seconds is a short time, normally, at least to human perception, but in those three seconds, as Mathieu points out, light will have travelled around 900, 000 kilometres. And time and space, what can happen within those qualities of existence, our perceptions of those events and the unique way in which the comics medium can manipulate temporal and spatial references are all at the heart of this rather bold experiment in comics storytelling by Mathieu.

We open on a slow zoom in, a nine-panel grid (which Mathieu adheres to religiously throughout the entire book), each panel taking us a little closer, like frozen images from the frames of an old celluloid movie film. And right away Mathieu establishes his main gimmick, his MacGuffin, if you will, the device he uses both as the means of telling this story from pretty much a three hundred and sixty degree wraparound perspective and also at the same time his main stylish conceit: reflections. As we zoom in and out of each series of nine frames we realise we are following those same three seconds’ worth of light particles (and indeed waves, since light, tricky bugger that it is, manages to be both) as they move between reflective surfaces, the opening zoom into a man’s wide-open eye eventually pulls in close enough to reveal the lens of his eye reflecting the mobile phone he is holding, which the next sequence zooms towards, until it is close enough to reveal the tiny lens of the phone’s camera, which in turn reveals the reflection of the man holding that phone. The sequence zooms out and as we see more detail around the man with each panel we see right behind him is another man, grim-faced, with a gun raised in his hand, pointing towards the back of the head of the man with the phone…

It’s incredibly complex stuff at one level, as Mathieu must have spent so much time having to work out angles of reflection as he bounces each scene off another reflective surface – a camera lens, an eye, a shiny earring, each time expanding the scene out – and it is the same scene, the same three, short seconds of life or death drama we are witnessing. Each sequence reveals more from different perspectives as Mathieu expands the area around the main event, reflected light taking us spinning around that event to see partial glimpses of it from different perspectives, from around that room in the opening scene to a glimpse from another building, which leads us to the street which leads us again elsewhere, even as far as an airliner passing high overhead and even the cold, unblinking techno-cyclops of a satellite camera in orbit staring back down. All of this our light bounces around within its three second window. At the same time it is in some ways remarkably simple – one short scene, after all. But the multiple variations on perspectives create complexity from this simple-seeming scenario. 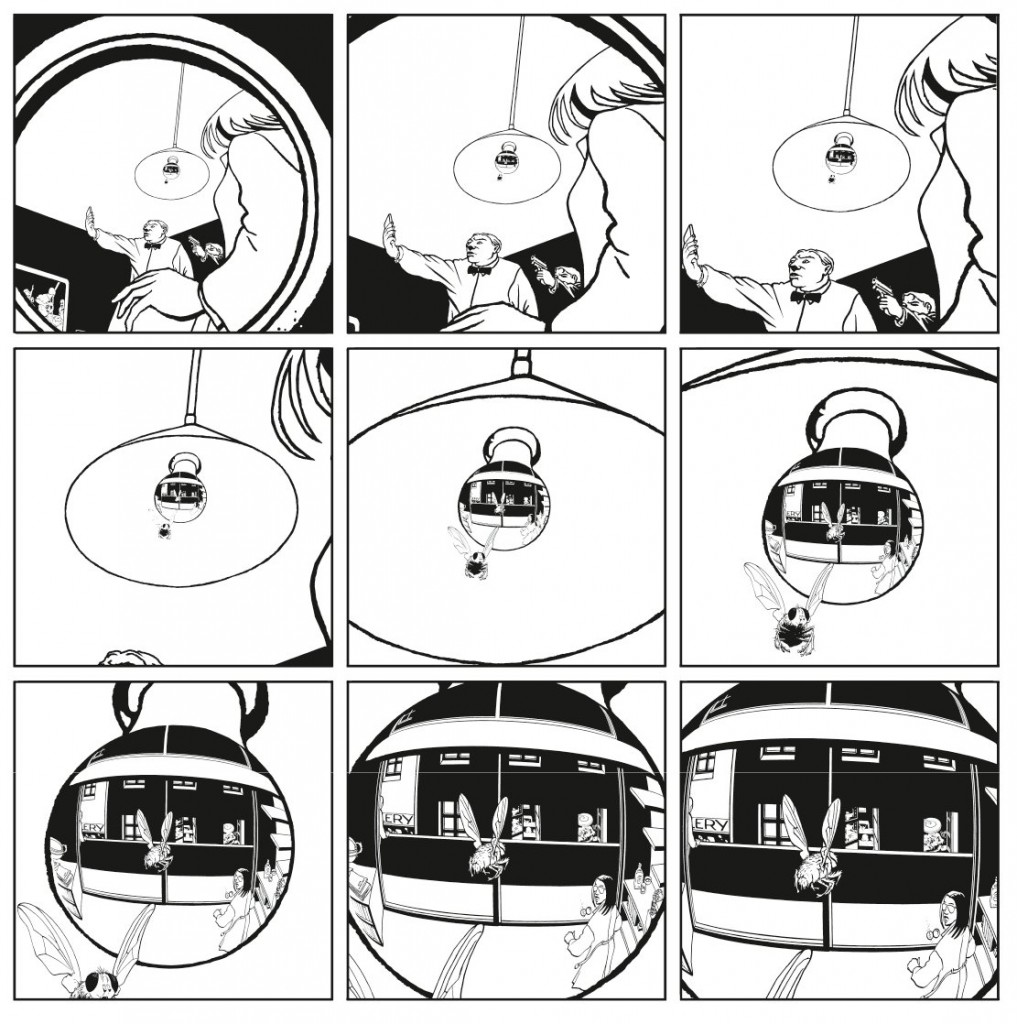 I’ll confess I was intrigued by this notion even before I received a copy of the book, but I was also wary – I’m all for people experimenting with the medium, it’s ripe for it after all, comics are such a wonderful place for creators to tell stories in remarkably different ways. But part of me worried that this might seem like a clever gimmick, but just that – a gimmick. A nice trick, interesting, clever, rewarding to the reader even, but only for a short time, perhaps too much of a reliance on such a gimmick to stretch it out to a whole book? No, that fear was unfounded. I’ll admit it took me several pages to really get into 3″ – oh for sure I liked the technique of the reflections and travelled light from frame to frame, but it was perhaps only when I was starting to get around a third of the way through that I really started to get it.

This isn’t just about a clever technique. This is Mathieu rewiring the visual part of your brain.

Let me explain a little, and bear with me, because this is a very subjective experience and not easily put into words (even more subjective than most reading, I mean). As that repetition of nine frames, each leading to another sequence of reflections and different angles on the same event builds up in your head you reach a sort of critical mass as a reader: the book is no longer a flat, two dimensional object, Mathieu has had the visual part of your brain, the same part that, often without your conscious thought, maps the world around you to let you navigate it with seeming ease, taking in his two dimensional world and recreating it within your mind’s eye in three dimensions. In fact, four dimensions, really since we must include here the element of time to the X, Y and Z axes of a three dimensional representation. As you read each new series of nine panels is giving your brain more information and it starts to reconstruct this three seconds of reality from all sides, as if you were constructing a hologram of it, a fully realised, fully dimensioned scene you could spin around to examine from any and all angles. 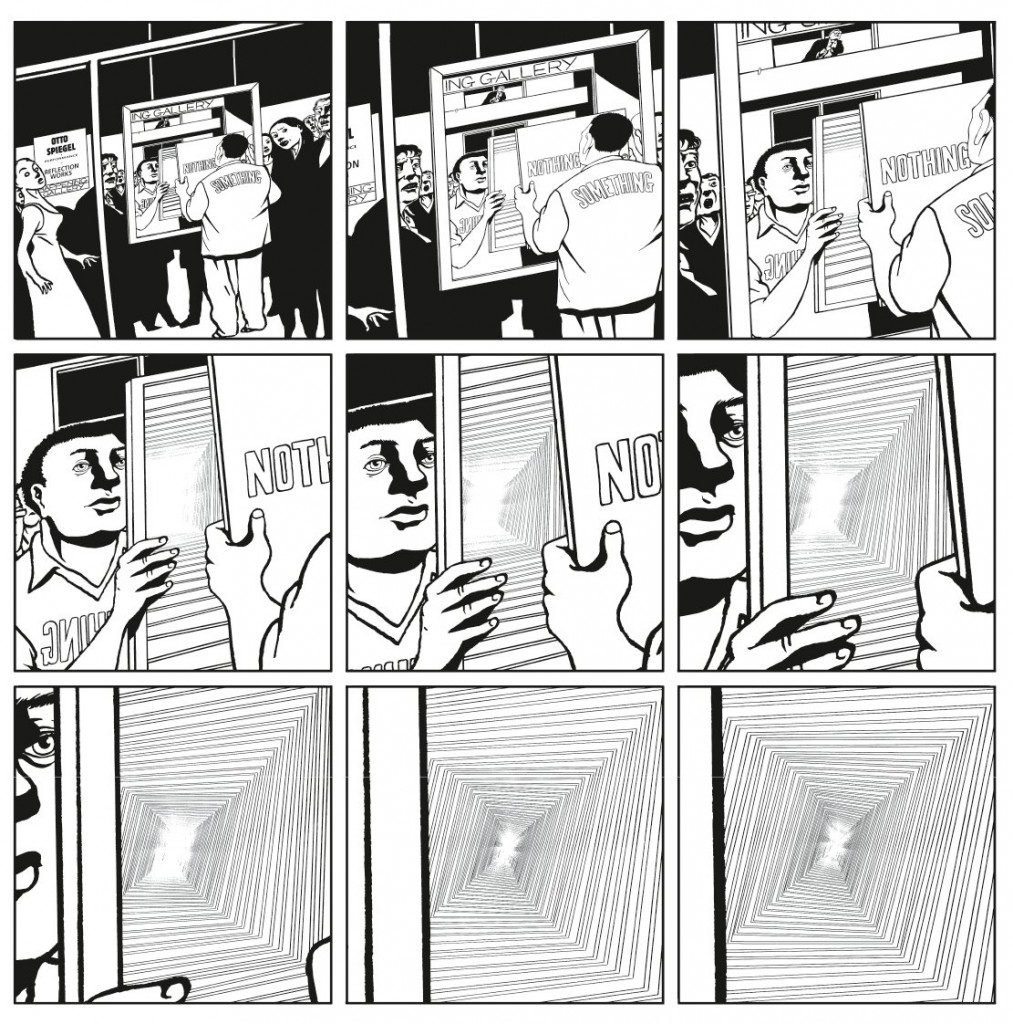 It’s ‘bullet time’ from the Matrix recreated in comics form. Except not just in comics form – as I indicated, Mathieu is trusting the reader, indeed relying on his reader, to do much of the work here. When you reach this threshold – and I imagine it will differ for each reader at what point in the story you do – you realise the artist has put the scene, the story, the entire book inside your head. It’s magnificent, head-spinning stuff when you grasp what he’s done and it feels so rewarding too, that no matter how cleverly he worked out his panels, his moves, his reflections, his slow reveals, it can only work with one last reflection – through the eye and into the human brain where it is reprocessed and becomes a fully realised scene within our own heads. Chris Ware at his recent Edinburgh Book Festival talk discussed ‘three dimensional comics’, that is works like his and others which used the two dimensional surface of a printed page to give the reader a real feel of a fully dimensioned world they can believe in and sense. Grant Morrison too has discussed how the flat ink and surface paper can create a form of virtual reality, a multi-dimensional space we believe in and which requires the reader’s active participation to fully realise (and that’s it, we’re not just reading, passively scanning text and images, our brains are constantly interpreting and rebuilding what we read inside our heads – all the more so with a work like this which is actively seeking to engage with those mental faculties so directly). Well, this is a grand experiment in pushing that faculty of the medium to a new level.

This is a remarkable interaction between the printed page and the reader’s own imagination and mental faculties, a true collaboration between storyteller and reader, and the more perspectives we gain as those nine panel pages progress the more we realise our interpretation of what we thought that first scene was are changing (as with anything context and perspective can always alter meaning, a good thing to remember). In any good murder mystery the reader is always a bit of a participant, trying to guess what happened before the conclusion, drawing on the evidence the author provides, but here it is taken to a whole new level. In fact Mathieu’s work demands the reader’s active participation, and there is even a complimentary website which expands this reader-author interaction. As I said I approached this intrigued but unsure it was more than a clever little conceit of a device more suited to a short tale as an experiment, not for carrying an entire book. I came away with my head rewired and the space Mathieu created now living in full dimensional life inside my brain. It’s a head-trip, up there with those visual eye and mind opening moments such as the Stargate sequence from 2001 or scenes from Apocalypse Now which similarly crack open your imagination and create a very personal-level interaction with the art. It is very hard to really articulate to someone how those experiences feel, but we all know them when they happen – a certain film scene, a piece of music, a painting we fall into – and it changes us a bit. This, for me, is one of those moments. Truly remarkable and a wonderful demonstration of the power and flexibility of the comics medium and its ability to engage with the mind of the reader in astonishing ways. You can even read it backwards, should you wish, like a comics palindrome.