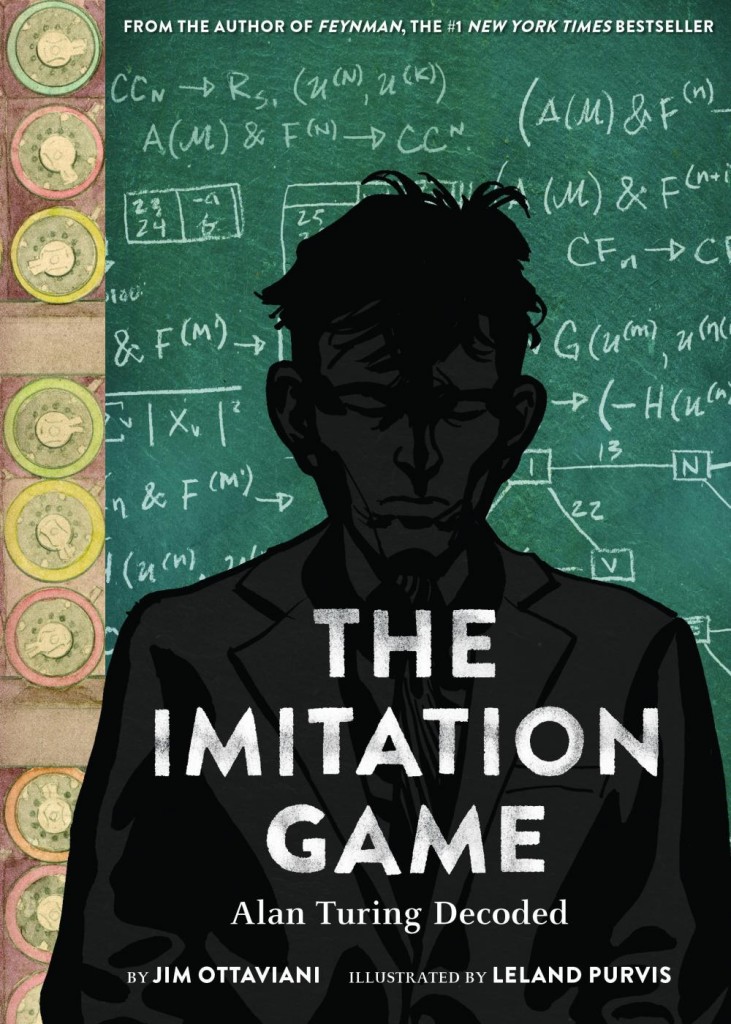 I’ve long been fascinated with the life and work of Alan Turing, the remarkable British mathematician and boffin (and if anyone deserves the affectionate old British label “boffin”, surely it’s Turing), the ideas, far ahead of his time and the technology available to him, spilling out of that unusual mind like a brilliant river of thought that most of us would struggle to stay afloat in, let alone navigate that river. Ideas which changed the world, although for many long decades some of that astonishing work would be concealed under the Official Secrets Act, wartime work not to be discussed. And it wasn’t; from the eccentric academics with their erratic, lateral-thinking brains tackling seemingly impossible problems to the legions of women who sweated over the operations at Bletchley Park, they kept their mouths closed. Some, like Turing, would go to their graves long before the nature of their work was revealed, the role it played in saving the nation – and arguably the free world – from the dark tyranny of the Nazi onslaught.

And as if helping save the world was not enough, also using those desperate times to push the envelope, advancing ideas and new technologies which would otherwise have taken years or decades more, birthing the proper digital programmable computer (in hastily erected sheds in wartime Britain of all places). Birthing the technological creations which would take us from the Industrial Age into the Information Age, a revolution we’re all mostly still running to catch up with, an idea which, like Gutenberg’s movable type printing press before it was an idea which would branch off into so many other areas, influencing every aspect of our lives, from everyday things like train travel or making a phone call to the exotic, like launching satellites or creating new ways of peering into our bodies to create new treatments. And some of those first ideas come from a young, eccentric and awkward, but brilliant, lad, ideas which may have remained only theories and academic papers and perhaps the odd bit of mechanical or electronic tinkering, if the budget allowed, until the war came. 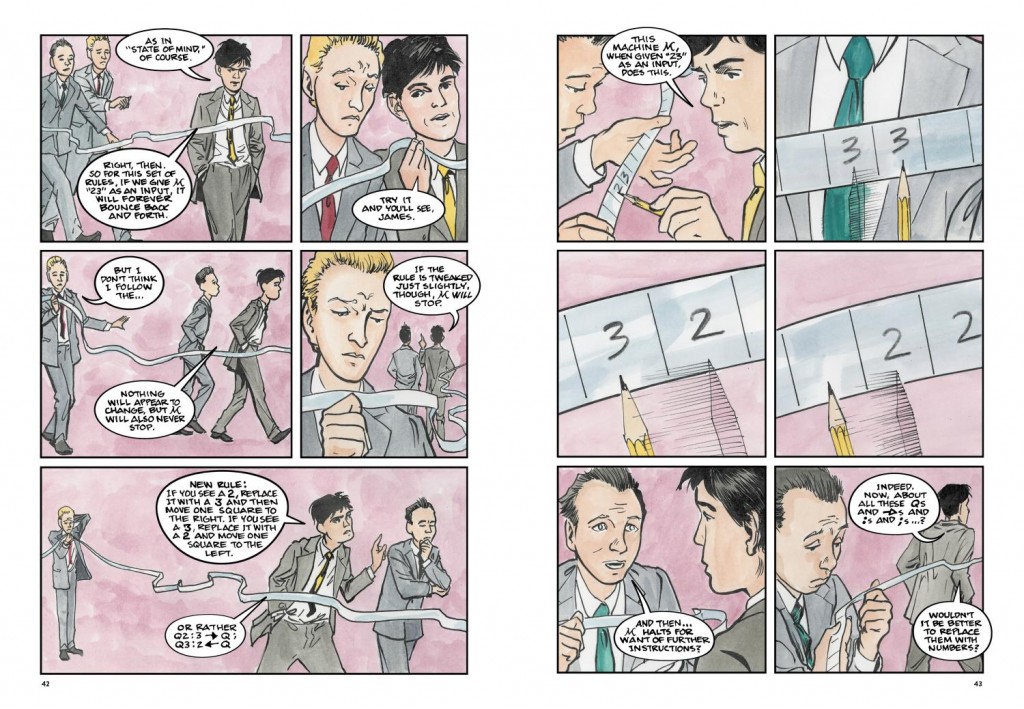 Ottaviani (who previously brought us a wonderful biography on the great Feynman) and Purvis break this look at Turing’s life and mind into three main parts, starting with his youth – school and college days, home life – then answering the call of duty during the dark days of the Second World War for secret work at the (now rightly famous) Bletchley Park, the desperate, frantic attempts to find ways into the supposedly unbreakable Enigma codes, and then his post-war life, able to show his OBE for services to “king and country” but not to ever tell what that remarkable work actually was. And of course, for those of us already familiar with Turing (I’ve admired him since I sat programming my first home computers, way back in the days when you had to learn programming to make them do anything, long, long before apps and swipes) that last act is a tragic one (potential spoiler alert for those not familiar with that history).

It would have been very easy to focus entirely on those Bletchley Park years, and indeed the material from that period would easily have filled the book. But to Ottaviani Purvis’ great credit they want to show the person, not just the historical figure, and it greatly enriches the book by taking in his younger years first. The awkward lad with a brilliant brain that seems to grasp hugely complex problems easily and solve most of them just in his head (where the rest of us would fill entire journals working on the problem for years and still be scratching our heads), and yet to whom many of the normal everyday social interactional skills were a mystery (these days it’s hard not to imagine Jim Parsons’ wonderful portrayal of Dr Sheldon Cooper when noticing these quirks).

But there are still warm, social connections there despite his awkwardness, from family, from a few select friends, including Chris Morcom, a young, intelligent friend who accepts him as he is, and who other biographers have speculated about – was he perhaps young Turing’s first crush as he realised he preferred men to women? Here that isn’t exactly downplayed, but neither is it highlighted, instead, rather nicely focusing on their friendship and shared interests, sadly doomed to end all to early as Morcom died very young (the scenes following that are both sad and very touching, showing Turing the man, not just a brilliant brain, but a person with feelings). 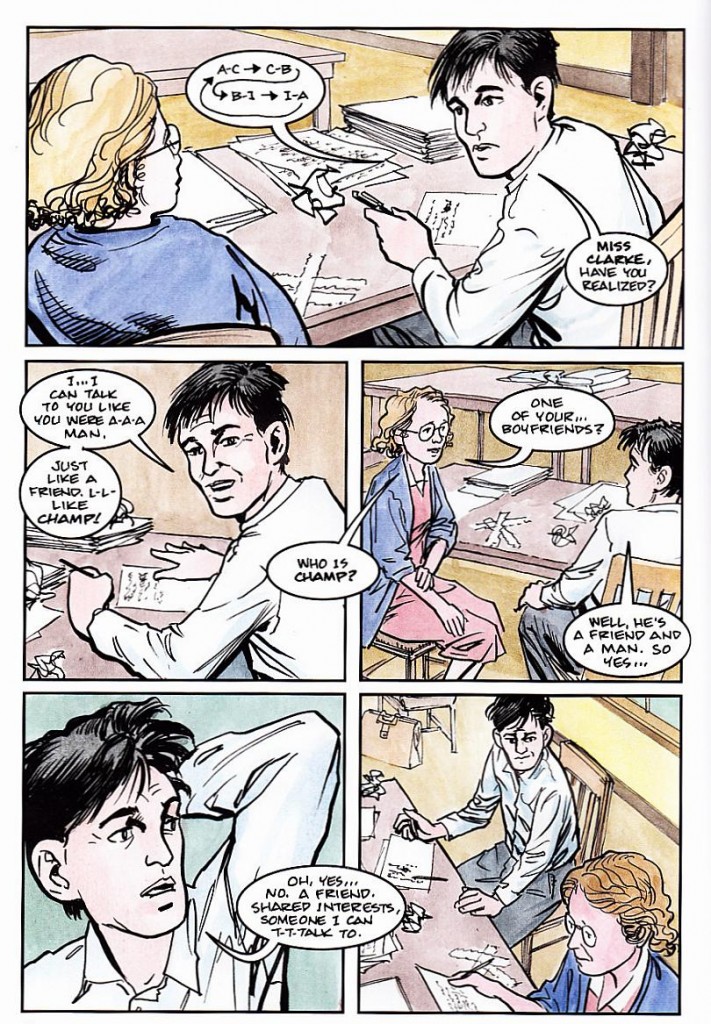 Some of the book follows Turing himself, showing him at school, college, being invited to America to Princeton where he is in the company of the likes of Von Neumman, Alonzo Church (even Einstein was there during this period), then into the wartime work and realising some of his ideas about “universal machines” could be used to help crack these Nazi cyphers, first by mechanical means (the famous “bombes” rotating and clacking away by the hundred, staffed by service woman often working in their undies due to the heat of the machinery) then (with the brilliant electronic engineering of the GPO’s Tommy Flowers) an actual electronic, digital computer, the first such in world history (although as it was a state secret for decades afterwards textbooks would give that honour to American scientists. Again those who worked on it kept their lips sealed about their much earlier efforts).

At many other points the book deviates from this approach, instead bringing in people who knew him, friends, colleagues, his mother, even his wartime fiance (who accepted even though she knew he was homosexual, because he liked her time with him), taking their turns in the interview chair, introducing parts of Turing’s life that they were involved in, as if in a documentary film. Again this very much helps personalise this story – it isn’t just about an odd but brilliant mind, it’s a person and the people who were around them. I also very much approved of the many nods to others from Bletchley, such as Dilly Knox or the “golden geese” (the servicewomen who worked there – as Churchill called the vital Bletchley decrypts, it was the goose which laid the golden eggs but never cackled. This was an era where one did one’s duties, all in it together, and did not talk about it. Most maintained that silence for decades until their work was declassified). The Bletchley segment is also something of a celebration of the “backroom boys”, the great British Boffin, the sort of chap with a brilliant mind solving amazing problems in time of need, and yet the sort who often forgets to tie his own shoelaces. 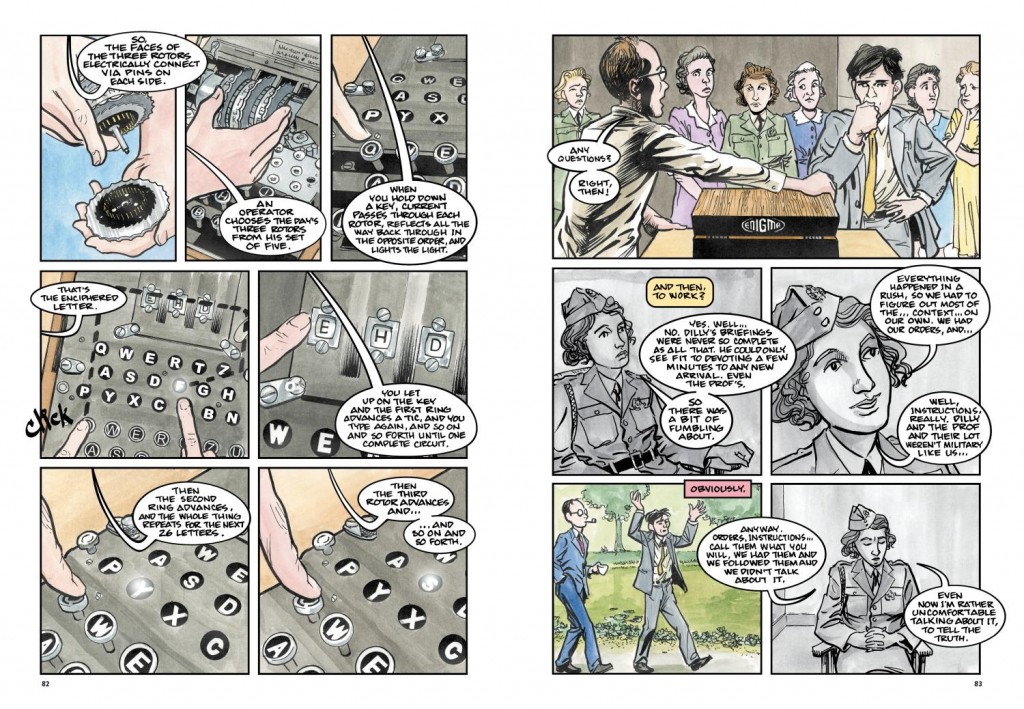 And then there is that final act, the tragic act (again spoiler for those who are not familiar with this history and don’t want to know in advance of reading the book). The postwar work, struggling to get resources like they had during the war to continue his early computing work, and the nature of his homosexuality also coming out, no real, continuing romantic relationship, just the odd fling, giving an impression of sadness and loneliness, also of frustration at work he can’t advance as much as he wants. And finally the fling which lands him before the judicial system, because this was 1950s Britain and homosexuality wasn’t just frowned upon, it was actually illegal. His status and service saved him from prison, but cruelly he was put on a probation that included taking female hormones to “cure” him, causing him illness, weight gain and even developing breasts, provoking despair and depression and more isolation. Until this brilliant man, whose work had been absolutely pivotal to the survival of the entire nation, takes his own life with a poisoned apple (beautifully foreshadowed much earlier in the book as he and a college chum go to see the new Disney film, Snow White).

The disgrace of a man who had rendered such service to his country, to be treated so is shocking still, and the question that can never be answered echoes heavily over this last chapter – what else could have come from that brilliant mind? What other innovations would Turing have given to the fledgling computer industry? But despite this terribly sad ending this is not downbeat, this is a celebration of a remarkable man and an astonishing life. Purvis uses some wonderful visual tricks to convey the processes of Turing’s mind – a scene showing the ticker tape for an early thought experiment machine flowing past him as he effortlessly walks on and his friends struggle to keep up with him was rather wonderful, likewise a fantasy scene with Turing talking with the brilliant Ada Lovelace – another innovator of the world we now live in – is beautifully depicted, and there are lovely little cameos, including a young officer from Naval Intelligence, Commander Ian Fleming (later to create the James Bond novels). 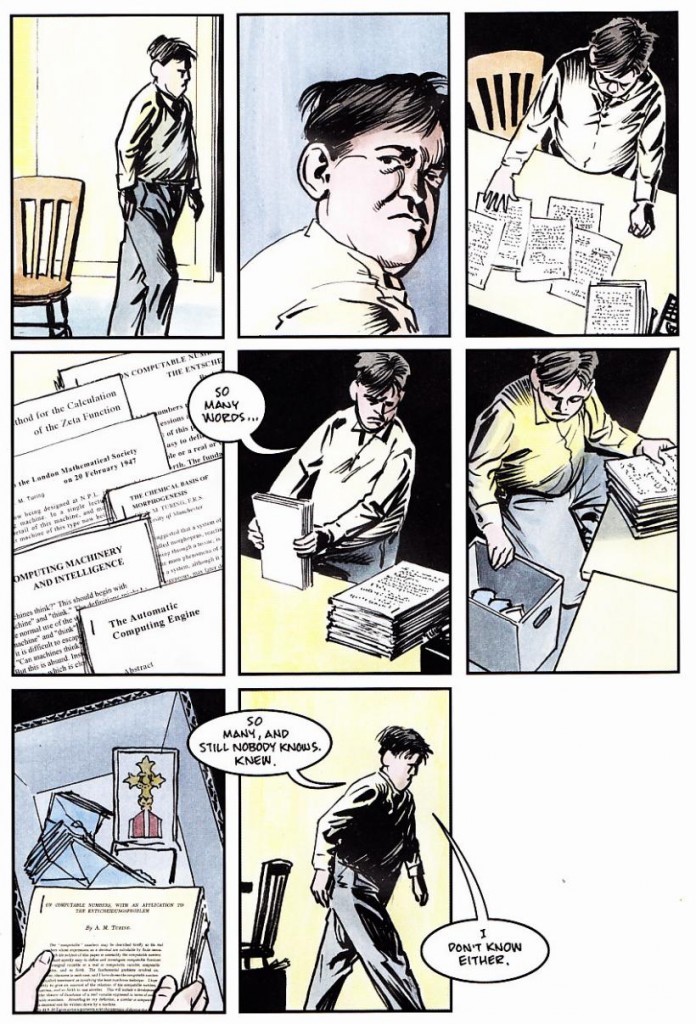 It’s a beautifully told story, both for those of us with some familiarity with Turing and that historical period, and to those who are new to it, a reminder also of the enormous debt the present and future always owe to the past and those who came before us, and what they achieved, often in the face of adversity; it celebrates an amazing man and the people he worked with. In 2009 the British Prime Minister issued a posthumous apology to Turing for his judicial treatment, in 2013 the Queen officially granted a royal pardon. Computer scientists, cognitive psychologists and philosophers are still debating Turing’s thought experiments on advanced computing technology actually being able to develop into artificial intelligence, his importance and work are still taught in academia around the globe.