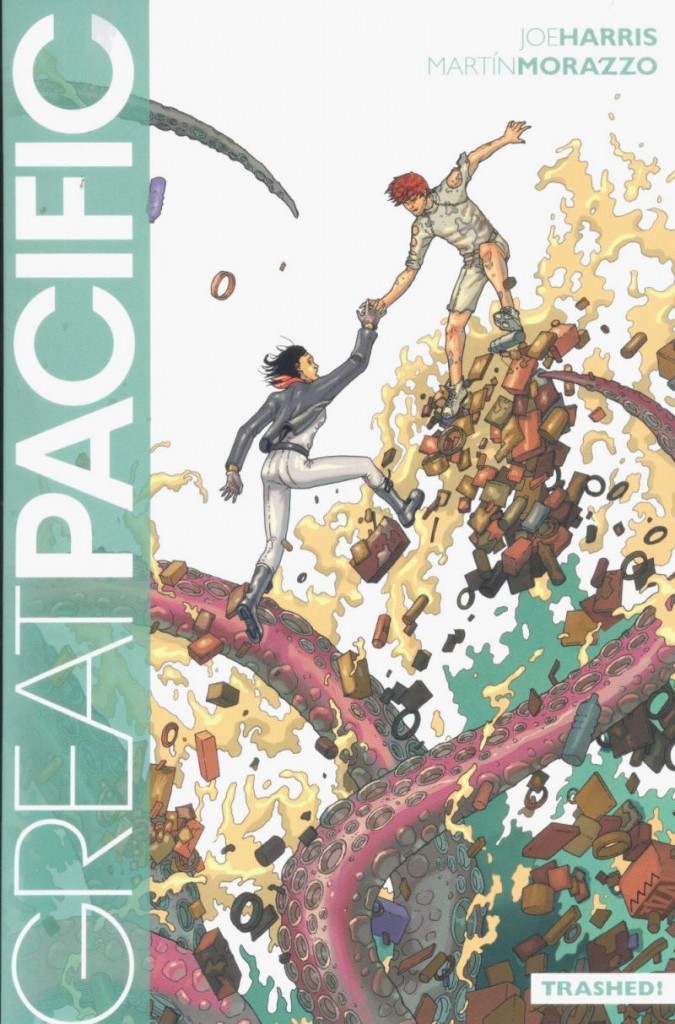 Chas Worthington, the mega rich young heir to an enormous oil fortune, known for his womanising, his extreme sports hobbies and other wealthy pastimes. The Great Pacific Gyre, a rotation of currents that creates a relatively stable spot in the vast ocean currents, where gargantuan amounts of (mostly plastic) garbage flushed into the seas slowly accumulates over years. What does this rich young man and a gigantic, floating garbage patch have in common? What about claiming it as a new sovereign nation?

Chas may lead the playboy lifestyle expected of someone in his position, but behind the scenes he has been deviously out-manoeuvring the treacherous board of directors of his own firm (who want to take more control from him following his father’s death), funnelling vast funds into a secret tech project to do with altering the physicality of plastics and planning to get necessary equipment to the garbage patch, while also making contacts in various governments with strong UN presences who he can ask to help international law recognise his claim to set up the floating plastic continent as a legal country with sovereign state rights. 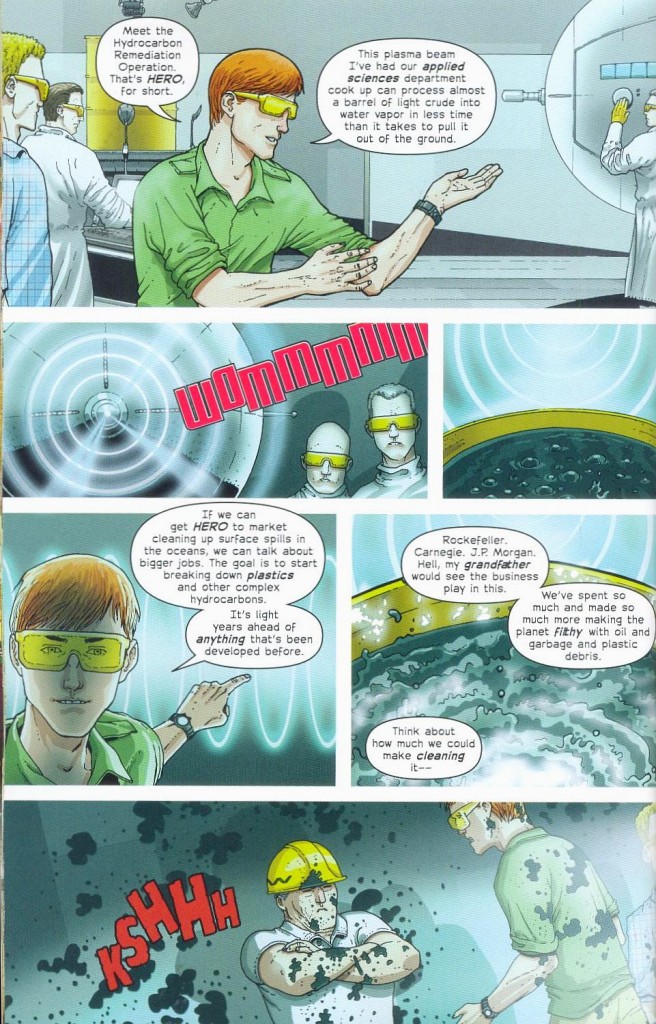 In lesser hands this could be a pretty straightforward (and clichéd) tale of rich boy who has guilt because his inherited wealth came from hugely polluting industry and wants to make amends. Joe Harris and Martin Morazzo, however, offer up a more complex and satisfying tale. Chas is not a stereotype – yes, he has done the ‘rich kid stuff’, yes, he feels guilt over his wealth coming from polluting exploitation of the world’s resources, but he’s no eco-warrior. He has multiple reasons for what he is doing, only some of which start to become apparent in this first volume. Some are indeed driven by ecological concerns, although he has seen enough of the big corporate world to know they will only back necessary changes if there is a lot of money to be made in it, hence his secretly developed new tech. Other reasons may well include the need to stand out and be his own man, make something by and of himself, not what was handed to him as a rich heir. And he’s not always likeable either, cutting others short, assuming his best friend and assistant will follow him (and not thinking too much about how much he is asking him to risk, without really telling him why) and he is impulsive, his Texan blood making him perhaps too quick on the trigger (which will have consequences).

It’s not a simple plan though; however much he thinks he has prepared and done all the relevant research, this is still something no-one has ever attempted, after all. And then there are complications you don’t expect – pirates seeking hidden WMDs, the intervention of the US government, both legally and militarily, a mysterious group of Pacific islanders who seem to have settled somehow on the garbage patch. And then there is a gigantic Octopus, which the islanders think may be a sort of god, with which he starts to form a strange relationship. The massive floating garbage patches in the gyres of the ocean were first predicted in the late 80s and are now scientific fact (see here for more), although Harris takes some science fictional liberties with it for dramatic purposes, such as making it large and solid enough to walk on and even build upon a little (very carefully!).This also allows Morazzo’s art (which at time reminds me, in a good way, of the Luna Brothers) to depict some spectacularly weird, alien landscape. 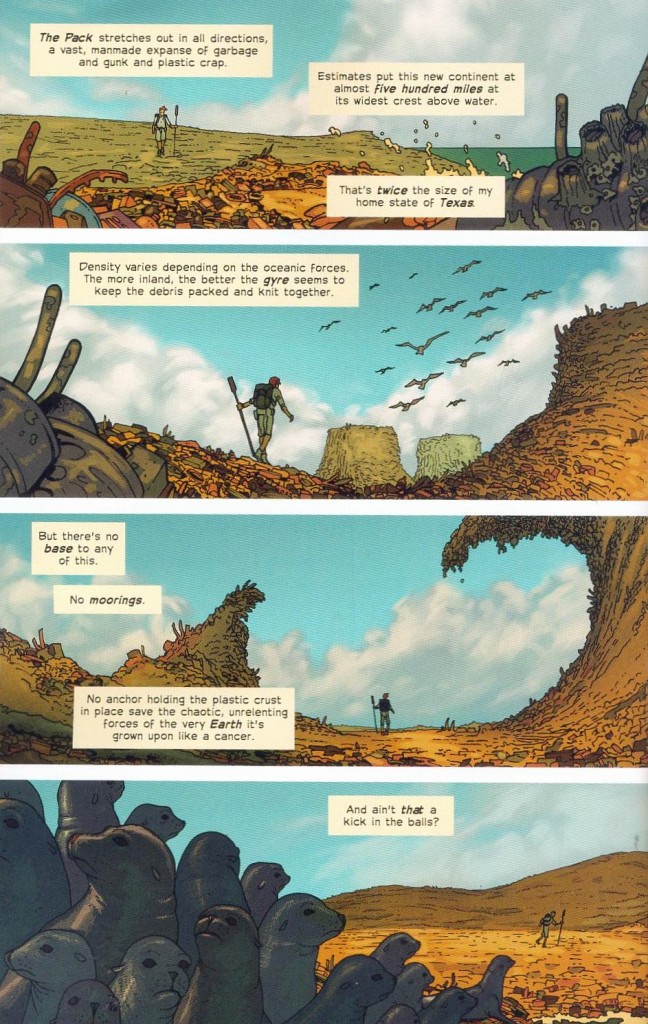 But it’s a fascinating premise, a driven and complicated young man playing at both ecology and international politics and corporate business at the same time, in a setting which only exists because of our civilisation’s own wastefulness of material and uncaring methods of disposing of our unwanted rubbish. Clever and intriguing, drawing on several contemporary global concerns, not least pollution of our environment, exploitation of dwindling resources, divisions of wealth, power and influence and corporate-goverment interests and powers (or abuses thereof). This took a very different path from what I originally thought it might be, which pleased me no end (I love when a storyteller throws me a curve ball and hits be some something I wasn’t expecting) and I’m looking forward to the second volume. Plus, y’know, it had pirates and a giant (and perhaps intelligent and aware?) octopus, what’s not to like?! 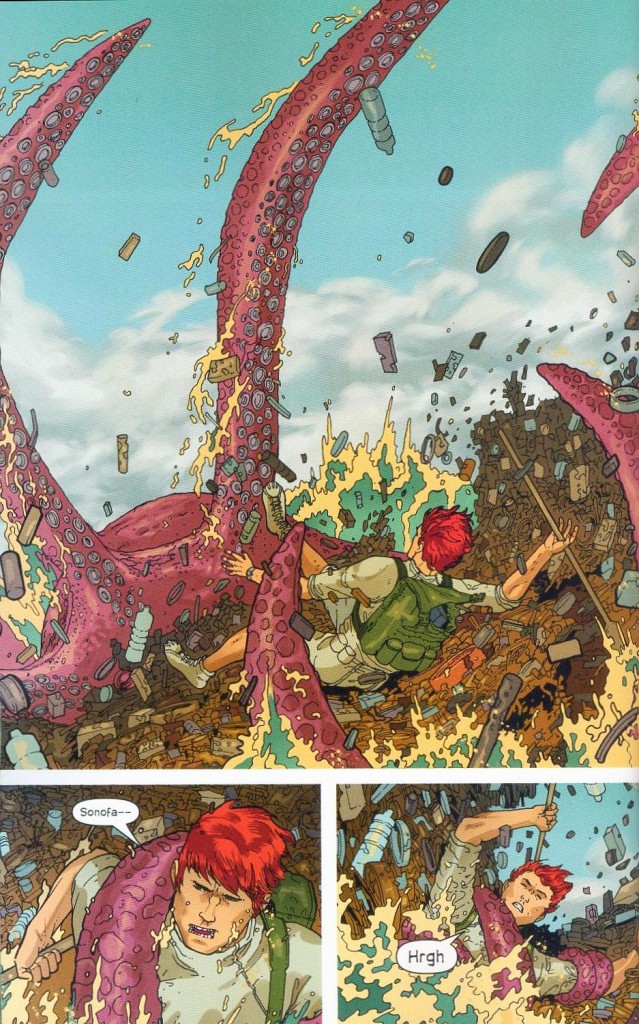