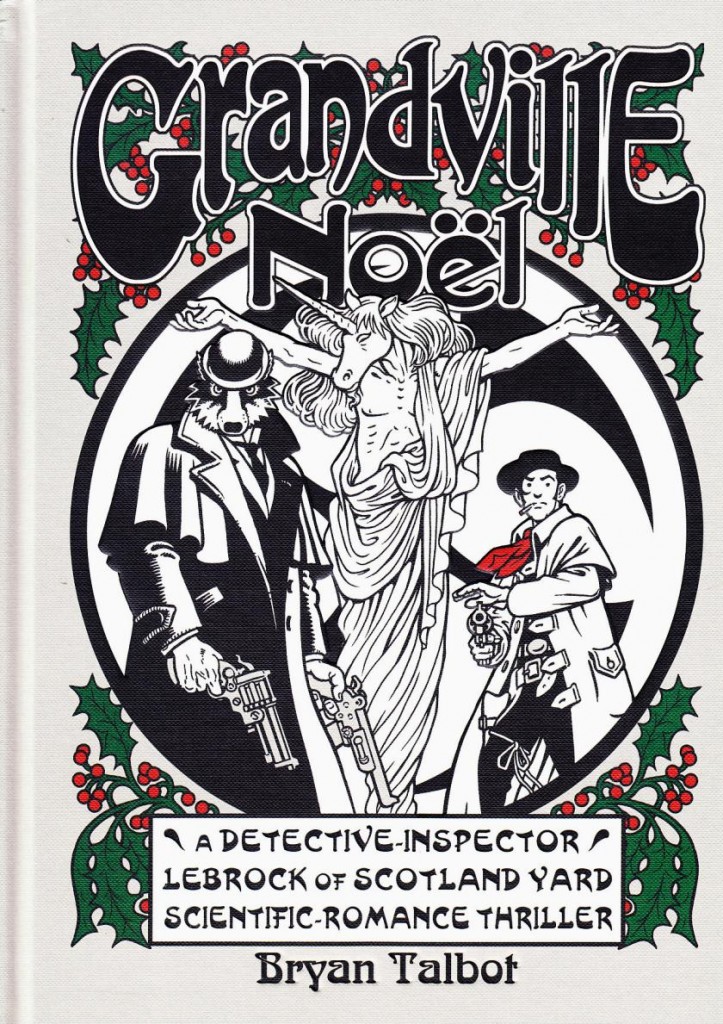 The fourth album of Bryan Talbot’s magnificent Grandville series arrives from Cape (just in time for you to add to your Christmas “I-Want” list). Each of the preceding three volumes has made my Best of the Year list, I’ve absolutely loved them. Talbot, of course, is more than a very gifted artist, he’s a superb storyteller, not just in terms of creating a cracking narrative to draw you in and filling it with wonderfully realised characters, but also because as you read his books you can feel the thought and care that has gone into each panel, even slight touches  added with great deftness to achieve just the effect on the reader that is required (and I know full well there will be techniques and devices employed which are almost inivsible to the reader but picked up subliminally, adding to the effect in the way a tiny pinch of herbs mixes with other, larger, more obvious ingredients in the perfect dish). Grandville: Noel not only carries on this tradition, I think it surpasses it: pitch perfect story, the balance between adventure and humour, bravery and shock, the elements that clearly draw on current worries in our own society (something the best science fiction has always been good at) and some glorious artwork to give us the finest Grandville volume yet.

We start thousands of miles from this Steampunk alternative Paris, in the compound of a religious cult in America, being surrounded by baying citizens, held back by police as the army is deployed; you don’t need a knowledge of Jonestown or Waco to realise that this is not going to end well. But before the place can be stormed the messiah of this particular cult – a remarkably rare unicorn going under the name Apollo – appears before the robed cult members, telling them they are all now about to ascend to a new level of being… Sadly this approach to a supposedly higher form of being is, like the infamous Heaven’s Gate cult incident, is taken by ingesting poison. However, Apollo himself, his old, now broken down mentor and a power hungry Gryphon (another rare creature) and a few truly brutal-looking guards (all of them pigs) have not taken the poison and instead flee to a prepared airship. All of this happens within the first half dozen pages. 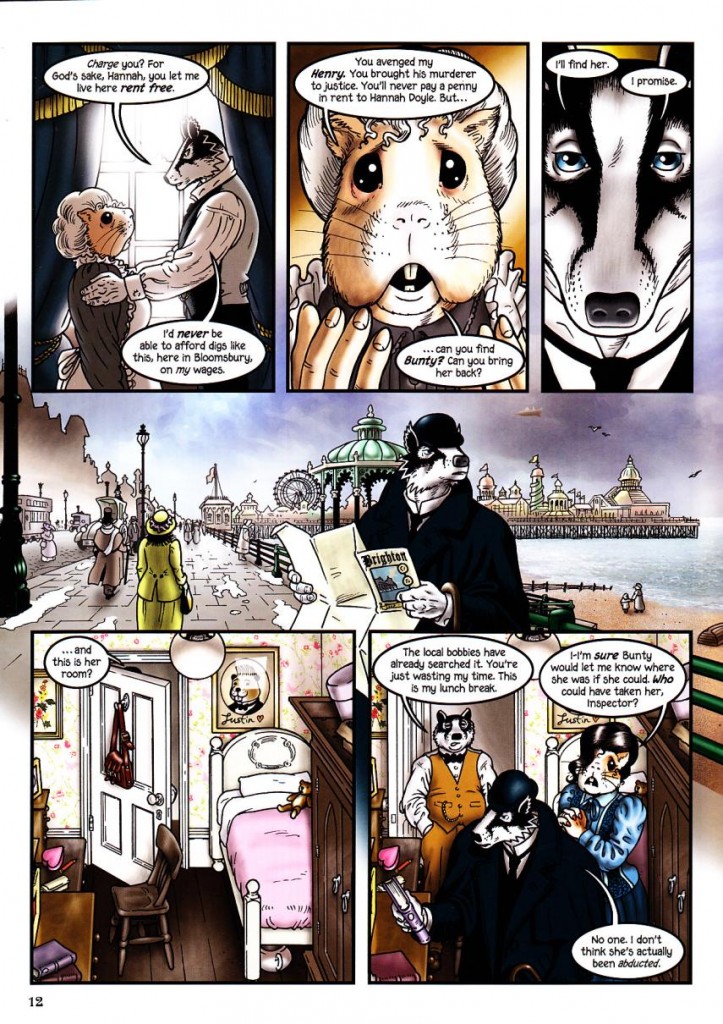 But what of our large badger chum Inspector LeBrock of the Yard and his solid companion detective Ratzi? The pair have something rare for those who work for the emergency services – a festive period off. Ratzi retires to his large home and family, leaving LeBrock on his own. Noticing his landlady is upset he soon encourages her to explain what’s wrong: her sister’s daughter has run off, just a young, teenage girl. Naturally our gallant badger undertakes an investigation of his own, picking up small clues the local police overlooked, which soon lead him to a religious cult via a believer on the streets nearby giving out leaflet (leading to some superb expressions, not least on the religious zealot’s face as LeBrock bears down on him. It isn’t long before the trail of the missing girl, Bunty, leads our intrepid inspector back to Paris and the new headquarters of Apollo and his followers, along the way taking in a joyful reunion with Billie, the Parisian lady of the night who LeBrock is rather keen on, his old friend in the French detective service and tangling in both a new gang war as a vicious but remarkably rarely-seen new kingpin, Tiberius Koenig (yes, there is a clue in that name, which I shall not spoil) who has been taking over all criminal operations in Grandville, and also a search for fabled – possibly mythical, perhaps real – religious documents that could reveal something shocking (and which Apollo also wants), as well as a growing civil unrest by the ‘doughfaces’ (derogatory terms for humans) demanding equal rights (including a cameo from a couple of very familiar faces!), and in the absence of Ratzi a new partner events push him to working with, a doughface cowboy from Pinkertons, “Chance Lucas”, a gunslinger who can pretty much outdraw his own shadow (yes, I think  you can guess which famous comic character he alludes to!). 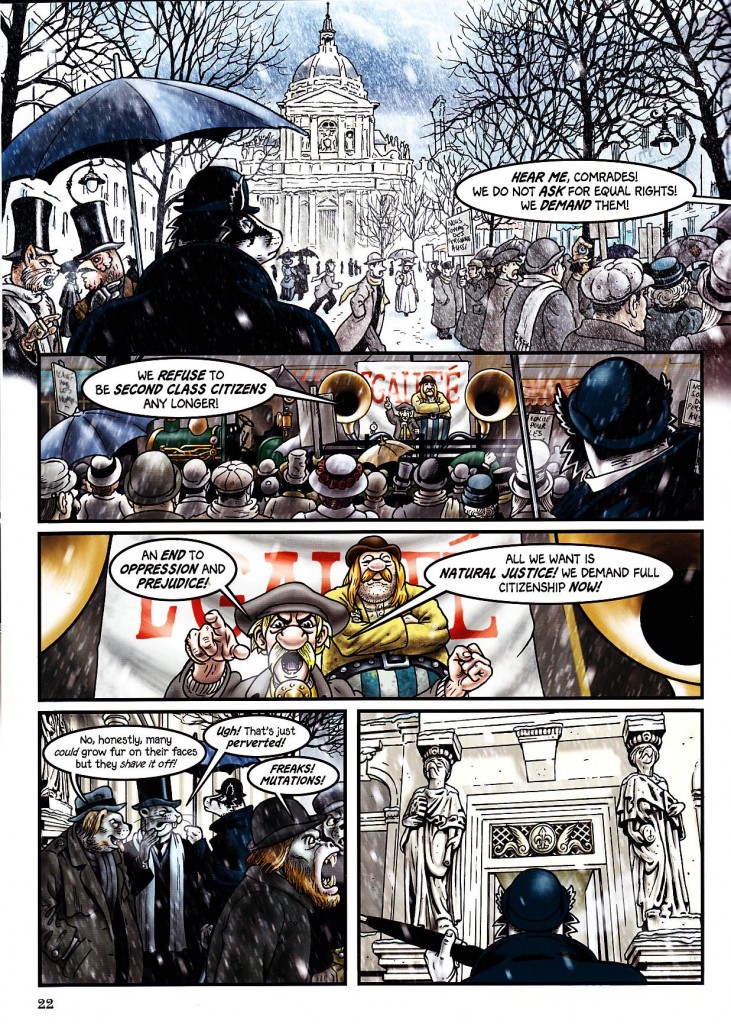 And the brief summary of Grandville: Noel doesn’t really give you more than a small taste, but I am reluctant to spoil it for you with too much in the way of narrative detail, because it is an absolute cracker of a plot, buzzing along happily and a terrific pace, developing nicely, the main thrust carrying on swiftly but Talbot still allowing plenty of space to work in some increasingly blossoming romance with Billie and LeBrock, some bonding with Chance, some sidebar elements which at first seem to be merely adding some interesting detail to the history of the Grandville universe but which are woven back into the later narrative with great deftness, and also managing to layer in some elements which comment on topical modern concerns, not least the alarming growth of right-wing extremism and xenophobia across Europe and the way both religious and political leaders can use whipping up hatred of one group and playing on exaggerated fears to manipulate many into supporting actions they would never otherwise countenance (which even in this alternative reality includes some iconography, uniforms and rhetoric that look chillingly familiar, a reminder of where this sort of ‘hunger politics’ leads to). And then the cream and cherries on top of some beautifully done references, executed with a much lighter – and more effective – hand than some of the references dropped into later LOEG books, for example, including, appropriately enough given the nature of this story and the Apollo character, some religious allusions, such as a Last Supper scene. 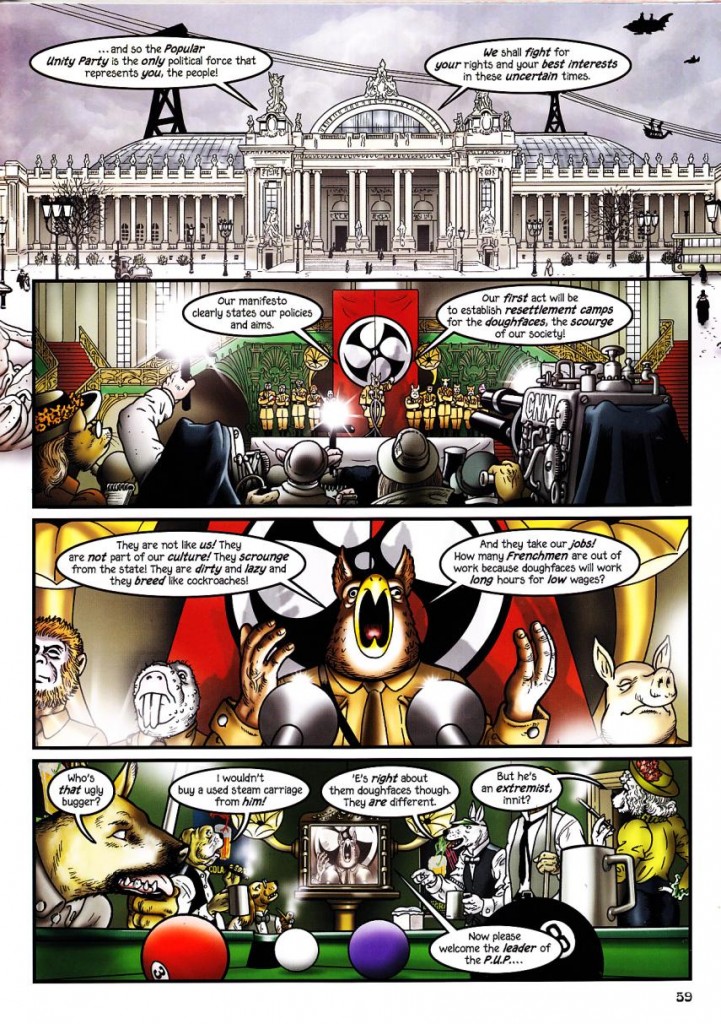 And again without going into to much in the way of potentially spoiler-territory details, there’s also a deeply satisfying feeling, especially in the latter third of the book, of the events of this book and the preceding three contributing to some major events which feel like they will be bearing down in the future on LeBrock, a very pleasurable feeling of everything coming nicely together into a larger story and sequence of events. We also get some fascinating glimpses into the history of the universe Grandville exists in, with Talbot, not for the first time, making a nice odd to some Moorcockian ideas of realities. Both of these elements of greater events building and the increased detail of this alternate, Steampunk, animal–dominated world seriously add to the depth and feel of not just this book, but the entire series so far. The art is, as you would expect, superb – I’ve already noted some of the wonderful close-ups Talbot executes of the characters and their expressions, while the cityscape of Grandville, this Steampunk Paris, remains as visually ravishing as ever, while on the smaller scale there is some fantastic layering effects – breath misting in the cold of a winter’s day, snow flakes falling – which contribute to giving an almost three dimensional feel to some panels, a true feeling of depth, be it a small street scene of characters talking in a snowy street or a huge splash page of dashing action as Lebrock leaps from an explosion. Adventure, conspiracy, hidden histories, religious and political plots, the dangers of intolerance, some comedy, some romance, heroics… Really, what more can you ask for? Simply superb, the finest Grandville yet – I read this twice, back to back on a train journey, I feel like another read and also like having a nice re-read through the first three volumes again too. Lose yourself in it.