Another of my almost-lost reviews from years ago – tis review of Frank Barnaby’s science/history book was first written for The Alien Online back in November 2003 and was quite pertinent at the time as rows over the claims for WMDs in Iraq pre-invasion then the failure to find any post-invasion and the idea that we had largely been lied to by governments to justify the war was growing.
How to Build a Nuclear Bomb and Other Weapons of Mass Destruction 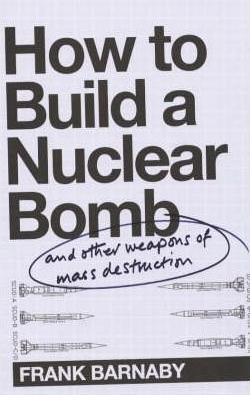 How I learned to fear the bomb and start worrying more

Okay, first off, despite the cheeky title this is not a manual on the construction of thermonuclear devices. So those of you who were technically minded and looking for a project to occupy you over the long winter nights can stop reading now. What this little book actually does do is act as a handy-sized, easy to understand primer on Weapons of Mass Destruction – those WMDs all the cool kids are talking so much about these days.

Barnaby, a nuclear physicist who worked at Aldermaston, amongst other places, lays out concise explanations in a language easily accessible to the layman, describing each of the three main WMDs: atomic, biological and chemical (now you know where 2000 AD’s ABC Warriors got their name from).

The section on each type of weapon system is then broken down into brief overviews explaining the history of the weapon’s development, how they work, how they can be deployed by governments or small groups, what effects they have and, even more depressing, the history of their actual use, from chemical weapons on the fields of WWI Flanders to nuclear annihilation over WWII Japan.

This is not to say that Barnaby is an alarmist. Far from it; in fact he seems to have written this sensible book in order to counteract the souped-up hyperbole of the mass media in our post 9-11 world and the dreadful spin (if not actual misleading or even lying claims) about WMDS from governments. He has aimed to cut through this and produce an effective introduction to let the thinking person understand some of the real history, possible effects and uses of WMDs. In this respect I’d say he was extremely successful. For example, I now know that WMDs are not in fact invisible. Which does make me wonder why the US/UK can’t find all those ones in Iraq.

Although very informative, this book is, almost by its nature, disturbing reading. Describing how simple it is for someone to create chemical or biological weapons is frankly terrifying, and the example of the Tokyo subway attack using Sarin (the group responsible also had produced Anthrax) highlights the danger. The fact that immensely wealthy and powerful international pharmaceutical companies have used their might to stymie effective checks on production facilities in case someone is using them to secretly create bio or chemical weapons is even more alarming. There is no international system of checks – as exists for nuclear facilities – because the companies are too worried about possible industrial espionage and are prepared to put the lives of others at risk to protect their profits.

This is unlikely to be of surprise to anyone who has followed these same companies’ years of trying to block cheap, generic drugs to third world nations, but it is still more than a little astonishing that even in the current political climate there is no body to check up on chemical and biological facilities world wide. Given their history – look how many such weapons were created by IG Farben in Nazi Germany alone – you’d think the industry would be a little more safety compliant.

There was one aspect of this book that was even more horrifying and disturbing than this however. This dealt with the history of the deployment and use of WMDs. Often by the same ‘responsible’ governments who now act out military adventures to supposedly save civilization from madmen armed with WMDs. Chemical agents dropped in Vietnam, gas weapons used by Germany, Britain and France in World War I and, of course, the nuclear fires over Hiroshima and Nagasaki that burned the horror of WMDs indelibly into the public mind for all time in much the same way as they burned people’s shadows into the walls.

And before anyone argues that these events are being taken out of historical context, Barnaby discusses the vast destructive arsenals Russia, Britain, America, China and France hold to this very day and are reluctant to get rid of, while trying to ensure other nations do not possess similar weapons; although to his credit he does not take a political stance on this, merely reports the facts.

So, yes, this is disturbing material, but if you follow current events then you should know this stuff so you can try and cut through the spin and scare-tactic headlines. Information is a weapon every bit as effective as WMDs and its one weapon we should all have access to.