The king sighed deeply. So few are left, he thought, so few, the last of my troops surround this final redoubt, this last keep. Most have fallen and now lie still upon the earth; the enemy is at the gates, the deep, chill darkness closes over all we are and we no longer have the strength of our greener days to withstand it. A final charge and it shall overwhelm our tattered, broken defences. Again the king sighed and regarded his now ravaged, increasingly barren kingdom. We shall all soon vanish beneath the approaching darkness, he told his few remaining subjects, but, he told them, holding his head high, no darkness lasts forever. We shall rise once more and it will be glorious. The king of the tree made his solemn promise to his remaining leaves and turned from autumn to face the shadow of winter.

Time to dig out another old review from my archive, this time by one of my favourite authors, Neil Gaiman and his novel American Gods. I remember doing the event in Edinburgh (packed, standing room only) with Neil when this book came out and I’ve still got a nice signed edition he scribbled in for me afterwards. I can’t remember if this appeared on the Alien Online or not, I think it might actually date to my own first review site The Library of Dreams, back around 2001 or thereabouts. I seem to remember Neil had been wanting to write it for a while but had still been busy with a lot of his comics work and so this large prose novel had to wait, but it was worth the wait. 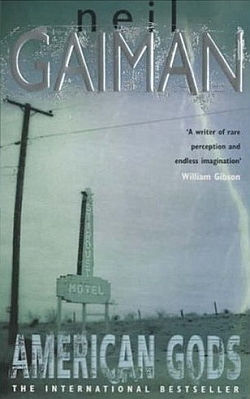 American Gods begins simply enough with a man called Shadow, counting the days until his release on parole from prison. A few short days before he is due to be released he is taken to the warden’s office to be told he is being released early on compassionate grounds. His wife has been killed in a car crash, just days before he was due home. Worse is to come when Shadow attends the funeral and finds his wife had been sleeping with his best friend and had actually caused the crash by giving him fellatio while driving. As Shadow’s new start in the world crumbles around him he is followed by a one-eyed stranger called Mr Wednesday. Wednesday offers Shadow a job, which he refuses at first, but wearily agrees to after the funeral is over. He is not told what the specifics of the job are, but he does find himself in a bar, drinking Wednesday’s mead to seal the deal and fighting a drunken leprechaun called Mad Sweeney by way of an audition.

Thereafter Shadow travels across much of the land of America. Some of it and its inhabitants are recognisable, other parts and people are more like the dream imagery of America described in film, painting and literature. Shadow senses a great storm coming and Wednesday confirms that this coming storm is what their business concerns. After performing a successful con job at a bank to raise funds for their venture they begin seeking out some very odd people, who Wednesday arranges to meet at the House on the Rock, a bizarre attraction of run-down fairground oddities and architectural curiosities.

While riding the world’s largest carousel there, Shadow experiences an alternate reality – a dream perhaps, or a glimpse of shadow worlds – where he sees many of theses people they have collected in their real light. They are gods. Old gods. Gods who were brought across the great oceans by the many waves of immigrants from the Old World. Wednesday was brought to the Americas centuries before, in the beliefs of the Vikings who ventured to this strange, new land. His wolves and two ravens appear. He is Odin, the one-eyed gallows god. And he is seeking to gather together all the old gods in America because a storm is coming.

Although many of the Old World gods made the journey to the New World with the people of their old lands, they are fading away. America is not the most fertile ground for such beliefs, it appears. As the successive immigrants have settled down and assimilated themselves into American culture, belief in the old ways and old gods has diminished, until most are simply tales to be told to children. Without belief a god dwindles, weakens and fades. Some seek to exploit this weakness of the older gods.

A new generation of gods has sprung up. American gods. Gods of the media, the television, the Internet, pop music, Wall Street. These are the gods of the New World, and they do not wish to share it with the gods of the old. Driven partly by jealousy and partly by fear – the old gods, after all, are a reminder to them that even a god’s life is finite – the new gods will wage war with the old. They try to co-opt Shadow to join their ranks, as the gods of the media bring his television to life. Lucy speaks to him from an old re-run, trying to persuade him to come over to their camp. She finishes with a wink and an offer to show him Lucy’s tits, surely one of the more unusual lines in contemporary fantasy. Shadow refuses and is attacked by strange men-in-black – the realisation of America’s security services, they even have unmarked cars and helicopters – but is rescued by his dead wife, Laura, who he may have accidentally resurrected.

Wednesday sends Shadow for safety to stay with old friends, Mr Bis and Mr Jacquel, who run a small mortuary and funeral service, with their cat who takes a fancy to Shadow. Times are hard when no one believes in you, and so Anubis makes a living now as an undertaker. After leaving them, Shadow is sent to the relative safety of a small, idyllic heartland town of Lakeside. A seemingly perfect little town, immune from all the ravages of the real world affecting the towns around it, Lakeside is like Bedford Falls, the small-town American ideal. Of course, there is a dark reason as to why Lakeside is the way it is, as Shadow finds out, a sinister reason linked to the almost annual disappearance of an adolescent from the town. Even in the idyll of rural America, nothing is just as it appears. And still the war is coming. Wednesday is manoeuvring friends and foe alike, and not necessarily all for their own benefits. Shadow will face death, the underworld, dreams of the great native Indian Thunderbirds and battles with duplicitous gods, occasionally helped by his dead wife, leading to a conclusion which is unexpected and startling.

American Gods has been a cherished project of Neil’s, that he has been working on for some time. It has been postponed more than once, but the final 500 page plus novel is more than worth the wait. Alright, you all know I am biased towards Neil’s work. Guilty as charged. But I think anyone who reads this wonderful work of fantasy will being to see just why I rave about his writing so much. American Gods is an extremely clever piece of fantasy, mixing some wonderfully original storytelling with world mythology and folklore. This is not an uncommon theme in Neil’s writing, and of course, we have seen him use Odin and Loki before in the Sandman. But the juxtaposition of these brilliantly realised mythic archetypes from the Old World with the belief systems of modern America is the charm, which breathes life into this clay. Neil’s observance of America, its beliefs and how it sees itself are both affectionate and cutting. The idea that we create new gods without realising it, such as gods of the media or Wall Street, is intriguing – we all worship something after all, a deity, liberty, money, love, possessions. It echoes Grant Morisson’s early Invisibles episode where it is revealed that John Lennon now has all the attributes of a god.

The new gods represent this idea, that our beliefs may change, but gods will always be with us, because we create them ourselves, whether we are worshipping the dollar or a pop star. They’re not called idols for nothing after all. And when a god is no longer worshipped or remembered they fade slowly away, reduced to performing con jobs like Wednesday to get by as best they can, like a once-famous actor now scratching a living from commercials. Even gods can die, and this frightens the new gods even more than sharing America with the old gods. The old gods represent their own mortality. Worse, in our hi-tech, fast-moving, short-attention span world, belief in the new gods is far more fleeting. While Odin may have commanded worship for centuries, many new gods are discarded quickly, such as the sickly Rail Baron god. Not enough belief to go around for everyone, every god for themselves.

American Gods is one of Neil’s finest works to date. If you have not read any of his work before, this is an excellent starting point, as it needs no knowledge of his other material to understand. If you are familiar with Neil’s canon then you will be rewarded by little literary nuggets. The room in the House on the Rock, full of old coin-operated shows which is reminiscent of the arcade in Mr Punch. The girl with the multi-coloured hair and the dog, who may or may not be Delirium. As ever his work is littered with multiple references to other writers. Of course his beloved James Branch Cabell, but I’m sure I spotted references to, or influences of many others, such as Sheri S Tepper and Lord Dunsanay, to say nothing of the Frank Capra homage to Bedford Falls in the shape of Lakeside, which in turn becomes a homage to David Lynch’s skewed take on the hidden side of American small town life in Blue Velvet. If you are looking for dense, multiple layering of narrative and metaphor, then Neil’s your man. This is a work of first class literature, bursting with gorgeous ideas and characters, both original and those from our collective mythologies. Like any truly good piece of writing, it will change the way you view the ‘real’ world.