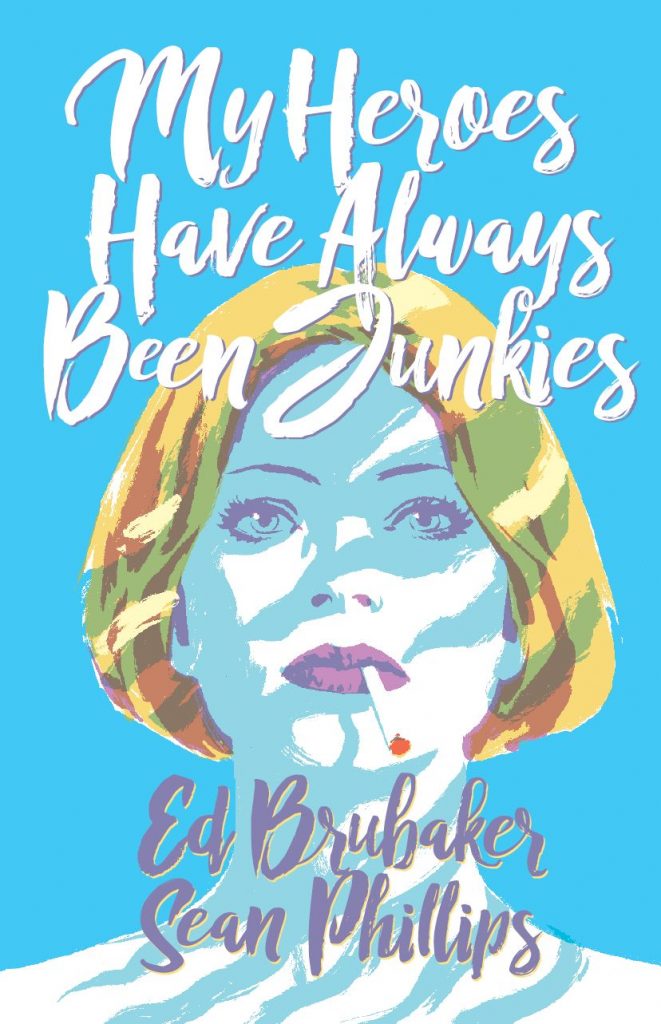 “What if drugs help you to find the thing that makes you special?”

Ellie and Skip meet in the group therapy sessions at the addiction clinic they’ve been committed to, one of those “circle of truth” approaches many therapists seem to love and pretty much everyone else hates. And like many such groups, the “true” stories the patients are made to share are frequently less true than the therapists would like to think – addicts and their ability to lie to suit their circumstances are an integral part of this tale; you really can’t trust what they say about themselves, their past, their motivations.

Which offers up the reader a pretty interesting dilemma – we’re presented with these oh-so-young characters, and we can’t entirely trust what we learn about them. While that is quite a clever device for generating suspense and intrigue for the reader (no godlike narrator who tells the reader everything, we have to take bits and pieces and try and decide which are true), it could also have been a problem. After all, if you can’t be sure what the characters are really like, how can you start to buy into them, empathise with them? It’s an approach which could alienate the readers, but this is Brubaker and Phillips we’re talking about, and they take that potentially double-edged approach and use it quite brilliantly; despite, or perhaps even because we can’t trust their accounts of themselves I found these characters utterly irresistible. 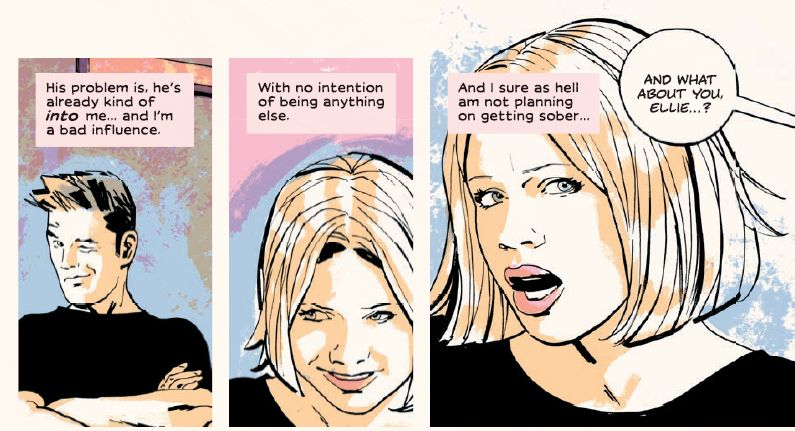 To begin with this feels like the classic star-crossed lovers, a young woman, a young man, pushed together by unusual circumstances, bonding not just through their shared youth but the confinement and the rules of the sanatorium, chafing at them, leaving them eager to strike out against those rules and authority figures. Romeo and Juliet by way of One Flew Over the Cuckoo’s Nest. Those rebellions start small – stealing the head doctor’s cigarettes while she is being lectured (a nice touch, the person telling her how to beat her addiction and how wrong it is to indulge thinks nothing of puffing away on her own addictive thrill while doing so), sneaking out of the building at night to smoke, talk, to make out. Romance and an up-yours to the authority figures at the same time.

This is beautifully handled – Phillips brings just perfect little touches to the visuals, such as a close up on Ellie’s face during the group therapy, her inner dialogue contrasting with what is being openly said in the group session, her gaze catching Skip’s as someone else talks, the expression just perfectly rendered, an elfish, knowing smirk that captures in a single panel how she’s feeling at that moment (as she admits to being a bad influence and having no plans to change), then the following visual interchange between them as the group and therapist continue unaware. 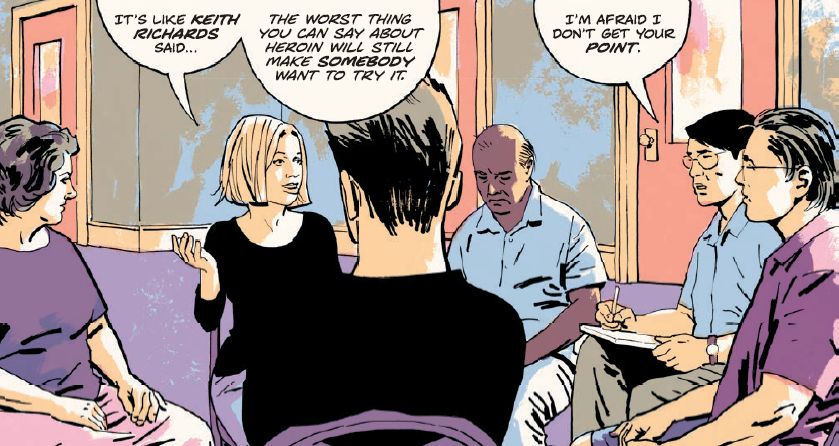 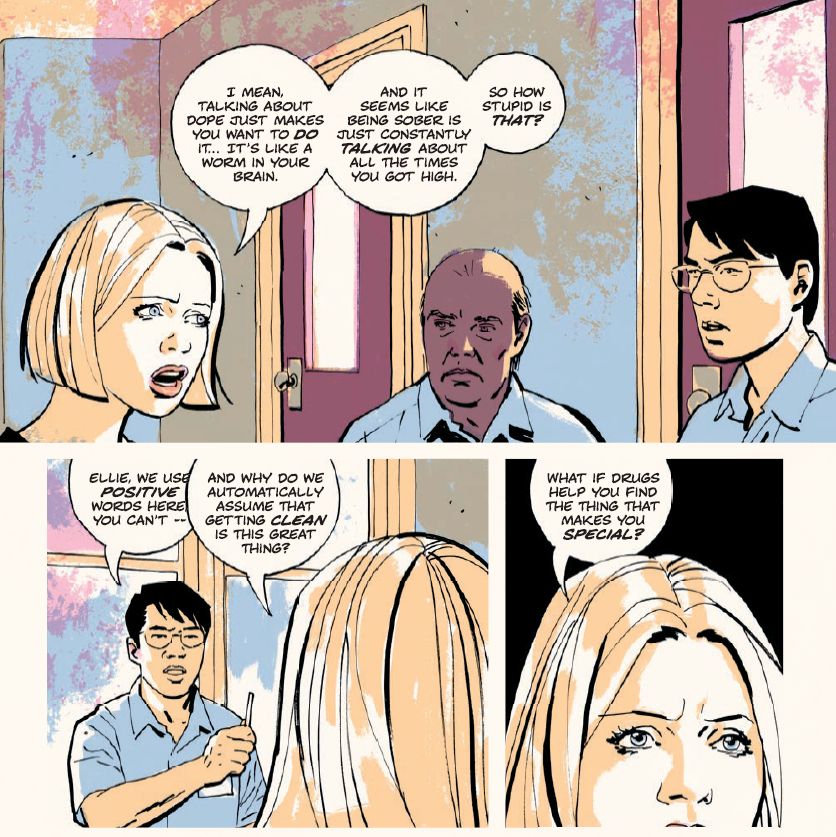 That rebellion will grow, however – sure these are young lovers, full of screw-you attitude, and it is easy to go along with their joie-de-vivre, to hell with the consequences approach. There’s always something intoxicating about that youthful rebellion and we-know-better-than-everyone pose. Except we know there are consequences, and, as noted earlier, these are addicts, we can’t entirely trust their motivations or their life stories. Not everything or everyone is what they seem here, and there will be some revelations, some may not be what you might imagine, although I shall say no more on that front for fear of spoilers.

“I guess Billie Holiday is where it started.”

Threaded through all of this is a love of music, of how important music is in many of our lives, how sometimes it feels like a singer has written those lyrics just for us, the soundtrack to moments of our lives. And particularly here so much of the music Ellie loves was created by performers who struggled with addiction. There is a morbid sort of glamour to that, and come on, any of us who love music know that, we’ve felt it – actually we’ve felt it not just with music but with poetry, prose, pretty much every artform humans have crafted has been touched by those who have indulged, many argue for the better. 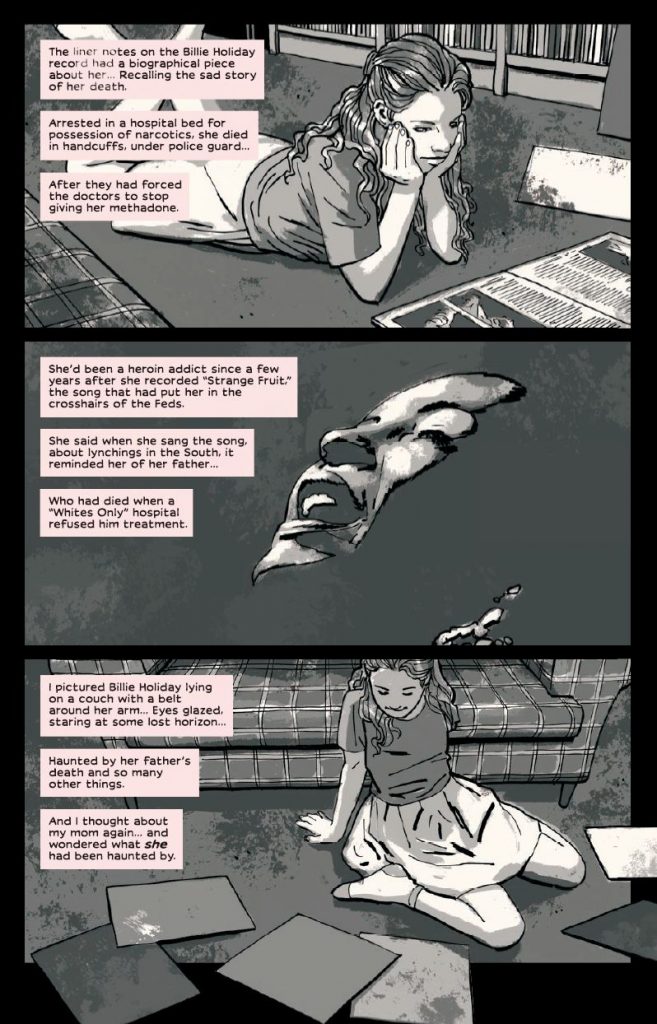 There are shades of the late, great Bill Hicks here on his stand-up diatribe on the War On Drugs, where he acknowledges the damage drugs can do but also notes how nobody picks up on the other side of it, like the stunning music that came out of some of that psycho-chemical experimentation, the old kicking open the Doors to Perception. There’s a fascination, even a sort of sick romance about all of that, especially tied to that spirit of youthful rock’n’roll rebellion, most of us have felt it, maybe even flirted with it even if just in imagination while blissing out to that music. Ellie tells the therapist as much when it is her turn to talk in the group sessions. 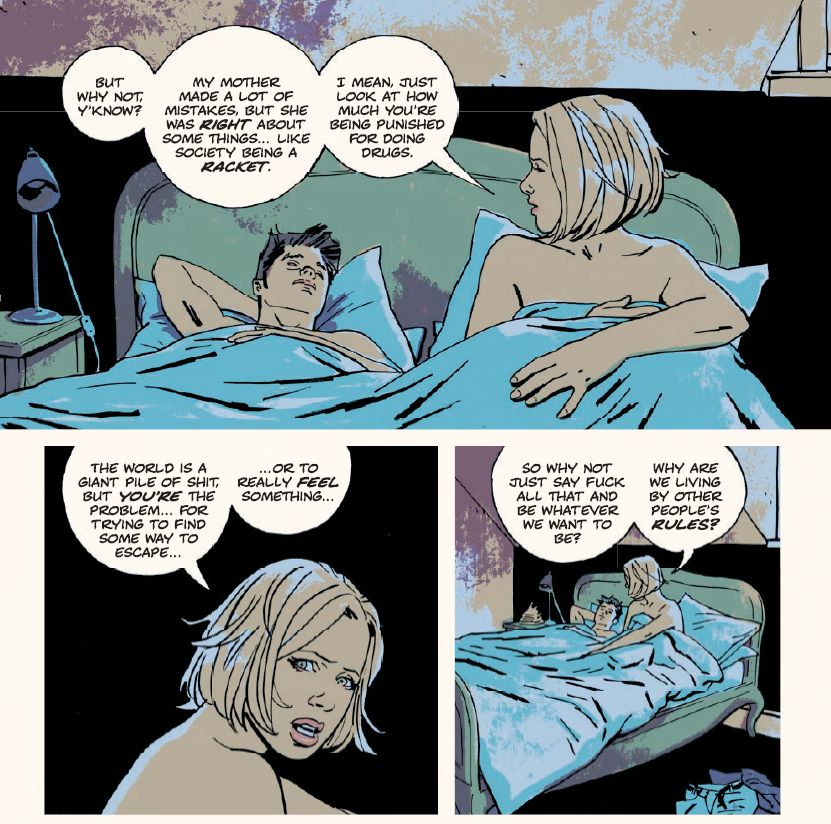 Like Welsh’s Trainspotting though, this book doesn’t glamourise drug use, it shows the mess it can and does make of lives, but it also, like Trainspotting, shows the highs and why they are so attractive – addictive. My Heroes Have Always Been Junkies doesn’t get on the soap-box to preach condemnation, nor does it paint that lifestyle as overly romantic, it mixes both, showing that just like everything else in our lives the positive and negative aren’t always clearly separated, they can be messy, intertwined. That theme is in itself attractive and compelling, but here it is just the garnish to an engrossing story, with shifting sands beneath the changing characters that draw you in deep. It’s simply brilliant. And you’re really, really going to want to make a good playlist to go along with your second reading. I’m starting with some Billie…

This story from the Orlando Sentinel has to be one of the best weird stories of the week: screams for help in the middle of the night lead locals to call out the police, who arrived by a dark lake to find a naked man who had been smoking crack fighting off an 11-foot alligator. Speaking to the Woolamaloo Gazette later the alligator, Snapper LaCoste, said he had been trying to make a citizen’s arrest. “This lake area used to be a great neighbourhood,” he remarked, “but these damned junkies come here smoking and shooting up, now running around naked. The whole area has gone downhill, you don’t dare take the kids out to the park, litter and drugs detritus lies around the area. When I saw this naked junkie I saw red and decided if the cops wouldn’t take action, I would and made a citizen’s arrest. When he resisted I was forced to attempt to eat him.”

I’ve just finished reading Reefer Madness by Eric Schlosser, author of the excellent Fast Food Nation. As with his previous work Reefer Madness covers rather more subjects than the title give you to suppose.

Rather than adding to the large body of work on subjects such as the social effects of cannabis use, Schlosser instead examines the economic impact it has on American society. He covers the legal system and the consequences the schizophrenic drug laws in differing states and Federal law have. The most obvious being that the American penal population has swollen dramatically in the last twenty years. There are literally thousands of people banged up for many years for possession of small amounts of cannabis – even family members can be implicated and jailed if another family member is busted. Federal plea bargains encourage a system which is wide open to abuse by justice officials and criminals alike. Some states will jail someone for a cannabis offence and impose a sentence greater than the sentence for manslaughter or rape.

Minimum sentencing – something David Blunkett wants to impose more of in the UK – means that control is taken from the judiciary by politicians, which subverts the entire notion of an independent judiciary free of political pressure in a democratic society. As you may expect the sons and daughters of rich and influential members of society who are caught with dope tend to get a somewhat more lenient sentencing. One senator who campaigns vociferously for heavy sentences for cannabis use had his eldest son busted for not only smoking dope but selling it too. In the same state a man was jailed for a decade for this offence – the senator’s son got a suspended sentence, a fine (which daddy probably paid) and a trip to the substance abuse clinic. A garden supplies merchant and his wife were not so lucky. They did not smoke, grow or sell dope. Their crime? They sold farming equipment to a man who later used it to set up an indoor hydroponics farm for growing dope. They were charged with aiding and abetting. The same laws which allow this stop the families of victims of gun crime from suing the gun shop who illegally sold weapons. The hypocrisy is unbelievable. Meanwhile drug use amongst Americans continues to grow.