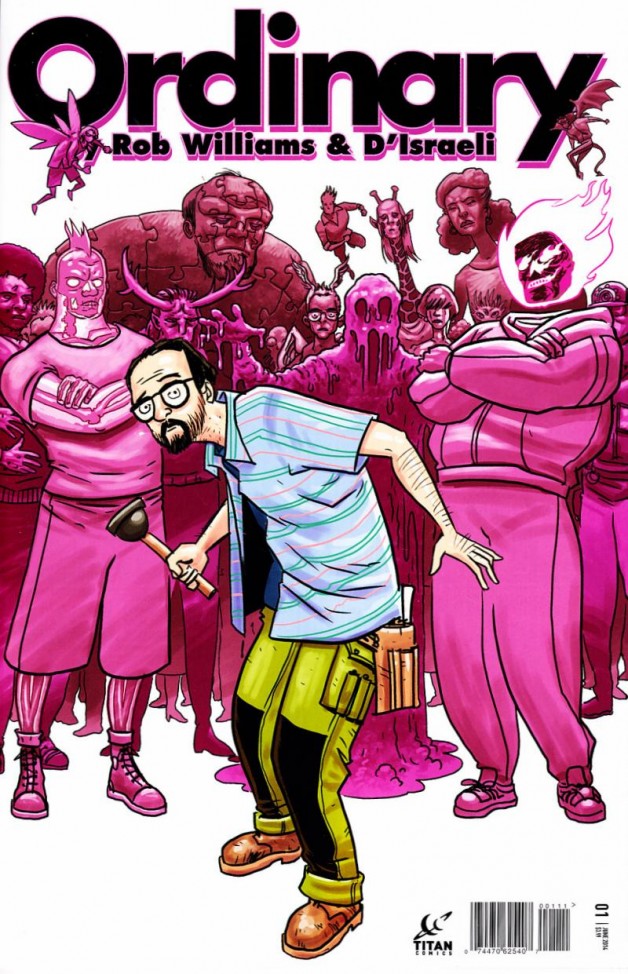 We’ve mentioned Rob Williams and D’Israeli’s Ordinary on here a couple of times in the last few months, just before it started its run in the creator-owned slot the good folks at the Judge Dredd Megazine have (a very good thing to include) and then again more recently when Richard had to be secured with duct tape to stop him falling off his chair laughing while reading it in the Megazine. Now for those who didn’t get to see it in the Megazine there is a new format from Titan collecting Ordinary in the US style comics format, the first issue being out this week. And that’s a good thing, because this is clever, satirical and often so funny the sanctity of your pants may be in jeopardy (go to the loo before reading. And wash your hands afterwards).

Meet Michael Fisher, real two-time loser, a plumber living in Queens, NYC. He’s rubbish in his real life (estranged partner and child, often absent at work) and just a pathetic even in his own dreams. In fact we open with him telling us about his dream of dating Scarlet Johansson and how even in his own dreamscape she turns him down and he just accepts it. Waking to find he has already slept in late for his first job, Michael is about to ind his day escalating on the bad to worse scale. Barely out the house, running to his job, late already and he runs into the enormous local thugs he owes money to. And then as they ‘chat’ there’s a loud noise and something seems to be happening to an airliner overhead. 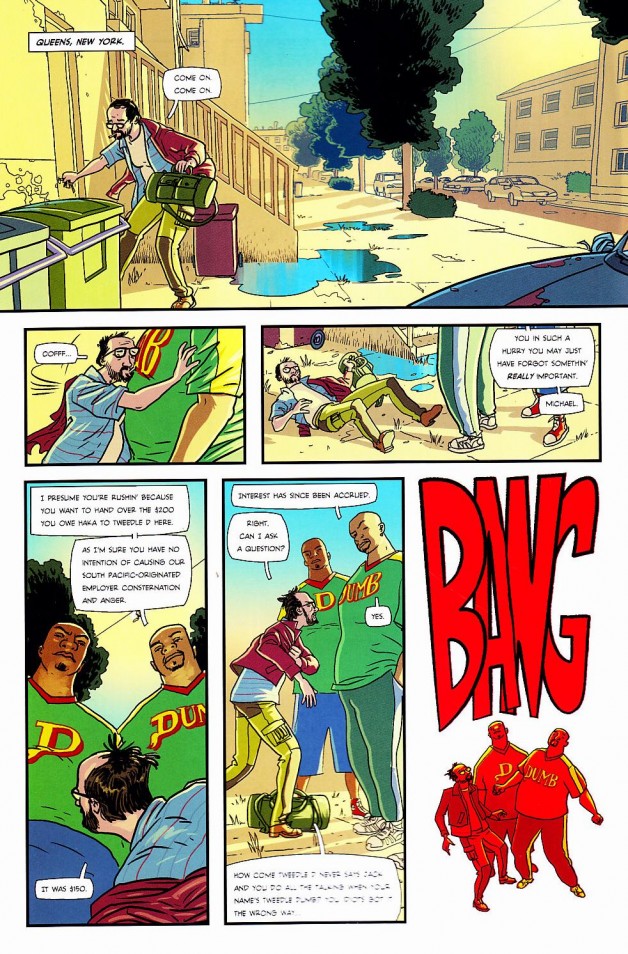 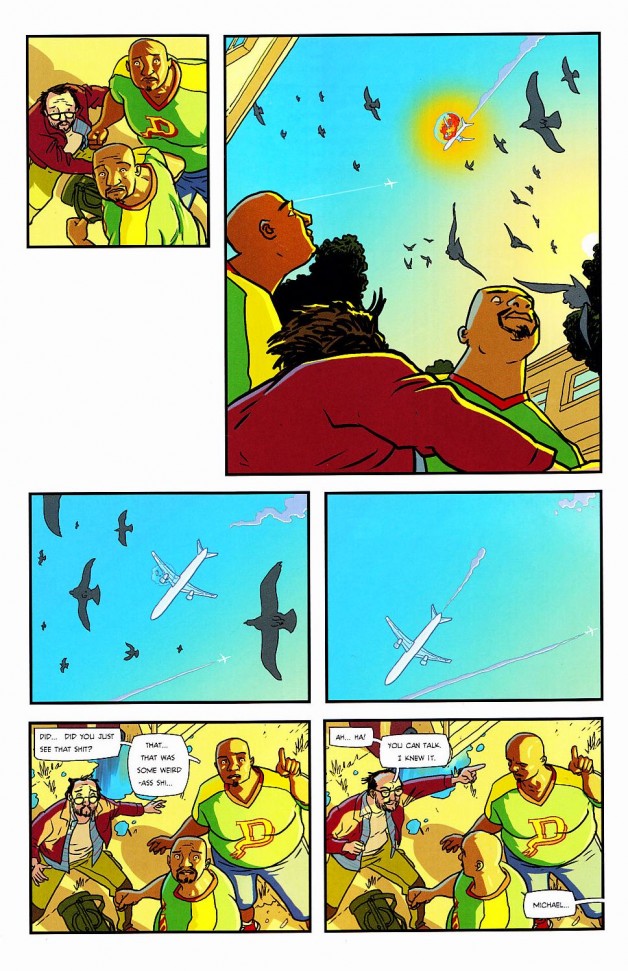 Getting free and finally reaching his first job of the day, his partner is unhappy because while waiting on Michael he has had to endure listening to the life story of the old granny whose apartment they are working in. Exasperated, Brian stomps off to begin the plumbing work. And then, as Michael watches, the elderly lady stands up and suddenly she is younger. Then even younger – marvelling she glances down her own cleavage “how high they are!” she cries, delighted. Except she keeps getting younger and, well, there’s only so far you can go if your body suddenly ages backwards… Rushing through to Brian working on the toilet plumbing to tell him what happened he finds his workmate is now – how to put it? – a little different. Okay, a lot different. In fact Brian is now a giant bear.

It’s more than Michael can take, and when he runs out into the street and finds the entire world seems to be going crazy he does the only sane thing he can and goes into a bar for a stiff drink and fumbles some cigarettes from his pocket. When the barman tells him there is no smoking allowed inside, Michael points out the world is apparently ending, and the barman tacitly agrees that lighting up inside is probably not high on the list of world problems, not on this day. This also sets up the next scene where Brian has followed Michael to the pub, still in his bear form and sits down, orders a pint then asks him matter of fact “I’m a bear, aren’t I?” When Michael tells him he looks like an American Black Bear Brian tells him not to be so racist. Then looking at Michael’s ciggy he decides to bum a smoke, leading to what has to be one of the best lines I have read in any book or comic all week:

“I would like to see a bear smoke a cigarette, I have to admit. Maybe that makes me a bad person.” 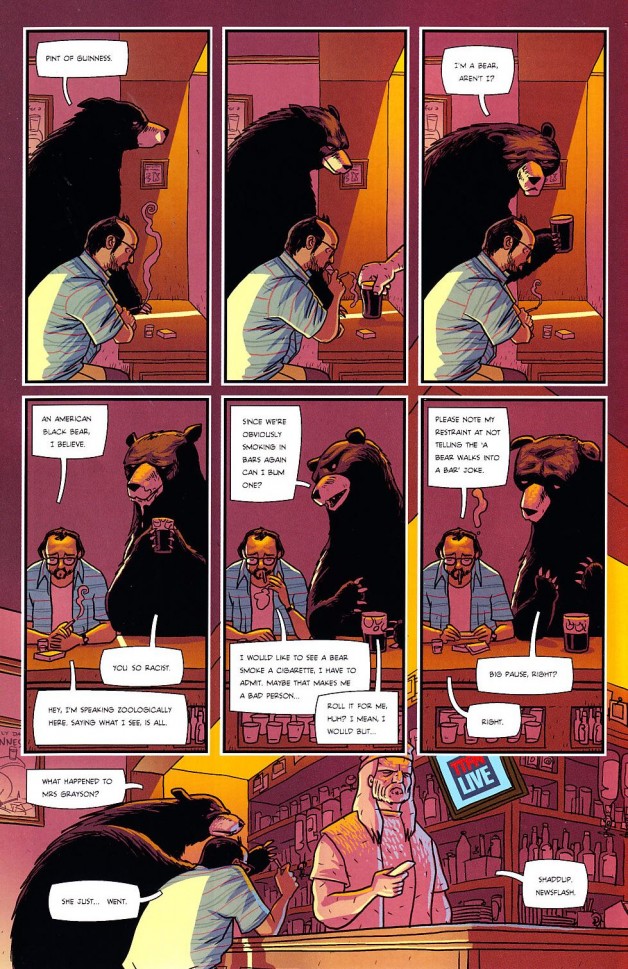 Then when the news comes onto the bar’s TV it becomes rapidly clear that this isn’t a local NYC problem, this is global – everyone, everywhere, child, adult, saint or sinner, has suddenly found themselves gifted with some form of superpower or ability. And predictably the world goes nuts – imagine the entire population suddenly able to do something they want to using vast powers, imagine the chaos. Imagine the petty arguments that can now develop into shattered buildings and bodycounts. Or the simple shock and horror at finding yourself changed into something totally different. Some powers are awesome in their potential, others are wonderfully ironic (imagine the usual two-faced Janus of a political leader suddenly finding that his power is manifesting comics-style thought bubbles by his head, showing everyone what he is really thinking while he says something else in his speech. Brilliant and one of those conceits that could really only work so perfectly in the comics medium). 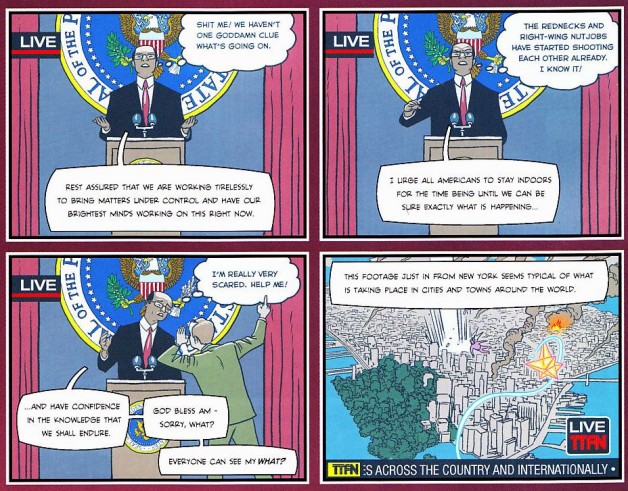 Michael though? Nope, only person not to develop superpowers. So in real life and in his dream life he is a loser, now even in the new tomorrow of superpowers, still a loser. Except of course that may make him vital to working out what happened to everyone…

It’s a cracking read – clever story and some great characterisation between Rob’s script and D’Israeli’ artwork. And on the latter it probably won’t surprise any regular 2000 AD readers to know that D’Israeli has been reworking his style yet again, something he does quite often, finding a new style, palette and approach for different story subjects (and it is this quality that I think is one reason why he is one of our best artists, he has an almost Talbot-like quality to change styles to suit different characters and stories). The nature of the story allows him to go from doing realistic city street scenes to the surreal, from a bear fixing the toilet to a dragon flying over New York, or a giant stomping over the city with the characteristic NYC “Hey, I’m walking here!” refrain. He’s obviously having fun with this.

And there is some lovely attention to detail – right back in that early scene I mentioned at the start, as Michael leaves home but runs int0 the local loan sharks? There’s a kid in the background playing with a toy plane, just a little background detail. I noticed his plane seemed a different colour in the next panel but put that down to a change in lighting perspective or simply a colouring mistake. But nope, much later on we’ll see this kid interact with Michael and realise that tiny background details was one of the first bits of foreshadowing of what was about to happen. It’s just a small details, wouldn’t change the story really if you never noticed, but to me it shows the care and attention D’Israeli puts into his art and the pair have for shaping their narrative.

Clever, inventive, bloody funny and it is creator-owned, so do yourself a favour and enjoy a good read and at the same time support a couple of our top-flight creators with their own work. Win-win situation. Roll on, issue #2.