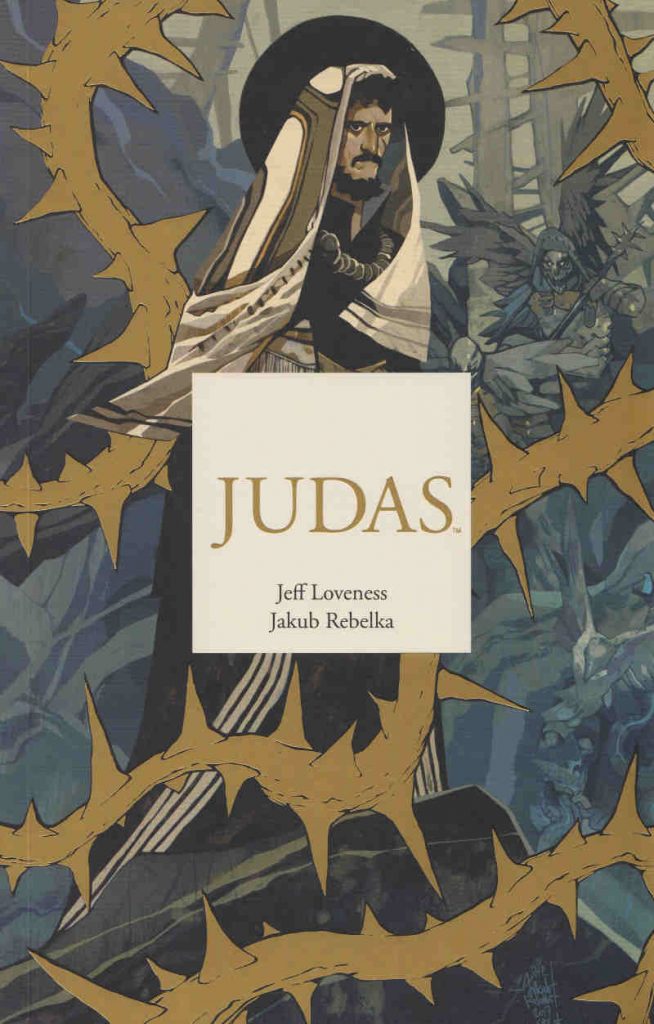 The most famous betrayal in history; two friends, inseparable then sundered in a violent, bloody scene. No, not friends, more, one a saviour, a messiah, even, the other his devout disciple turned betrayer. Judas Iscariot, condemned for all eternity for betraying Christ to the Romans. In the Inferno Dante condemns him to the ninth circle, the lowest level of Hell, a frozen wasteland where Lucifer is trapped in ice, eternally chewing on the body of Judas, perpetual torment, one betrayer to another.

Or so we’re often taught – certainly the interminably dull Bible studies I was forced to go to on a Sunday as a child only ever gave out the simple, black and white, good and bad version of Judas and Jesus, and discussion or even questions about the more complex issues of morality, predestination and free will were not encouraged there. Not so in fiction, of course, where this tale has been retold and re-examined from many different angles, from Amos Oz and Tosca Lee to, more recently, Maxwell Prince and John Amor’s fascinating Judas: the Last Days (reviewed here).

It’s not hard to see why, it is a tale rich with moral conflict and drama and questions which are hard to answer. Did Judas betray his friend because of an evil streak? Or because Christ had to be sacrificed, and that required him to be the one to hand his friend over to the authorities? And if the latter, did he betray Christ because he was asked by his friend to do it because it had to be done to facilitate that sacrifice (and don’t most of humanity’s gods just love a good sacrifice?), and he was the only one he could trust enough to do the deed, even though he knew he would be vilified forever by his actions? 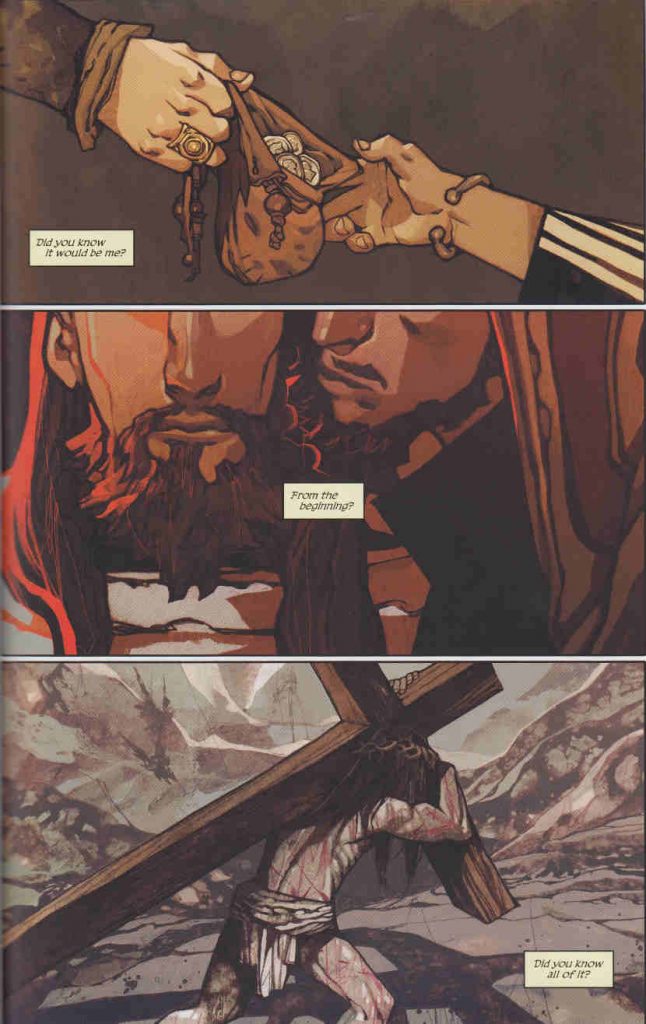 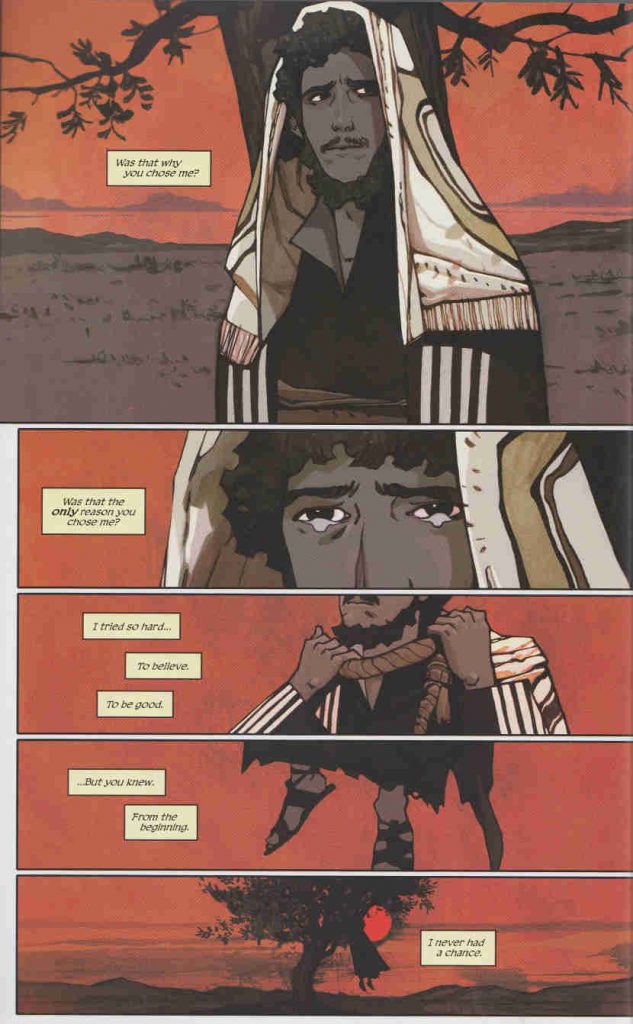 Or what if it was all God’s will, all pre-ordained that this was the role he was always destined to play? If so then how can he be held responsible for his decisions and actions, if he had only ever been a mere puppet on a string? Loveness and Rebelka’s Judas ponder these moral quandaries, and more, it delves into the personal relationship, humanises these two figures, especially Judas.

The initial set-up is handled with deft economy – the bag of silver coins, the kiss (such intimacy laced with betrayal), the scourging of Jesus. This is a well-known tale and they realise they don’t have to tell all of that, it is signified by a mere three panels on the opening page, then the fate of Judas on the next page, bereft, guilt-ridden, the tree, the rope, all handled in only five landscape-format panels, each one successively narrower, suggesting a rush to the end, the walls of his world collapsing in on him, the colours suffused a blood-red by the setting sun. Those two pages are a wonderful example of the way in which the comics medium can use visual shorthand, just a handful of images and panels, to convey so much meaning, the reader filling in the rest, it’s a splendid use of the medium.

But the final panel, hanging from that tree, silhouetted by the setting sun, a dangling black figure against the dying of the light of day, is not the end of Judas’ story. He opens his eyes again, but now he is in the most wretched place of all, the Pit. And another betrayer – perhaps the very first betrayer – the Fallen one who was once the Bringer of Light, Lucifer, is waiting on him. All his life there has been a second voice in his head, alongside the compelling voice of Jesus asking that he follow him, there was another, which sowed doubt like a farmer sows seed, and now Judas is face to face with him. 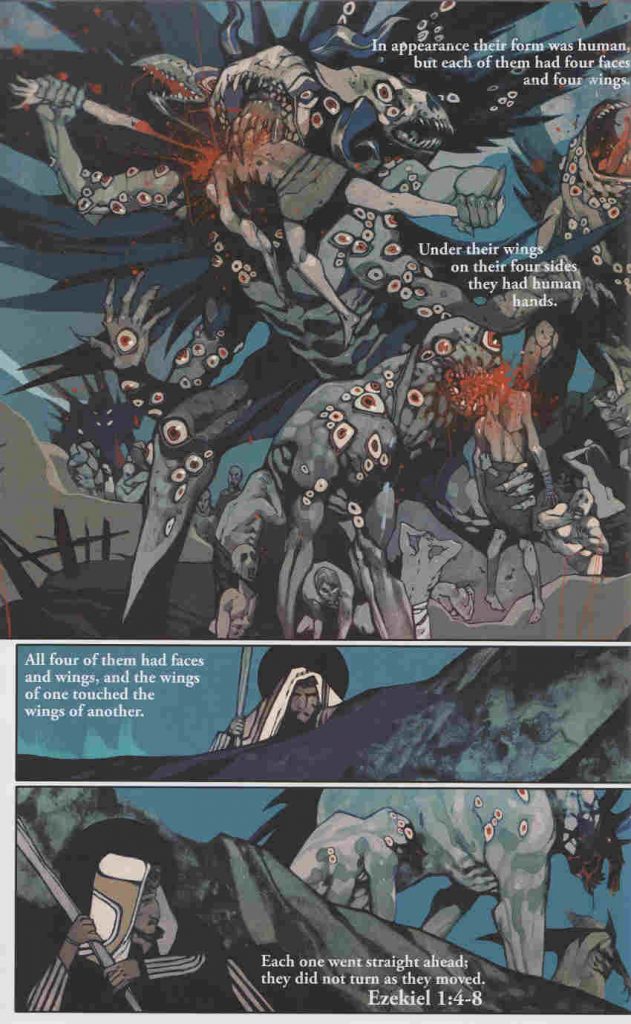 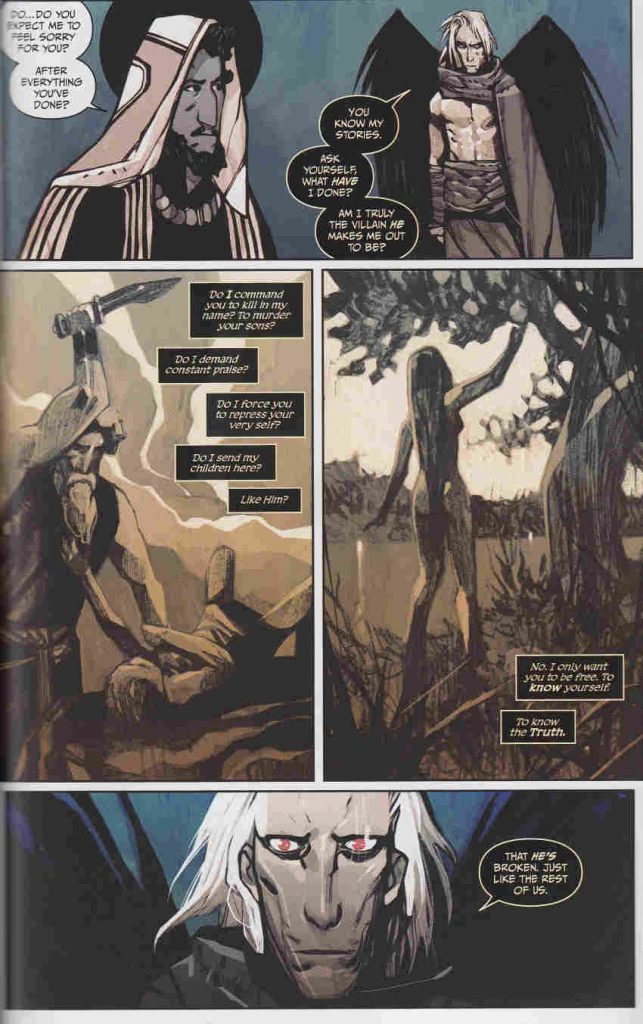 He is outraged, he rails against his fate, being so condemned to Hell for eternity, he blames Lucifer, but Lucifer talks to him in a persuasive tone. I didn’t put you here, your God did, your best friend, your Saviour. He compares the life of Judas to his own, how neither of them every really had a choice or chance, that these were the roles God always intended for them in His unfolding story. And if they had no choice then how fair is it that they suffer for those actions for all eternity? And the wider question of the world and humanity, what of them in this story, because, Lucifer explains, the story is broken. And Judas can see his point, he had already wondered when alive, if my friend can raise the dead then why do so many of us grieve for lost loved ones, if he can feed the poor then why do so many starve?

And then they are joined by Jesus, his mortal body dead, his spirit ascends not to Paradise but descends into Hell, weighed down by all the sins of the world he claimed to take upon himself. And here he has no power, he is just a dead man, and, Lucifer tells him, his father cannot hear him, or perhaps he can and simply does not care, it is just another part of this broken plan. And below the higher moral and theological questions, the personal: the damned Judas looks his friend in the face. “Did you know?” he asks. Was I always meant to play this role? How could you do that to someone who loved you? Why would you also then leave them in Hell, when you preach forgiveness, why not forgive him?

For me it is that personal aspect of Loveness and Rebelka’s take that is the heart of it – the moral questions are fascinating (and ultimately, I suspect not ones any of us can truly answer with certainty), but the personal aspect between these two friends turned enemies is not just the dramatic meat of the story, it is the emotional heart, and it is indeed very emotional as they face each other in Damnation. And I will not risk spoiling anything by saying anymore on that subject…

Rebelka’s art is perfectly suited to Loveness’s tale here – those aforementioned first two pages, the masterful economic but powerful few opening panels, the flashbacks to his mortal life as he becomes a disciple, often cast in warm, sepia and red tones, in contrast to the black and blue desolation of the Pit he finds himself in after death. There are some clever little detailed touches too – the old tradition, still practised in the likes of the Eastern Orthodox Church, of showing a saint’s halo like a golden disc behind their head is taken here, except the damned Judas has a black halo-disc. 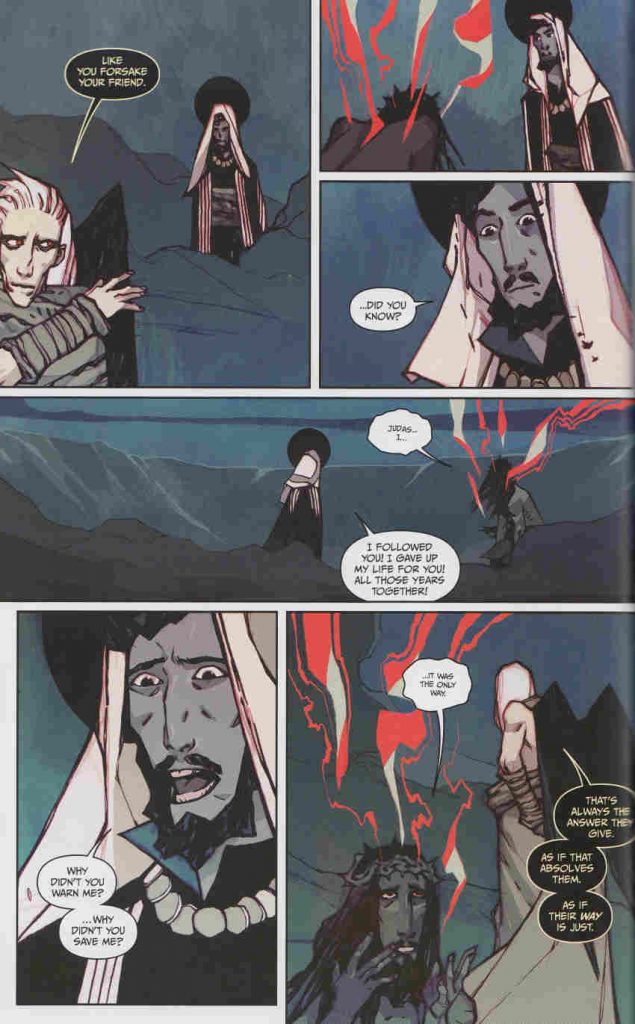 The darkness of it hints at his eternal damnation, and yet the fact he still has a sort of halo also possibly infers a spark of the divine exists in him, the spark that made him a disciple when he was alive, and that in turn hints at hope, and hope may be the one force that can fix the broken story Lucifer told him of so bitterly. Colin Bell’s lettering is perfect, the speech bubbles from Jesus in a red ink, hinting at the compelling power of his voice (shades of Preacher?), and this is also used to fine effect in Hell where the lettering changes mid-sentence from red to a regular black as his power fades in Hell and he is just another dead human soul.

This is a fascinating story, delving into deep moral and theological questions about our freedom of will versus the possibility of all of our supposed choices being pre-ordained, that we are just actors in a story laid down before we were born, and it that is the case then the Creator who decided that surely must be flawed… But at the deepest level it is a story about friendship, about betrayal, yes, but not just the obvious one of Judas (did Jesus, in effect, betray his friend, condemning him into this hateful role?), and ultimately about three of those most delicate and yet desperately-needed aspects of our lives, three qualities that are so closely related: forgiveness, hope and love.