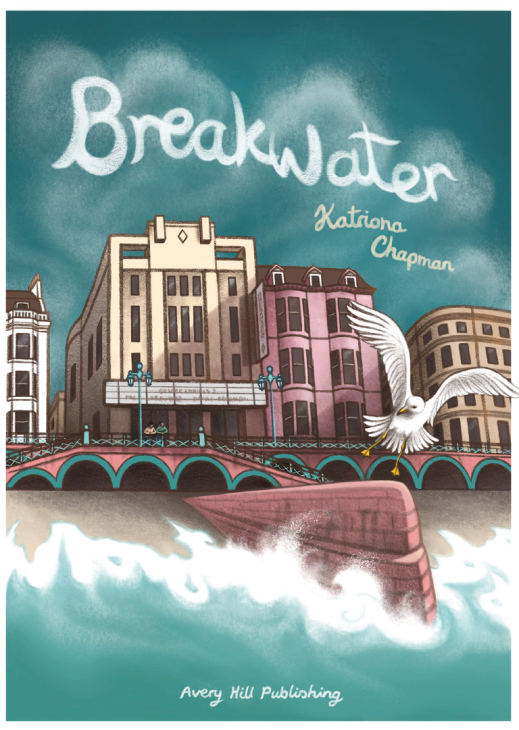 Katriona Chapman returns after the excellent Follow Me In, with Breakwater, and, oh boy, it’s just wonderful. The eponymous Breakwater is an old cinema by the seafront in Brighton; like many older cinemas in this era of big chain multiplexes (well, back when we could actually go to cinemas, pre-Covid days, sigh) it is a shadow of its former self, a once grand dame with Art Deco delights from a different era when cinemas weren’t just industrial buildings with seats and a screen, but an experience, designed to be dream palaces to transport you, not just with the film but the whole evening in the cinema.

Somehow, like a handful of others around the country, the Breakwater has managed to hold on in this modern environment, still with a small following, still independent, and crewed by a small group of staff who we are gradually introduced to as new arrival Dan, a twenty-something gay Asian man, is shown the ropes by veteran Chris, a forty-something single lady who is comfortable with her own company. Dan is affable and friendly, and soon fits in nicely with the others, even the teenaged lad that others can overlook (he left school with no qualifications, but Dan doesn’t judge him and just talks to him like a friend).

Dan hits it off even more with Chris, despite the fact she rarely mixes much outside of work and mostly spends her time by herself. He’s open and friendly, she’s warm, supportive, very empathic and caring (she spends time by herself but she’s not anti-social, it should be stressed, she just doesn’t go out much). As the two start to become friends outside of work at the cinema they share more time and thoughts with one another. 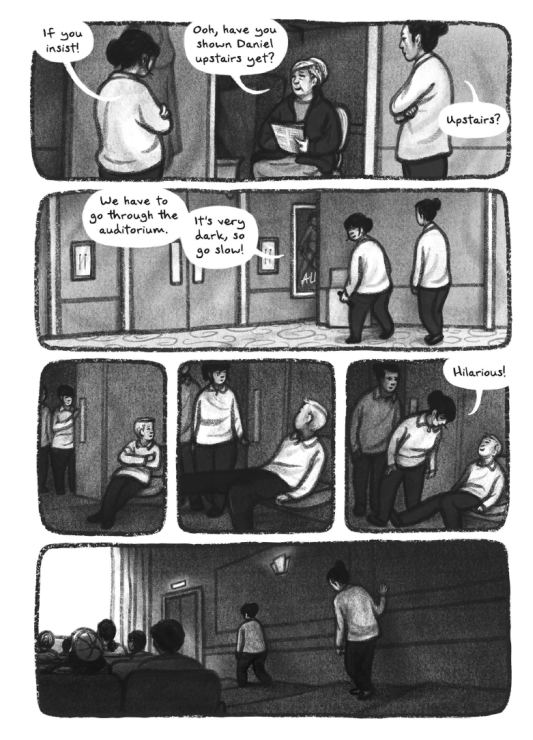 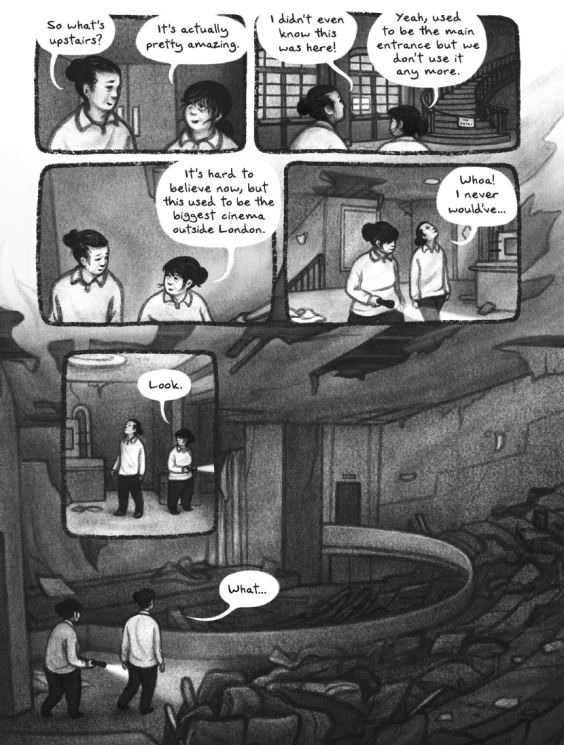 Dan gets Chris more out of her shell, getting her to go out for fun with him, to consider a long-abandoned dream of going back to finish her college course (like many she had to give up originally to take care of an ill parent), to stand up for herself a bit more. Chris draws the young man out, to share some of his dreams and his worries, from estranged parents to problems with an ex that he can’t quite get over but knows he should. It’s beautifully done, very, very natural feeling and wonderfully warm. But as they become more involved in one another’s lives Chris finds Dan has other, older problems, especially with his mental health, and it will lead to them both having to make difficult decisions.

That summary really, really doesn’t do justice to Breakwater though: this is a comic to savour, that takes its time to reveal the characters and their lives in a way the evokes very real, natural, believable people, all different in their own ways but clicking together at the Breakwater, in a way that many of us will find familiar from our own work experiences. The pacing and the progression is excellent, Chapman is not afraid to simply have scenes where several of the characters are just standing around in the cinema chatting, or conversely to have several scenes where there are no speech bubbles or dialogue boxes, the art carrying the story and atmosphere. 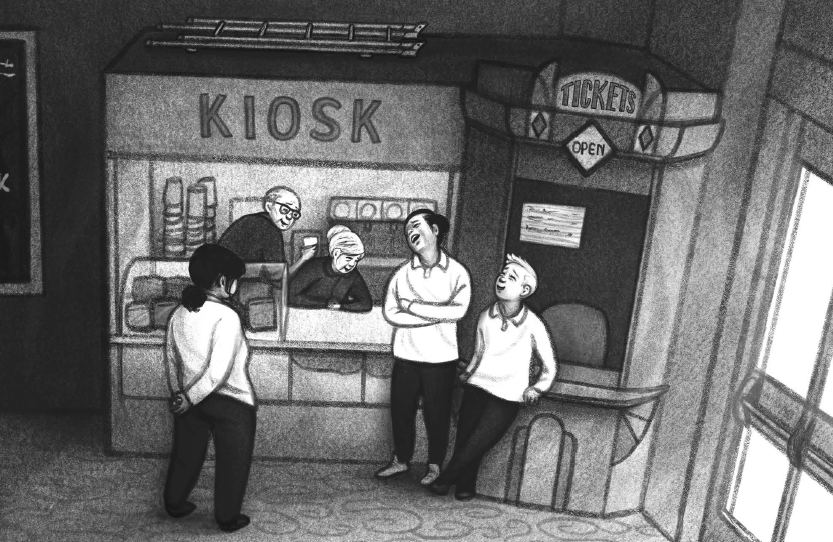 And what art: here Chapman has opted for a beautiful monochromatic style here, mostly smaller panels focusing on the characters, with the odd splash page that celebrates the faded glories of the old cinema (a now unused old auditorium above the modernised screens, a grand “ballroom” space – it reminded me of a bar I once worked in that was in a converted cinema and also had one whole auditorium above the main area, unseen by most, a ghost of the past). Those artistic asides to the faded grandeur hidden away inside the building also served partly as a way of making the cinema itself a sort of character, but also a nice visual metaphor for the lives of the characters, that we all have hidden secrets and stories within us, some shared with only a very few others.

The main body of the work is those smaller panels focusing on the characters, however, and those are an utter delight – Chapman’s art deftly draws (no pun intended) out her character’s inner lives and emotions, so that even in those wordless sequences I mentioned, the expressions and body language of her cast of characters so clearly expresses their thoughts and feelings. 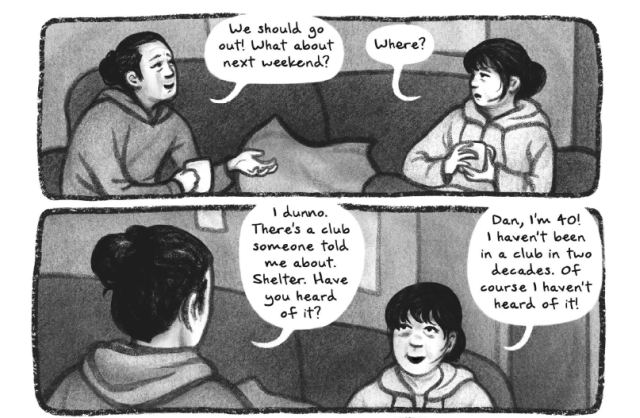 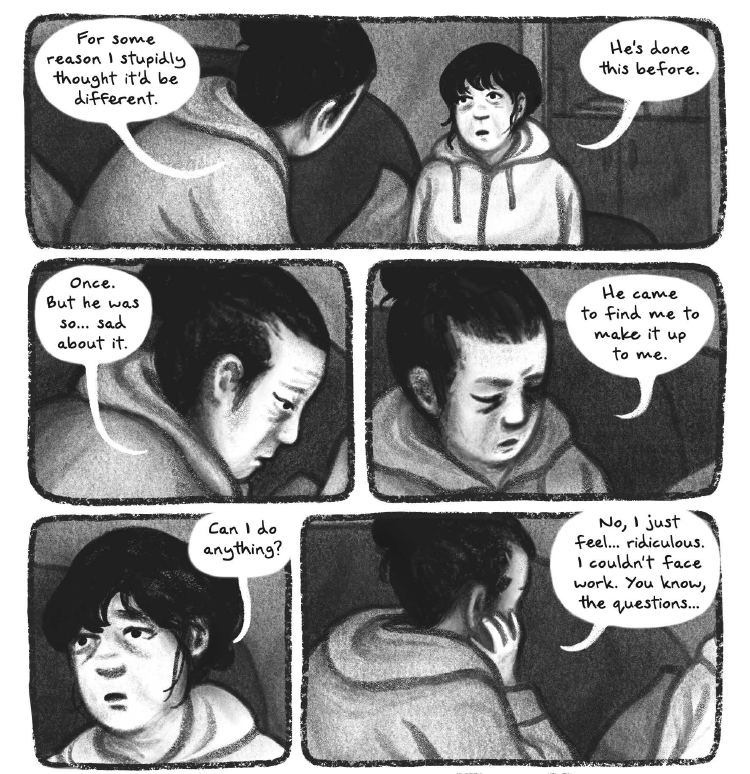 It’s a fabulous piece of comics artwork, beautifully accomplished, never showy, just the right amount of artistic flourish to delight the eyes without intruding into the narrative, it’s some of the finest work I have seen in ages for bringing out the emotional lives of the characters in a comics work, while the narrative itself, while often warm and touching, also doesn’t shy away from the impact mental health issues can have not just on the lives of those with the illness but those who care for them.

I can’t recommend Breakwater enough, this is a beautiful, warm, engaging, gorgeously-drawn and paced piece of Brit comics that many readers will find themselves empathising with.