This review was first posted on The Alien Online back in May of 2002. By coincidence it was the second pop-science book on the subject of historical automata I posted on there within a short space of time, the other being Tom Standage’s fascintaing book on the famous Mechanical Turk (reposted here). Wood’s book is more wide ranging though, going through a number of famous historical automatons across the centuries, right through to modern day scientists working in advanced robotics, along the way taking in the birth of modern cinema, stage magic and some of the figures who moved through both fields like George Melies, magician, showman, pioneer of early cinema and a displayer of automata, even taking in remarkable humans who some believed were really automata. 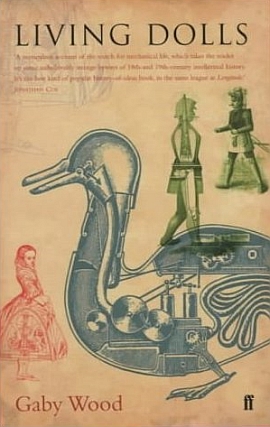 Typical – you wait ages for a book that deals with historical automatons and then two come along at once.

Anyone who has read the recently published the Mechanical Turk (see earlier review) by Tom Standage will be at least partially familiar with some of the subjects in this new book from Observer writer Gaby Wood. Understandably The Turk itself commands a fair chunk of the book – it is, after all, one of the most famous attempts to counterfeit life artificially. The question here is, does Living Dolls contain enough new material to make it worth reading if you have already perused The Turk? Personally I think the answer is a resounding ‘yes’.

Living Dolls eschews the in-depth concentration on a single strand of automata for a more general and wide-based historical overview. Wood certainly covers many of the same areas as Standage – Vaucanson’s mechanical duck, his magical flute player and of course The Turk – but she is preparing her grounds for a somewhat more anthropological approach. Her broader overview allows her to examine what it means to be human or machine and how the lines have been blurred by successive generations of mechanicians, scientists and illusionists (not all as different and occupation as you may suppose). Wood carries the reader through the wonderful devices of the 18th and 19th century with a journalist’s understanding for the human angle, affording us a more empathic approach to this fascinating subject than Standage, with a fine eye for wry amusement along the way (for instance the mechanical child who writes essays at his desk and occasionally scribbles “I think therefore I am, I do not think, do I therefore exist?”).

Wood includes in her definition of artificial life the creation of cinema in the 1890s and also the first phonographs, with excellent chapters on Edison and George Melies. It is hard to imagine for us now, but when Edison first created the phonograph he had inadvertently given away one of the defining characteristics of humans – speech and language – to a machine. Moreover, this machine could store a voice, playing it back long after the speaker has ceased to exist – this was indeed a marvel of the age and also deeply disturbing, especially when fitted inside Edison’s talking doll. Melies, a great stage illusionist who ran the Robert Houdin theatre (the magician and automaton maker who gave Harry Houdini his stage name), uses the early cinema to create new takes on human forms. One of the first to realise he could use the new medium for magical effects and tricks, Wood argues that Melies, by making what appear to be humans perform actions impossible in real life, had actually created a new type of simulacrum. In an age of virtual reality, this is certainly a subject to be considered and it is fascinating to see the precursors to our modern conundrum with technology and The Real back in the age of steam. 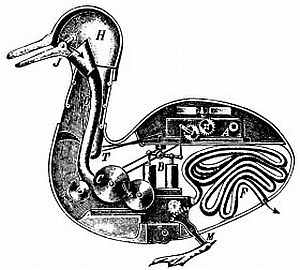 The final chapter deals less with the mechanical and more with difference. Wood brings us into the early twentieth century and the heyday of the travelling carnival and all-American freak show. We are introduced to many fascinating and richly colourful characters, notably the Schneiders, who appeared under the stage name of the Doll Family. This was a travelling act of a family of midgets, who unlike some small people have limbs that are in proportion, making them appear like either children or miniature versions of adults. Is this straying from the subject, fascinating as it is?

Wood, successfully in my opinion, argues that in a fine historical reversal the Doll Family were often perceived by curious audiences as simulacra. No real person could be this size and in proportion, so they must be clockwork dolls or automata of some sort. We have moved from the public gasping in admiration at mechanical devices counterfeiting life so well they believe a human agent must either be inside or controlling them to an era where they believe small humans to be unreal, mechanical concoctions. In an era of psychoanalysis this fits in perfectly with notions of the Uncanny and the all-too-human fear of the Other. The Dolls, especially Harry, appeared in many Hollywood films and were well loved. Tod Browning, who began working in these same carnivals went on to direct Lugosi in Dracula before casting Harry and other real life carnival performers in his astonishing film, Freaks. A fascinating mixture of mechanical (the moving image and recorded voice) and people very different from the ‘normal’ range of humanity – what is human? What is normal? How can we consider if a machine has life or thought if we are so prejudiced against other humans who look different? In a wonderful personal coda to this chapter Wood is examining archives in Florida, where the Dolls retired. After reading Harry’s obituary – he passed away in the 80s – she decides to drive past the address listed as his last home, a kind of pilgrimage. She is shocked to find the Doll name still on the mailbox and further surprised to find Elly – Tiny Doll – still in residence. It is a wonderfully personal and warm moment, a piece of the history she has researched, still here, no longer a chapter in a book but a breathing, feeling person.

The very last short chapter takes Wood to Japan to observe the latest in robotic technology. In another amusing twist she finds that Professor Takanishi has constructed an artificial flautist, completing a circle from the eighteenth century to the twenty-first. She asks him if this in tribute to Vaucanson’s famed eighteenth century mechanical flute player. Takanishi answers in the negative. In fact he is of the opinion that a mechanical flute player is so difficult to create that Vaucanson could not possibly have constructed one nearly two hundred years ago. I share Wood’s ironic amusement at this modern scientist’s lack of history in his own subject of research.

As with Standage’s Turk, Living Dolls is a book of wonders, from past to present. Little reminders that the mechanical miracles that are now commonplace in our modern world are not new, and debates over the status of humanity and intelligence and machines have been with us for a long time. I found The Turk to be a fascinating and absorbing book, but Living Dolls has perhaps a more human, warm and personal touch to the subject. Oh, why not spoil yourself and read the pair of them!? Then the next time you watch Data in Star Trek TNG debating if he is really “alive” you will be able to appreciate the rich history behind his Pinocchio-like dilemma.