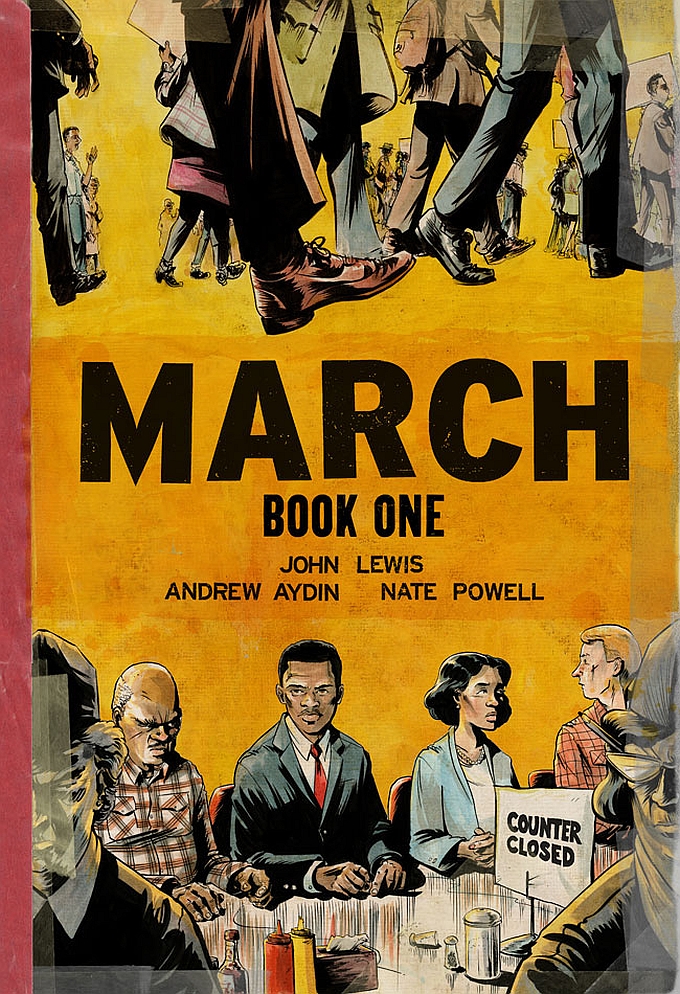 A cold January day in 2009, Washington DC, and a venerable politician goes about his morning routine before heading to his congressional office, preparing for inauguration day – a new president is about to be sworn in. Always an important day, but this particular occasion is more remarkable than most – Obama is about to take the oath of office, the first black president of the United States of America. The veteran old politician we see preparing for the day is congressman John Lewis, not just a man who has served his constituents for decades, but a veteran of the Civil Rights movement, a campaigner who stood there during the famous March on Washington in 1963, giving an important speech alongside Doctor Martin Luther King’s iconic “I have a dream” speech, surely one of the most moving and inspirational political speeches of the 20th century.

In a way I found this quite a daunting book to review – not, I hasten to add, because of anything wrong with the book. It’s beautifully put together, open, accessible. It was more a worry that anything I might say wouldn’t really do justice to the events recorded here, from eyewitness testimony of someone who was there, who stood up for rights for himself and others and had to struggle terribly for it against vile, brutal, racist thuggery that it is hard to credit was ever allowed to happen in a free and democratic society. And so I delayed it, kept rethinking it, rewriting it and eventually just had to decide to post it, warts and all. I’m not sure any review can do justice to someone’s memories of events like these that helped shape the world (and are still shaping it, Lewis is still fighting the good fight), but at the very least I can commend it as a book very worthy of your reading (and hopefully the sort of book you will want to pass around friends), and also one of those stand-out works which again emphasises how well the comics medium is suited to tackling any subject. 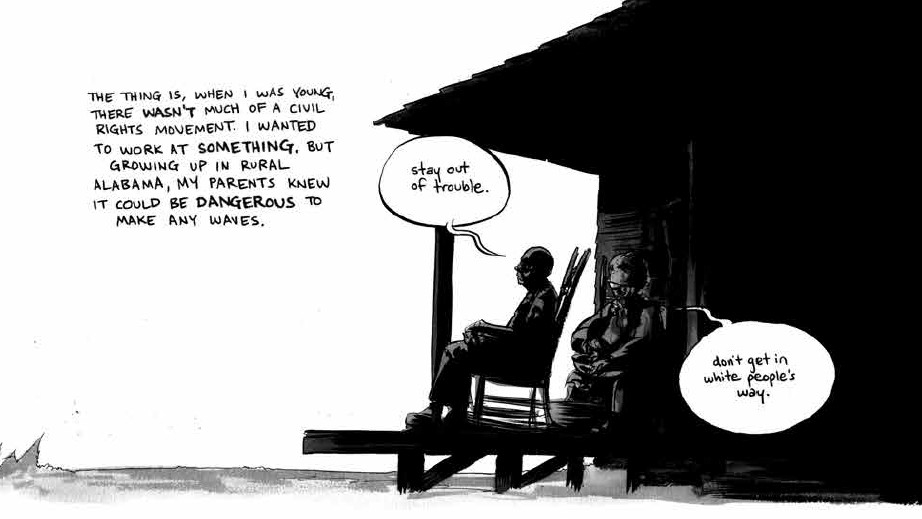 But, as I said this first book of John Lewis’ memories of the long march for Civil Rights is, quite deliberately I would think, made as open and inviting as possible to the reader, regardless of prior knowledge on the part of that reader – if you’ve read the history of the period or if much of it is new to you, this will still welcome you in gently. In a way it reminds me of Walter Scott’s approach to retelling Scottish history, the “Tales of a Grandfather”, and it did feel like that to me, as if a much-loved, warm-hearted older relative, a grandfather or favourite uncle, were telling a tale. And what a tale it is…

Through the framing device of a lady bringing in her young boys to meet Lewis and learn a little about the history of the struggle for equality we are taken back to his earliest days, as a young boy on the family farm in Alabama, his love of the animals, especially the chickens (although, as he points out wryly, there is a bit of a pitfall to becoming emotionally attached to your animals on a farm, since eventually they end up in the pot…), an early desire to become a preacher prompted by the gift of a Bible which he read and re-read and then school – especially school: “But school was important to me, and it was ultimately the reason I got involved in the Civil Rights movement.” In a simple but moving scene he also highlights the roles of educators, librarians and books in creating awareness, an enthusiastic school librarian telling the children “read everything.” 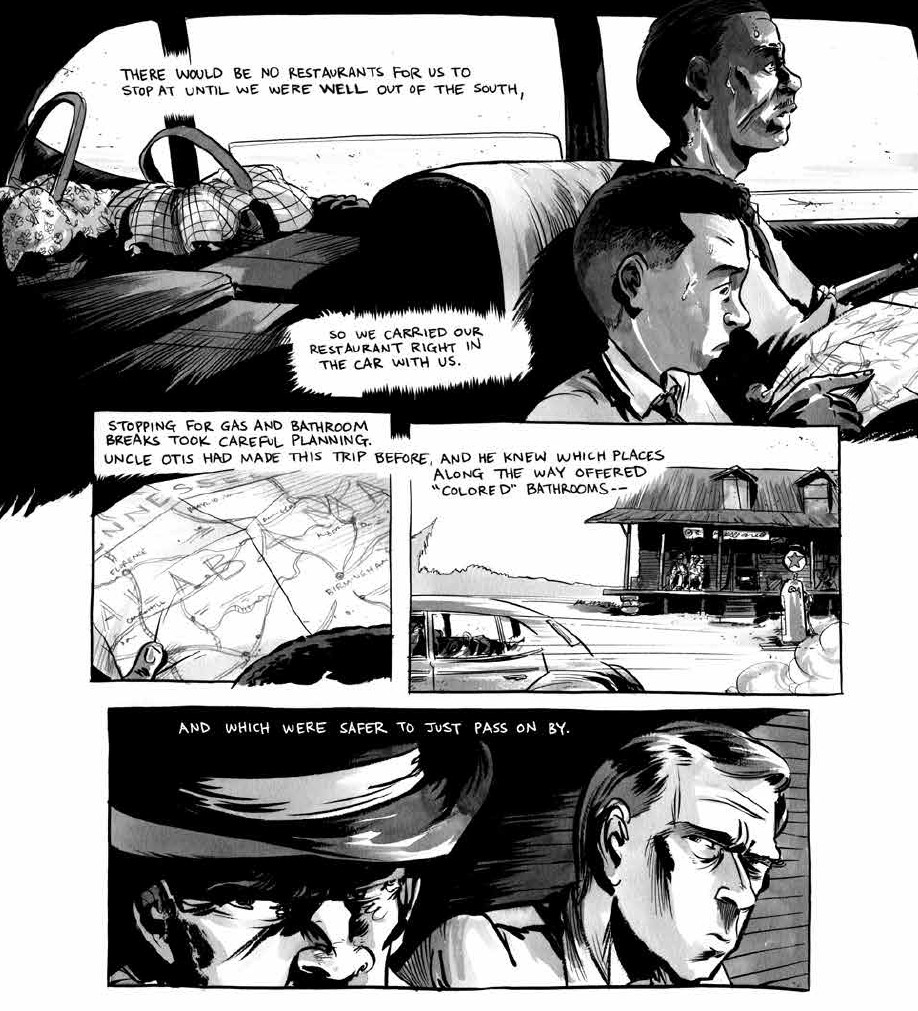 But how does a young lad in a rural county start to learn about the movement, much less get involved? Especially when much of the advice he is given is to keep his head down, not to attract the attention of “white folk”. A favourite uncle clearly sees something in the young boy, something he himself is probably not yet aware of, and he takes him on a road trip to expand his world a bit. This isn’t the usual road trip we’d think of today though, the freedom of the open road, seeing new places – as the book explains the trip took careful planning, such as carrying their own food because there are no roadside restaurants ‘coloured’ folk will be allowed in, some places they just can’t risk stopping in. It’s a simple part of the tale, but like many simple examples it illustrates a complex and distasteful truth, that a century after the end of the Civil War some citizens of a democratic country couldn’t fill up the tank or eat at a roadside diner in the Southern states simply because of the colour of their skin. And that was simply the accepted norm. Until some very brave people started to challenge it.

The early episodes where young Lewis is introduced to those creating the Civil Rights movement are fascinating and horrifying in equal measure – on the one hand to see a young man realising that he and others can make a difference, can work with others to make their society a better place, it is uplifting, inspiring, empowering, even; you feel, perhaps, just a little of that excitement he and his friends must have felt that they could make things better (and isn’t that something any of us in our societies should always aim to do?). And the determination to follow that model of Ghandi and remain resolutely non-violent is admirable in the extreme. Turning back on violence and hate with more violence and hate in response only fuels an endless cycle, trapping both parties. In some very upsetting, harrowing scenes we see activists (black and white) subjecting each other to harassment, derogatory remarks, pushing and more, to train themselves not to react with violence. I’m not sure I could bite my tongue or remain still in the face of that sort of provocation, and yet here are these young people disciplining themselves to do just that. To be better than those who want to ‘keep them in their place.’. It’s remarkable.

And it is at the same time horrifying in exposing the virulent face of unreasoning bigotry and pure hatred based on nothing more than seeing an entire group as ‘different’, and that difference justifying Jim Crow laws of discrimination, actually using institutions of state to repress and control black people, something you would have thought unthinkable in a free, democratic society, that it would do this against a section of it’s own citizens. And of course there is the raw hatred, indoctrinated into each generation to generation which justifies this control and repression, and which all too often leads to outright acts of sickening violence, with the perpetrators rarely held to account in any hall of justice, because those who are supposed to administer justice are as swollen with the same hatred – or indeed sometimes the acts of violence are perpetrated by those such a policemen who are supposed to ‘protect and serve’. 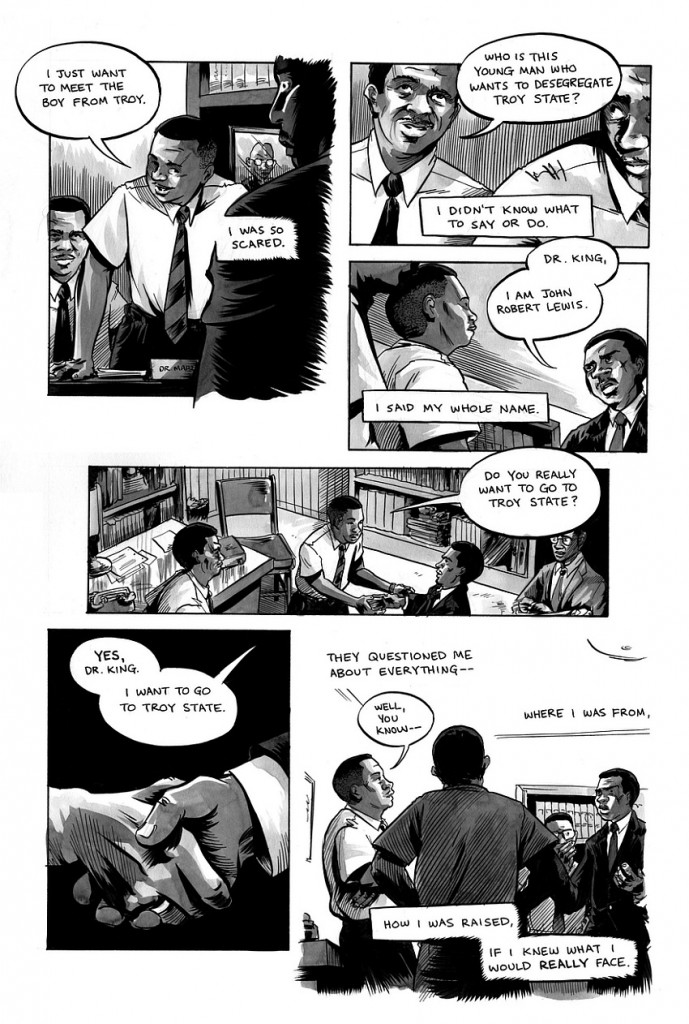 Throughout Nate Powell, whose work I have admired greatly since his powerful  and atmospherically drawn Swallow Me Whole, brings this to life with quiet, un-showy monochrome artwork, clearly striving not to let the art become more important than the story here, but also still ensuring these moments of memory are brought vividly to life. It’s obviously quite an emotional story, and Nate’s art captures this essence and enhances it, most notably, for me anyway, in the expressions, from the haunted, worried look as some of the black characters traverse a mostly white area to the hideous, contorted expressions of unreasoning hate as police lay into peaceful protestors, or the opposite, the gentle, loving expression of friends helping one another, that simple expression on a friend or loved one’s face that can be enough to get us back up the floor and make us keep going because we know they’re lending us their strength.

This is a slice of recent history, but it is also a personal tale, a beautiful reminder that all historical events were enacted by people. Actual people, not remote historical figures, real people with families, loved ones, hopes, dreams and fears and that to make that history they had to embrace the dreams and overcome the fears. And this is history that remains painfully relevant to modern society – just a few days ago a UK politicians tried to claim that recent extreme winter storms were God’s wrath because of Parliament allowing gay marriage; there is always someone, for whatever reason, prepared to justify treating others in an unfair manner because they are ‘different’, and March reminds us how hard the road to equality for all is and that we’re not at the end of that road yet, but perhaps we can see it, and we can all keep marching towards it. March made it into my top three graphic novels from 2013 in my Best of the Year.