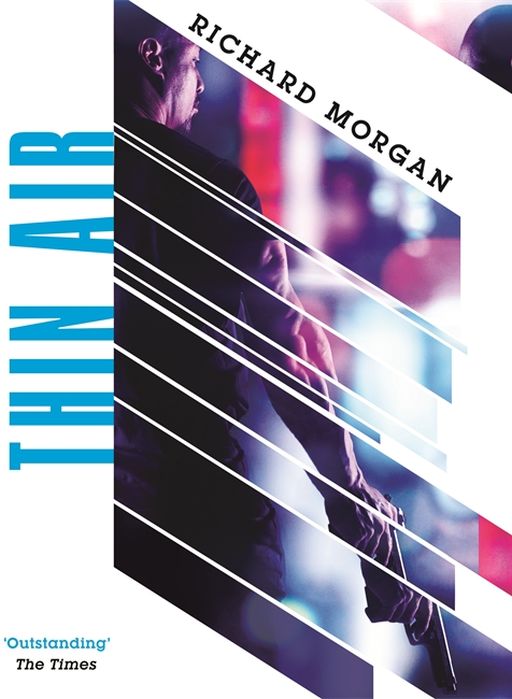 One of my favourite authors and all round good eggs Richard Morgan, gives a fascinating interview over on SF site IO9. If you’ve read some of Richard’s work before it won’t surprise you to know that he touches on sensitive subjects like morality, race, religion and other areas of contention (Richard has a gift for being able to make comments on heavyweight subjects while still delivering high octane action), as when he refers to the reception of his attack on the rampant free market in Market Forces:

“The book was really written as a critique not so much of the systems but of the mindset of this kind of boorish American businessman asshole machismo. I didn’t really think I was saying anything spectacularly unusual. I thought anybody who looked at would say, “Oh. Yeah, that’s right.” I ran into an awful lot of people for whom market forces are a kind of religious faith. I hate to caricature, but I do think American culture has a faith problem in the sense that there’s much more of a willingness on that side of the Atlantic to take things on faith, and just accept stuff.and believe in something wholeheartedly.

In Europe people just seem to be a lot more cynical about these things, whatever it may be, if it’s religion or politics or whatever. And yet it would appear there are a lot of people for whom free markets are tantamount to a kind of religious faith. And by writing the book I’d stomped on that as if I had written a viciously anti-Christian satire. That may be it, I don’t know. It may be that it was a book in which it’s hard to sympathize with everybody because the characters are all fairly unpleasant.”

With the kind permission of author Richard Morgan I’m posting the text of a rather eloquent letter he wrote to my former manager and is copying to Waterstone’s head office:

Dear sir,
I am writing with regard to the dismissal this week of one of your long-time employees, Joe Gordon. As an author who has had dealings with Joe through author events and signings at your branch, I was stunned to learn about the proceedings. I can honestly say that in my experience, Joe has always behaved with the utmost professionalism and enthusiasm, and a brief round of conversations with other authors has only reinforced this impression. He is a valuable member of staff of the sort that any bookstore should count itself fortunate to have.
I understand that this dismissal has been occasioned by comments on Joe’s blog column, which I read on a regular basis and thus am familiar with. While I don’t wish to interfere in company business, I have to say I think this bears comparison with taking disciplinary action based on private conversation overheard in a pub, and raises some disturbing issues of freedom of speech. Waterstones is, after all, a bookseller, whose stock in trade is the purveying of opinion, not all of it palatable to those concerned. You sell books which offer serious critique of the corporate environment and government, but do not expect to suffer punitive action from government or corporate quarters as a result. You sell books which criticise and satirise religious and political groups, but you do not expect to be firebombed by extremists as a result. Surely Joe has the right to let off steam in his free time without having to fear for his livelihood as a result. The action that has been taken so far bears more resemblance to the behaviour of an American fast food chain than a company who deal in intellectual freedoms and the concerns of a pluralist liberal society.
It seems to me that this whole matter has been an unfortunate over-reaction with no positive outcome for anyone concerned. Joe has lost a job he liked and did well, Waterstones the company in general and your branch in particular will attract rather negative publicity from the incident, and there will doubtless now be all the lengthy confrontational unpleasantness of an industrial tribunal. In short it leaves a sour taste in everyone’s mouth. Surely there has to be a more productive way to deal with the issue. I worked for many years in management myself, and I understand well the stresses and complexities of situations like this. But given the value that Joe offers as a participative member of Waterstones staff, and given the issues of free speech raised, I would hope that some compromise more in keeping with a civilised society and an intellectually involved company could be reached.
Though I shall hardcopy this letter to you and Waterstones head office next week, I would appreciate your response to this e-mail as soon as you have the opportunity.
Many thanks.
Yours faithfully

Another author, Edinburgh-based Charlie Stross has also posted a very considered opinion on his live journal.

In the regular My Sci-Fi column in the new SFX (where a public figure is asked about their genre favourites) comics star writer Mark Millar (Ultimates, Spider-Man etc) picked one of my (and the Alien Online’s) favourites, Richard Morgan. He said: “the best contemporary guy is Richard K Morgan. Reading Altered Carbon was how our dads must have felt when they picked up Carrie and discovered Stephen King.” Nice. Makes me even more eager for the new Kovacs novel.

On the note of disreputable SF authors I met up with Richard Morgan, author of the stunning Altered Carbon. Richard was signing copies of his Most Excellent new novel, Broken Angels, for the bookstore on Saturday(check the Alien for the double-header review Ariel and I recently wrote). He’d nicely timed his visit with my finishing time so that I could canter off with him and Matthew afterwards for a few chilled refreshments in Harvey’s in the New Town. Deep-chilled Hoegaarden, good company and some good craic – what more does anyone need? Plus another signed book for my collection (thanks, Richard). Matthew getting his colleague Juliet to bring their bookstore’s stock to the pub for a signing was a touch of class. Signings with authors are often fuelled by wine in-store and end in the pub afterwards, but it’s a tad unusual to do the signing there too. Perhaps I should suggest the Oxford Bar to Ian Rankin for the next author event we do with him?

Just finished reading Robert Reed’s new novel, Sister Alice. I first came across him when Tim Holman at Orbit sent me a copy of Marrow a couple of years ago. I went form looking at the cover and thinking it looked like an Iain M Banks wannabe to being utterly hooked within a few pages. So I have eagerly been waiting for this new novel, which Jessica at Orbit kindly sent to me as a loose-leaf manuscript (very easy to read in bed). Huge concept SF spanning millions of years of advanced human evolution – absorbing and gripping stuff. Check out the review on the Alien the do yourself a favour and read the book.