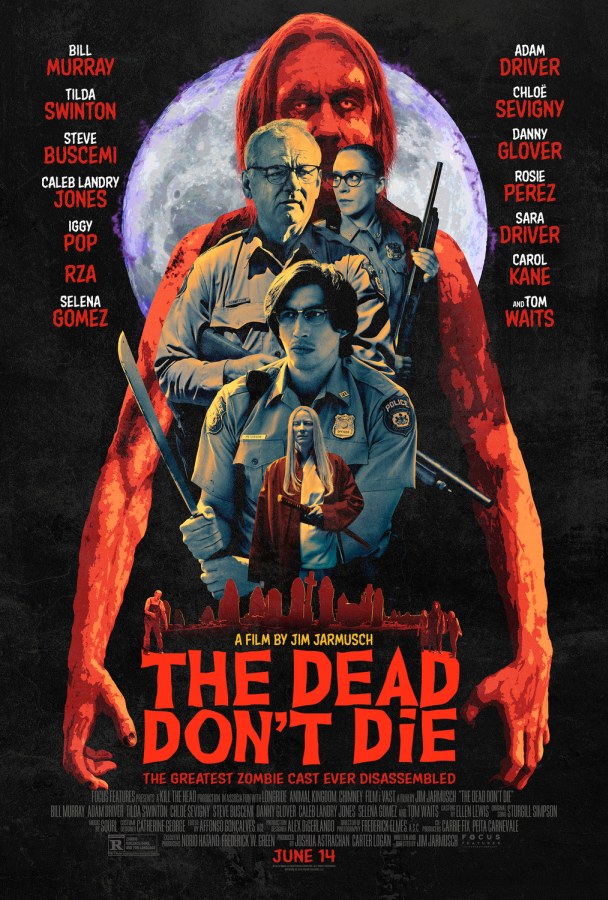 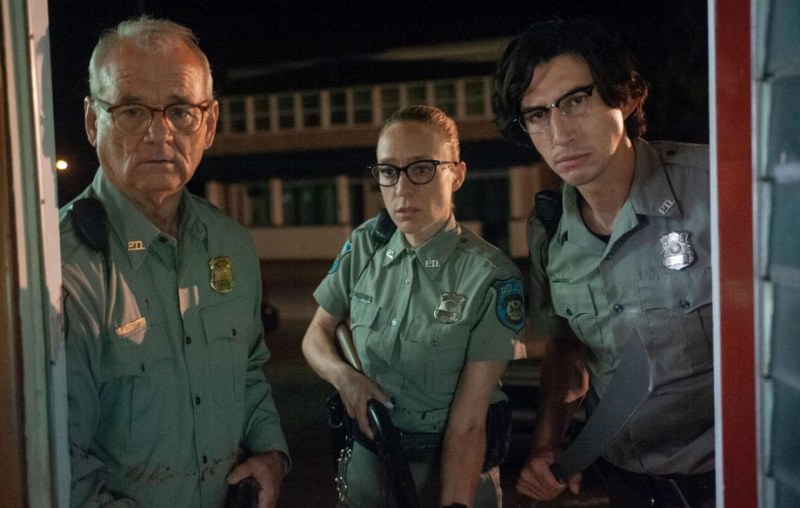 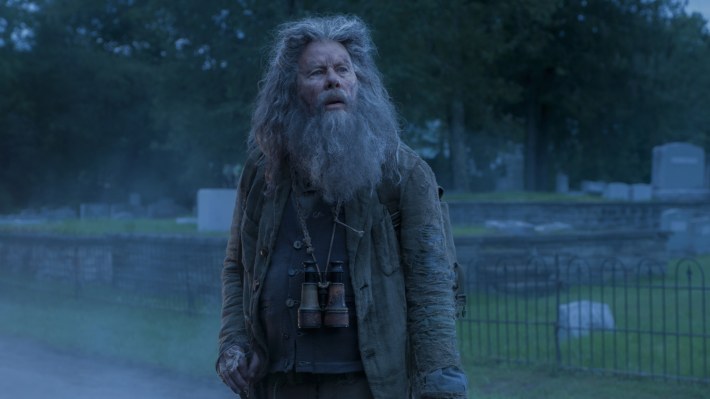 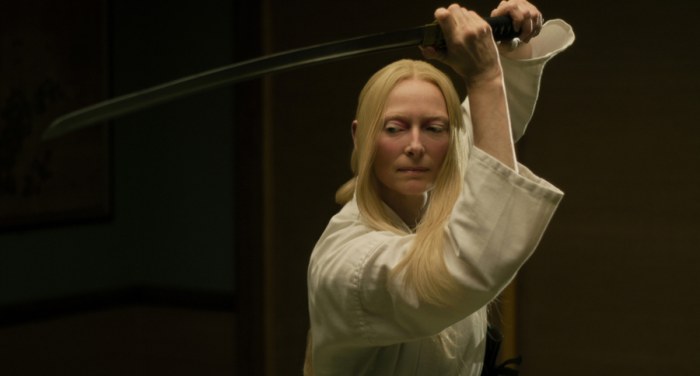 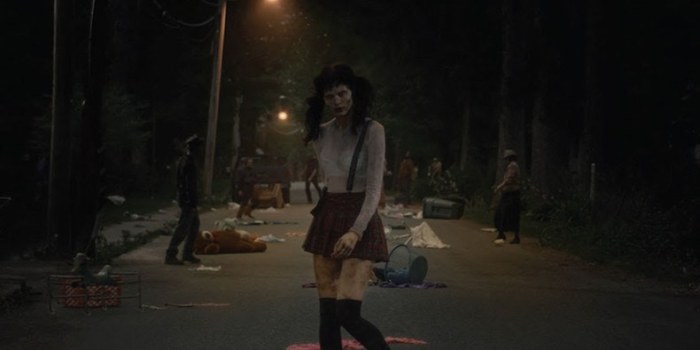 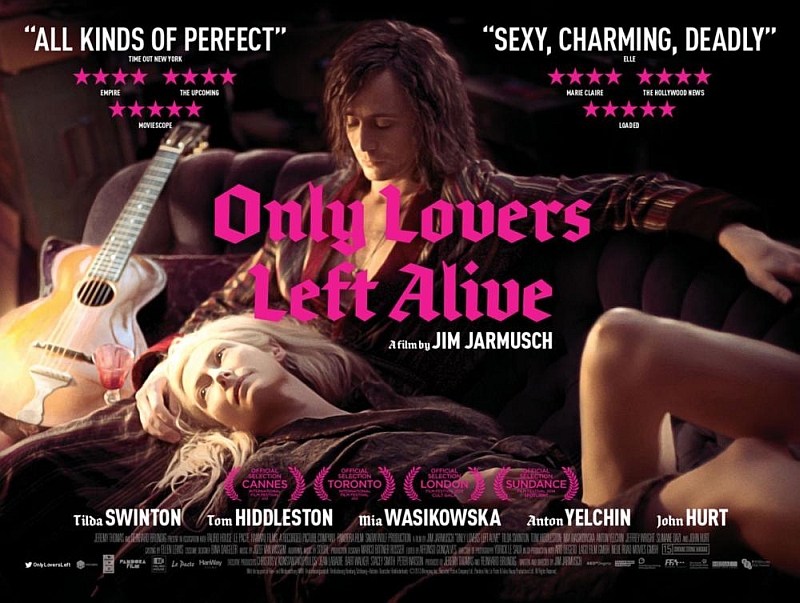 Adam (Hiddlestone) and Eve are vampires, husband and wife, lovers for centuries, but sometimes spending long periods apart, she currently living in Tangiers, walking the night-time streets of North Africa and paying visits on a very old friend (John Hurt), who happens to be the playwright Marlowe. Adam, a gifted musician, has a touch of the Byronic about him, now living in a decaying mansion on a deserted street of an abandoned neighbourhood of Detroit, surrounded by his instruments and his music, but slipping into a brooding melancholia, withdrawing from the world, refusing to even release any of the new music he’s created, hiding from fans who try to seek out his hiding place. His depression at the world after centuries, of the masses of humanity (who he refers to as “the zombies”) who seem oblivious to the wonders they could create and instead seem hell-bent on poisoning both themselves and their world. His ennui has driven him to consider a possible method of suicide before Eve, sensing his depression and need crosses the world to be with him (no small thing when you can only risk travelling on planes which fly and arrive during the hours of darkness). 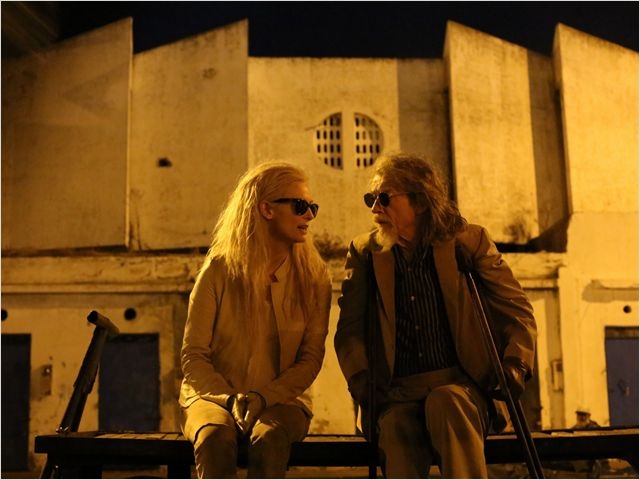 But this is a Jim Jarmusch film, and as such the narrative really isn’t the most important element; like the Coens movies Jarmusch creates films where a synopsis of plot (like the first paragraph here) only tell you a tiny bit about the film – as with the Coens these are films to be experienced, not just watched. There’re some beautifully crafted scenes and shots, the cinematography is, as usual for Jarmusch, beautiful, often luscious, some scenes posed almost like an old oil painting, beautifully composed, others employ unusual angles and tracking shots (such as slow, close up following the characters as they drink blood and sink backwards in pleasure, the camera moving with them), the nocturnal streets of Tangiers lit by streetlights are intoxicating, promising exotic wonder but also danger, even the abandoned streets of whole deserted neighbourhoods around Adam’s home in Detroit have a sad crumbling beauty as he drives through them in his vintage Jaguar XJS by night. 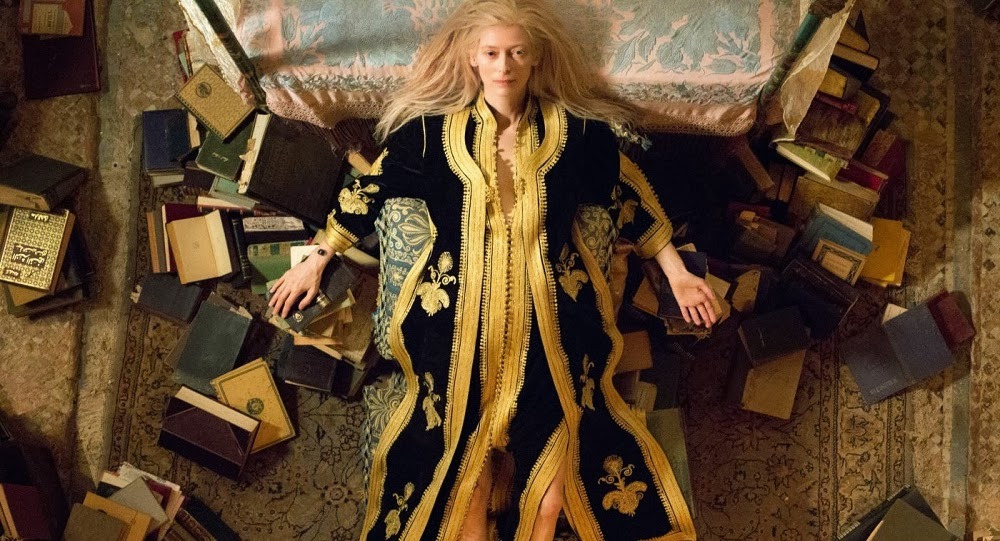 The pace is relaxed, languid even, frequently moving like a slow, hashish-inspired dream (again not unusual for Jarmusch of course). What’s the rush when you have centuries? Art and culture and the importance they play in making life (even long, immortal life) not just bearable but worthwhile play a major part – for Adam it’s his music, Marlowe, unsurprisingly writing (there’s some nice dark humour about his mutterings about Shakespeare), Eve seems to soak up everything around her in the most sensual manner, Swinton evincing almost childlike delight at all manner of things, from the howls of feral dogs in abandoned Detroit streets to Adam’s old instruments (she has an uncanny ability to date them just by their touch) or soaking in literature (a beautiful scene sees her devouring pages of books at rapid speed, hand tracing down the lines rapidly as her vampire senses take in a page in a couple of seconds, the fingers moving left to right, then on to Arabic and Chinese, reading the other way, the expression of pleasure on her face and in her eyes). Her home in Tangiers is littered with books everywhere (reminds me of my own home on that score…).

This could have been a gloomy, brooding piece – something that’s perhaps been done too often in vamp fiction in recent decades, the oh so weary immortal tired of it all – but actually it’s romantic and frequently touching. Adam and Eve’s centuries-long romance is rather lovely; she senses his depression and knows she needs him, as she explores his current home she notices a very early photograph of the pair of them from the 1860s, a wedding photo – their third wedding, she comments with a smile, and the scenes of them wrapped around each other slumbering through the daylight hours is very romantic (both preternaturally slender and pale – good use of Swinton’s ethereal presence and quality). There’s also a seam of gentle, playful humour – he shows her a vintage guitar he purchased, she runs her hands lovingly, slowly, over it – a 1905 LePaul, Eve tells him. Oh, she’s an old one, Adam comments. Darling, your dressing gown is a century older… And there’s a nice scene where Eve, to cheer up Adam, freezes some Type O blood he got from the hospital on sticks to eat like ice lollies. 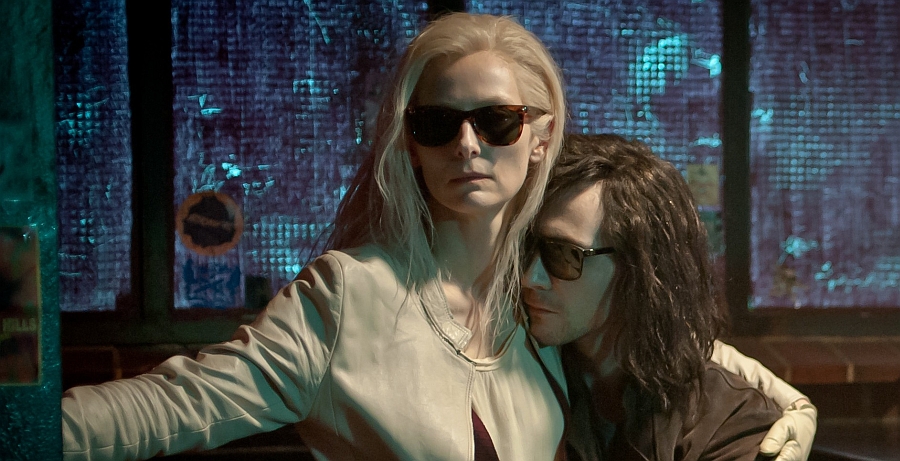 And for all their immortality it’s clear that really they are as vulnerable as mere mortals, rarely sinking their fangs into victims anymore, partly because unlike a few centuries ago you can’t just drain someone and throw the body away in the street or river, it will be investigated, partly because of that poisoning Adam so despises, the contamination also in the blood of many, which makes them ill. They rely on specialised medical sources who can provide pure blood for a price, anything which might reveal them to authorities or threaten their food source and turns out they’re as vulnerable as anyone else… It’s a lovely, soft, slow, languid, sensual piece – if you’re not a Jarmusch fan then it won’t convert you, but you’re missing out on a lovely film from one of our consistently interesting directors, not to mention some luscious visuals and an intriguing soundtrack that stays in your head long after the film finishes.