Batman: the Long Halloween (new edition due this autumn) 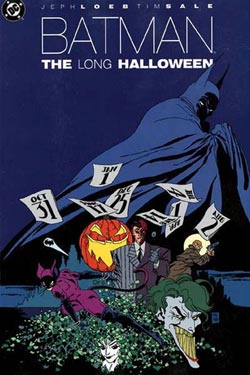 This old review was originally penned for The Alien Online many moons ago:

This is predominantly an ‘origin’ story, dealing with the fall of District Attorney, Harvey Dent, and his re-emergence as the hideously scarred (physically and psychologically) psychopath Two-Face. It is also the story of three men – Chief Jim Gordon, Harvey Dent, and the Batman – and the common cause, justice, which brings them together, and how that trust is ultimately shattered forever.

The Long Halloween combines several strands of plot into this main arc. There is the serial killer, ‘Holiday’, who strikes, as the name suggests, on vacations – Xmas, Valentine’s Day. There is the ongoing battle for supremacy between Gotham’s crime families. Carmine Falcone is the head of the largest crime family. His money can buy most police and courts, but not our triumvirate of heroes. The Catwoman becomes involved in his activities, although, as ever, it is hard to discern if she is a force for good or ill. Her alter ego, Selina Kyle is seeing the Batman’s daytime self, Bruce Wayne. Wayne, in his ‘normal’ capacity as a leading businessman, is involved in trying to block Falcone from using the bank, upon who’s board he sits, from opening a vast account to launder his mob money. Successions of Arkham Asylum’s finest criminal inmates are released upon Gotham and the Dark Knight. Poison Ivy uses her skills to infect Bruce Wayne, controlling him for Falcone, so he will stop blocking the bank’s move to allow in his money. This leads Gordon and Dent to suspect Wayne of being in league with the Mafia (they are unaware of his identity as Batman). Falcone has to deal with the death of several of his crew, including his son, supposedly by Holiday – or is it a disguised turf hit by other mobsters, or even his own sister, Carla? Scarecrow and Mad Hatter are loose on a spree, and the Joker simply can’t stand the thought of another outlandish psychopath in Gotham, stealing his thunder. He attempts to track Holiday, and, failing that, decides he can stop Holiday doing his job of terrorising Gotham by killing the whole population … With me so far? This is a big book! 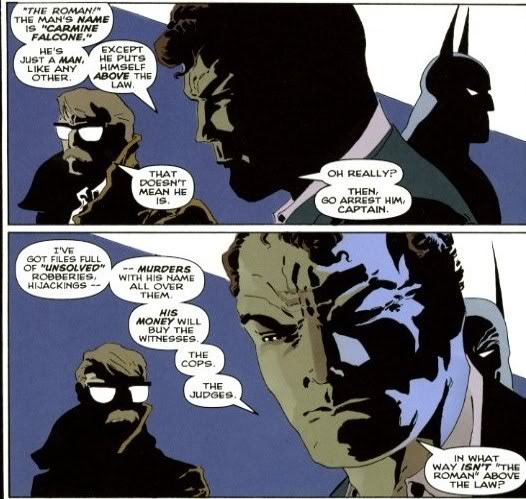 At the heart of this sprawling narrative, is the story of Dent, Batman and Gordon. All increasingly frustrated at the tide of crime, all seeking to stop it, all fighting for justice with their best intentions. All three trust each other. That trust will be broken when Dent crosses the line, being prepared to kill those who escape justice. He contrasts his approach with the Batman’s, who rejects this. He may be a vigilante, but he does not kill – that would be to lower himself to the level of those he has sworn to fight. Harvey Dent has succumbs to the Neitzchen nightmare – those who fight monsters must take care not to become monsters themselves. All three men have stared into Neitzche’s abyss, but Dent has allowed the abyss to stare into him. Events reach a climax when Dent is prosecuting a court case, trying to bring down the mob with an insider willing to talk. But this is a mere plot, and the witness attacks Dent in court, throwing a jar of acid in his face. Half of Dent’s head is burnt horribly, but the psychological scars are far deeper. Already pushed to breaking by his frustrated attempts to bring down big crime, his mind snaps. Escaping from hospital Dent now becomes the hideous villain, Two-Face. His journey from hero to demon is complete. Gordon and Batman are left to face the ongoing war on crime themselves. But Batman believes in the integrity of Jim Gordon.

This large Batman work may not be quite up there with The Dark Knight Returns (what is?), but it is still and extremely interesting read. The 20s style gangsters and molls give Gotham a suitable period style, and the artwork is rendered in a manner that is reminiscent of Frank Miller’s hard-boiled, neo-noir Sin City series. Loeb freely acknowledges the debt to Miller in his introduction. If readers are reminded of Miller’s excellent Batman – Year One, this is because he gave permission for Sale and Loeb to use some of this Batman ‘history’ for The Long Halloween. Dark, brooding – a Gothic whodunnit, and an excellent addition to any Batman reader’s shelves.