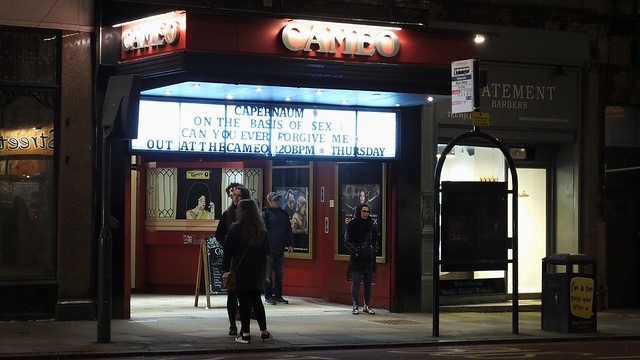 Walking home the other evening, taking some night shots as I did, this batch were around Tollcross, like the lovely old Cameo Cinema (seen above), with people waiting at the bus stop in front of it, standing under the marquee, or this cafe and neighbouring shop, still busy with people (had to take quick shot between the traffic flowing by this busy area): 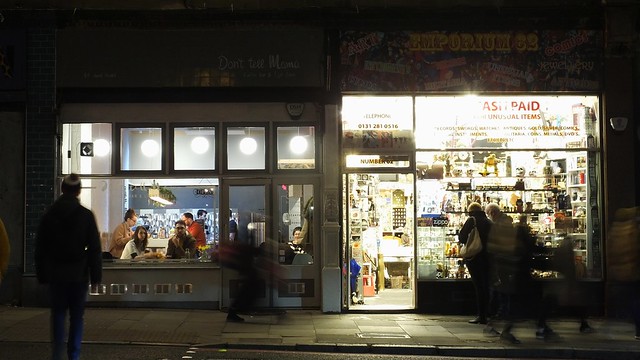 And here’s the distinctive red sandstone facade of the King’s Theatre at night, the green building on the lower right of the theatre is Bennett’s Bar, one of my favourite watering holes for many years (good real ales, has cool old tables decorated with OS maps, and it’s dog-friendly): 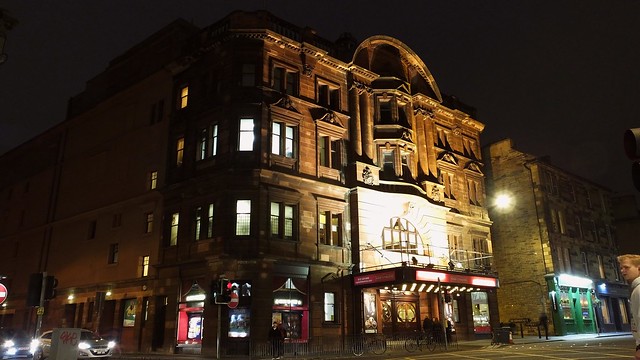 “And if the dam breaks open many years too soon

And if there is no room upon the hill

And if your head explodes with dark forebodings too

I’ll see you on the Dark Side Of The Moon” (Pink Floyd, Brain Damage)

I’m currently enjoying my annual smorgasbord of movies at the Edinburgh International Film Festival where among the movies from around the world is a low budget, independent British film by Duncan Jones (previously known as Zowie Bowie – yes, David’s wee boy, but commendably he’s deliberately not playing on that, he wants folks to come on the film’s merits). Moon is a most unusual beast – it’s a British low-budget, indy movie that isn’t a social realism piece set in a housing estate. Not that I have any problems with those (some bloody good films come out of that field), but it often seems in the UK film industry today we either make small budgeted social realism dramas or larger budgeted (still small by US standards though) historical costume dramas for the most part. A low budget Brit indy science fiction film? Unusual. And one which uses story and intelligence in lieu of dazzling effects and big explosions? Remarkable.

I was lucky enough to bag tickets to the UK premiere of Moon at the Film Fest here – both scheduled screenings sold out very quickly (although it has been added to next Sunday’s Best of the Fest, essentially a Second Chance Sunday for sold out flicks from the Festival, book now before they are gone). Right from the start I liked it. Sam Rockwell (Hitchhiker’s Guide to the Galaxy, Frost/Nixon) takes on a pretty tough role as he is mostly the only actor in the main scenes, apart from a few small spots (mostly video ‘letters’), a technician manning a mining station on the far side of the moon on a three year stretch, his only company a computer called Gerty, voiced by Kevin Spacey (and with a screen showing emoticons as a ‘face’).

As the film opens there’s a bit of a Dark Star vibe to the look and feel of it; like Dark Star, or the later Nostromo in Alien, this isn’t the gleaming future of mighty starships like Star Trek, this is space as workplace. Its grimy, its worn, its dirty in places. Rockwell’s Sam Bell at the start is a shaggy haired, straggly beared man talking to himself and his sickly looking plants or obsessively carving out his model of his small town home as he works alone on the Moon. The end of his three year tour of duty is approaching and Sam is counting the days until he can go home to his wife and little daughter. Rockwell does an admirable job of creating a convincing portrayal of a man who has been as isolated as it is about as possible for any human to be (even the live communication link has been lost due to solar flares, he can only receive and send recorded messages via a relay, no real time communication). His twitches and habits are believable of a man in that situation and the emotional desperation as he watches a video letter from his wife with their wee girl on her lap saying “daddy is an astronaut” is incredibly touching, you can feel his desire to be with his family coming out of the screen, but Rockwell wisely plays it subtly, restrained, not over the top or hystrionic, which enhances the emotional resonance, I thought.

There are little hints that the constant isolation and lack of even real time communications are taking their psychological toll on Sam. Watching a video from his wife it looks as if there was a sudden blip – did something change there or his strained mind just imagining things? Making a cuppa he turns around to see a young, teenage girl sitting in his chair, accidentally scalding himself in shock. He looks again and of course there is no-one there, how could there be? His sleep and dreams are equally disturbed. Returning to work he takes a lunar rover out onto the Moon’s surface and approaches one of the huge, automated mining machines, making its way across the surface on its tracks, spewing out chunks of regolith from the back as it moves. When an accident occurs and the rover crashes into the mining machine, Sam blacks out, only to wake up in the base’s medical bay with a concerned Gerty tending to him. How exactly did he return to the base, considering there was no-one else around to rescue him from his crashed rover? Confined to the base ‘for his own safety’ until he is recovered Sam suspects there is more going on than he’s been told and engineers a method to get outside and investigate. What he finds will shake him to the core – assuming its real and not the product of a mind collapsing under years of isolation syndrome.

And on the plot I shall say no more because to do otherwise would mean revealing potential spoilers, which I’d rather not do (I will also warn you that a BBC article on the film here, while interesting, does, in my opinion, blow a major plot point, which is damned careless, so be warned if you follow that link). On the production side, as I noted Rockwell does extremely well with a challenging role, the feeling of desperation and tension are palpable and the effects have a suitably dirty, grungy look to them. I had the impression that the exteriors were model shots – not because they were poor, I hasten to add, but they had that lovely physical feel that CGI sometimes just can’t manage (especially for dirtier, grittier looks such as the mining machines), reminding me (pleasantly) of the brilliant Moon models used for the likes of Space 1999. Director Jones and several of his crew were present at the screening and confirmed that they did indeed use physical models for those effects – in fact the same effects man who created the Nostromo worked on their models, which, as I said, looked perfect in the context of the film (and added to the physicality of the film in my opinion).

(director Duncan Jones talking to the audience in the Cameo Cinema after Moon’s UK premiere at the Edinburgh Film Festival on Saturday, larger version on my Flickr)

When asked about the budget (around £2.5 million – yes, really) Jones said that doing an SF flick for that money wasn’t too hard, but convincing the financiers that they could make this movie within that budget was much more difficult, they all assumed they would need a much bigger budget to achieve what they were planning (we should have asked for more money, quipped the producer). But through ingenuity they made it work – as their visual effects/designer guy pointed out its amazing the sets you can make with duct tape, paint and a bunch of Ikea flat pack furniture items (not that you can tell, it all looked very convincing). Jones told the packed (and very supportive) Edinburgh audience that they loved the SF genre and they wanted to veer away from effects-reliant ‘tentpole’ blockbusters and make ‘smart SF’. I’d say they’ve done so. Its a hugely admirable effort (especially for his first feature), Rockwell is convincing as the central character Sam, the look and feel of the film is suitably grimy, its quite a while before we can really tell if Sam is cracking up and hallucinating it all or if something sinister really is going on and from the look of it you’d never believe it was made for such a small budget.

Its British, its Indy and its bloody good science fiction. Moon gets its general release in the UK on the 17th of July (appropriately close to the fortieth anniversary of the Apollo lunar landing) and is well deserving of your attention and support. I’m guessing with that sort of budget they won’t have a mighty studio marketing machine, so if you like it, spread the word and give the guys some much deserved support for creating some bloody good Brit movie SF.

I’ve been seriously worried by some local news stories here in sunny Edinburgh recently about the wonderful Cameo cinema, which the current owners are considering selling parts of – notably the main auditorium. There have been stories about a proposed ‘superbar’ in Cameo 1’s graceful environs (like Edinburgh city centre really needs another bar) and counter stories that some films will still be projected there but with only a few seats.

The Cameo is an Edinburgh institution; a beautiful, friendly cinema showing a good mix of alternative, cult and world cinema with a terrific bar (and a licensed auditorium so you can take your drink in with you to the screening!) and a major component of the Edinburgh International Film Festival (Tarantino claims it as one of his favourite cinemas in the world and I seem to recall it is where a small, relatively unknown film called Reservoir Dogs was shown to packed Film Fest goers).

I’ve spent many a happy time in the Cameo; I’ve danced in the aisle at midnight showings of the Rocky Horror Show, laughed as fans turned up for a double-screening of surf movies Big Wednesday and Point Break in wetsuits, blond wigs and carrying ironing boards (the Cameo crew rewarded them with lots of free popcorn). I’ve watched big international hits like Pulp Fiction there and tiny independents like Primer; I’ve watched films in lord knows how many languages there and chatted with first-time directors in the lovely bar after Film Fest screenings. With good student discounts and the club card the Cameo, along with the nearby Filmhouse, was one of my second homes during my college days.

It is one of the most comfortable and welcoming cinemas I’ve ever been into and Cameo 1, the main screen, is gorgeous and a venue beloved not only by our city’s many film fans but by the thousands who come for the Festival too, so this is not just a local story. I really can’t undesrstand why the current owners are being so damned stupid. My chum Claudia pointed me to a site set up to campaign for the Cameo – it has the full story and also a petition you can sign to help save this wonderful emporium of the moving image. For those of you who have loved the Cameo I’d urge you to visit the site and sign the petition – December 9th is the deadline for objections, so act now.