My lovely mum was all set to retire at the ripe age of 60 next month from her part time work but unfortunately it has been brought forward by circumstances: she works in a bakery and on her way to help a colleague she slipped on a bit of foodstuff and had a nasty tumble, injuring her arm quite badly. She’s pulled muscles rather nastily but after a couple of days of increasing pain she finally went to the casualty department at hospital and it turns out she chipped the bone and caused more damage than she thought. So now she is in a lot of pain and bound up with a special sling, which is making life very difficult – she isn’t sleeping right because of the pain (and being worried about rolling over onto the bad arm in her sleep – major owww!) and simple things like fixing her hair are very hard to do with one hand, so she isn’t going out much because she won’t go out unless she looks presentable (unlike her son who is a scruff, looks, as she puts it “like something that fell of a flitting” – or ‘Bohemian’ as I would have it). And since she will be bound up like this for several weeks it will go past her 60th birthday in December when she was to retire, so she missed that.

And she isn’t trying to claim for compensation. If it was a small family business I could understand her not wanting to claim in case it ruined their business, but it is a large group of national bakeries; it wasn’t a malicious thing, but she slipped and injured herself on something that shouldn’t have been there and is in a lot of pain because of it, so that is their responsibility (yes, Greggs, the “family baker”, I am talking about you and the crap way you treated a long-serving employee). I’m damned annoyed she won’t claim and I’m going to keep pressing her on it. Does seem very funny to think on my mum as retired though (although 60 isn’t old these days, is it? Not unless you are 16) – she still has a creamy complexion and her hair is still red, the benefits of a Celtic heritage. I’ve never been someone obsessed with money (which is just as well as I’ve never really earned much!); mostly I’m happy to make enough to be comfortable and doing a job you like is worth a lot more.

One of the few reasons I would like to be wealthier is to be able to say to both my folks, here’s all your outstanding stuff paid off, now bugger off on a big, long holiday and enjoy yourselves while you’re still fit and young enough. Alas I can just about pay my own mortgage, so that isn’t going to happen, but it would be nice, wouldn’t it? I’d love to be able to take care of them the way they have taken care of me over the years. One thing I’ve never taken for granted is my parents; so many kids in our world grow up with parents who don’t care or no parents at all. Not me, I got the luckiest draw you can get, parents who love you and will do anything for you and a big family of uncles, aunts and cousins into the bargain. That’s worth more than money and I know how damned lucky it makes me; anything and everything I ever do in life is built on that foundation. I wish every kid had that, then the world would be a much better place.

I had one of those really great Sundays this weekend. Melanie and I met up at the fabulous little pastry shop/gallery near my flat I mentioned back in December, the Old Bakehouse. Scrumptious cakes and a wee art gallery, what a brilliant combination. Choux pastry filled with fresh cream and dusted all over (actually covered) with chocolate flakes…. Mmmmmm, choux pastry….. Lovely little independent gallery in the basement. Down the spiral staircase where you can slurp your coffee and harden your arteries with fresh cream in among the artwork. Terrific. The nice gentleman even gave us a goody bag of some fresh pizza slices since he was about to close and didn’t want to waste them. Result.

Skipped off through the nearby subway (newly decorated with cool stencils and art which I must photograph sometime – sure Olly would like it)to the cinema afterwards, full of coffee and cake and arrived in time to watch an amazing film filled with the cream (oh that word just keeps coming up today, doesn’t it?) of British thespian-hood: Sir Ian McKellen, Jim Broadbent, Tom Baker, Joanna Lumley…

Yep, Mel and I went off to enjoy The Magic Roundabout! And it totally and utterly rocked! It was far too good for the kids who were there and I suspect they were left bemused as to why we were so amused by Dylan the hippy rabbit’s references to grass and hot rocks. And Tom Baker as the Zebedee’s evil nemesis Zeebad was perfect, but then Tom is madder than a hedgehog on a motorbike (but we love him for it). Totally groovy – the only fault was they didn’t play the classic Magic Roundabout music! Why ever not??? I was all ready to dance around in a little circle to it. Oh, wait a minute, perhaps that’s why they didn’t play it… 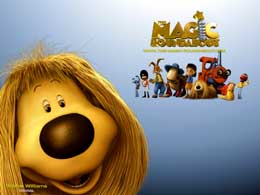 Continuing our perfect timing we skipped back here through the rather chilly evening and caught the opening two episodes of Joey. Mel and I used to watch Friends together so this worked perfectly – comedy is always funnier when you share it with chums. And of course it is even better with chums with wine and popcorn. I thought Joey was better than I expected although his nephew/room mate does seem to be an amalgam of Chandler’s smart but hopeless with girls character and Monica’s neuroses, but we’ll have to see how it goes. And yes, I’m sure some of you will slag me off for liking Friends, but what the smeg…