I’m a child of the Space Age, an infant when humans first walked on a surface that was not of our world for the first time in all of the history of our species. While school chums had posters of football players on their bedroom walls, my walls sported posters of Neil Armstrong and Yuri Gagarin. I remember being lucky enough to have some fabulous toys to play with as a small child, but my earliest memories of any plaything is my little silver spacesuit and helmet. Wearing my toy spacesuit and sitting in a cardboard box for my spaceship with my imagination taking me to infinity and beyond.

I wanted to be an astronaut. 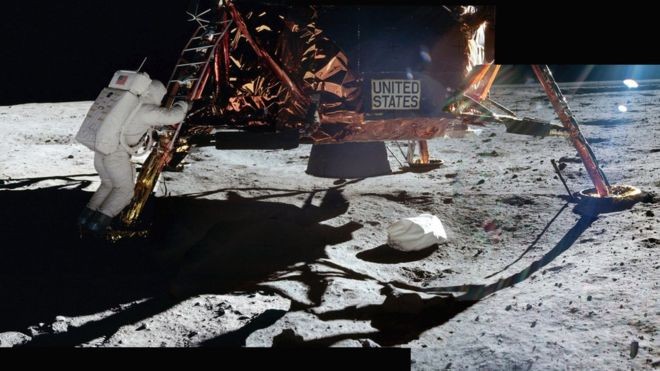 When I was just an infant human beings, for the first time in the history of our entire homo sapiens species walked on the surface of another world. Since hunter-gatherer times, long before the dawn of civilisation, human beings had dreamed of the moon, worshipped her as a goddess, called on her power over human affairs, and dreamed of what it was like to be there. But for tens of thousands of years nobody could be there – you could be an emperor or a peasant, it didn’t matter, the moon was forever there in the sky but out of reach. A pleace dreams are made of.

But when I was a child, human beings made the most extraordinary voyage in the history of humanity. We walked across ancient Africa, we spread out across Europe, Asia, the Americas and colonised the world. Much later we sailed across the vast oceans of our blue world, from those astonishing Polynesian travellers on reed boats sailing the vast oceans of the Pacific (some of the greatest natural navigators of all time) to the early voyages of Magellan and Admiral Zheng He to the great Age of Exploration and James Cook. 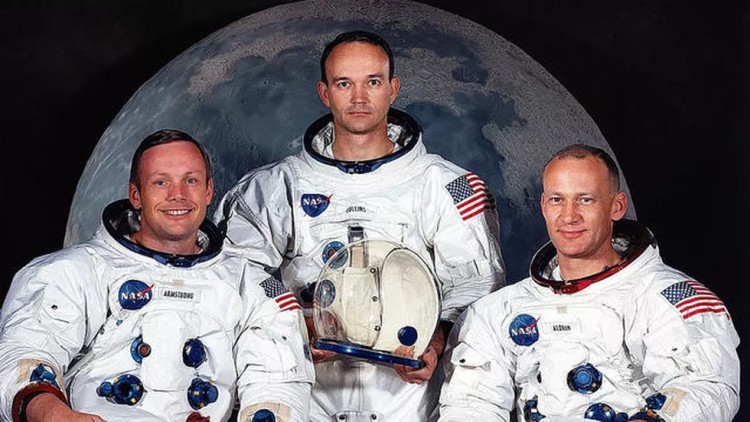 And eventually we took to the skies, in hot air balloons, dirigibles, and finally heavier than air craft – aeroplanes.And, astonishingly, only a few decades seperate those first few scant seconds in the air by the Wright Brothers at Kittyhawk and human beings walking on the surface of the moon.

Even as a child, watching and reading everything I could on the space programmes of the USSR and the USA, I wasn’t naive, I understood that the two world wars and the subsequent Cold War had driven this remarkable technological advancement, the kind of progress that took us from Von Braun’s V2 rocket, created as a weapon, in 1944 and 45 to his Saturn V rocket carrying humans to the moon in the late 1960s.

I knew this, but even as a kid I looked at the words on that plaque, on that statement on the first lunar landing on July 20th, 1969, “We came in peace fo all mankind” and I wanted to believe it. And to be fair, for many in the scientific and engineering community that was the case – they knew they were getting funding because of Cold War paranoia, military-industrial scheming and national pride, but they took that money knowing they could use it go push the frontiers of human endeavour, science, exploration and knowledge for the pure joy of knowledge. And some of them believed in that credo of “we came in peace for all mankind”. 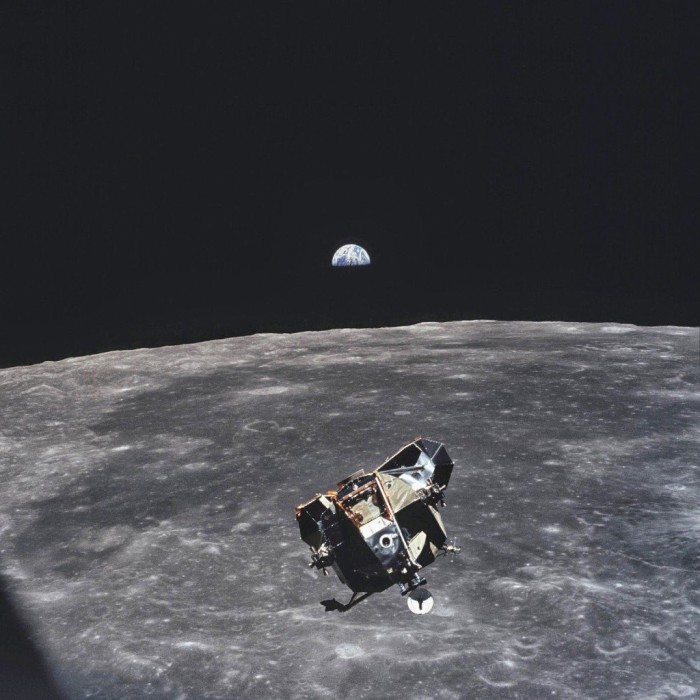 And I wanted to believe in that too, and I still do. Because it spoke of something higher than national prestige or technological posuring, it hinted at a better future, where humanity was more advanced, when we were one and striving to be the best we could be. It’s the same reason Star Trek has been such a powerful influence on my life and so many other people’s lives, not just the characters and the stories, but the future it painted, a future where humans strove to be better than they had been, to be one species, regardless of gender, or skin colour, to create a world where we expanded our horizons because we could, for the betterment of all.

Yes, I know that was Cold War propaganda, but I still loved that message, I loved what it hinted we could actually be, beyond our  our divisions and nationalistic, gender, and ethnic arguments, that we could all be humans exploring the great infinity of the universe, just waiting for us. And there we had three men, three men who truly did go where No Man Has Gone Before. And yes, I knew it was part of the nationalistic posturing and Cold War posturing, but by god I wanted it to be more than that, and I think many of us felt the same, because that one moment united humanity for a precious short time. We had done something beyond the realms of the dreams of centuries and the entire globe rejoiced.

It feels to me that too often we have stepped back from that first Giant Leap. Fifty years to this very day and we are still to go further – hell, we haven’t even been back to the moon since Apollo, much less futher. All those childhood comics annuals I read as a kid in the 70s told me we would be on Mars by now and that by the early 21st century we would all have affordable holidays on the Moon. 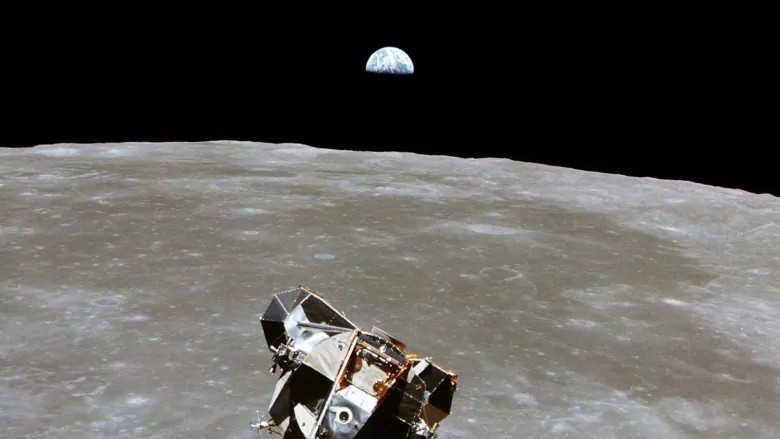 It’s fifty years on, it is 2019, and I am still waiting on that promised holiday in space. Oh sure, we have private corporations promising imminents low-orbit trips, but only for the super-wealthy. This corporate rather than national space programme has been hailed as “democratising” space, but that is rubbish, this is just for the extremely wealthy, that isn’t democracy, this isn’t for the people, it is the privatisation of the great Final Frontier by the wealthy for the wealthy with not an ounce of actual science involved, unlike the national and trans-national programmes. And my dream of every taking that trip above the clouds is as far away as ever, which breaks my heart, knowing that dream will almost certainly never come to pass.

None of that changes what happened on this day fifty years ago, though. Human beings who had started out in tiny groups of hunter-gatherers had, in the space of around 300 to 200, 000 years, evolved to use fire, the wheel, agriculture, ships, early flight and then slipping the bonds of Earth herself to fly into space and the moon. Think about that – dinosaurs, one of the most successful evolutionary genus to ever walk the Earth ruled the globe for a couple of hundred million years. In a few hundred thousand modern humans went from hunter-gatherers to walking on another world.

Seriously, think about that, think about how amazing that is. Think that within the space of a human lifetime, less some seven decades, we went from a few seconds in the air with the Wright Brothers to flying beyond our world. Our grandmothers lived in a world of horse-drawn milk-carts as girls and saw Armstrong, Aldarin and Collins flying in Apollo in their sunset years. That’s the space of time we’re talking about, it’s mind-blowing to think of how rapidly this took place, this most amazing voyage in the history of a species that has made a success of being natural explorers.

It often feels to me that we have not only stepped back since those heady days of Apollo and Gagarin, but we have become smaller. For all our technological advancements since then (when a mobile phone in our pocket, unthinkable back then, has more computing power than all of NASA had back then) as a species we feel smaller to me, we have lost that magnificence that came with the challenge of exploration. Today is it all about the Me, Me, Me individual The Way You Want It world. Not that I mind that entirely, but it needs to be balanced out against the collective, the Us. And Apollo united that Us for a few precious days, we transcended the everyday, glimpsed a better future where we grew and explored not for riches and honours but because we wanted to, because it was the best thing to do, because we were better than we had been before.

As I said I am not naive, even as a kid I knew the political and national and economic imperatives that drove the space programmes of both the US and USSR back then. But I chose to believe in the higher ideals behind it, because those are beautiful ideals, ideals of us being better as a species, of us striving as one to be better than we are, to push the boundaries, to further ourselves for the collective good of all humanity. Yes, I know, you may say I’m a dreamer. But I’m not the only one. And isn’t that a dream worth chasing…