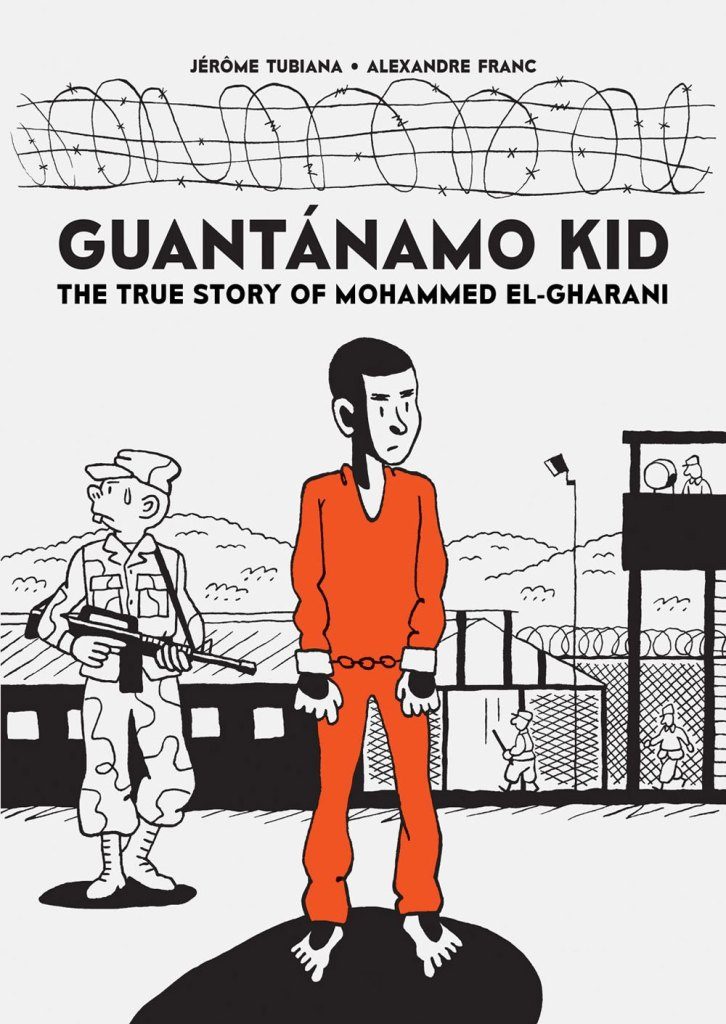 Life in the insanely oil-rich kingdom of Saudi Arabia may be great, if you are rich and male and Saudi. If you are a teenage Muslim boy from Chad, though, you’re part of the large underclass that carries out many of the day to day jobs that keep that rich country going, and you’re unlikely to even get into school (“is he Saudi? Oh, sorry, the school is full”), so your chances to try and improve yourself and so hopefully improve your lot in life are somewhat limited. And this is how we meet young Mohammed El-Gharani, hustling his day job on the baking hot streets, selling items to passing cars with his Pakistani pal Ali (names, as you can appreciate, have often been changed here to protect people), in-between chatting about what they can do to make things better for themselves.

Ali comments that Mohammed is good at learning languages, he could get better work if he learns English. Mohammed recalls an older friend who struggles to get competent workers to staff his small computer repair service, and how he’d like to try that, if he could learn (Franc shows this in a lovely, simple cartoon fashion – a sweltering, sweating Mohammed selling his wares under the blazing sun next to the dream version sitting at a desk indoors with air-conditioning as he works). Ali has a relative back in Pakistan who may be able to help – he teaches IT work and he can build his English lessons while he is there, they will be happy to put him up while he learns, before returning to Saudi. 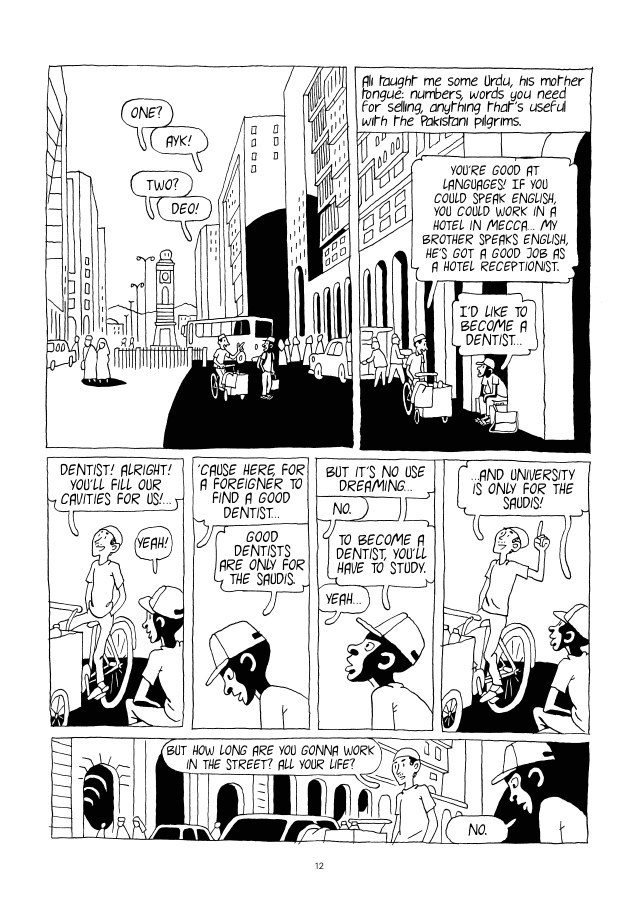 It is a well-meant gesture from a good friend, trying to help his buddy, but it will change Mohammed’s life in a way neither could have imagined. Mohammed will find himself in the wrong place, at the wrong time, after a good start learning in Pakistan (after overcoming all the obstacles to get there – the Saudis less than helpful attitude to anyone not Saudi regarding travel papers, his own family’s reluctance, money), a nice, happy time for this young man, finally feeling that he is seeing something of the world and improving himself.

Until, one day, the security forces simply arrest a bunch of people coming from the local mosque. Of course, the fact that the CIA was paying several thousand dollars for each “terrorist” suspect they hand over in no way influenced the Pakistani security forces at all, honest…

Despite being fellow Muslims, the security personnel here treat him and others abominably, beating and torture are the norm, and this is just the start; this is before he is even handed over to American agents, and finally flown hooded and manacled to Camp X-Ray in the now infamous Guantánamo. 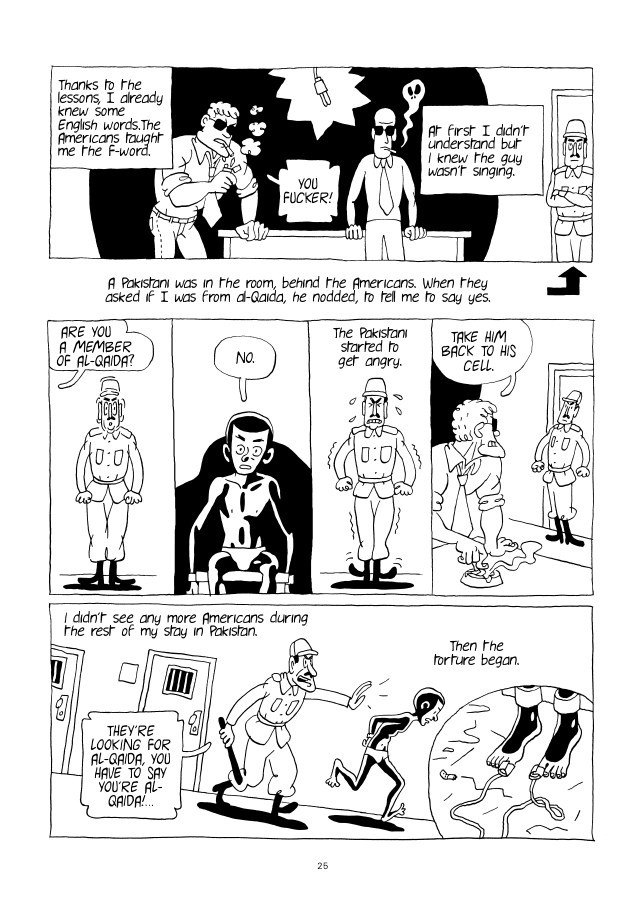 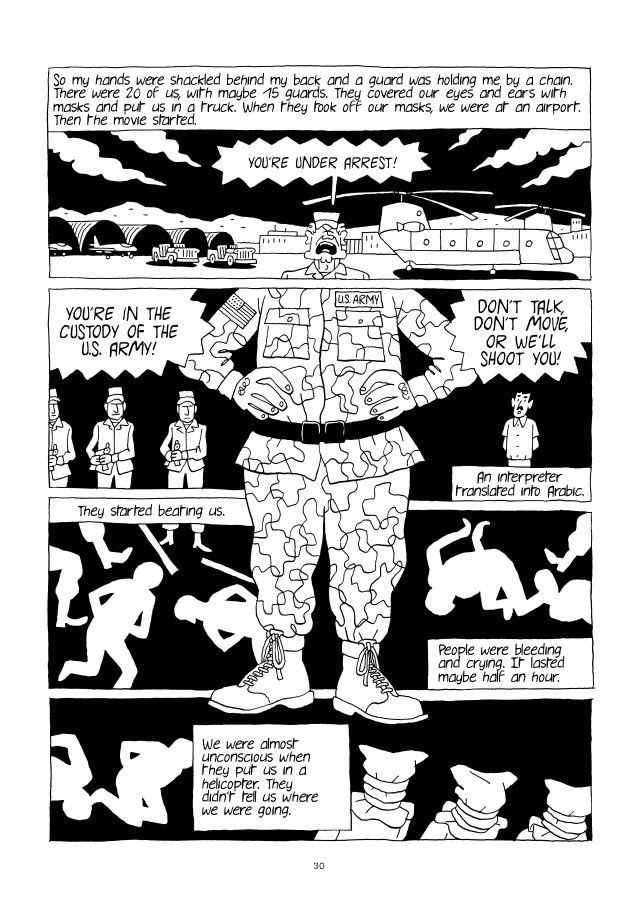 Mohammed is in a no-win situation here, nothing he can say or do will change the mind of the obsessed investigators and interrogators – they start by assuming he must be a seasoned terrorist, I mean, why else would he be here?

“We have files on you going right back to the early 1990s when you were part of a terror sleeper cell in London!”

Um, hold on, Mohammed replies, I am fourteen, and back then I had never been outside Saudi and would only be about six years of age.

You’d think at this point the Americans would realise they had just had any old person passed on to them for money, clearly this intel is totally wrong. How could a fourteen year old boy who had never left the country before have been an active terror cell member on a different continent when he was six? Naturally the US intelligence officers realise their mistake, apologise profusely to the young boy and send him home with a handsome amount of compensation.

No, of course they don’t. They just keep asking him how he knows Osama Bin Laden, when he was active in Afghanistan and subjecting him and the other inmates to a continual regime of the too hot or too cold treatment, no food, or very poor food, abuse, beatings, even petty acts like spitting on his Koran (I’m not fond of any religion, but treating someone’s holy book like that just horrible and pathetic). 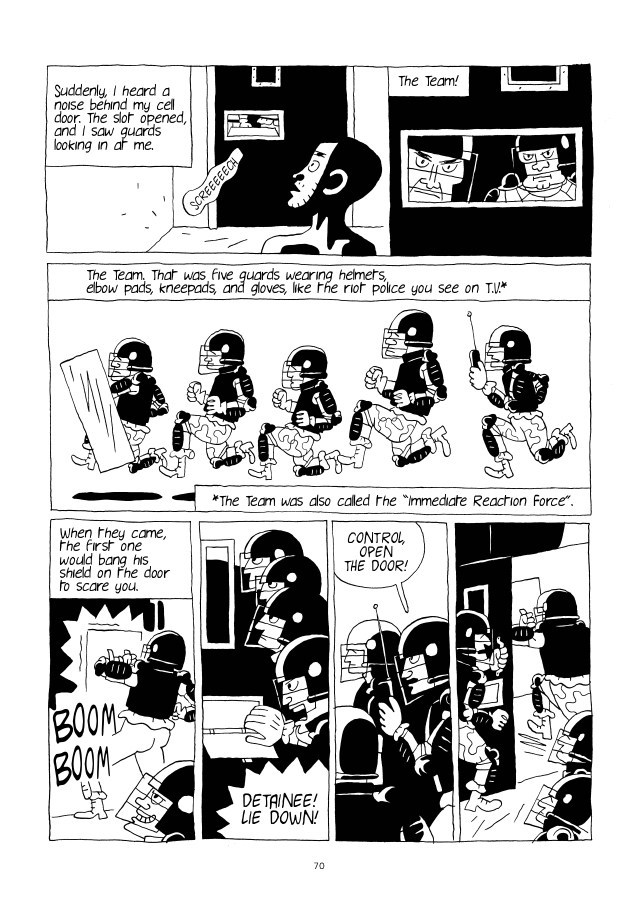 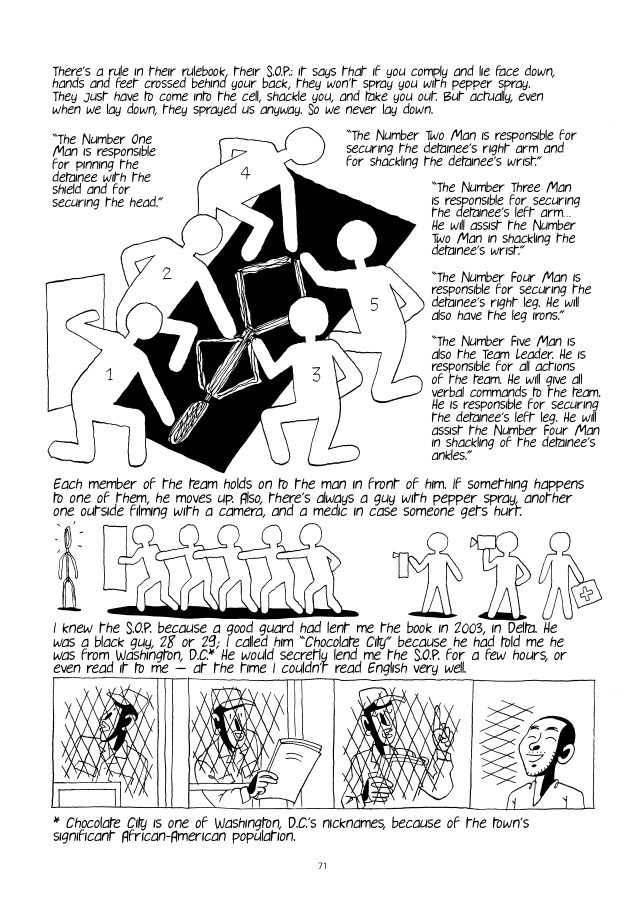 Mohammed may only be a wee, skinny lad, but he doesn’t like bullies, and he finds ways to fight back, sometimes metaphorically – singing that annoys the guards, he and other inmates shouting together, “dirty” protests (shades of A Sense of Freedom, except Boyle actually was guilty), and sometimes literally fighting back, physically attacking the guards. You may think the latter just makes his life harder, but when you are innocent, railroaded and abused, I think it’s fair to say many of us would find any way we had of hitting back at our tormentors.

This isn’t all suffering though, despite the subject matter, Tubiana and Franc do a lot to give us an impression of a real person – a young boy, full of dreams for his life ahead of him – suddenly snatched away and plunged into a nightmare not of his own making, over which the only control he can summon is resistance. We see his bonding with some of the other inmates, many of whom clearly have a soft spot for such a youngster dragged into this wretched morass, and their support helps his morale, some teach him bits and pieces, while some of the marines guarding the prisoners are not happy about the situation either and try to perform small acts of kindness to inmates like Mohammed, knowing he is innocent. (The African American soldiers seem especially sympathetic, not least when they see the racist abuse some other soldiers heap on the prisoners).

There are even moments of humour – as some CIA agents grill him, shouting “you fucker!” at him, he notes “thanks to the lessons, I already knew some English words. The Americans taught me the F-word…” 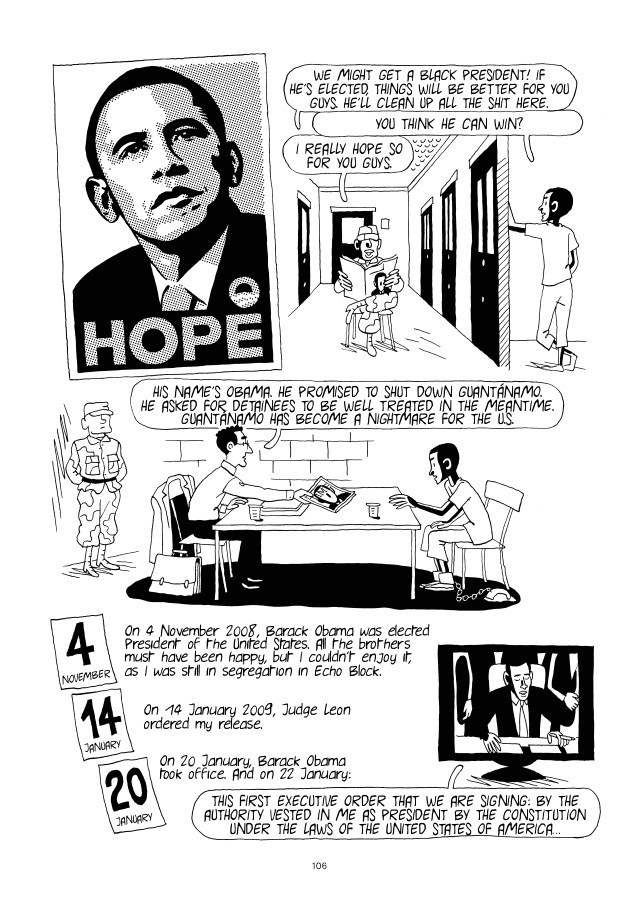 Guantánamo Kid takes us through the years of this young boy incarcerated in the camp, his suffering, his learning of very hard lessons, but also some small, sweet moments of triumph that keep him and his fellows going when it feels like all the world has forgotten them. Importantly, we also follow Mohammed after he is cleared and released, and how despite being found innocent he’s left with the stigma of having been a Guantánamo prisoner following him around, as he tries to rebuild his life and again tries to think, just like when he was fourteen on the streets of Saudi, how to better his life.

The book includes a postscript in prose by Tubiana, where he relates meeting Mohammed and learning his story, and his current status as of 2018.

If Guantánamo Kid was a fictional narrative it would be compelling enough, but knowing this is based on real events, and real events that were inflicted on a child, a fourteen year old boy who had harmed no-one (and that he was continually harmed even after it was so evidently clear he wasn’t what they claimed he was even in their own faulty intel), it has a lot of power. Few things can ignite anger more than burning injustice and bullying, and levelling those at a child is a thousand times worse.