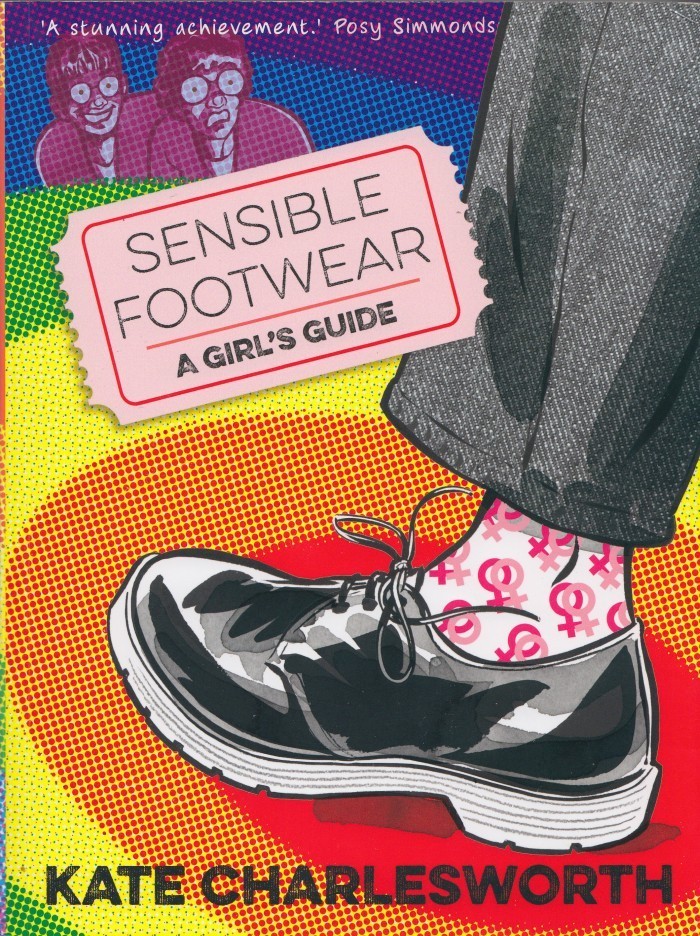 Now this, my friends, has been one of the Brit comics works on my Must Read Radar for 2019; I know Kate has been working on it for a long time, a labour of love in many respects. Kate has been contributing to the Brit comics and cartooning scene for many years, from her Auntie Studs character to the critically acclaimed (and quite brilliant) Sally Heathcote, Suffragette with Mary and Bryan Talbot (reviewed here). Kate was also generous enough to create artwork for my short story Memorial to the Mothers which closed out the double Eisner-nominated WWI comics anthology To End All Wars (thanks, Kate! You can read that story in full here on the Woolamaloo). So it is more than fair to say I have heard snippets about this work in production for quite a while and now, finally, thanks to the nice people at Myriad (surely one of our most creator-supportive UK Indy publishers?) I had the chance to read it.

And then re-read it.

Short version: it’s brilliant – it’s a wonderfully warm, often very smile-inducing and laughter-creating, emotionally engaging tour through the last few decades of Queer life and culture in the UK and further afield, intertwining both Kate’s own life experiences as she grows up with the wider cultural and historical changes taking place, which gives Sensible Footwear both an over-arching, wide-ranging historical arc but at the same time maintaining a close, personal aspect to it that allows the reader to experience this as more than historical events or social-cultural changes, we can feel the impact on a more individual, emotional level. 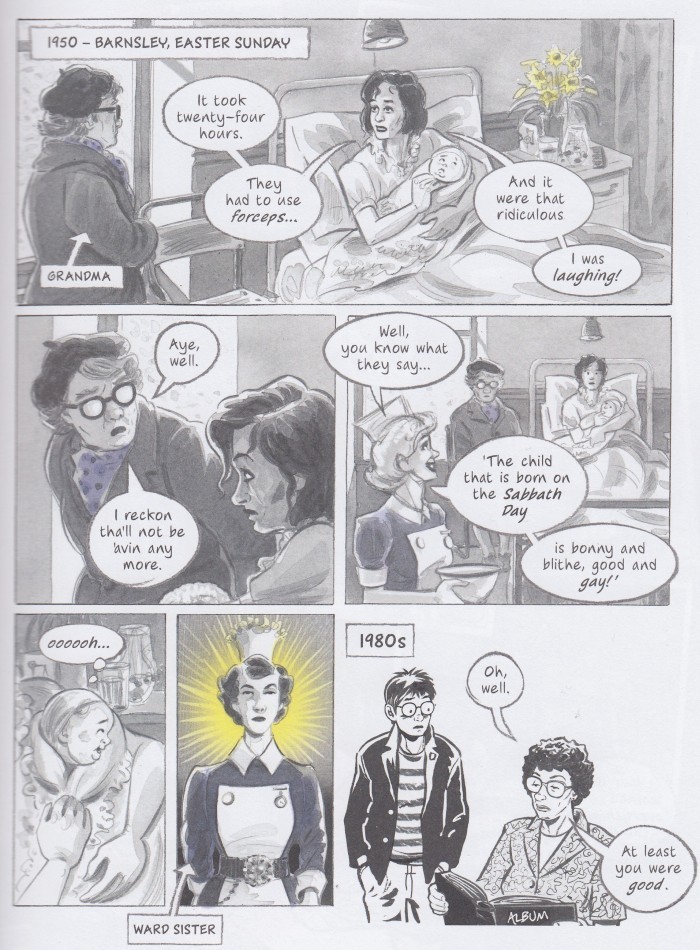 From the hidden gay (predominantly male homosexual) subculture of the 50s and 60s (yes, including the delightfully cheeky and risqué Round the Horne) to the heady days of Stonewall and beyond, the Women’s Liberation Movement gaining ground in the 70s, the increasingly visible presence of LGBT people and the push for more tolerance for all, the horrible early years of the AIDS outbreak and more, along the way taking in lovely little asides on a myriad (no pun intended) of gay icons, from Dusty Springfield to characters from Coronation Street.

Woven through all of this socio-cultural history we also have Kate’s own story, from childhood through to that great rite of passage so many of us go through, the first move away from home to go to college, to adult life, to exploring what her own sexuality and romantic inclinations are, the friends and lovers she meets, the people who inspire her, the intolerant elements she and friends band together to stand against. It’s all laced with a lovely, warm humour throughout – right from the start, after an introductory scene of Kate and her partner Diane on holiday with friends, discussing the old days (a framing device used through much of the book, linking past and present nicely), we go to Barnsley in 1950 and Kate’s birth, which includes a cheeky moment of baby Kate seeing the ward sister and being somewhat smitten. 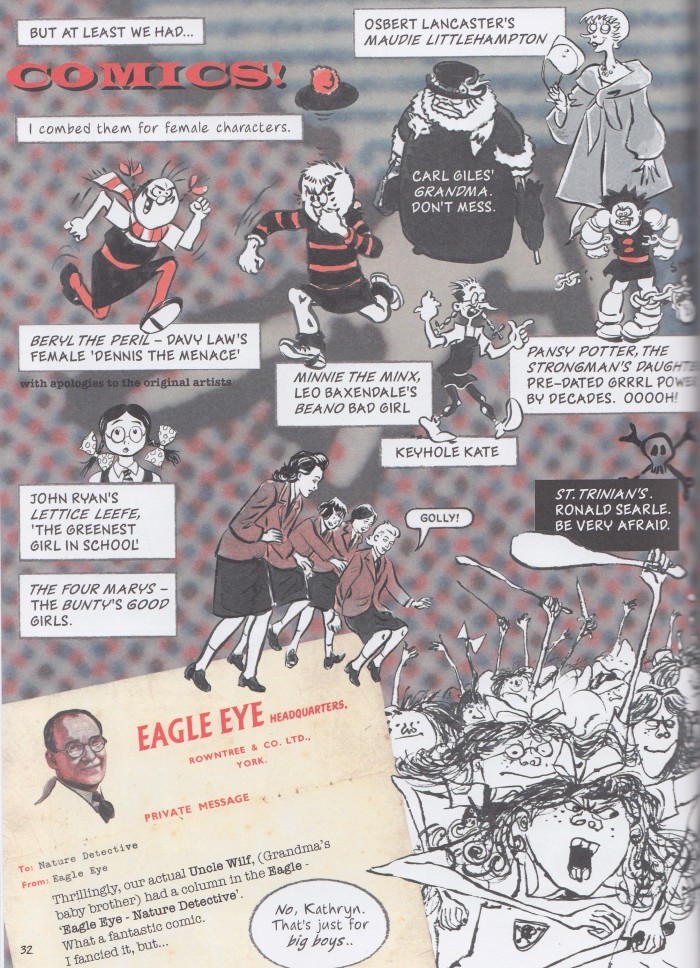 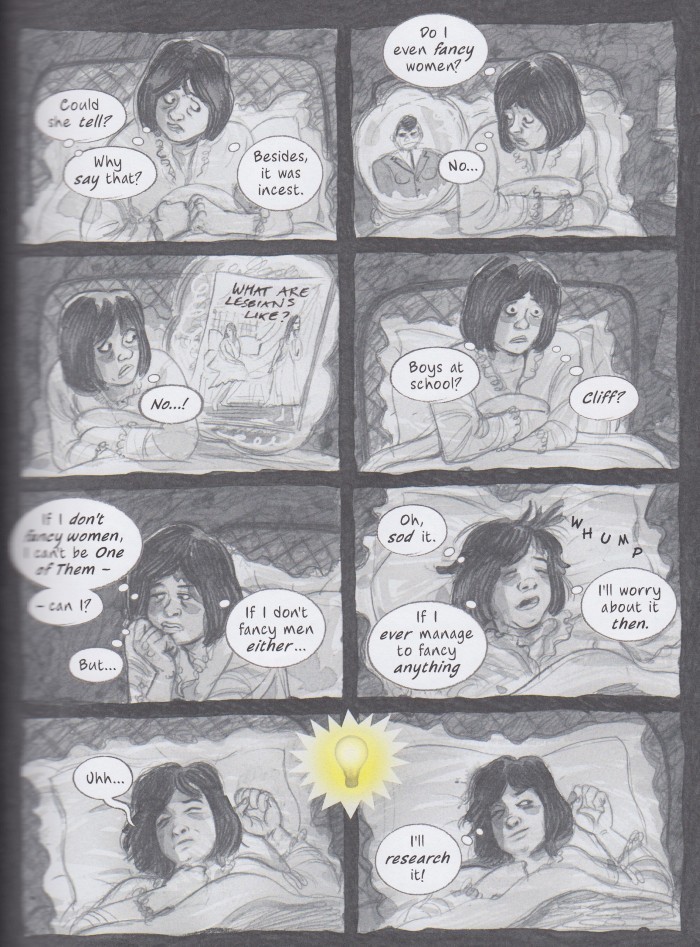 There is more of that kind of scene as we see her growing up – as a family wedding approaches the young girl wonders what the husband is actually for. And she is less than impressed at being dolled-up in a fancy, very girly dress to be a maid of honour, not her kind of thing at all, oh no. Mind you, she is rather taken with the bride. There are a lot of gentle intimations here that Kate is not going to grow up to be the “regular” young girl then young woman that her family expects (thank goodness!). Balancing this out, later sections in the book hark back to those earlier days, of getting older, starting to realise she is a lesbian and not knowing how to tell her family, how they will react, but we find out as we go on that actually there were more secrets in the family cupboard she simply knew nothing of when growing up and questioning her own feelings and inclinations, because those were generations that simply didn’t share certain things, not even among their nearest and dearest.

Even today coming out is often not an easy thing for anyone – growing up is rarely simple, we’re all trying to figure out who we are, what we want to be, looking for role models and inspiration and supportive friends who will help us. How much harder when society was so horribly bigoted and intolerant? Yes, we have plenty of bigots today – sadly they seem to be on the rise again, racism, sexism, homophobia – but it is still very different, both society’s general attitude and also the law’s stance (where LGBT people are recognised and afforded the same rights and protections any of us should have). 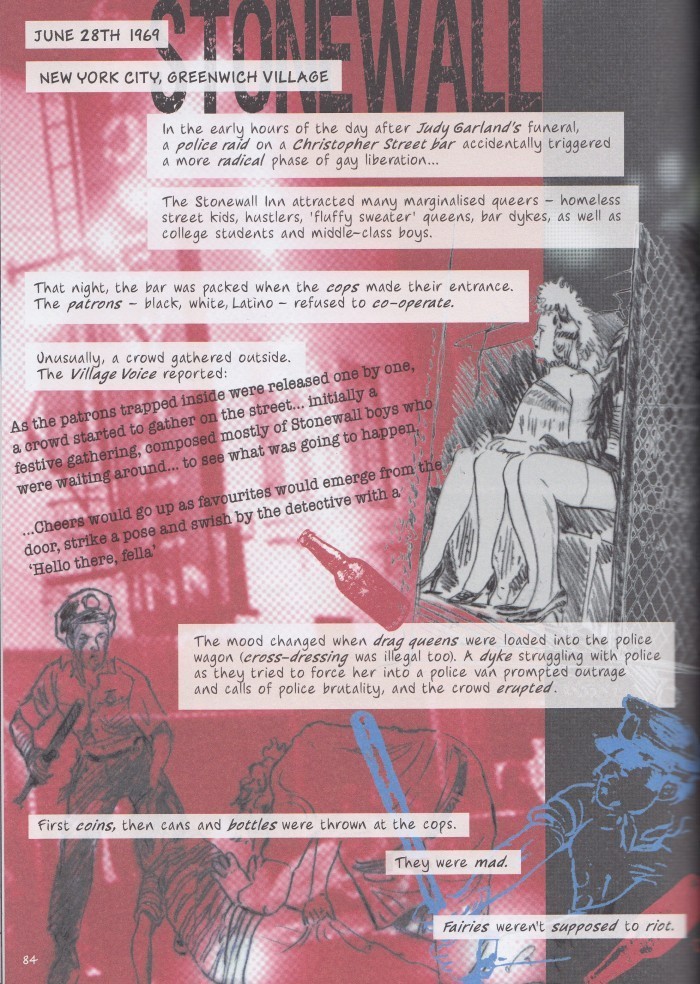 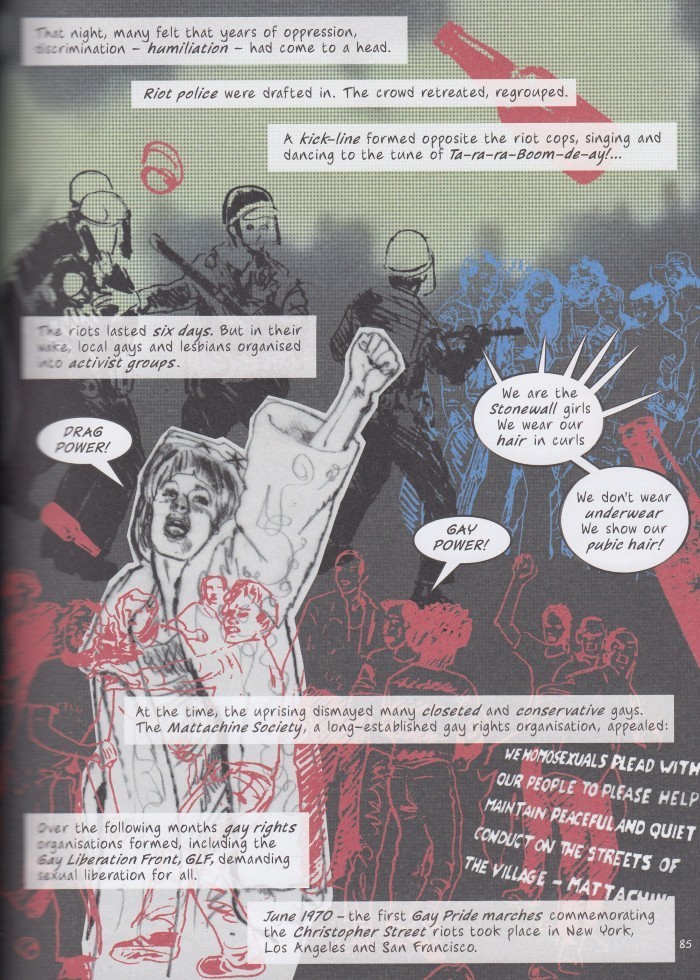 And here we get to see where some of those changing attitudes – and political and legal changes – came from, with groups inspired by Stonewall, the first gay rights movements, the increasingly important woman’s rights movements, the push for greater racial tolerance. I was reminded a little of Sally Heathcote, where Kate and the Talbots made it abundantly clear that the Women’s Suffrage movement was never just about the vote, it was about a whole range of important social issues, including healthcare and educational opportunities. Similarly here, we can see how the fight for tolerance, understanding and equality for any one group is, in reality, always about tolerance and understanding and equality for all. Or as congressman John Lewis, Civil Rights veteran and one of the original Freedom Riders, put it when equal rights for gay marriage was proposed in the US:

If you needed any more reminding of that, just think how the same, vaguely-worded Obscene Publications Act that was used to try and stop some gay publications – state censorship, effectively – was the same Act used to try and shut down counter-culture publications like Oz, or, even in the 80s and 90s Tony Bennett’s Knockabout having to fight the Act and HM Customs over importing underground Comix. Like I said, these rights and tolerances – or lack thereof – affect most, if not all of us in some way or another.

For readers of a certain age there is also a lot of nostalgia and a strong sense of “oh, I remember that” moments throughout Sensible Footwear, from the idolising Honor Blackman and then Diana Rigg in the Avengers (strong women characters that took no nonsense without every losing any sense of the feminine) in the 60s to the hideous Mary Whitehouse and her Festival of Light, using religion as a way to demand that what people watched or read conformed to what they approved of (chilling, and still has echoes today with some (mis)using religion as an excuse to practise bigotry), or “God’s Cop” James Anderton (a favourite of Thatcher), the imposition of the Section 28 whereby the government tried its best to suppress discussion of gay culture, to the emergence of AIDS and the rampant hatred that often followed this in the press of the time, rather than extending sympathy to those suffering illness or losing loved ones. 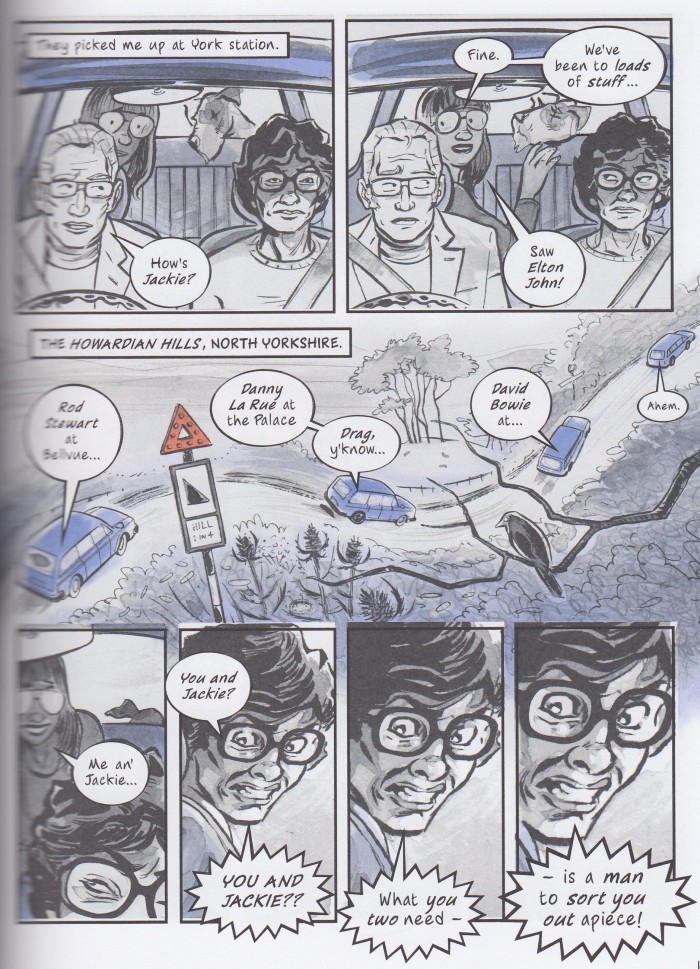 But through all of this weaves Kate’s own story, or more accurately Kate and all the people she has interacted with, friends, lovers, other creators, support groups, family, beloved icons (Dusty!), a reminder of how what is personal and individual to us or our small circle of friends is also part of the larger picture of our ever-changing society, and this makes the events covered in this history much more accessible, more emotionally personal, regardless of the reader’s own orientation. The artwork moves from cartoon to an almost collage style when incorporating numerous old publications, or flyers or badges or media clippings from the time, with good use of colouring and shading for different aspects of the story or different times being depicted.. The art is also frequently funny – young Kate staring into a mirror after he friend asks if she may be a lesbian, trying to see if it is obvious, is just one of many parts that had me laughing out loud. 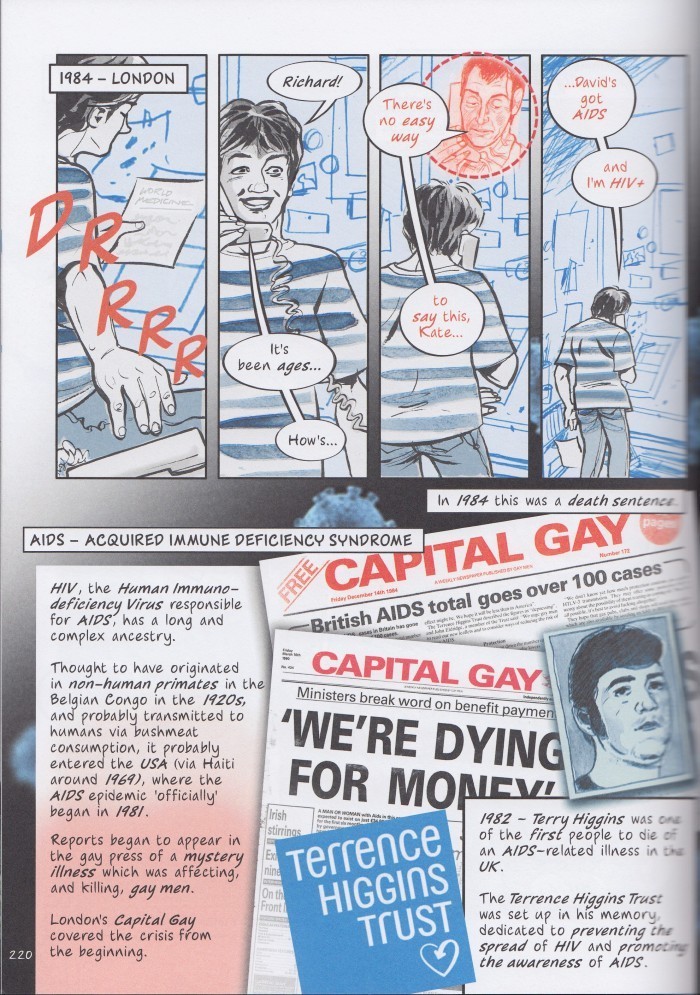 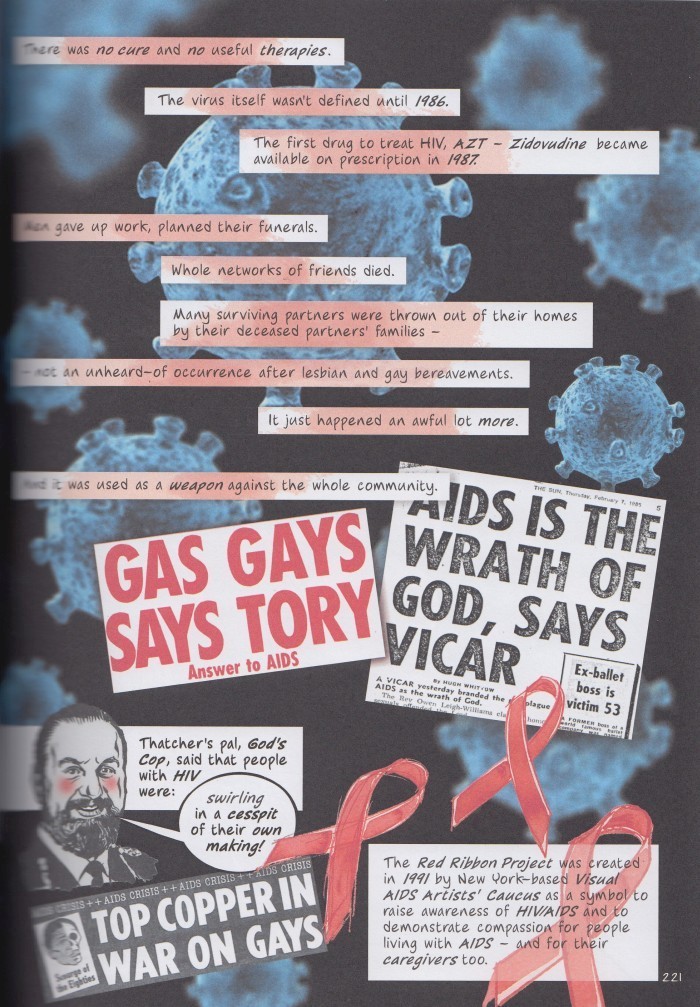 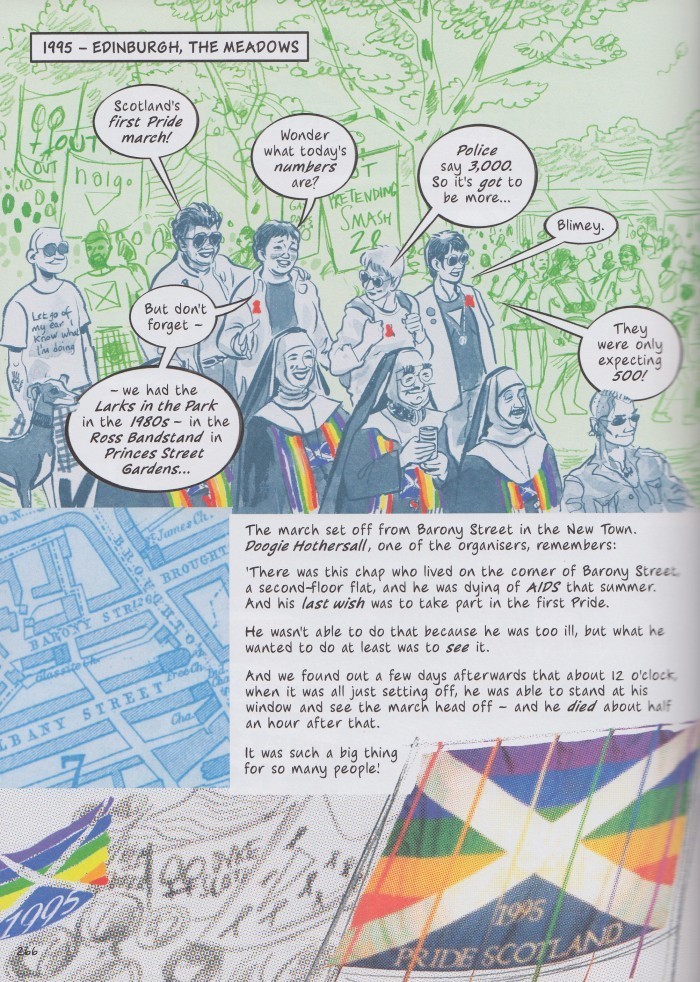 Sensible Footwear can’t, of course, be an encyclopedic history of all of LGBT culture in the UK for the last few decades, and Kate notes that herself – there is only so much anyone can cover, and besides, as she also comments, everyone’s experience is a bit different, so you can’t always show what every single person was going through. What it does do though is encapsulate several decades of LGBT history in a very accessible manner, often touching on areas some of us might not even have realised were important to the emerging Queer Culture at the time, and shows how it is part and parcel of the forever changing, diverse nature of our whole society, not apart from it. And most of all that wonderful, warm, personal aspect to the whole book that engages you, like a chat with a dear chum over drinks on a summer afternoon. A book that left me with a very satisfied smile on my face.