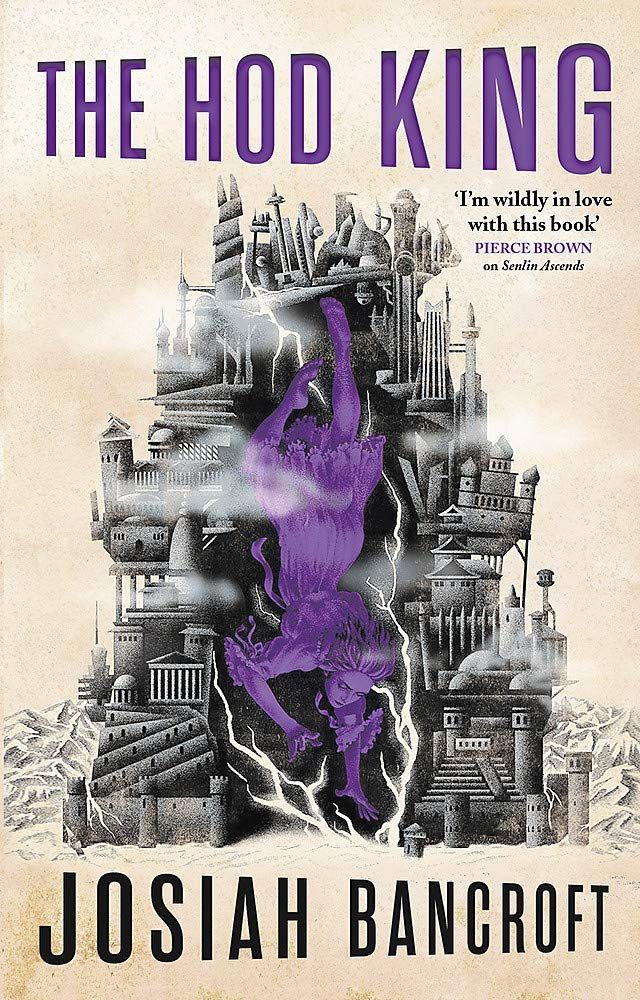 I described the first of Bancroft’s remarkable Books of Babel series, Senlin Ascends, as “an engrossing, intoxicating delight”, back in 2017. Now into its third volume (of a projected four, I believe), I stand by that description. There can sometimes be a tendency for series to flag slightly in the middle volumes, but both this new third volume, The Hod King, and the previous tome, Arm of the Sphinx, have been, for my money, even better than the first book. I confess, I am smitten with this series, its main cast – poor rural headmaster turned reluctant adventurer Tom Senlin, his missing wife Marya, the irrepressible Voleta, the strong, determined Edith, the mighty yet surprisingly tender-hearted warrior Iren – and its astonishing setting, no less than the Tower of Babel itself, each massive round floor its own “ringdom”, the mysterious upper levels lost in clouds, the original builders and the maintainer – the Sphinx – now almost legend and myth.

Having encountered the mysterious Sphinx in the previous book and finding that person to be far from a myth, our reluctant adventurers are now sent forth on new business – Tom, having overcome his accidental drug addiction, is removed from his former crew and sent ahead to the ringdom of Pelphia, where the missing wife he has been seeking to find and rescue is now known to be living (married to a noble of the ringdom and apparently content, her old life and husband forgotten). He has strict instructions to carry out business as a spy for the Sphinx, although it is made clear to him his personal goal of communicating with his wife, to see if she is truly happy in her new life or wishes to be spirited away, will be supported later by the Sphinx. Naturally Tom gets himself into all sorts of trouble fairly early on – we would expect no less! The question arises, however, when he goes off-mission, is he really breaking the Sphinx’s commandments, or is he merely doing exactly what the Sphinx expected and planned for him to do?

The rest of the crew returns to airship life, although not their tatty old ship, but the fully updated and restored flagship of the Sphinx, the State of the Art (I did wonder if that was a nod to Iain Banks?), with Edith, now fitted with a new “engine” by the Sphinx (a mechanical arm, making her one of the Sphinx’s “Wakemen”, a group of augmented beings spread through the ringdoms and, nominally at least, agents of the Sphinx), becoming captain, much to the approval of the rest of the group. They are to tour the ringdoms, to show off the gleaming, powerful ship as a form of diplomatic gun-boating (behold the power of the Sphinx) and they are to dock at Pelphia, where Voleta will be passed off as an aristocratic lady to this pompous society, in an attempt to contact Marya while also obtaining items the Sphinx requires.

Of course, no plans survive contact with the enemy, and it isn’t long before both strands of this two-pronged tale, Tom’s trials and Edith with the airship crew, start to unravel, forcing them to adapt to often brutal changes or perish. And then, behind the scenes – almost literally, in access shafts and trails hidden behind the walls of the ringdoms – there is another plot brewing, Luc Marat and his army of zealot Hods we encountered in book two have more going on than anyone, even the Sphinx, suspected, and who is the Hod King they acclaim in secret, away from the free people of the ringdoms? There’s a real sense of a mighty storm brewing here, of conflicting forces that have been hidden for many years about to erupt, which may dictate the future of all the people in all of the ringdoms of the Tower, or even, perhaps, if there will still be a Tower…

“They’ll say no, no, no, women are weak. They’re foolish. They need looking after and direction. But I think deep down they can’t forget they came out of a woman, were nursed by a woman, and had their little minds sculpted by one as well. When they grow up, just the thought if it makes them uneasy. But rather than face their fear, they look for ways to dominate and possess us, to create proof we are weak and they are strong. I’ll tell you this: the harder a man brags about his thunderous escapades in the lady’s boudoir, the more frightened he is...”

This growing urgency in the narrative goes hand in hand with strong development and growth of the main characters (the huge, powerful warrior woman Iren is especially nicely handled), in a way I found most satisfying. As with the first two volume though, the intriguing characters (who I have totally fallen for) and increasingly complex conspiracies and plots, while a delight, are only a part of the pleasure of Bancroft’s writing – his way with words, his assured, lyrical descriptive passages (he was a poet before he was a novelist, and it shows in his beautiful way with words), and the mischievous sense of humour, and some nice gender moments (he has some very formidable female characters, often far more capable than the men, as the themselves note), all combine to make this one of the best forms of books – the type you can totally lose yourself in.