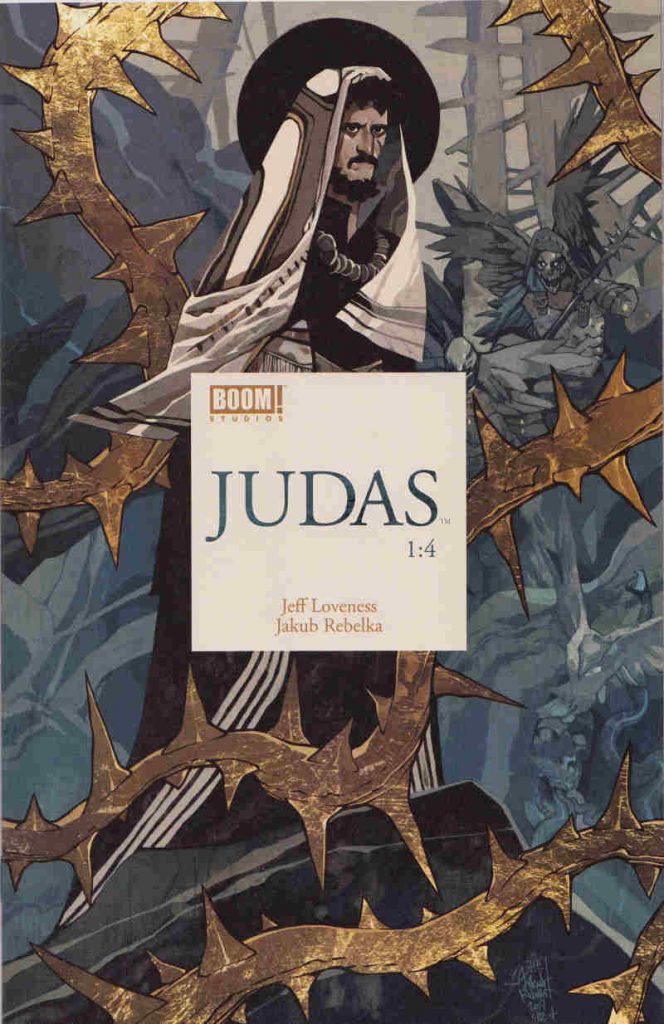 Performing my normal early-morning perusal of the new titles at the start of New Comic Book Day, this one jumped out at me, something a bit different from most of the other four colour delights on offer this week. Judas is a character I have found fascinating since being forced to sit through excrutiatingly boring Bible classes on a Sunday as a child. I always found the simplistic portrayal of Judas taught in those classes to be very limited – they were, unsurprisingly for those kinds of indoctrination groups (because that’s what they really were, as far as I could see) it was presented in simple black and white, good and bad lines.

This always seemed to me to be skipping serious questions around the supposed greatest betrayal in human culture: was Judas just selfish and evil, and that is why he betrayed his friend (and saviour)? If he was evil then why on Earth did Jesus ask him to become one of his disciples? Or was it his plan all along to use Judas to betray him because he needed a sacrifice, even of himself (and how many tales of various gods involve some kind of sacrifice, deities, it seems, just cannot get enough of those) and here was the perfect man to use, his very own patsy, his own Oswald? If so that’s hardly the actions of a decent, moral person, is it? 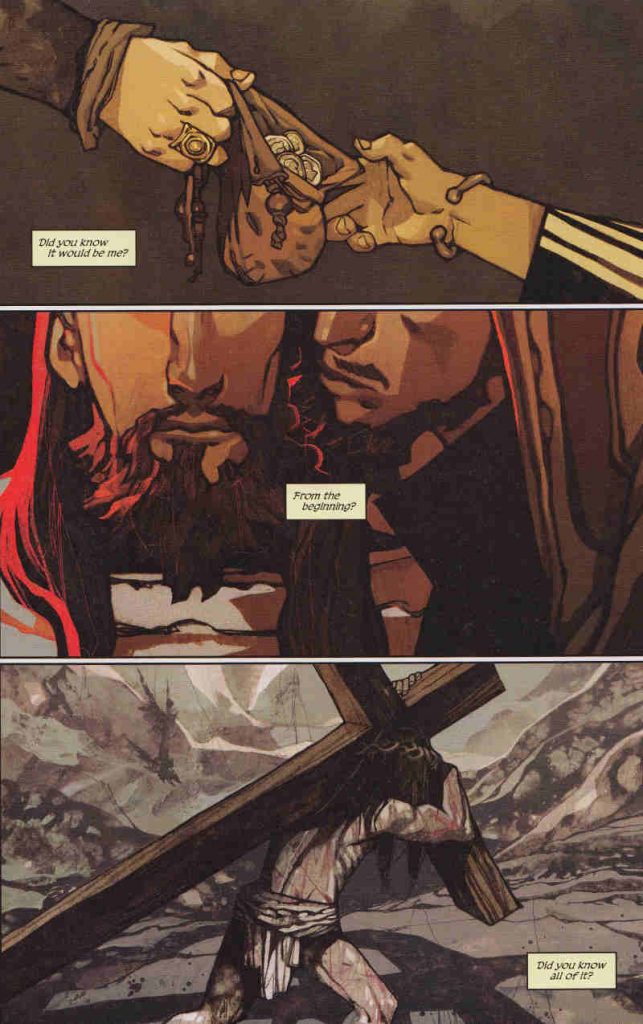 Or was it that Judas knew this had to happen and only he could do it, knowing he would be damned for it, but he did it for the greater good, off his own bat or because his friend told him there was no other way, it had to thus and only he could do it? There are many complex moral and philosophical questions around that kiss, the thirty pieces of silver, that betrayal. And if all that happens is God’s will then presumably the betrayal was always ordained, and so poor Judas was a marked man from before he was born (and does that mean he is responsible for his actions then?). Indeed some gnsotic texts – beyond the pale to mainstream religious authorities – hail Judas for setting in motion what had to happen for human salvation.

Where the teacher in Sunday School was reluctant to engage, I have found over the years that many others have had similar thoughts, and the character of Judas has been explored many times in fiction, those complexities of the nature of morality, responsibility and destiny (free will or are we all following a pre-ordained script) and more have been fertile grounds for compelling drama, so it’s hardly surprising storytellers would pick up on it, from novels by Amos Oz or Tosca Lee, to the film Dracula 2000, which wove the myth into the vampire tapestry. Only a couple of years ago W Maxwell Prince and John Amor gave us the interesting Judas: the Last Days, which I found fascinating – review here. Loveness and Rebelka’s take, certainly in this first issue, continues that tradition of mining the motivations and actions of Judas Iscariot for some exceptionally compelling human drama. 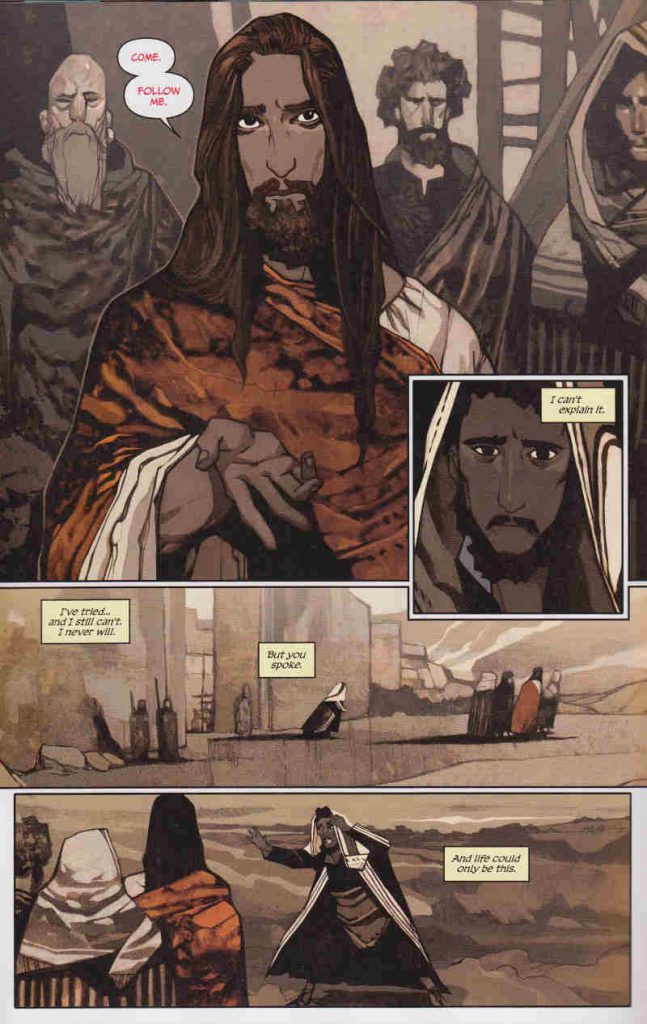 That infamous betrayal is handled economically but efficiently and powerfully within the first few pages – this is a well-known story, and both writer and artist know they need only call forth a few specific scenes, such as the bag of silver coins, the leaning in for that kiss to mark out Jesus, the carrying of the cross by the scourged Christ, then the suicide by hanging of a bereft Judas, and those are sufficient to conjure forth the story in the mind of the reader. It’s a lovely bit of efficient and yet powerful storytelling by Loveness and Rebelka, and those few panels have real power, even to a non-believer like me (because this ancient story is a powerful one, regardless of faith or lack thereof, its human aspects make it endlessly compelling). Especially that single panel of the kiss, only half of the faces visible, below the eyeline, the intimacy and the betrayal so close they are interwoven, the colours muted, save for hints of bright red highlights that hint at the blood to be spilled. 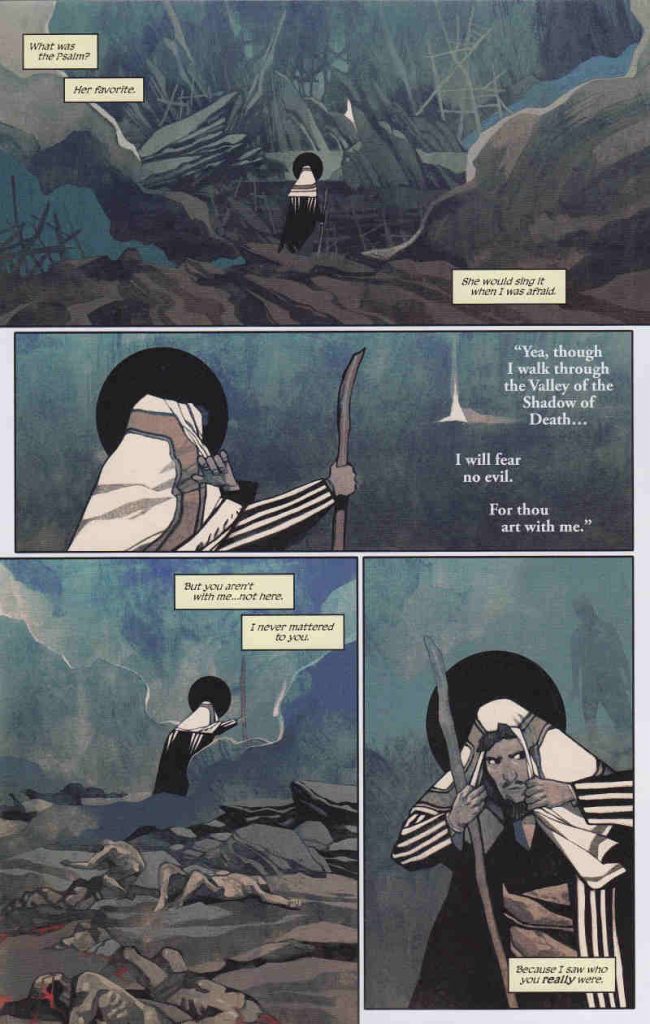 By only the third page we have seen the kiss, the betrayal, the thirty pieces of silver and the sad, lonely suicide, dangling from a solitary tree as a blood-red sunset stains the evening and night falls. And then Judas opens his eyes to find himself elsewhere, somewhere dismal, horrible – the Pit. Where else would the great betrayer go but Hell, of course? But does he truly deserve to be there? As he starts to walk through this nightmare landscape and the damned souls and the demonic entities that reside there to torment them, his dialogue continues and we see flashes back to his life on Earth, before meeting Jesus, and then also as a disciple.

And he asks the questions many would ask? He believes in his Lord, but if he can truly heal the sick, why are so many ill? If he can feed the hungry why do so many starve? If he can raise the dead, why then do we endure the immense pain of losing our loved ones? And if he was his friend and the source of all forgiveness, couldn’t he forgive Judas? But as Judas recalls the overpowering call from his very first encountered with Jesus, of hearing that voice calling him forth, he also recalls another voice, one which sowed doubts, that told him to question, which would lead him to this path in life and the hereafter and even now, in Hell, he can hear that voice still… 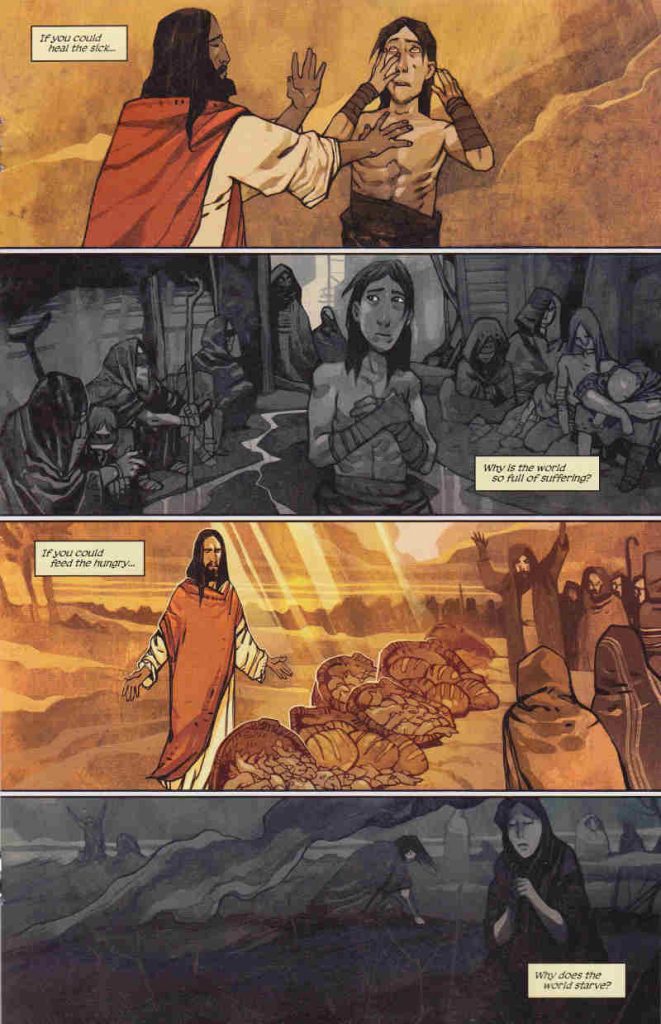 This is a hugely thoughtful and compelling piece of storytelling, and beautifully handled by both writer and artist here. There are some lovely touches too – in a lot of early Christian art (and indeed still common in the likes of the Eastern Orthodox Church art), the disciples and saints are often depicted with their golden halo (usually like a bright, golden disc behind their heads), and here Judas too has such a symbol behind his head, but his is jet-black instead of the glittering gold of a saint, a small detail, but a very telling and clever one, or little changes in lettering by Bell (Jesus’s lettering in red, seems to infer a voice different to normal ones, a voice that cannot be ignored, that compels, reminiscent of Jesse Custer in the Preacher comics). One of the more unusual comics of the year, and one which not only spins a good narrative, but which will leave you arguing with yourself over morality, the nature of free will and more questions that have been asked for eternity and which we rarely can answer completely.