The Can Opener’s Daughter, 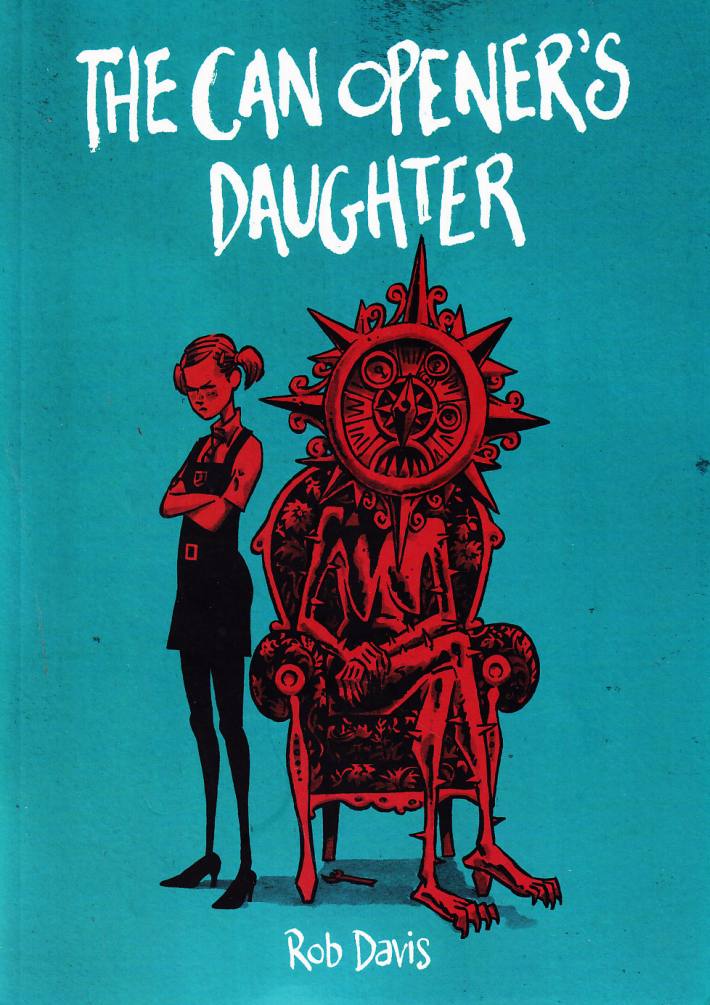 “I thought boys were great. I wanted to punch every one of their cheeky little faces till they bled. Well, that’s what I thought I wanted to do to them.”

Here’s a book I have been eagerly waiting to get my ink-stained paws on, the follow-up to the frankly brilliant Motherless Oven (reviewed here by Richard) by Rob Davis. Where the first volume focused on Scarper Lee, the schoolboy whose Death Day was fast approaching, this book gives us some of the answers behind one of Scarper’s questions about the strange girl who arrived in his school then, with his friend Cas, turned their lives upside down – “who the hell is Vera Pike?” We start with a younger Vera, who like Scarper and everyone else in the previous book, has a mother and father that she made. In her case, as you may infer from the title, her dad is a can opener. Her mother? Her mother is a terrifying looking being, an incarnation of the Weather Clock (the very one that caused events like the rain of knives we saw in the previous book). She is also the Prime Minister. And she drinks a lot. 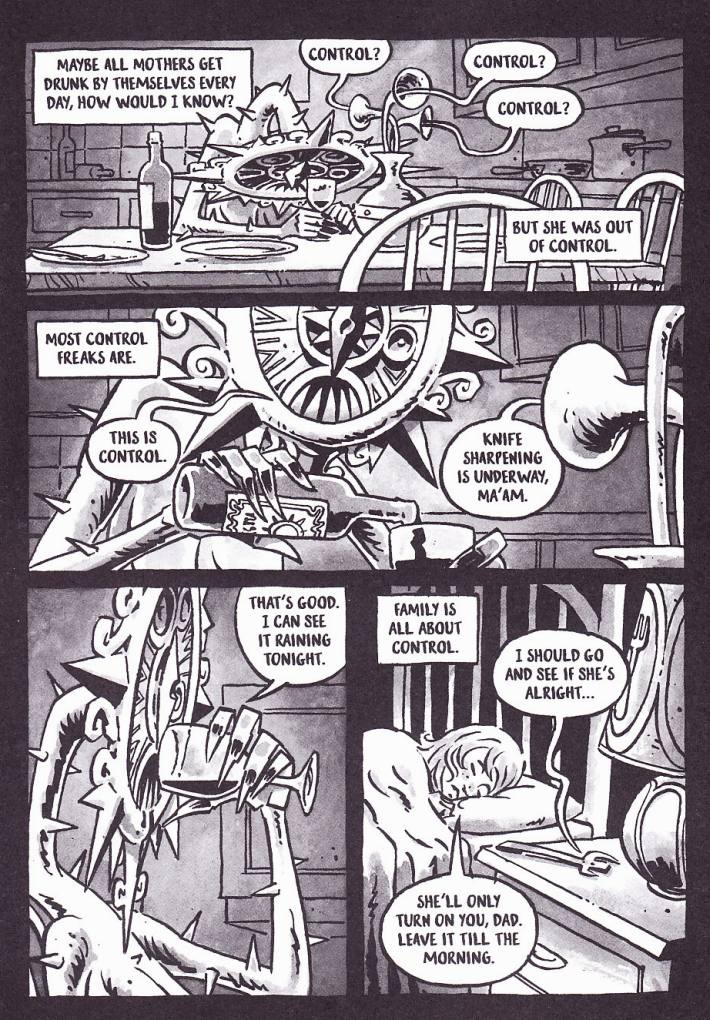 But not of the Bear Park, that strange and compelling mixture of the everyday British suburbia and the often disturbingly bizarre. No, they live in Grave Acre, clearly a much more upmarket place. And as the kids here don’t make their mums and dads, she isn’t allowed to let anyone know that the weather clock is her mother. And as we slowly come to realise, she may not even be the actual weather clock but another version who has challenged her for supremacy. And like many hungry for power she’s increasingly paranoid, using and abusing anyone around her for her own ends, happily bringing forward people’s Death Days if they anger her or could possibly be a threat. Even she can’t do that to her own daughter though, so she does the next best thing to infanticide – she ships her child off to a boarding school, the wonderfully named Saint Sylvia’s School of Bleak Prospects and Suicide, peopled by horrid posh girls like Fonella Bonelli-Magee. Of course they look down on the new child, especially as she only has “half” a name and, shudder, she doesn’t have a name-plate…

“Ever the rebel, eh? Of course, everyone is a rebel when they’re young. Then they grow out of it. That’s because real change means taking power, and power makes monsters of us all. It requires that we do monstrous things.”

I don’t want to get too deeply into the narrative though – this is a book to get lost in, and I really don’t want to risk any spoilers here ruining your experience of it. As with Motherless Oven the book is suffused with some remarkable imagery throughout – the strange, recursive artwork of the “immortals”, the people who invented death, hanging up in the Prime Minister’s residence. In fact there is so much delicious detail throughout this is a book you’re going to probably want to re-read pretty quickly – I read this just before Christmas and planned to get a review up in time to include this in my Best Of the Year list, but I had to go back and give it another, slower read to let more of the details – and the atmosphere – seep in (so I’ll doubtless include this in my 2017 Best Of list now). 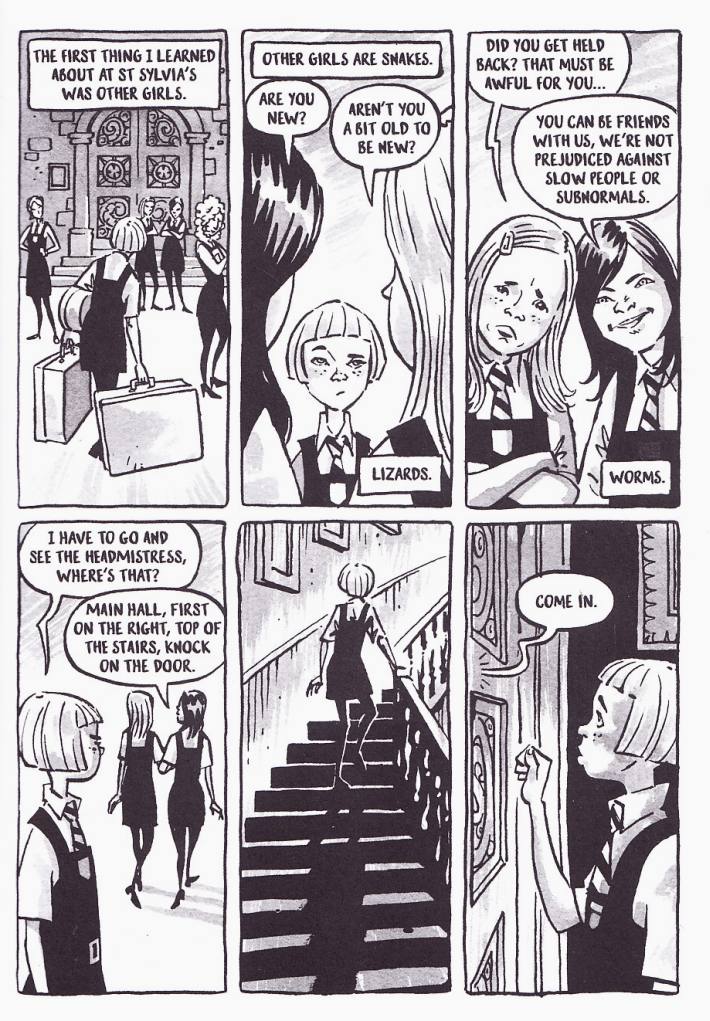 The use of the school is clever, giving us a chance to learn more about this strange, familiar yet alien world through the odd lessons Vera is forced to sit through. It also gives Rob a chance to work in some St Trinian’s homages, which is no bad thing. There’s a lot more world-building going on here – as well as exploring some of Vera’s back-story and the events that lead up to her coming into contact with Cas and Scarper which we saw in Motherless Oven we really get much more of a sense of this reality Rob has conjured up, and a much deeper handle on Vera, why she is as she is, perhaps we even get to understand her more than she understands herself, and with that understanding also comes an inkling of subversion and change to how that world has been ordered up till now, just waiting to happen, perhaps already starting to happen…

There are disturbing scenes – ruthless enforced “suicides”, strange creatures in the woods (an almost Terry Gilliam-esque moment), the vile, monstrous, terrifying Stour Provost, the literally jagged mother, but also lots of humour, much of it gallows-dark or deligtfully absurd. There’s the eternal push-pull dynamic between parents and child, of social class, of youthful fire and rebellion (and that rebellion where you know you want to fight against.. Well, not exactly sure, but you know you need to do it and it makes you angry), of the hunger for power and control and answers – but they may be answers you don’t like and that power you so covet comes with a hard price… 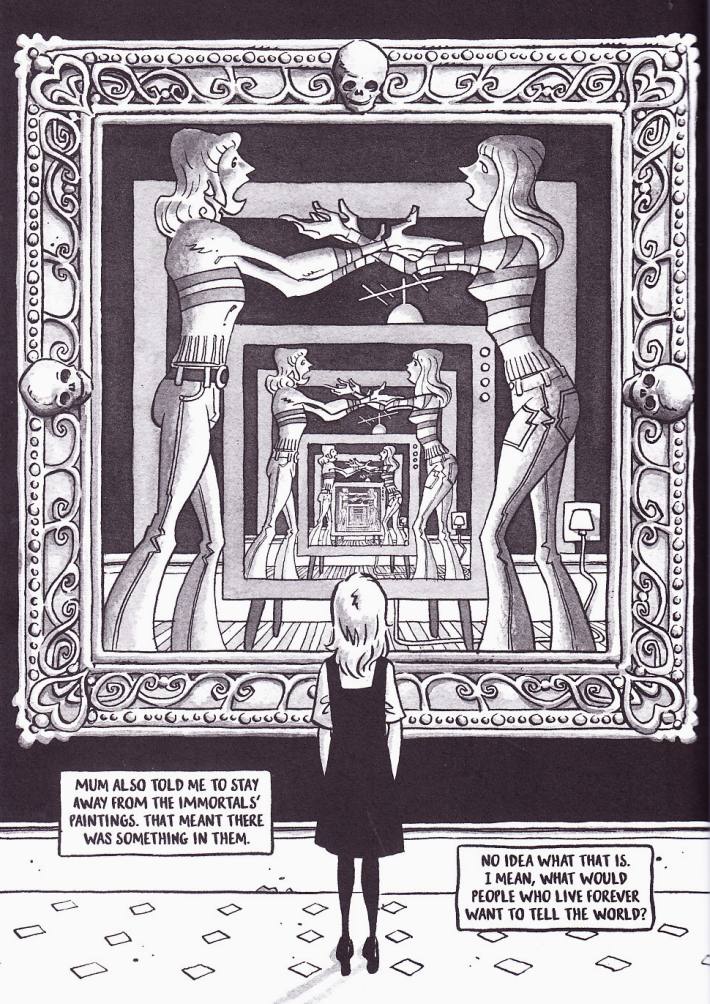 The art is superb, from the cheeky smirk frequently found on Vera’s face to the varied designs of the mothers and fathers, with so many fine touches like the heavy black background for scenes in a chamber of horrors below the police station (home of the awful Stour Provost) that bleeds out a feeling of wrongness and oppression, the comical statue gods in the gardens, or the haunting paintings of the immortals that are endlessly recursive, images repeating and looping back again and again on themselves.

This is some of the best contemporary British comics has to offer – clever, compelling, immersive, brilliantly illustrated,  and it’s one of those books you will want to come back and re-read again and still find more details you didn’t spot before. Simply brilliant. 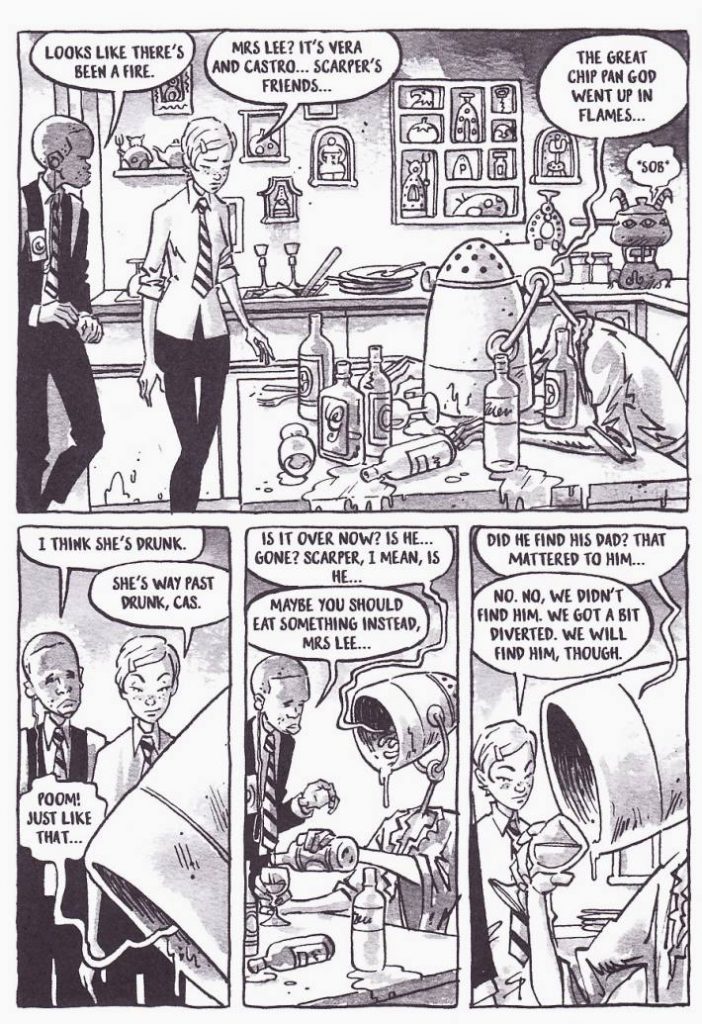