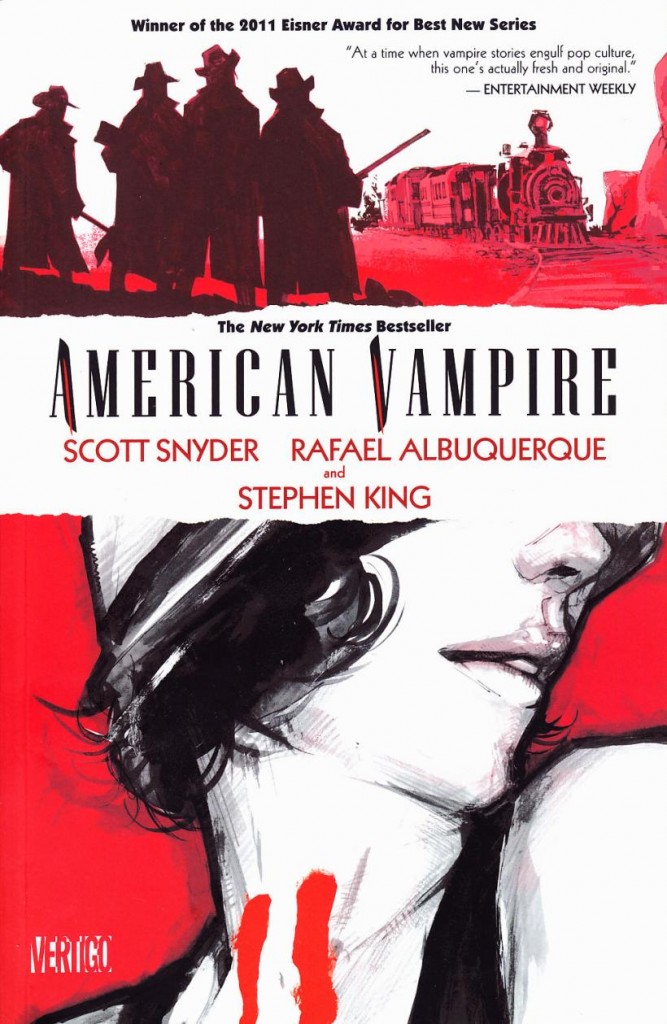 Scott Snyder has really established himself as major comics writing talent in the last few years, not least with his highly regarded Batman run for DC’s New 52, but arguably it was his and Rafael Albuquerque’s American Vampire which first seriously established his credentials as a new writer to watch out for, and the fact that the first volume includes work from no less a literary luminary than Stephen King doesn’t exactly hurt. I’ve a long fascination for vampire and Gothic tales, but it’s not an easy genre to do something new with. Every now and then someone reworks the genre and shakes it up – Stoker took the earlier 19th century tales and crystalised them in Dracula, Anne Rice revamped (pardon the pun) the genre in the 70s with Interview With the Vampire, Twilight brought romantic vamps to a mass teen audience while Niles’ 30 Days of Night made them gut-wrenchingly monstrous and terrifying once more. It’s one of the reasons the genre refuses to lie quietly in its coffin, but always rises again in one form or another, to stalk our nightmares, the vampire mythos is, in the right hands, endlessly elastic and able to be refitted to suit so many cultures and times. And here, these are the right hands.

The first volume is split into two linked tales, switching back and forth between them, and it isn’t titled “American Vampire” for nothing – these two settings are ones which strongly evoke a sense of Americana from their respective eras, periods most of us would associate so strongly with the US, the final decades of the Old West in the 19th Century and the early days of the silent movies as they establish themselves in a booming LA in the Roaring Twenties. Cowboy gangs and vengeful lawmen on horseback (hell, there’s even a train heist thrown in!) on one side, the glitz and sleaze of early Hollywood and Flapper girls trying to make it in the big city on the other. They’re well chosen eras that ooze the sense of the period, even now, and Snyder, King and Albuquerque use them to give their vampires a uniquely American personality and setting. Yes, there are more traditional European vampires here, hiding in dark corners, away from the sun, greedy, decadent, self-satisfied Old World monsters, much like the east coast wealthy elite who, for all the republican nature of the US in the 1800 and 1900s, were Old World style aristocracy in all but name. 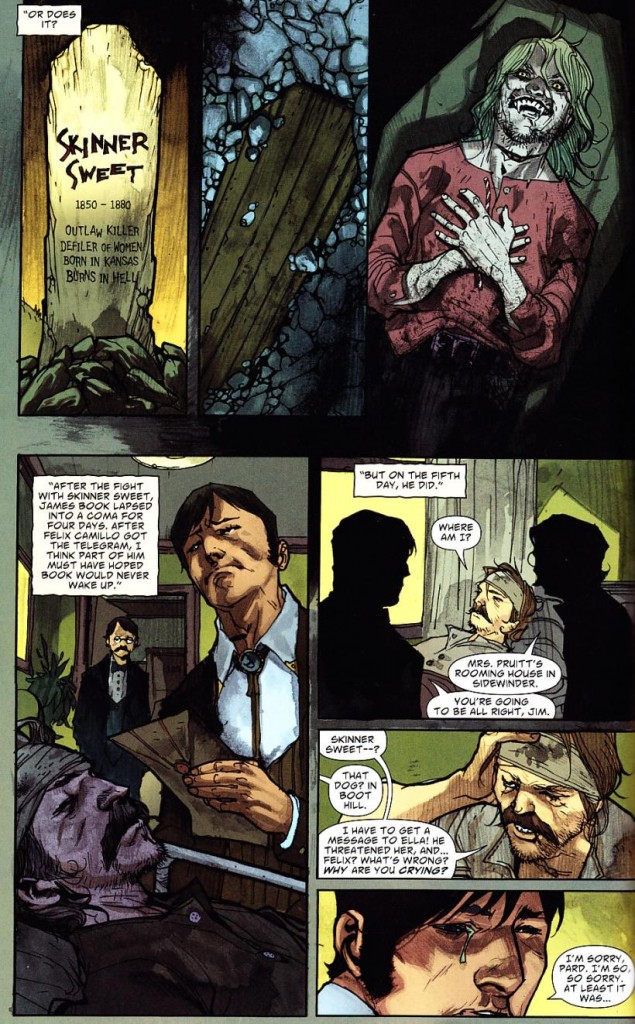 But this is America, the land of opportunity, where you can arrive with only a dollar in your pocket but build yourself up, or at least so the myth that everyone can make it goes. And here that seems to apply to the undead as well. And when a hard-nosed lawman tracks down and captures the infamous Skinner Sweet (a gang leader with a real sweet tooth) at the behest of a wealthy banker (whose banks Skinner robbed), it sets up a chain of events none of them could have foreseen. The wealthy banker is in fact secretly an Old World vampire, here to mine the Western Frontier for new wealth, but when Skinner’s gang ambushes the train carrying him, in a rescue attempt, a fight ensues, and while the lawmen are distracted the vampiric banker attempts to deal with Sweet himself, but Sweet doesn’t die easily and wounds the vampire, his blood falling onto Sweet’s open wounds. Forced to flee he doesn’t realise at first that this has transformed Sweet, but when he does suspect he arranges for a dam to be built and buys up the local town before it is flooded – thus drowning the cemetery in which Sweet lies. Vampire or not, he can never rise now, or so they think… 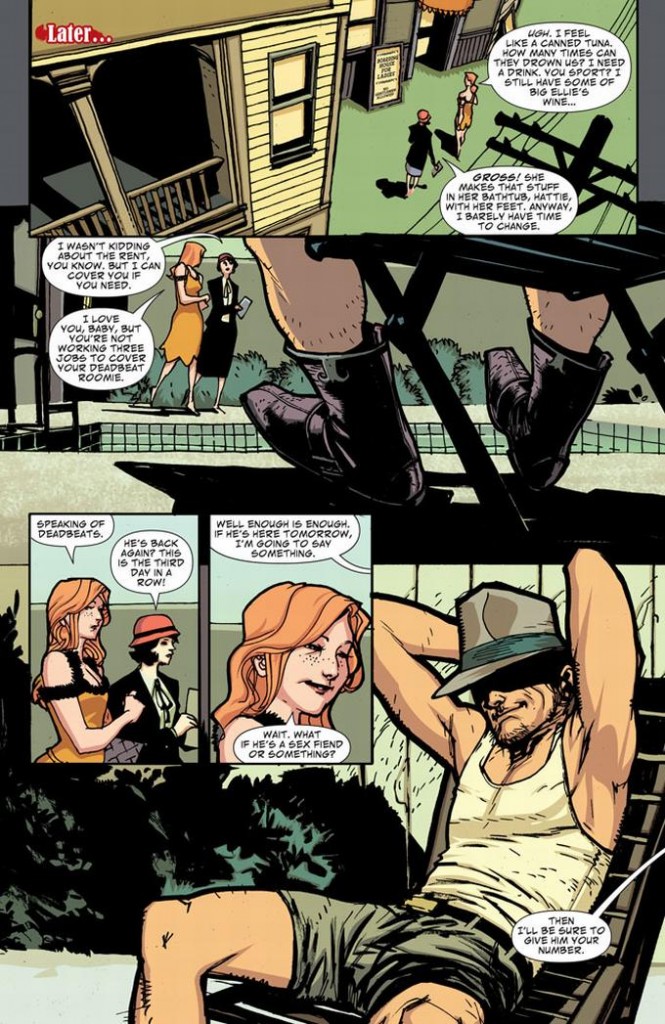 But this is, as the title implies, a new type of vampire – somehow the alchemy of the change brought on by the vampiric blood causes something different in this New World, creating different vampires, with different powers and weaknesses, and Sweet does eventually rise, and soon discovers his new powers. He doesn’t need a gang anymore, not with his abilities, he can tear a place apart all on his own. And he does. But when he surfaces again in the 1920s, despite still being a killer, he seems to have his own agenda, and he actually warns two naïve young actresses, Pearl and Hattie, about attending a party thrown by one of the major studio heads, but they don’t listen to him, and at the party Pearl is taken to a private room, where it turns out more of those in power are also Old World vampires, eager to use and abuse her before dumping her body in the desert. But like Skinner, she doesn’t die and instead transforms, desperately trying to figure out what has happened to her, what these new impulses and abilities are, and as she comes to terms with them, determining to take vengeance on the powerful men – these smug, wealthy, Old World vampiric elite – who did this to her. 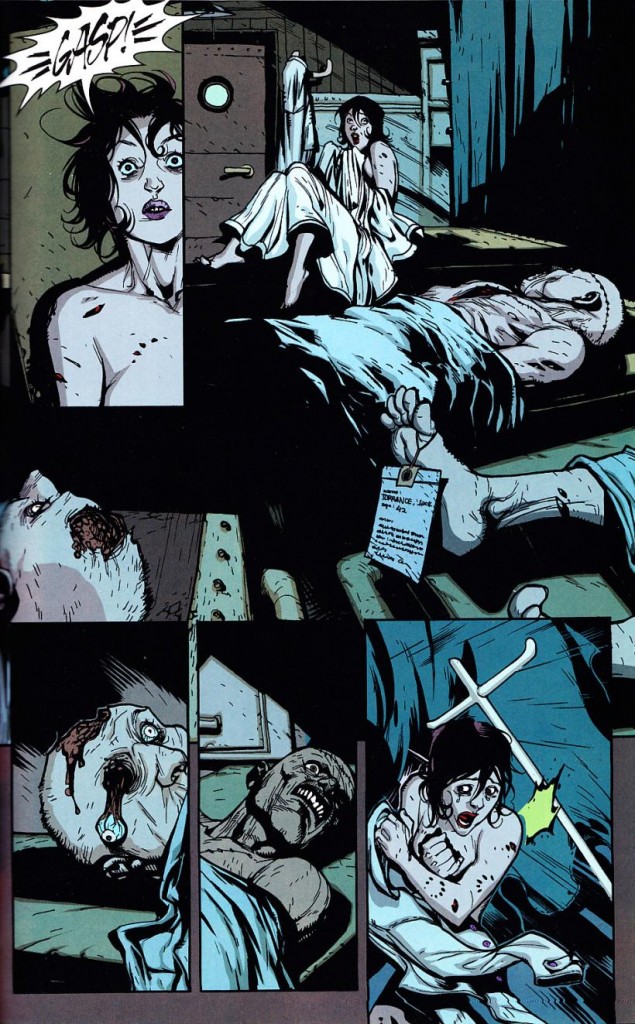 ”You, Pearl Jones, are a different kind of vampire… Just picture it in automotive terms, Bloch and his kind, they’re like old, broken-down European clunkers, okay? But you and me, Dolly? We’re like shiny, new 1926 Fords, top of the line, just rolled out onto the showroom floor.” Skinner explains why he and Pearl have different abilities from the Old World vampires.

It’s a hugely compelling read, and a great twist on the old vampire mythos, and it really does give it a truly American identity. Both story arcs plunder their periods for detail and atmosphere, and Albuquerque does art duty on both, handling Old West and Roaring 20s Hollywood with equal dexterity, giving us cowboy raiders attacking a train, or riding into a sunset on one chapter, or a Flapper Girl making her way in this brave, new post-war boom world of the big city, the bright lights (and dangers), and the lure and magic (and hidden darkness and sleaze) of the emerging magic factory that was Hollywood in the 20s, going from a wonderfully demonic grin on Skinner’s face in his Boot Hill coffin to Model T cars chugging along 1920s LA’s boulevards. Both periods, which could so easily have clashed, dovetail nicely, and of course in the real world the tail end of the Old West did indeed overlap with the early years of the movies, with genuine Western characters moving to LA and taking part in Hollywood’s early “horse operas”, so they’re a good choice for linked tales, and they are eras we’re all used to from a thousand films and books (and as I said, also suitably, iconically American), so we instinctively recognise the styles and tropes of those historical periods.

And it mixes well with the great American myth of itself which grew up during that great Westward Expansion and carried into that new modern, 20th century era (building bigger, better, smarter, always upwards, onwards, boudless optimism), but here translated to brash but bright, eager, capable new energies of new kinds of vampires, evolved to suit this New World (and totally vulgar to the sensibilities of the Old World vamps). I’m always impressed when someone can do something fresh with the vampire myth, and here King, Snyder and Albuquerque have done just that, giving horror fiction terrific new characters in Skinner Sweet and Pearl, in a book dripping with period atmosphere and style.