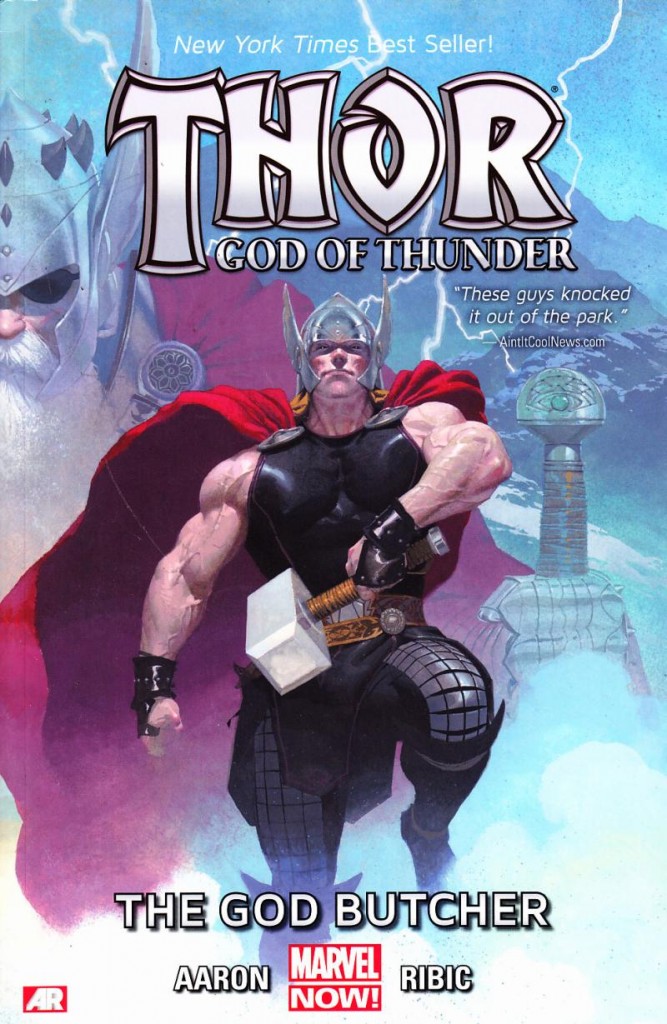 893 AD, the Icelandic coast. The Norse settlement has been bedevilled by a Frost Giant, and had prayed to their gods for relief; the god of the thunder answered their prayers. Thor, the Odinson has already battled and slain the Frost Giant by the time we pick up this story, and is now drinking and feasting (eating more goats than the rampaging giant did, we are told) with the locals as they tell tales of the battle. But this isn’t the Thor we know, this is a much younger Thor, the Thor before he was worthy enough to wield the mighty hammer Mjölnir. This is a much more cocky, undisciplined Thor, overly sure of his own power and ability, and the praise of the local Vikings isn’t exactly dampening his already large ego. But when they spot wreckage and body parts in the sea nearby, Thor’s self-belief may be shaken by what they uncover…

As they gather to examine the remains, most are pulped beyond recognition, save for a head. And from the head they realise this is not some fellow Viking whose ship was wrecked, this is the head of one of the “feathered” natives of the semi-mystic land to the west of Iceland, across the dark ocean, the Vinland precious few Norsemen claim to have visited. An old, wise woman examines the head, but she sees something else beyond the severed head of a man from a distant land. She asks Thor to look into the eyes and say what he sees there. And suddenly Thor is startled from his complacency (beautiful character art from Ribic here) – he sees a god. This is the head of a dead god; a dead god who died with absolute terror in his eyes. The question is, who or what kills gods? But this is just the first taste of deity murders to come. 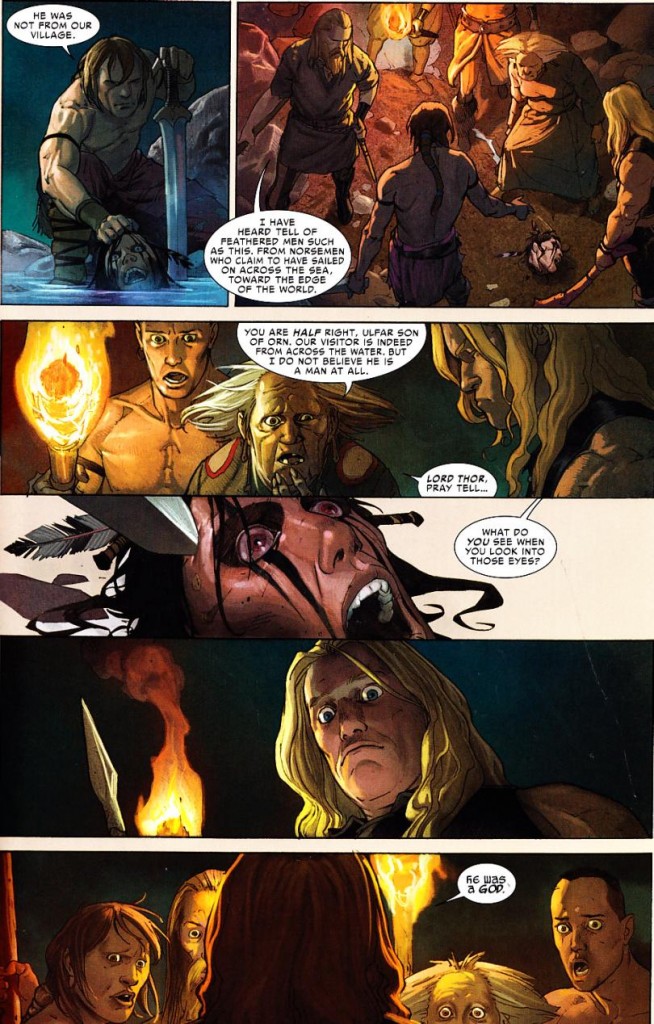 We move to the present day, in deep space, the Thor we know today, Mjölnir in hand, answering another prayer, but this time on a distant world. He aids these desperate aliens, bringing a storm to quench their long drought, then asks them (over some of the local ale, naturally) why they didn’t pray to their own gods for help. We have none, they answer, older among them vaguely recall tales from their parents before them of gods, but they are long gone. Curious, since almost all worlds and cultures have stories of gods, Thor investigates, soon finding the sky palace of this world’s gods. And there he finds them butchered inside, every last one. Not just killed, butchered and clearly tortured, their deaths made to last a long time. Thor has a growing sense of unease – he has seen this millennia ago and thought the God Butcher long dead. But this looks like his work, and if he has somehow returned then he knows many more gods – perhaps entire pantheons on every world – will be slaughtered…

Then we glimpse the far future – beyond even the time of Ragnarok itself, towards the end days of the universe. And in a ruined, shattered Asgard only an old and weary Thor remains, grey-haired, one-eyed, slumped upon the throne in the great hall, looking very much like his father Odin once did. His hall besieged by the God Butcher’s creatures, all other gods, even his own kith and kin, gone, fallen. He summons enough energy for one final battle, knowing he probably can’t win, but wanting to die like a Viking, on his feet and in battle. But even this may be denied to him; the God Butcher wants him beaten again and again, but not killed. Much more painful for Thor to live, the very last god in the entire universe of time and space (the Butcher even finds a way to move through time to find and kill more deities), knowing he failed – the God Butcher has kept him till last just to add that extra level of pain upon the Thunder God, to hurt him even more than he could with physical torture. The Butcher has a very “special” relationship with Thor… 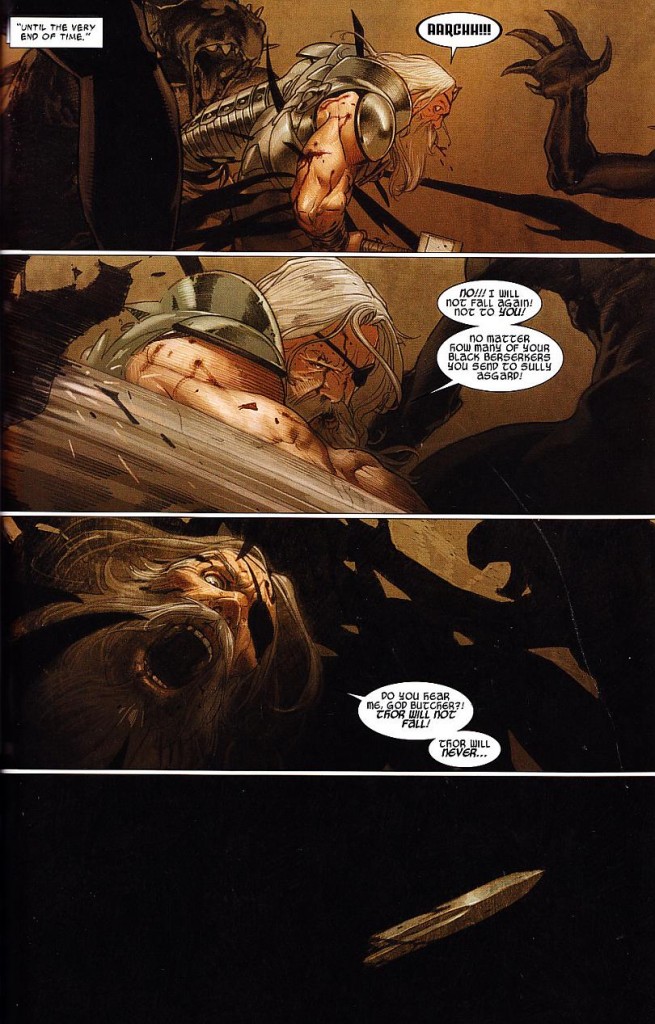 The triple timeline viewpoints Aaron constructs here aren’t just a clever narrative device to allow him to give us overlapping events eons apart, or to remind us that Thor and his fellow gods are to all practical purposes immortal, going on age after age, although they certainly function on both those levels. But that three-part structure also allows Aaron and Ribic to indulge both themselves and the reader by giving us not one but three versions of Thor at different ages. We get the not terribly smart and far too damned sure of himself young Thor, certainly powerful, brave and able, but way too cocksure and smug with it. No wonder this version has yet to prove himself worthy of Mjölnir. The thing is that young version of Thor, in a Viking setting, leading longships of Norsemen on a mission, is terrific fun and the closest to the great Norse myths of the sort of Thor who would fly up north when bored just to pick a fight with a few Frost Giants. But that Thor is also, let’s be honest, grating too, so it is perhaps as well that this tripartite story structure means he never outstays his welcome to go from brash fun to annoying. And the triple timeline approach also gives us a nice view of the Thunder God’s life, from youthful boisterousness to more mature, thoughtful, responsible hero to finally the old king, seeing him across his long lifetime, how he changes through his experiences and responsibilities (and what remains the same).

The main plot, despite the clever three-timeline structure, is essentially straightforward, a seemingly unstoppable and truly vile evil being who goes from world to world seeking gods, any gods (gods of war, gods of poetry, he doesn’t care) and who doesn’t just want to kill them, he takes pleasure in it, even more pleasure in drawing out their deaths. And as Thor uncovers more he discovers from an ancient library that records all to do with every god anywhere, gods and entire pantheons have vanished many times over the life of the universe. And yet until Thor encountered the God Butcher nobody has ever bothered to investigate why – not even Thor. Gods are jealous creatures and care little for other gods, the librarian chides him, and Thor knows it to be true and ponders what this says about his fellow deities. And then realising until his battle with the Butcher he had never given the disappeared gods a single thought, he thinks, what does it say about me? 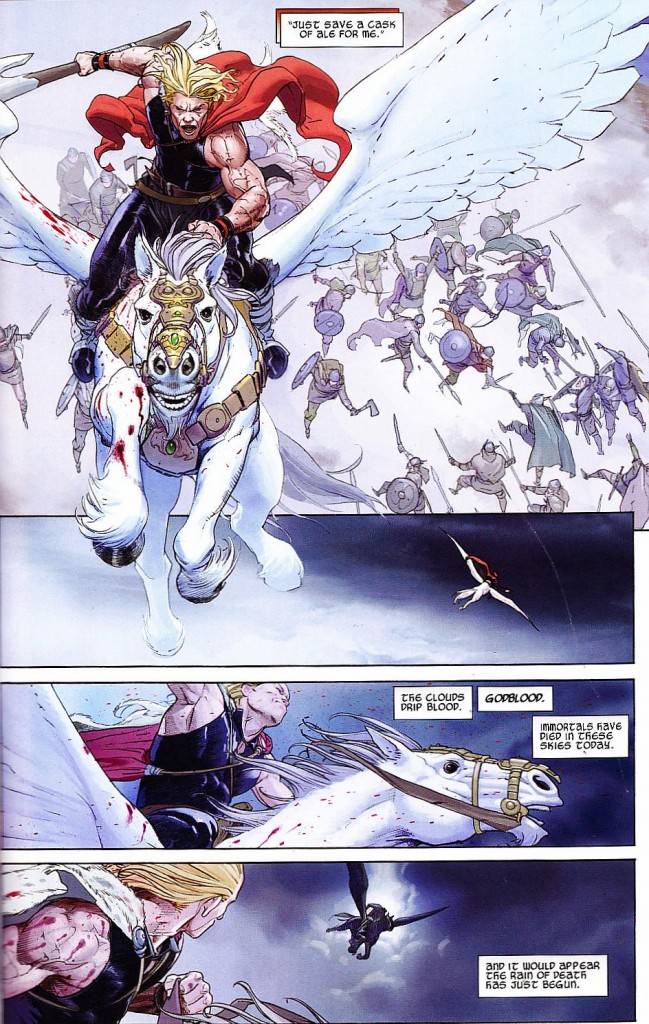 It’s a cracking tale, perfect Thor-fodder, mixing high fantasy with ancient myth, just as Thor should. And it’s engrossing, remorseless; we’re driven along, even Thor, by the pace and demands of the relentless God Butcher, chase, pursuit, evasion, battle. But there’s more than hunt and action here, there’s a theme about the nature of gods and those who worship them, and of belief itself, of faith but also hubris. What they are, what mortals think they are and what the gods believe of themselves, and how this shapes the realities of many mortal species on endless worlds.

In one scene we see a brave group of Viking warriors attempt to rescue Thor from the clutches of the God Butcher, who is enraged by the fact that even now these warriors will fight in his name, that they won’t see him as defeated but instead fight to the last to free him. Bravery or faith (real or misplaced)? Both? It’s a fast-paced, visceral (sometimes literally) story, well-constructed, immersive, with both Aaron and Ribic clearly relishing the story (which itself sounds like it belongs in the old Sagas) and in getting to show such different aspects to Thor across the ages. The later volumes expand on this mix of fantasy and myth and draw the reader in even deeper. Thor isn’t always the easiest character to do properly, to balance enough realism against the mythic and fantastical, but here it is done perfectly. One of the finest Thor series in years and, if you’ve been meaning to get back into the Thunder God for a while but were not sure where to start, here is your perfect way in. 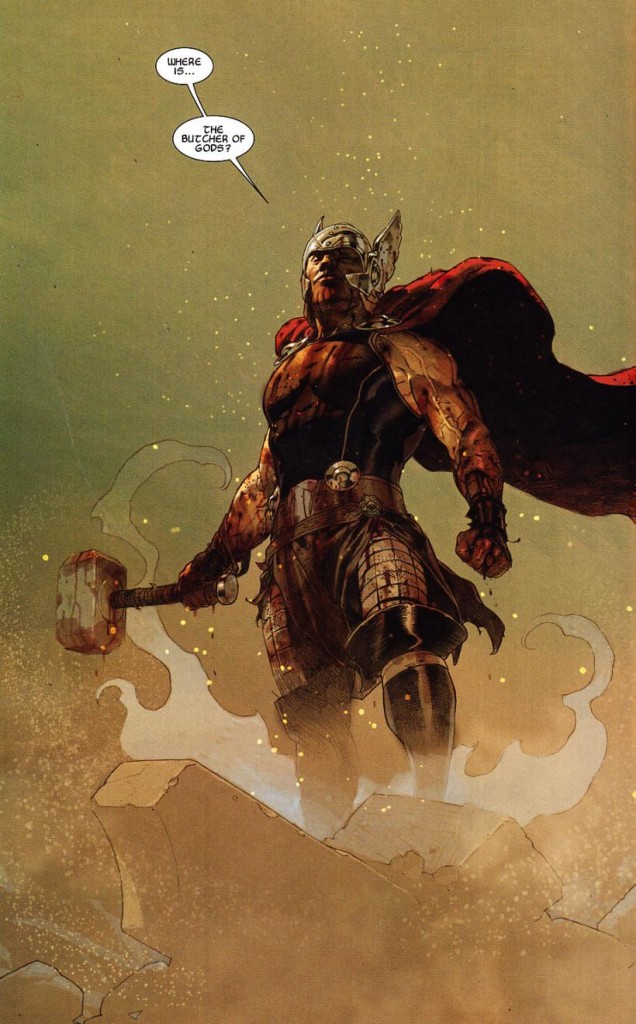 (* = okay, he’s not the god of rock and roll, but some of us can’t say line “god of thunder” without adding that line)