“Possibly the most moving piece is the final one of the book, Joe Gordon’s impassioned prose ‘Memorial to the Mothers‘ illustrated by Kate Charlesworth. A simple reminder that for every male name we see on a war memorial there was at least one other wounded person, the mothers and wives who bore the terrible brunt of the criminal throwing away of their loved ones’ lives. Apart from this there was nothing in the volume that quite reached the heights of Mills and Colquhoun’s Charley’s War, or Jacques Tardi’s It was the War of the Trenches for me.”

Eamonn Clarke writing about World War One comics anthology To End All Wars in Everything Comes Back to 2000 AD, and, in the above quote, more specifically on my own story in that collection, edited by Jonathan Clode and Brick. I’ve fiddled with stories pretty much all my life, on and off, but after we lost my mum so suddenly several years ago I lost any urge to write narratives. I was still writing professionally with articles, interviews and reviews, but the spark that made me want to write stories, even if they never went anywhere other than my own blog, had gone out. Two years ago Brick asked me if I would put out a call on the Forbidden Planet Blog that they were looking for writers and artists to submit stories for consideration for a charity anthology they were compiling, as an antidote to some of the bollocks we all knew we would be said in relation to the centenary of the start of the Great War. During this Brick saw one of my many photos I snap around town, this one of an unusual war grave, just moments from my flat in Edinburgh, a father and son, father fallen in the War to End All Wars, his lad in the world war that followed it…

Brick commented there was a story behind that and maybe I should try my hand at submitting something for consideration myself. At first all that sprang to mind were fairly cliched stories, and I wasn’t interested in that. I wanted something different and above all I wanted emotion. If I couldn’t make at least some of the readers feel chocked up reading it then I wasn’t inteersting in writing it. What good is a story that doesn’t evoke an emotional response? All art should create emotion. And given I was using real people and their loss as inspiration, it had to evoke emotion or it simply wouldn’t be right. An idea came to me, that apart from the father and son there was another name that should be on there, as much a casualty as any soldier: the wife and mother. Her husband then her boy taken from her by this insatiable beast of War that even supposedly “civilised” nations consider an adequate way to conduct themselves. And from that, by extension, every war memorial in the world with their engraved names also should have behind them the names of the mothers of the fallen. 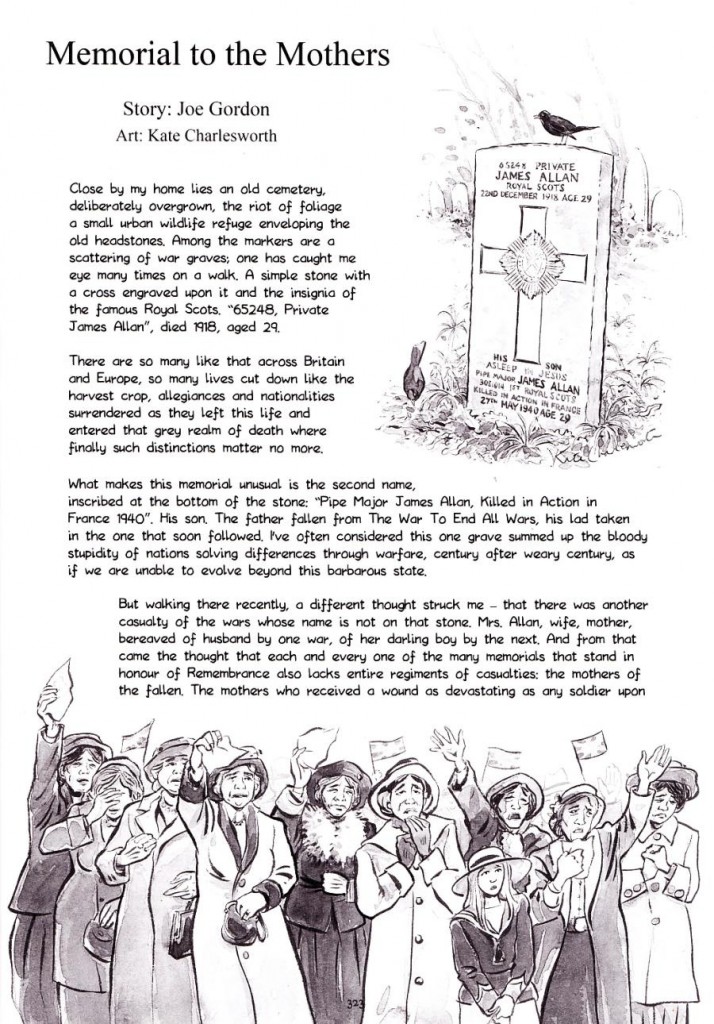 And there was my emotional ‘in’ to the story. I started writing, for the first time since we lost mum I started writing a story and I think I poured my own sense of loss and grief into it. But to be honest I wasn’t sure if it would mean much to anyone other than me, but Brick and Jonathan liked the emotion in it (in fact among their editorial notes they said don’t hold back, pour it all in, so I did). The collection was published this summer by Indy comics folks Soaring Penguin Press, with £2 from each sale going to Medecins Sans Frontieres, the medical charity (currently dealing with victims of war zones and Ebola, so let’s face it, they need every pound they can get) and I have been pleased at its reception. Also as someone who has been involved with the Edinburgh International Book Festival for years it was pleasing to be there chairing talks and see, for the first time, a book I had a part in being on sale in their bookstore. And I loved the art my partner in crime Kate Charlesworth came up with for the story (Kate also did the art for one of my favourite books of 2014 with Mary and Bryan Talbot, Sally Heathcote, Suffragette). Have seen some nice mentions for the collection but have to say I’m pretty damned happy at Eamonn’s comments on mine and Kate’s piece in the collection. It’s not why we do these things, but it’s still pretty nice to see we reached someone. Several moths ago Pat Mills commented to me that he enjoyed the emotional depth of the story, and since I have been reading Pat’s stories since I was a kid that pretty much made my week, and now seeing it compared to the emotional impact of Pat’s astonishing Charley’s War and Tardi (another of my comics gods) and his WWI stories is pretty damned pleasing.