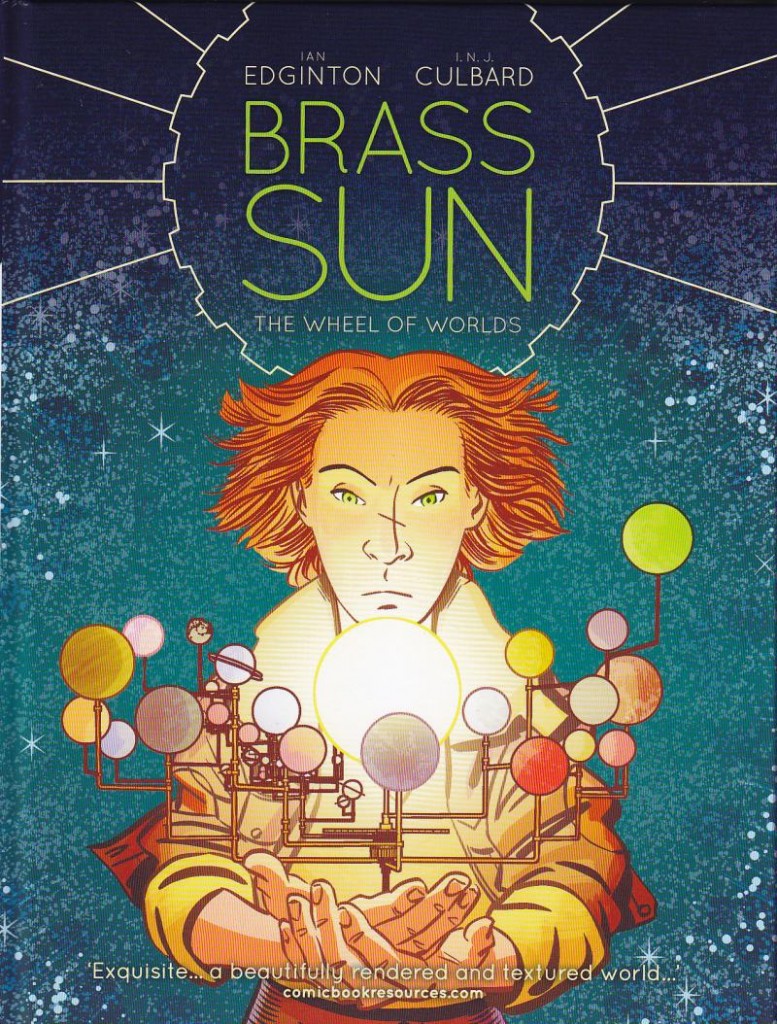 “A thousand times a thousand years ago the Blind Watchmaker set the wheel of worlds upon the firmament. And upon those worlds he set the lost tribes of man. Each planet and populous were tasked with their own form and function – each a fine movement. A celestial increment within the greater machine.”

For me, ever since I first saw one in a museum as a very young boy there has been something enchanting about an Orrery, those beautiful, intricate old clockwork and brass moving models of the solar system, little brass and copper planets rotating around a brass sun, tiny metal moons around the planets, each orbiting in their own path and time. Of course cosmology has moved on and today we are confronted by a universe that seems infinitely more complex, and we’ve barely scratched the surface of even our tiny local neighbourhood of it all. And yet that relatively simple clockwork, moving model of the solar system still holds a certain magical fascination, all the heavens displayed at a human scale, in a simple, ordered fashion even a child can understand. Now take that child-like fascination and scale it up – right up – to planetary levels and we have The Orrery, an actual series of real worlds set on their metal rings to orbit their sun like the clockwork model.

It’s a simple but utterly dazzling and wonderful notion and right from the start it affords us some truly glorious science fiction artwork as Ian Culbard delivers achingly beautiful splash pages, from the intricate cogs of the clockwork mechanism (and even in our day of digital tech and touch screens, isn’t there still something delightful about moving machinery of intricate clockwork?) and then pulling back to show us this astonishing solar system, all the little worlds mounted on their stands and rotating around one another and their sun on a clockwork system of wheels and cogs and gears (you can see a preview on the blog here). I think I fell in love with this story right at that early point.

Now imagine that this clockwork solar system is slowly winding down, the environment in the worlds is changing. Like our own world they face environmental change and possible collapse, and like too many in authority in our own world some are ignoring the facts, or in the religious world young Wren lives in, any attempt to use science to examine the changes and devise a plan is seen as heresy, leading to a death sentence. But in the best traditions of the epic quest tale this young woman is about to be catapulted onto an immense journey, and the fate of all these clockwork worlds will be in her hands, as her grandfather, once the high priest, now secret scientist, entrusts her with the knowledge he has gleaned and, as things fall apart on their world, sends her alone, fleeing, beyond all that she has known. 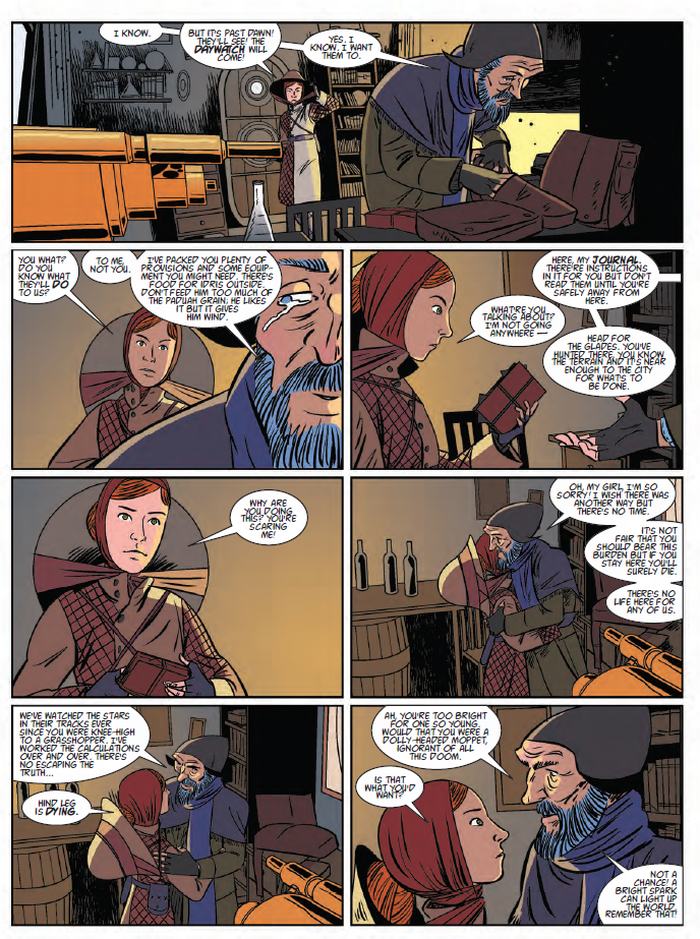 Wren finds herself “riding the rails” – the connecting spars that make up this gargantuan Orrery, engineering spaces from its construction, and fortunately for her she meets some of the few who still attempt to study and maintain it, engineers, and a young apprentice befriends her and, again in finest quest tale tradition joins her, the pair travelling further and further, seeking the broken parts of a key her grandfather thinks can fix the slowly declining Orrery, all the time wondering about the nature of the “Blind Watchmaker” who may, or may not, be the creator of this entire, amazing series of interlinked worlds.

I was reminded several times of Ursula Le Guin’s superb Earthsea, not the story so much, but rather the small, different but connected worlds of Brass Sun putting me in mind of the archipelago of islands from Le Guin’s wonderful fantasy classic, while the adventure and quest elements are familiar from any number of fantasy tales, not to mention the original myths which fed those fantasies – an epic-scale journey into the unknown, dangers on all sides, finding new friends along the way who will be true no matter what (and how their emotional bonding also bonds the reader to them, invests us not just in the big-scale wonder of the tale but in the person-level emotions), and how Wren will have to change and grow on her journey, as all the best heroes always have to . 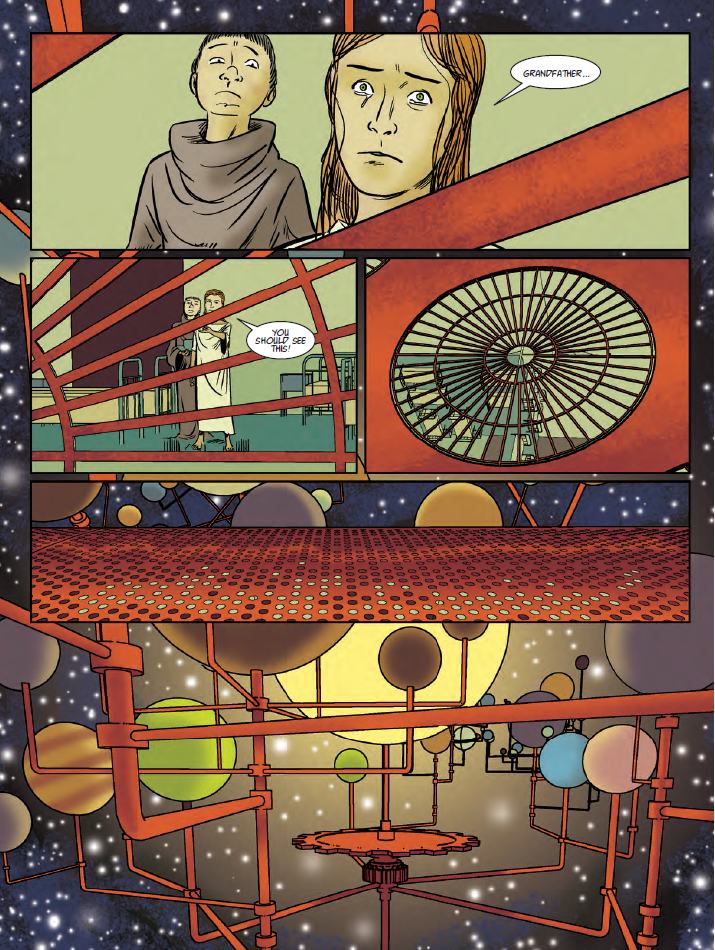 It’s an achingly gorgeous looking piece of Clockpunk science fiction, and we’ve raved about it as we followed the serialisation in the pages of the much-beloved stalwart of Brit comics, 2000 AD (almost four decades on and still nurturing new work like this). But it’s not just the beauty of the art and the concept, it is a cracking adventure tale, a magnificent quest for our young, untried heroes, who are going to have to grow up fast and face all sorts of challenges, some physical (dangerous environments, nasty people trying to kill them, many now ignorant of how the Orrery was created, or of the other worlds), some mental (the sheer challenge of continuing on into the unknown, the burden placed on such young shoulders), some metaphysical (religion, science, both dealing with the nature of belief and what happens if those beliefs prove to be wrong), and with a subtle message about managing our own environment. 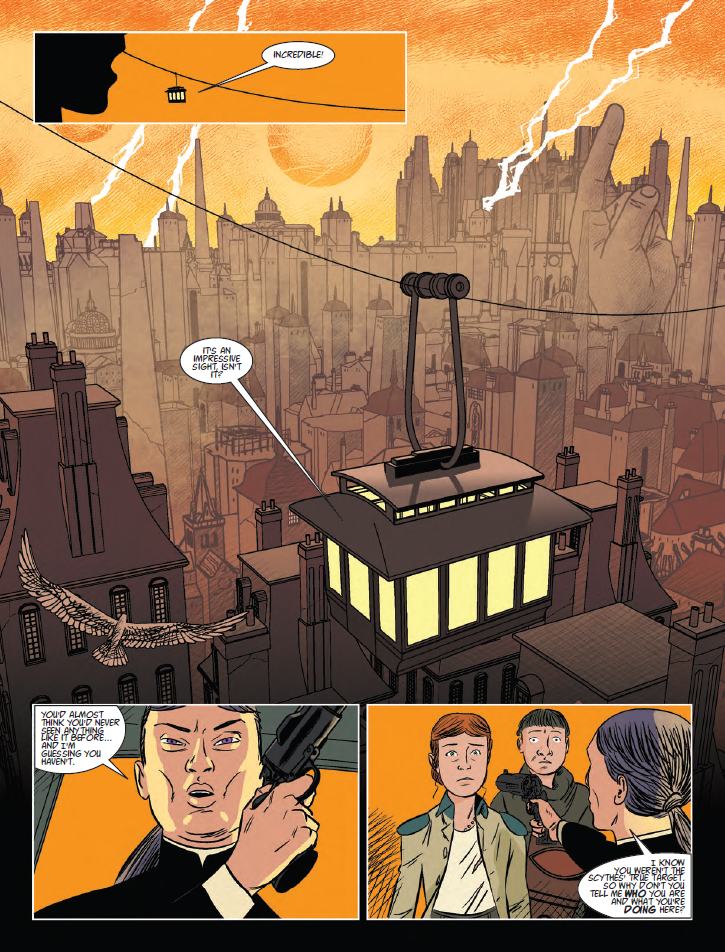 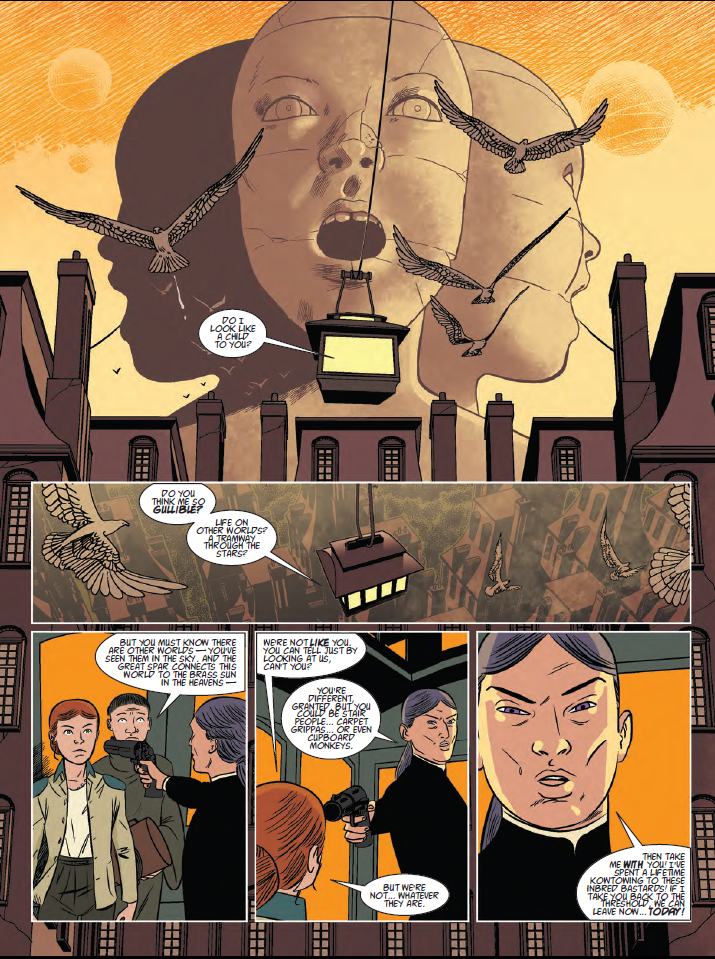 It is a tale to let yourself fall into, to become hopelessly entangled into it until the Orrery and its characters feel almost real to you (just all the best quest tales have always done, drawn us so very deeply in until we feel we are part of their epic journey). And oh, that glorious artwork. I’ve always held that science fiction and fantasy delivers one quality more than any other literary genre: the sheer sense of wonder. And here Edginton and Culbard will fill your head with wonder and beauty and danger and daring. One of the finest series of the year, now collected into a handsome hardback edition, an absolute must-have. As I said, a story to let yourself fall in love with.