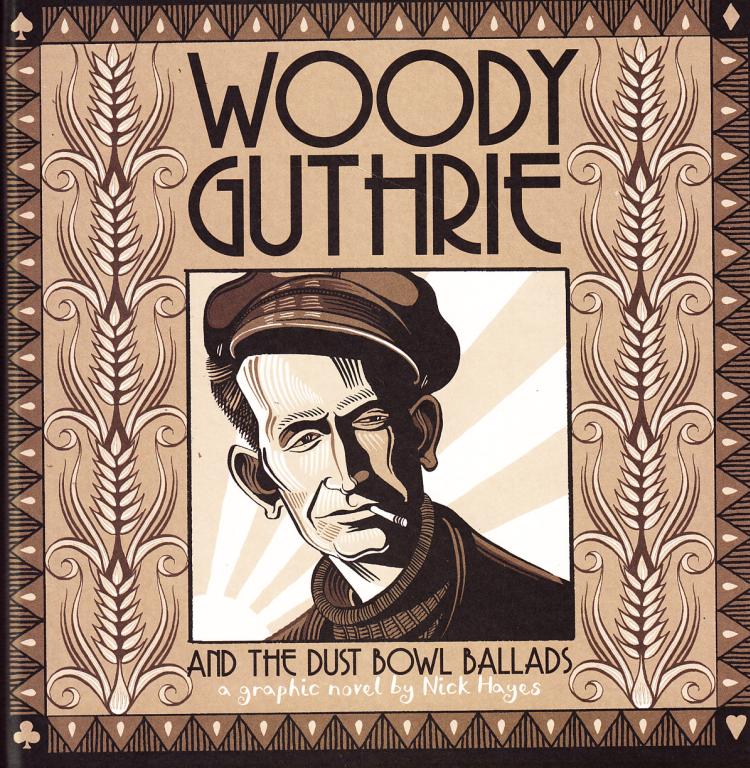 Guardian cartoonist Nick Hayes made his graphic novel debut a couple of years ago with the intriguing – not to mention large – Rime of the Modern Mariner, an interesting contemporary riff on the classic Coleridge poem with a strong ecological message and some amazing artwork and use of pacing and rhythm. This, his second full-length work, follows Woody Guthrie, arguably one of the most famous and influential folk musicians of the last century, and a lasting influence on many later artists (not least Bob Dylan), but this is no straightforward biography told in comics form. No, what Hayes does here is more interesting than a straight biographical narrative – this is about the man, yes, but it is even more about the events and times that made him and shaped the music he sang throughout the land, criss-crossing the vast landscape of America, riding the box-cars with hoboes and with men seeking any place that had work and the promise of a better life during the heart of the Depression.

The art is mostly in a mixture of browns and coppers and beiges, recalling an old sepia photograph, and very stylised, sometimes Woody and other characters looking fairly cartoony, in other scenes the artwork looks almost like an old woodcut, and it ranges from depicting the miserable suffering of the twin economic and ecological disaster of the Dust Bowl and Depression, or the desperation of the shanty towns in and around most large American cities full of the poor looking for work that just wasn’t there, in their ‘Hoovertowns’, named after the president on whose watch these disasters happened (the shanty towns contrasting with the new gleaming skyscrapers making their early appearance on the skyline). 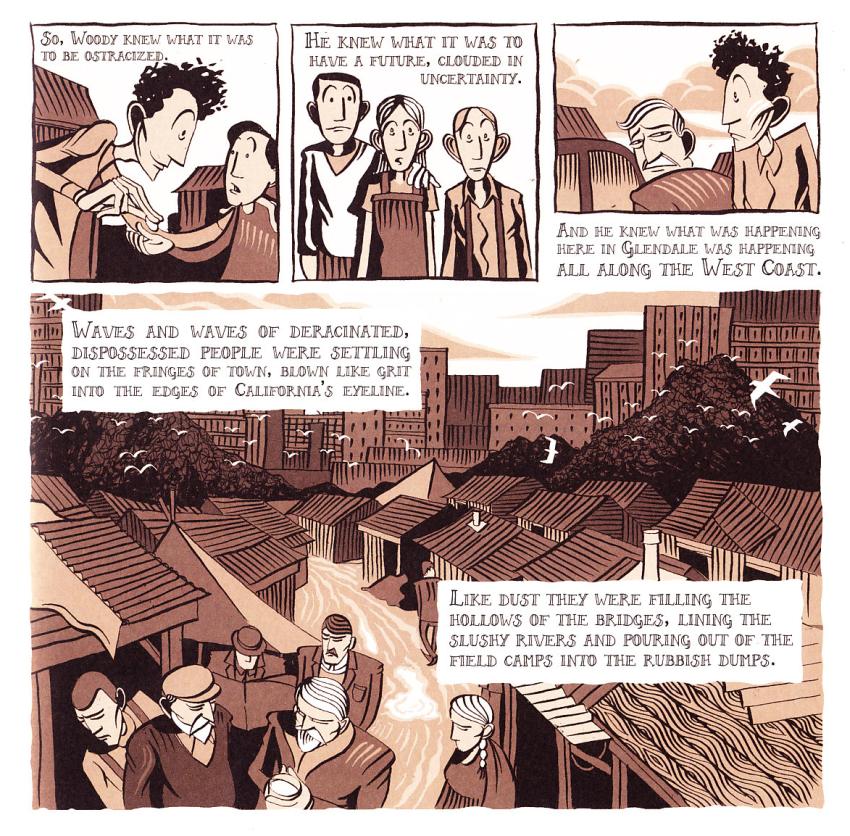 It’s scenes we know from Steinbeck and the Grapes of Wrath and a thousand photographs, but here Hayes works it directly into how Woody is shaped, passing through all of this, seeing men like his father go from respected, well-off successful businessman to menial work just to hold his head above water, and knowing that was better than millions could manage. No work, mass unemployment, homes and farms being foreclosed on by banks which themselves had overstretched and failed helping to create the crisis in the first place then blaming their customers for not being able to repay those mortgages and loans. It all has far too much resonance to our own troubled times since the global financial meltdown, caused, ironically, in part by a lifting of the regulations on banks and finance that were brought in after this Great Depression to stop it happening again.

But this isn’t just a walk through the horribly dust-blown suffering of those who lost everything, who tried to believe in the American Dream, that they could always move on, start again, make something of themselves then, by the million, often through no fault of their own, because of powers beyond them that could ruin their lives from afar, finding themselves destitute. While Hayes does show this suffering and desperation and how it fuels Woody’s lifelong rage at social inequality and injustice, he shows hope, he shows traditions, many brought over from the old countries, this being the early part of the 20th century when many Americans were only a generation or two off the immigration boat. 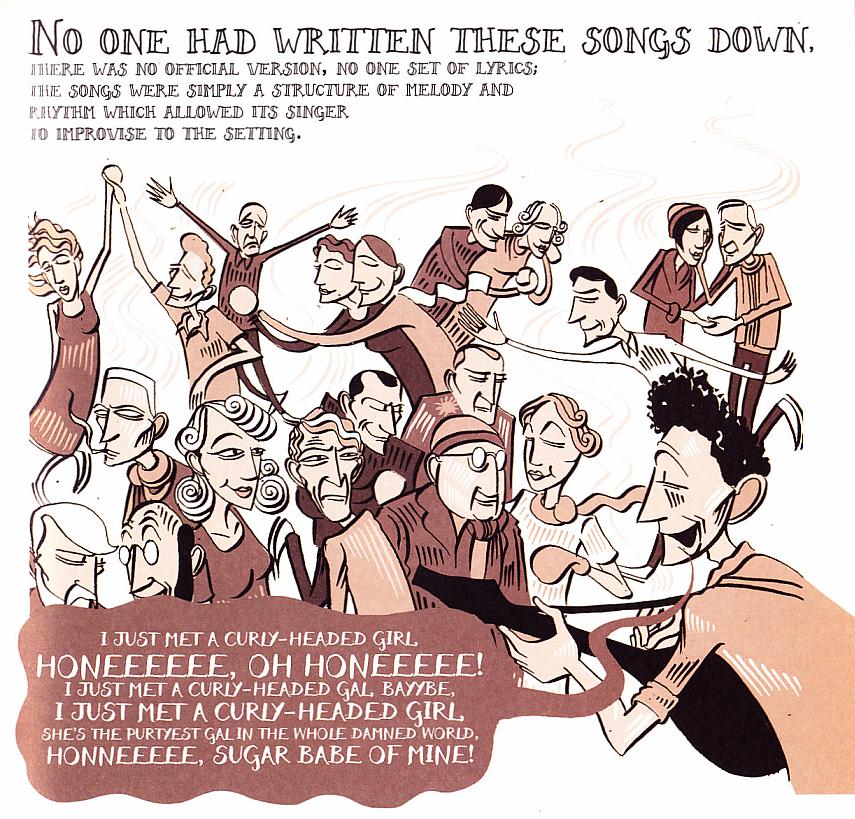 And among these traditions, songs: the shared common folk-songs, rarely written down, passed along, known by all, the communal cultural heritage of the many, telling of their own times and those of their predecessors. Woody takes these, fascinated by the stories they told, the way the songs gave voice to a poor mass of the population that would otherwise be silent, preserving their sense of identity and culture in the face of all disasters (a history for those who don’t usually get to write their own histories, preserved instead in ballads shared among the community, generation to generation) and offering little moments of joy in the misery, all singing and dancing in a local hall, troubles forgotten for a night.

“Son, down here we own the land like a hand owns its body. It don’t belong to us. We belong to it. The land was here long before we came and will be here long after we’re gone…” 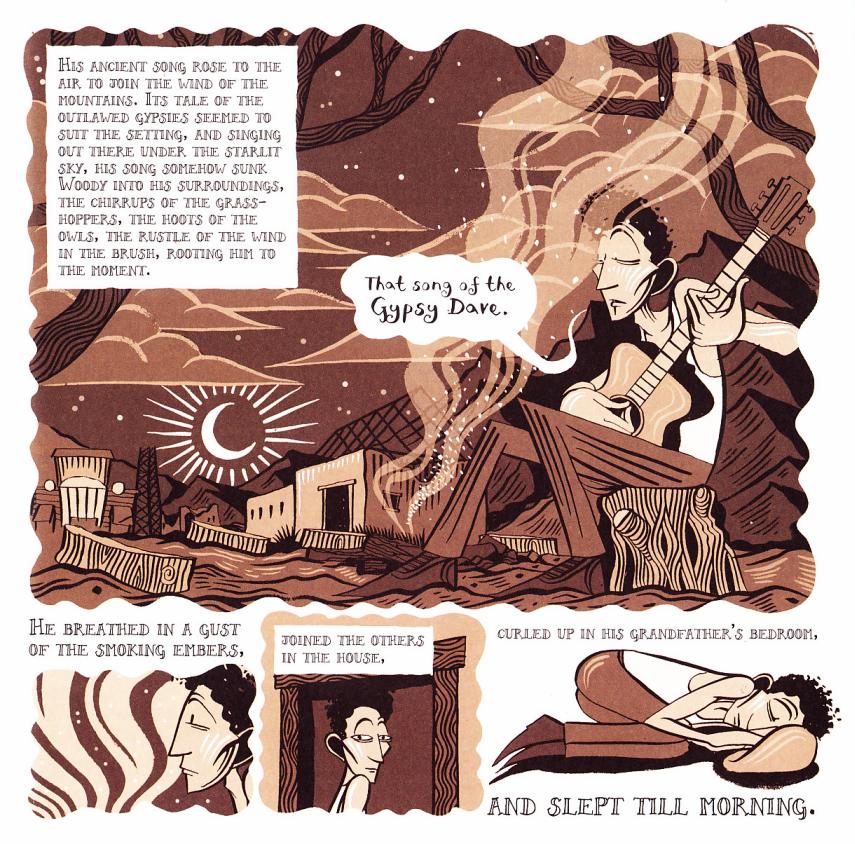 Into this political-financial-ecological time of disaster Hayes also weaves a much more fantastical element, contrasting the lines closing off tracts of that vast continent, both the physical lines of fences (no trespassing, private property, keep out) or the ones on paper (bank records, congratulations, you’ve bought all this land and can do what you want, eject who you want). Hayes contrasts this with that great Westward Expansion dream that powered the previous century in the US, the seemingly endless land to be exploited (until it is over-exploited, as with the Great Plains, ancient ecology ruined without thought leading to Biblical levels of disaster) and the horizon forever free, and those astonishing landscapes, from the Great Plains to the stunning deserts. He shows the ‘patriotic’ songs of the period, which strangely enough tend to be popular with those who have done well out of the system, grasping at everything to make it turn a dollar, the 1920s and 30s version of the “1%”, even the land commodified. And out of those he starts to fashion his most famous song, “this land is your land, this land is my land…”, both song and book contrasting the promise, the dream of that astonishing, vast, continent with all its resources and space, everyone on a seemingly equal footing, except of course they’re not, there are always the smaller groups who control it all, but the dream of that freedom to be and do what you want and to make something of yourself is still there.

It’s about history, it’s about the exploitation of the many by the small elite, it’s about financial and ecological disasters and how the two are often entwined, but it is also about the music and the people, and how you can’t separate the two, how the music is made by the people but it is also a part of them and shapes them, their sense of who they are, where they came from, giving them strength to struggle on, inspire them, keep them going, tell their story. A beautiful work, beautifully executed, with enormous relevance to our own very troubled times. Stick on a best of Woody Guthrie CD then sit back and read it.